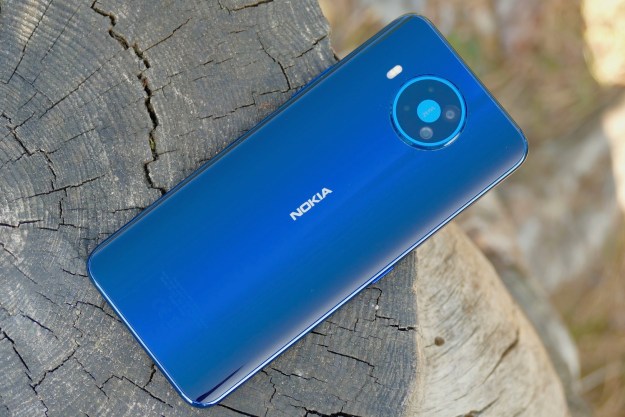 “A wonderful camera and a long-lasting battery make the Nokia 8.3 desirable, and the Android One software updates and 5G make it a safe buy for the future.”

There was once a time when Nokia ruled the phone camera world, but Huawei, Apple, and Samsung have all come along and become better known for amazing cameras since that time. However, with the Nokia 8.3 it has taken some significant steps forward with the help of long-time partner Zeiss, to the point where I think the phone deserved to wear the famous PureView name, traditionally given to its best performing camera-centric phones.

What’s even better is the phone doesn’t cost $1,000, and yet still comes with tech you need for the future, and guaranteed software updates for a good few years as well. The Nokia 8.3 one of 2020’s best competitively priced phones, so let’s get into why.

You know what you’re getting with Nokia’s most recent designs as they mostly follow a similar trend: A top-center mounted camera module, a chin bezel under the screen, and colors inspired by its Nordic roots. The Nokia 8.3 doesn’t shout about its looks, doesn’t bowl you over with attention-grabbing folding screens, and there isn’t much emphasis on keeping the weight or thickness of the hardware down. The 8.3 is therefore a modern Nokia phone through-and-through.

It’s 220 grams, 8.9mm thick, and 78.5mm wide so it’s a hefty chunk of a phone in your hand, at least compared to the OnePlus 8 and the iPhone 11. The side-mounted fingerprint sensor is a great decision ergonomically, as it stops you having to juggle a heavy phone while locating an in-display sensor, plus it’s accurate and responsive. The Polar Night color is deep blue, almost black in places, until you get it into the light, when streaks of azure catch the eye. It’s classy and stylish, and stops the otherwise quite ordinary phone from becoming dull.

Bad parts? I really don’t like the Nokia logo on the bottom bezel, I dislike the Google Assistant hardware button because I accidentally press the stupid thing, while the flat screen and glossy back means the phone slides across most surfaces like it’s on wheels. This said, it does feel a little pointless nitpicking at the Nokia 8.3’s design when it’s definitely not ugly, and the build and materials used are excellent.

Here’s what you need to know: The Nokia 8.3’s camera is brilliant. No caveat is really needed either, it would be a brilliant smartphone camera if it was on the back of a phone that cost a lot more, too. It wears the PureView name on the spec sheet, but it really deserved to have it in the official name, as its talents are quickly accessible and it takes consistently excellent photos in most conditions, unlike the often disappointing Nokia 9 PureView from early last year.

It has a 64-megapixel main sensor, a 12MP sensor with an ultra-wide lens, plus a pair of 2MP sensors for depth and macro duties. On paper this isn’t that impressive, but the results are stunning. Photos are drenched in rich colors and filled with pin-sharp detail, and crucially pack an emotional punch. By this I mean nothing gets too saturated or over-enhanced, letting the photograph speak for itself, but without losing the visual pop needed to make pictures instantly shareable.

HMD Global’s ongoing partnership with Zeiss undoubtedly makes a difference to the performance, and its success here reminds me of how Huawei and Leica really came together to produce the superb Huawei P10. There’s a simplicity in its use, too. You have a wide-angle and a standard view, plus a Night mode, and that’s all you should trouble yourself with. Selfies are great, especially using the Zeiss-tuned filter modes which gives a really cool look to your photos, and although it’s software driven, the bokeh mode has good edge detection.

Is it perfect? No, but its downsides don’t outweigh the positives. There’s no zoom feature, the 2MP Macro mode is rubbish, and the camera often generally struggles with focus when working close up. The app annoyingly stays in Portrait mode when you return to the app after closing it, instead of defaulting back to standard photo mode, and I did get some unattractive haloing and lens flare sometimes.

Dig deeper and the Night mode is very effective provided it’s not very dark. It reveals a lot more texture and detail, much as Night mode once did on Huawei phones like the P20 Pro. The Zeiss-enhanced portrait mode produces a very strong bokeh effect, but this can be adjusted after you’ve taken the photo. There’s an editing suite for the manual Pro video mode, too, where anamorphic-style lens flare can be added to your videos. If you shoot your video expecting to do this later it can look effective, but if you don’t, it just looks artificial.

The Nokia 8.3 has the easy, pick-up-and-shoot usability of the Google Pixel 4a, and shoots photos that will make you want to get creative and experiment with it more.

It’s a 6.81-inch IPS LCD screen with a 20:9 aspect ratio, and Nokia’s “PureDisplay” technology on the front of the phone. PureDisplay enables always-on HDR, adaptive brightness, and enhanced color accuracy and sharpness. I did find the adaptive brightness to be poor though, particularly when it turned the brightness right down in bright sunlight so I couldn’t see the screen at all.

Watching video is delightful, with some amped-up colors and contrast with PureDisplay switched on, or a more natural palette that’s closer to the iPhone 11 Pro’s look with it switched off. The single speaker is acceptable, but it doesn’t excite with its sound. There is a 3.5mm headphone jack on the body for wired headphones if you prefer.

While the screen is colorful and pretty, it does lack a 90Hz or higher refresh rate that’s very much expected at this price. I notice this immediately after coming from a device with a higher refresh rate — the scrolling simply isn’t as smooth on the Nokia — but if you haven’t had the feature before, obviously the switch won’t be so jarring. However, it’s a feature that’s on several competing phones and almost all flagships, and it does improve viewing and lessen fatigue, so it’s missed here.

Qualcomm’s Snapdragon 765G processor drives the Nokia 8.3 with either 6GB or 8GB of RAM, and 64GB or 128GB of internal storage, depending on the model you buy. There is a MicroSD card slot to boost this number, too.

The Nokia 5.3 has 5G, although I do not live in an area with coverage so could not test this feature. To get a little technical, the Nokia 8.3 supports more 5G bands than any other currently available 5G phone, and supports NSA (non-standalone) and SA (standalone) 5G systems, so when 5G is more widely available the phone will happily connect to the network. 4G reception is strong, and call quality is really excellent. Oddly though, during video calls you can’t turn the volume down below a certain point, so it’s impossible to mute the sound entirely.

Here are the benchmark results:

Comparing it with the LG Velvet, the OnePlus Nord, and the Motorola Edge, which have the same processor, the Nokia improves on the 3DMark score, but can’t match the Geekbench 5 score on either. It cannot reach the scores achieved by the OnePlus 8, which has a Snapdragon 856 processor and more RAM. Gaming is fun, however, and I didn’t experience any performance problems or excessive heat when playing Asphalt 9: Legends.

Another triumph on the Nokia 8.3 is the use of Google’s Android One software. It’s essentially the same experience as you get on a Pixel phone, with a clean, clear, logical, and consistent design, plus solid reliability when it comes to running apps and doing your everyday tasks. There are a few tweaks needed to make it better, from the adaptive brightness to the oddly inconsistent volume control, but otherwise it facilitates a pleasing, stress-free mobile life.

Yes, I said life, because a big advantage here is Android One will have major system updates for the next two years, and security updates for the next three, all of which will arrive in a timely fashion. You shouldn’t need to think about software updates when choosing a phone, but they’re very important, and HMD Global’s decision to use Android One means you can go in worry-free.

A fingerprint sensor is built into the power key on the side of the phone. It’s ergonomically comfortable for me as a right-handed person, and it has proven accurate and mostly reliable, too. The phone is powered by a massive 4,500mAh battery, and over the course of my first days it has easily proven to have the guts to last two full days with moderate to high use. You’ll find an 18W charging block in the box, but the phone does not support wireless charging.

The Nokia 8.3’s pre-order date is September 23 in the U.S., and September 22 in the U.K. and Europe, and it will ship from October 8. Available from Amazon in the U.S. the phone costs $699. In the U.K. it costs 499 British pounds, and in Europe it costs 599 euros. The phone is available through Nokia’s own website.

Its excellent camera puts the Nokia 8.3 alongside several competitively priced desirable smartphone successes like the Pixel 4a (or more importantly, the forthcoming Pixel 4a 5G), while the long battery life and clean software makes it easy to live with now and in the future, something increased further with the inclusion of 5G. This is what we expect from Nokia: A long-lasting smartphone with a great camera, that isn’t ostentatious in its design, but instead emphasizes value, build, and overall everyday usability.

The midrange smartphone market is one of the most varied and competitive, so there are plenty of alternatives to consider. The $599 LG Velvet is more attractive, but the camera is inconsistent, while the $500 Motorola Edge looks great, too, but the software won’t be updated for nearly as long as the 8.3. The OnePlus Nord is an option for anyone in the U.K., where it costs as little as 379 pounds, and delivers much of what makes the Nokia 8.3 successful, including the great screen and performance.

The better alternatives are the $349 Google Pixel 4a, which has all the same upsides as the Nokia 8.3 at a lower price, only missing out on 5G — though the larger Pixel 4a 5G, which is set to be announced on September 30, will fix that. Or, spend $699 for the OnePlus 8 with its prettier design, good software, 5G, and higher-performance processor.

It’s going to last you 3 years or more, depending on your demands. The software updates are crucial to the longevity, as is the wide 5G support. The phone is not water resistant or rugged though, so you’ll have to be careful with it. This is unfortunate, as LG manages to add both IP68 and military grade toughness to the Velvet for a similar price.

Yes. Competition is strong, but if a solid camera, good software, and minimalist hardware are more important to you than a high refresh rate screen, the Nokia 8.3 is a great buy.