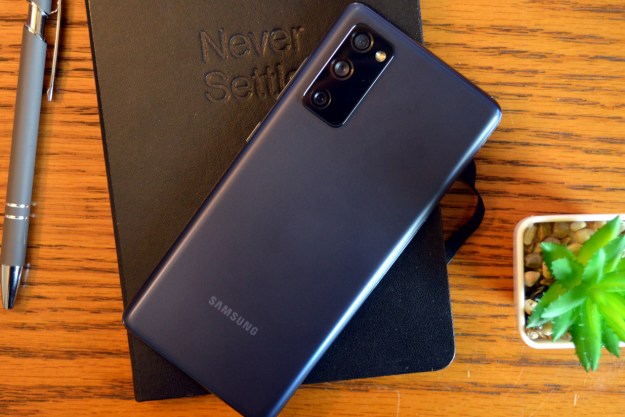 “Most of the great Galaxy S20 experience, for hundreds of dollars less -- that's a winning combination.”

There’s no getting around it — phones are getting really expensive. But as flagship devices get increasingly pricey, a whole new segment of the market has popped up: The premium midrange. That’s exactly where the Samsung Galaxy S20 Fan Edition lives, and if you’re looking for a premium Samsung experience without paying an arm and a leg, it’s one of the best Android phones.

The name “Fan Edition” doesn’t really describe what the phone really is. A better name would be the Galaxy S20 Lite. You’re not really getting everything that the Galaxy S20 has to offer. But you’re getting all the important stuff, with a few added bonus features along the way, with an enticing price cut.

It’s clear that the Galaxy S20 FE is a derivative of the original Galaxy S20 — it looks just like the standard device. But it’s also made from slightly different materials. Gone is the glass back, in favor of the plastic back found on the standard Galaxy Note 20. But while in theory it’s not as premium, I actually kind of like the soft-touch feel it offers, and I didn’t really miss the glass.

The device also sets itself apart from the standard Galaxy S20, in that it’s available in a larger range of colors. I’m reviewing the Cloud Navy model, but it’s also available in more interesting colors, like Cloud Red, Cloud Lavender, and Cloud Orange. Safe to say, there should be something there for everyone.

The rest of the phone’s design is pretty standard fare. There’s a USB-C port on the bottom, a volume rocker and power button on the right, and a rectangular camera module on the top left of the phone’s back. It’s not as thick as the Galaxy S20 Ultra or Note 20 Ultra, which is nice to see, but obviously, you also won’t get the same camera specs as the more expensive phone. We’ll get into that later.

The Galaxy S20 FE is actually a little larger than the standard Galaxy S20. While the original device has a 6.2-inch display, the S20 FE has a larger 6.5-inch display. Also unlike the Galaxy S20, this phone has a 1080p resolution. It seems that the high resolution is a feature Samsung wants to reserve for its pricier devices.

It’s still a great-looking display though. It’s a Super AMOLED display, and it has an impressive 120Hz refresh rate, just like the other S20s. The result is an extremely smooth-feeling experience, and a display that’s very responsive to touch. We’re hoping that more phones get high-refresh rate displays over the next year or so, but until then, it’s pretty impressive that a $700 phone sits in at 120Hz. It also beats competitors, though only marginally.

The most obvious competitor here is the OnePlus 8, which also has a 1080p resolution, but caps the refresh rate at 90Hz. (The forthcoming Google Pixel 5 will have a 1080p 90Hz display as well.) To be clear, the difference between 60Hz and 90Hz is much more immediately obvious than the difference between 90Hz and 120Hz. But for those that can notice a difference, 120Hz will be appreciated.

It’s also important to note here that the display is flat, not curved. I kind of like the look of curved displays, but others disagree. In any case, considering the flat display, you shouldn’t run into as many issues surrounding accidental palm presses.

While Samsung has made clear compromises in the design and display, it hasn’t really under the hood. You’ll still get a Qualcomm Snapdragon 865 processor in the U.S. 5G version, or an Exynos 990 outside of the U.S., coupled with either 6GB or 8GB of RAM — and as a result, the phone will easily handle everything you can throw at it in 2020 and beyond. That includes productivity apps, mobile gaming, and so on.

Predictably, the phone handled games like Call of Duty: Mobile with ease, and multitasking with even four or five apps is no problem. Benchmark results confirm the great performance in day-to-day use. Here’s a rundown of the results we achieved.

These results don’t quite reach the heights that we achieved with the OnePlus 8, but they’re close, and in real life, you won’t really miss the extra 20 single-core points on GeekBench 5. Also, we’re reviewing the lower-end 6GB RAM model, so upgrading your RAM might be the way to go if you really care about that performance edge.

Gone are the days when incredible cameras were reserved for the best of the best phones. With devices like the Google Pixel 4a, phone makers are getting wise to the fact that people who spend $450 or more on a phone should be able to get a premium camera experience. While you don’t get the same levels of zoom quality as you do on Galaxy Note 20, or the same resolution main sensor as on the Galaxy S20 Ultra, the Galaxy S20 FE still delivers a versatile, high-quality camera experience.

The phone offers three camera sensors, including one 12-megapixel standard sensor, one 8MP sensor with a telephoto lens, and one 12MP sensor with an ultra-wide lens. I really appreciate that, and while some prefer either a telephoto or ultra-wide over the other, simply having both means that the camera is useful in all kinds of situations.

On paper, the specs aren’t quite up to the standard Galaxy S20, but photos seemed to be pretty much as good in day to day use. They’re still colorful and crisp, with enough dynamic range to make for a punchy photo, but not so much as to wander into unnatural territory. These days, photo quality may have more to do with post-processing than sensor quality, so it makes sense that the slightly inferior specs don’t really make for much worse photos than the Galaxy S20.

In low light, photos are pretty good. As is expected, really low light photos can get noisy, but generally speaking, the phone is good at capturing enough detail to make for decent shots. The same is true of really zoomed-in photos. The telephoto camera offers 3x optical zoom and up to 10x digital zoom — and as a result, you’ll get up to 30x hybrid zoom. Photos at that level of zoom aren’t as crisp, obviously, but Samsung has been seriously investing in cleaning up zoomed shots on its photos, and it shows. The 3-10x shots are solid, but you’ll rarely care to use 30x.

The selfie cam looks pretty solid too. The front-facing camera is 32MP, and it doesn’t have the dual phase detection autofocus found on the original Galaxy S20, but it still captured colorful selfies with more than enough detail. The higher resolution selfie cam is here for a reason — when you’re not using the wide-angle sensor, it really just crops the image, and as a result, the photo is just lower resolution.

One feature that is missing from the Galaxy S20 FE is the ability to record video in 8K. That’s because you need a higher resolution camera to do so. Still, the camera can record 4K video at 60 frames per second, which should be more than enough for most, and will save you from maxing out your storage.

Powering it all is a 4,500mAh battery, which seemed to be able to get through a full day of use without issue. I ended a day of heavy use with around 20% of the battery remaining, which isn’t a ton, but it’s still fine. If you’re used to charging your phone every night, you shouldn’t have any issues.

Thankfully, the phone is easy to charge too. Unlike the OnePlus 8, this phone does support wireless charging — plus, you’ll get 25W wired fast charging. At this point, I have wireless chargers dotted around my house, so it was nice to be able to take advantage of them while testing this phone.

As you would expect, the Galaxy S20 FE comes with Samsung’s One UI 2.5, which is Android 10. I’m not going to dive into the ins and outs of the Android customizations — you can read comprehensive takes in our Galaxy S20 and Galaxy Note 20 reviews — but I will say that the bloatware seems to have been pared back a little on this phone compared to some others. That’s mostly because of the fact that you can select which apps are installed on your device out of the box, and while all the extra Samsung apps and Microsoft apps are checked by default, simply taking the extra few moments to customize the pre-installs when you set your phone up is worth it.

Generally, the software was responsive and smooth. Love or hate One UI, Samsung has done a good job at making it cohesive throughout the interface, and easy to use with one hand. Samsung also wins for customizability, so if you really like to tweak and theme, you’ll enjoy the experience here.

The Samsung Galaxy S20 FE puts the flagship phone experience in a $700 phone. You’re really not missing much here. Sure, a 1440p display resolution is always nice, and some of the camera specs don’t reach the heights of the standard Galaxy S20, Note 20, or new Galaxy S21. But with a premium processor, still awesome display, premium feel, and great camera system, you can’t do much better in the price range.

I would have liked if Samsung had released this phone alongside the rest of the Galaxy S20 lineup, but it makes sense why it didn’t in order to capture those high-dollar sales first. That said, if Samsung intends to continue releasing phones of this quality in this price range, the likes of OnePlus should be very worried.

It depends on what you’re looking for. The OnePlus 8 is the main competitor here, and while it’s a great phone, it doesn’t quite have the same camera quality, it doesn’t reach the 120Hz display refresh rate, and it doesn’t have wireless charging. But OnePlus does deliver a cleaner and arguably better software experience. It could also be a toss-up between the Google Pixel 5 or OnePlus 8 as the primary competitor.

If you’re really on a budget, it’s also worth considering the Pixel 4a or waiting for the Pixel 4a 5G. They have amazing cameras and simpler software, though the specs and performance don’t match the Galaxy S20 FE, nor do the displays.

Of course, if you’re not married to Android, it’s also worth considering the iPhone 11, which comes at a similar price, has even better performance, and an awesome camera. That said, you won’t get the same display. Nor will you get 5G, and you’ll have to deal with the iPhone notch.

Last but not least, the Galaxy S21 series is now here, but while the Galaxy S21 will offer better performance, it’s also more expensive — and arguably not worth the extra cash.

With the Snapdragon 865 and IP68 water resistance, the Galaxy S20 FE should easily last through a normal two-year phone cycle, and longer if you want or need it to. The plastic back helps here too — while it doesn’t feel as premium, it does help ensure that the phone is more likely to remain crack-free throughout its lifespan.

Yes. Sure, you could spend another $300 for a marginally better phone, but if you want flagship-level quality for $700, this is currently the phone to beat.

If you’re on the hunt for lower prices for smartphones, here are the best Samsung Galaxy deals and best smartphone deals currently available.