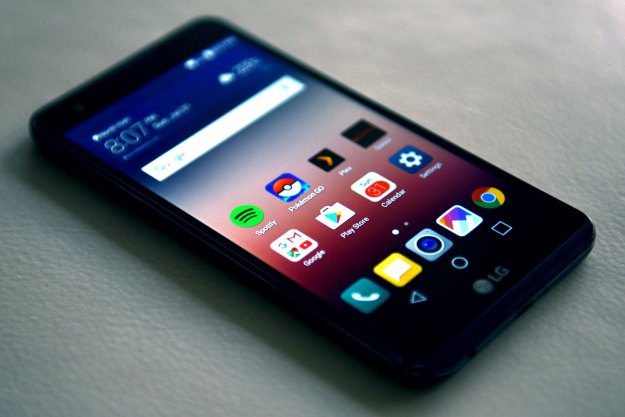 “The only thing bigger or better in this phone is the battery.”

The list of things you can do with a smartphone seems to get longer every couple of years, but one bugaboo that always seems to stand in the way is battery life. Keeping the lights on and the data flowing requires more and more under the hood, which explains why smartphone battery capacity has been creeping up faster than before.

LG leapfrogged others with the X Power, cramming a huge, 4,100mAh battery into a relatively small frame, climbing to the top of the battery-life food chain for mid-range handsets. Its name feels appropriate, but how much “power” is there in this phone otherwise?

A battery with a shadow

It’s important to put the LG X Power in context: This phone is a far cry from the company’s flagship G5, and the only thing “bigger” or “better” here is the battery. Corners had to be cut everywhere else to make the X Power really competitive on price (it’s $150 at Cricket).

That largely explains the 5.3-inch IPS display, which is only 720p HD resolution (and 277 pixels per inch), the measly 2GB of RAM, and the relatively slow 1.3GHz MediaTek M6735 64-bit processor. The low price tag also explains why there’s only 16GB of internal storage – we look for a baseline of at least 32GB these days because 16GB is too little for all your pictures, music, and videos. At least there’s a MicroSD card slot that can handle cards up to 2TB. The rear 13-megapixel camera is on par with image sensors nowadays, as is the 5-megapixel front-facing camera — though quality in both respects isn’t going to wow anyone.

The non-removable back is made of plastic, with a slight texture that makes it a little easier to grip. It’s not rubberized, though, so sweaty paws will make it feel a little slippery. It’s a fingerprint magnet in any case, and with the lens and flash flush with the rest of the back, the X Power has a very flat and smooth rear that gives it a refined look belying its humble finish. The SIM and MicroSD share the same slot on the left side, with the volume buttons above, while the right side has the power button. The bottom has the 3.5mm headphone jack and Micro USB charging port.

The battery is the standout feature by a long shot, overshadowing anything else the phone offers. LG included Quick Charging 2.0 to speed up recharges; it takes just a tick over two hours to go from empty to full with the included charger and cable.

I should also mention the weight, or lack thereof. With such a huge battery, the X Power’s 139-gram weight doesn’t feel hefty at all. It’s a lightweight for its size and the extra battery capacity.

LG opted to use its LG UX 5.0 overlay on top of Android, albeit with some caveats. Luckily, the look and feel of this version of Android 6.0 Marshmallow is almost the same as the software on the LG G5, which raised some eyebrows when it removed the app drawer (it’s since been restored). The X Power offered me the choice the first time I hit the home button after setting up the device: I could either go with or without the app drawer. Personally, I didn’t have a major preference, but at least the option is there for those who want it.

The only thing bigger or better in this phone is the battery.

Choosing one or the other does alter the home screen a little, rearranging the apps that already live on that screen. That’s because the app drawer icon on the bottom row adds room for five apps across each row on the grid. The screen without the app drawer reduces that to four, leading to larger icons. It’s entirely an aesthetic shift, but one that could make a difference if you’re a stickler for stuff like that.

What LG seems to have removed are the ancillary features and apps it offers elsewhere. Naturally, there’s no fingerprint sensor on the X Power, but apps like LG Health, QuickRemote, and Recently Uninstalled Apps are also missing. Screen-sharing and file-sharing options from the notification shade are gone as well. Since the X Power doesn’t have NFC, any features related to that, like Android Beam or mobile payments, simply can’t work here.

That leaves a more bare-bones software experience. Google’s OS isn’t stifled here, since the main features, like app permissions, Google Now on Tap, and Doze mode are available. Indeed, Doze mode can stretch out the battery even further, though that built-in feature really only works when the phone is unplugged, stationary, and with the screen off for a period of time.

Otherwise, there are no surprises here. The limits of the screen were fairly obvious once I started viewing content on it. The IPS panel does help with viewing angles, but it doesn’t stop the screen from having a washed-out look. It is an LCD, after all, so the brightness is fine, except that colors and tones aren’t pronounced — the lower resolution may be part of the reason for that.

Staying on, without pushing hard

The screen played a role in assessing overall performance, too. Whether it was viewing a video on YouTube or playing a casual game, the X Power handles the basics well enough. But when asked to lift more weight, it starts feeling the pressure. It can get a little hot under those circumstances, providing a tactile warning that the device is stretching toward its limits.

The X Power was clearly not designed to push too many pixels.

Then again, the X Power clearly wasn’t designed to push pixels. Demanding games won’t do well, and even apps that require memory, like repeated social media usage, can have an impact. Simple messaging isn’t a problem, and posting photos or images doesn’t take a lot out of the performance. But compound that over the course of a day, add in usage with other apps, and the one saving grace is that battery life doesn’t fall over a cliff.

To be fair, LG didn’t design this phone for demanding users. The combination that works here is of a phone that functions best with moderate usage, coupled with a battery that can keep it going for a full day and then some. For example, if your day consists of email, texting, some social media, a call or two, and a little web browsing, the X Power will have plenty of battery left the following morning. Intersperse that with doses of online video, Pokemon Go, and photography and the battery will take an extra hit, yet still be alive the morning after.

The processor isn’t going to eat away at the battery if it isn’t pushed hard, and data usage can be impactful, too. Pokemon Go comes to mind for the latter. But suffice it to say, the X Power is among the last to need a charge after a long stint chasing Pikachu.

Not so colorful camera

Camera performance has improved across the board with smartphones, so mid-range devices have to step it up as well. Unfortunately, the X Power is not an impressive shooter. LG understandably limited the options in the camera app, removing the manual controls seen in the flagship G line and going with a more basic offering.

While not terrible, photos in daylight or bright light appear washed out — brighter, with reduced contrast. And the white balance isn’t always on the ball, either. The resulting images appear dull and lack color. Even in optimal conditions, where it’s overcast or later in the afternoon when the sun is facing from one direction, the X Power’s rear camera just can’t bring any “pop” to the pictures it captures.

This is no doubt a consequence of the image sensor used, but I suspect that software interpolation may have something to do with it. Could an update fix the problem? I’m not sure, but LG, please try.

In addition, when the lights dim or night falls, the X Power’s camera struggles more. This wasn’t a surprise because mid-range phones rarely do well under these conditions. It was only recently that flagships started to get it right, so those components and features haven’t trickled down yet. Low-light images are noisy and overwhelmingly wash out sources of light. Shooting a street scene will invariably lead to a street lamp that looks like a flash of light. It’s not natural, and it distracts from the rest of the image. If there is an HDR (High Dynamic Range) mode in the X Power, I didn’t find it, as it wasn’t available under any settings. Having one could have helped with the highlight and contrast issues.

LG did include the same film filters it introduced in the G5, and they can add some artistic merit to images, but the best option is to try and edit a photo in a third-party photo program afterward. The filters are more for experimentation with a camera like this.

Most of the gimmicky stuff is relegated to the front-facing camera. These include making a fist to set up a selfie, a “cheese” trigger for a selfie, or a four-shot selfie interval shot.

The LG X Power has a name that may suggest powerful performance, but it’s all about the battery. This mid-ranger isn’t a device made to impress, and it’s really meant for users who don’t do that much on their phones yet often complain about battery life. If messaging and social media are your primary uses, whereas gaming and video are not, the X Power is well suited for you.

It’s up against some stiff competition, however. Motorola’s Moto G4 offers a purer version of Android and could be a better all-around performer, though it won’t beat the X Power on battery life. Other handsets in the same price range, or slightly pricier, could also give the X Power a real run for its money — though again, it will probably trump all of them on battery life.

At $150, LG’s X Power is a bit cheaper than the Moto G4 and the Moto G4 Plus, though, so it could  be a good deal for those on a tight budget. The only downside is that you have to be on Cricket Wireless in the U.S. — otherwise, you’re out of luck.