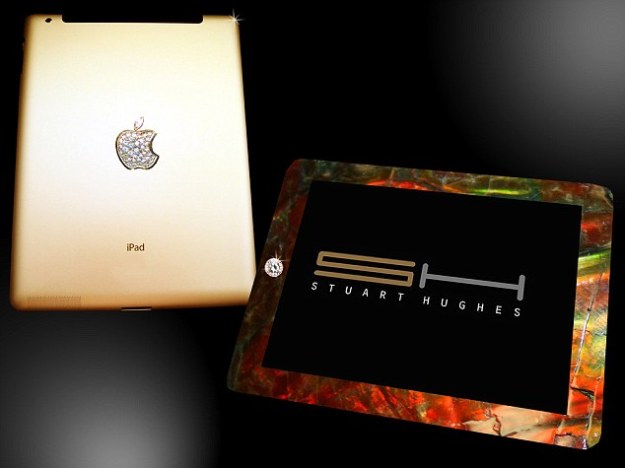 If you’re thinking of buying an iPad 2 but feel rather uninspired by the regular black and white models currently available, then how about a gold one encrusted with diamonds and the thigh bone shavings of a 65 million-year-old T-Rex dinosaur?

The iPad 2 Gold History, of which only two have been made, is the work of British luxury goods designer Stuart Hughes.

The Apple logo on the device’s solid gold back comprises 52 separate diamonds, while the front section is made from what the designer claims is 75-million-year-old ammolite rock. And if all that isn’t enough to pique the interest of a potential buyer, then this bit might: Hughes somehow managed to get hold of a T-Rex’s thigh bone, which he then proceeded to splinter and shave before incorporating into the front of the iPad.

While we’re sure most people would prefer to see dinosaur bones in a museum of natural history rather than stuck on an iPad, there may be someone out there who rather likes the idea of a bit of prehistoric femur fixed onto their tablet computer.

The front of Hughes’s device is completed with a single cut 8.5 carat diamond inlaid in its own platinum surround together with 12 outer diamonds. Weighing in at more than 2kg, it may be a touch on the heavy side for those who prefer their tablet computer around the 600g mark.

And the price of the iPad 2 Gold History? A cool $8 million. $8 million? Surely they won’t sell at that price. Best to hang in for the fire sale.