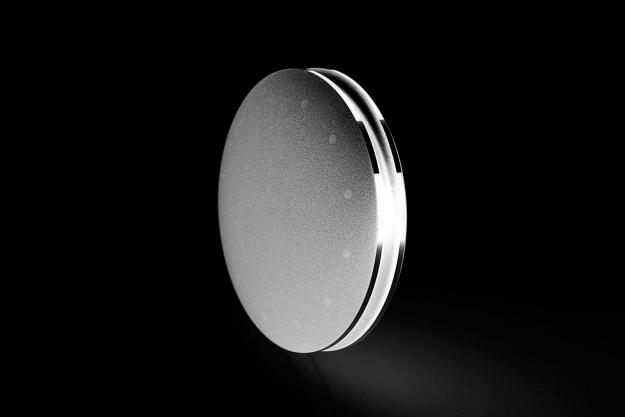 “The Misfit Shine is the first gorgeous fitness tracker. It isn't for hardcore fitness freaks, but it's a great way to get you moving.”

The Misfit Shine is a rather sexy new fitness tracker. Part of a tidal wave of wearables designed to record your activities, plot the results, and spur you on to never before reached heights of healthiness. It began life as an Indiegogo campaign, raising its $100,000 target in a single day and is now offered for $120. But does the Shine have what it takes to out … shine the competition? It might.

Shine tracks your activity, exercise sessions, and your sleep to plot a chart of your progress. You can double tap it at any time to get an indication of how close you are to achieving your daily goal, and you know you’re done for the day when all 12 LED lights burst into life. There’s also a clever secondary time function that’s surprisingly quick to get your head around, where it flashes up the hour and then the minute, like the most minimalist watch you can imagine.

To say that the Shine is a matte aluminum disk hardly does it justice. It resembles a tiny flying saucer, an impression that gains ground when you double tap the top and the 12 white LED lights that form a ring around the circumference blink into life. Turn it sideways and two shiny silver bands form a groove in the middle that lets the Shine fit snugly and securely into the provided sport band or magnetic clasp.

It really does look like a piece of jewelry.

Flip it over on to its back and you’ll see an understated Misfit logo and the number 12 which indicates the alignment for you to use the watch functionality. There’s a tiny indent above this and you can use the stylish-looking tool that comes in the box to pry it open. A circular CR20132 battery goes inside. Clip it shut and it’s completely water tight and ready to go.

It really does look like a piece of jewelry. You can wear it that way too, if you’re willing to splash out another $50 for the necklace accessory, which has a metal pendant you can attach the Shine to. Alternatively the leather wrist band, which is much like a traditional watch strap, is available in black or tan for $40.

There’s no need to buy either, because the sports band and clasp provided are comfortable to wear and versatile. You’ll probably want to wear the Shine on your wrist for swimming or running, but you’re advised to clasp it to your sock or trouser leg for cycling, and you can always wear it on a lapel.

The sports band and magnetic clasp are both silicone and the Shine fits neatly into a tight loop from which there appears to be no danger of it escaping, though it might loosen over time. At just over 9g, it’s light enough, for you to forget that you’re wearing it, and the strap is comfortable to wear for long periods.

So, we’ve established that it looks great, and it’s easy to wear, what is it actually for?

No pain, no gain

There comes a time in every person’s life when the fear starts to take hold – that time when middle age prepares to mercilessly trample the effortless, care-free nature of youth. You can’t party all night without feeling broken. Running around after children is exhausting, but somehow it never boosts your fitness levels. In order to maintain what you once took for granted, it’s now necessary to work for it.

Fitness trackers are a lot cheaper than gym memberships and personal trainers.

We all know the value of exercise. It’s not a secret. The American Heart Association recommends a minimum of 150 minutes of moderate exercise per week. Whether you’re trying to stave off a belly overhang or sculpt yourself into an Adonis, the route is the same. Fitness trackers are about making it easy to measure your progress and they offer encouragement to reach your goals. They’re also a lot cheaper than gym memberships and personal trainers.

The Shine has a small processor and a 3-axis accelerometer inside. It tracks walking, running, cycling, swimming, and sleeping, but the minimalist aesthetic extends to the data. It basically measures when and how intensely you move, employing algorithms based on it and your personal information to give you a readout of steps taken, distance covered, and calories burned. This is all counted towards a daily points goal, which you can change to suit you (the default 1,000 points seems high).

At first glance you’ll notice the calorie count is very high, but that’s because it includes a calculation of how many calories you’ll burn over time; it’s not a simple readout of the calories you burn directly through exercise.

To use the Shine you’ll need to download the free app and periodically sync the device via Bluetooth. It doesn’t offer any desktop syncing or a Web app. You must use its Android or iOS apps on a phone or tablet supporting Bluetooth 4.0 (most devices in the last year should have it). The priority is clearly iOS and the back of my unit only listed iPhone 4S or later, iPod Touch fifth-generation or later, iPad 3 or later, and the iPad Mini as supported. The focus on iOS should be obvious from the aesthetic, which closely matches iOS 7.

It’s waterproof up to a depth of 50 meters.

In fact you can also use it with any Android device that’s running Android 4.3 and up and has Bluetooth Low Energy enabled. It worked with my Galaxy S3 and my Nexus 5, though sadly you can’t sync data between devices.

The first time you fire up the app you’ll be prompted to enter your sex, height, weight, and birthday. You can sync the Shine as often as you like. As long as your device has Bluetooth and a Wi-Fi or data connection, you can tap the sync icon in the app and it will suck in data from the Shine. You can place the Shine on the circle onscreen if you like, but it really just needs to be in Bluetooth range of your phone to sync, and that’s handy because you don’t want to have to remove it from the strap every time you sync.

Syncing the Shine is quick and easy. The one time it failed during testing there was no obvious reason and trying it again a few moments later it synced just fine.

Your details are recorded day by day to build a chart of your progress showing your different activities. It would be great if it could automatically determine when you switch activity, but it doesn’t. You can make sure it records the right activity by telling the app what you’re about to do.

There’s a difference here between the more full-featured iOS app and the Android version. With iOS devices you can tag activities before you start them to ensure that it tracks what you want it to. This isn’t an option in the Android app, which makes the Shine considerably less attractive for Android owners. You have to triple tap after setting the activity to tell your Shine to start tracking; you’ll know it worked because the 12 lights blink on in an upwards flow pattern.

A triple tap on the Shine is the default trigger for recording sleep on both apps, but if you change it to another activity on the iOS app, you’ll have to remember to change it back again. On Android you’ll get an indication of how long you slept and what period was deep sleep. The iOS app lets you review this data in a chart, which shows the deep sleep periods over time. You can also see highlights in the iOS app with color-coded blocks to indicate exercise in orange, sleep in purple, and milestones reached in green.

There’s even a social side to the iOS app because you can create a personalized profile, add friends, and compare your daily activity stats.

The developers are adding new functionality all the time, so we’d expect both apps to keep improving. They recently added support for sports like tennis, basketball, and soccer, to the iOS app.

What’s great about the Shine

There are areas where the Shine is very, very good. The batteries are cheap and they last for at least four months; that’s phenomenal compared to other fitness trackers on the market and it means you don’t have to remember to charge it. Although, the fact it uses disposable batteries may prick some eco-consciences.

You’ll probably want to sync the Shine every day, but you don’t have to, if you go a week between syncs it will still record all your data and upload it to the app when you do sync.

It’s waterproof up to a depth of 50 meters and, of course, that means you never need to take it off in the shower or bath and it can handle workout sweat. It can even survive a spin in the washing machine, so if you forget it’s attached to your trouser leg, it shouldn’t be a problem.

Compared to many other fitness trackers the Misfit Shine is pretty basic.

The lack of the activity tracking feature in Android is a real deal-breaker.

In addition, tapping on the Shine is not always responsive. Sometimes you double tap lightly and it blinks your progress and the time, other times it takes a couple of attempts or a two-fingered tap to get it to work. The triple tap, for tracking activities and sleep, is slightly tougher to pull off and generally took two or three attempts to register.

It also lacks a system for tracking eating or calorie consumption, although the latest iOS app does allow you to take photos of your meals, for a visual record.

Worst of all, it can’t automatically detect when you go for a swim or a cycle or go to sleep. The lack of the activity tracking feature in Android is a real deal-breaker. It’s also not ideal that you have to set up swimming on your smartphone before you embark. It’s easy to forget to switch activities, which detracts from one its main strengths, which is that you can forget you’re wearing it. If you don’t set sleep and triple tap as you nod off then it won’t record it properly.

The Misfit Shine is the best looking fitness tracker on the market. If you want something subtle that can blend in with your look, then it’s a clear winner. We really liked the minimalist nature of it and the fact that carried through to the app and the data recorded wasn’t really a problem for us.

For casual users looking for a way to get a rough approximation of activity and sleep, the Shine does the trick. If jogging and walking are your primary activities then it is ideal. If you’re a power user and you want to track heart rate and have something that records your calorie intake and gym workouts, then this isn’t for you.

At $120 we can definitely see a market for this and the accompanying software is obviously still improving. As it stands, we’d definitely recommend it for iOS users, but we can’t do the same for Android device owners until the Android app is brought up to the same standard. The Shine definitely scores extra points for style, but there’s plenty of room for improvement in terms of functionality. If you are big into fitness, we recommend the Basis B1.