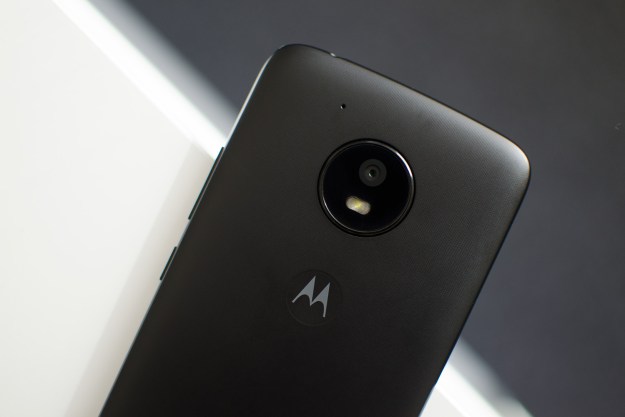 “For $130 unlocked, you won’t find a better deal on a smartphone with the latest version of Android.”

Motorola’s G series has been the benchmark for exceptional budget smartphones, and the lesser-known Moto E series strives to do the same to do the same at an even lower cost. With the latest entry — the Moto E4 — Motorola hits the ball out of the park with an impressive phone that offers plenty of value for $130. There will always be some compromises on budget devices, and the Moto E4 is no different. But price is very much the spotlight of this phone, and it’s quite competitive given the solid features you get. In our Moto E4 review, we’ll take a deeper look at what Motorola cut, what it kept, and how it all works in the end.

Budget phones like ZTE’s Max XL and ZMax Pro often go for a large screen size, but Motorola keeps things compact with the 5-inch Moto E4. It’s a little thick, but it still feels small due to its light weight, and screen size.

The rear has a plastic, removable back that mimics the design of the Moto G5. It’s fairly minimal, with just a large circular camera in the top, and the Motorola logo at the center. The right side houses the power button and volume rocker – neither feel as “clicky” as we’d like. On the top edge, you’ll find the headphone jack, and the MicroUSB charging port is on the bottom. The E4’s earpiece is also its only speaker.

There’s no fancy bezel-less design here — instead, you’ll find fairly chunky edges surrounding the Moto E4’s screen. There’s a fingerprint sensor on the bottom, and a front-facing camera on the top.

It won’t win any design awards, but the Moto E4 is sleek, compact, and easy to use one-handed.

The screen is acceptable. It has a resolution of 1,280 × 720 pixels, but at 5-inches, it still looks sharp. We didn’t run into any issues while watching YouTube videos at 720p, and while Full HD would always be preferable, we don’t think it’s necessary on a small screen. A lower resolution also helps conserve battery, and keeps the price low. If you really want a 1080p screen, take a look at the Moto G5 Plus.

We did have one qualm, though. The screen does have a pinkish hue that’s easily noticeable when reading text with a white background, or when placing the phone next to other smartphones. It’s far from a deal breaker, but it’s something you need to be aware about before purchasing the smartphone.

For a $130, we weren’t expecting much in the performance department. Thankfully, the Moto E4 surprised us with a mostly responsive and smooth interface. We did notice the occasional stutter and lag when moving through the home screen, and when opening some apps — but it was too infrequent to bother us.

The phone is powered by Qualcomm’s Snapdragon 425 (the Sprint version will have a Snapdragon 427) paired with 2GB RAM. You only get 16GB of storage, but you can upgrade it up to 128GB thanks to a MicroSD card slot. Take a look at some of the benchmark scores from the Moto E4:

As a reference, the Moto G5 Plus scored 63,190 on AnTuTu, and it costs more than double the price of the E4. You won’t be able to play intensive games or juggle multiple tasks smoothly on this phone. Games like Crossy Road, Transformers: Forged to Fight, and Drifty Chase take some time to load, but they perform well — expect some stutters. We used Android’s native split-screen view, and again, there were some stutters when scrolling, but we were still able to get the job done.

There is very little bloatware, and there’s no ugly Android skin bogging down the phone.

The Moto E4 runs Android 7.1.1 Nougat, the latest version of Google’s mobile operating system. It’s one of the best parts about the phone — the user interface is incredibly similar to stock Android. There is very little bloatware, and no ugly Android skin bogging down the phone. You can access the Google Now pane by swiping right from the home screen, or chat with the Google Assistant by pressing and holding the Home button.

There are no fancy Motorola features such as twisting the phone twice to trigger the camera, but it does have some of our simple favorites. The classic Moto Display can turn on night mode from sunset to sunrise, and discretely show notifications on your lockscreen. Moto Actions let you get rid of the on-screen Android navigation icons in favor of gestures on the home button.

As a note, the phone’s vibration motor is fairly weak; and there’s no NFC, so you will not be able to use Android Pay.

Cameras have always been a weak point in budget smartphones, and sadly the Moto E4 doesn’t break that streak. The rear camera packs 8 megapixels, while the front has 5. Photos look either underexposed or overexposed — there’s no real dynamic range. Colors are muted, and in low-light situations, photos are incredibly grainy. There’s no form of optical image stabilization, so in poor lighting conditions you have to be especially still so as to avoid a blurry shot.

That being said, Moto E4 photos are good enough to share on social media and with family, and pretty decent for a $130 phone. If you need a phone with fantastic picture quality, you’ll just have to spend a little bit more.

If you leave it in a drawer for a day, you can only expect to lose 10 percent charge.

Thankfully, the Moto E4 will last you a little more than a day. We started a day of testing off with 89 percent, then used the phone to browse the web, watch some videos, and play some games. By 7 p.m., it still had about 40 percent remaining — that’s pretty good. Standby time is also admirable. If you leave it in a drawer for a day, you can only expect to lose 10 percent charge.

It charges via a MicroUSB port, and the Verizon model will come with a 10-watt charger, allowing for better rapid charging capability.

Motorola offers a standard warranty that protects your phone from manufacturing defects 12 months from the date of purchase. Accidental drops and water damage are not covered. If you want more protection, you can always sign up for Motorola Care Accidental Protection, which covers water damage and broken screens. It’s costs for $70 for 15 months, or $100 for 24 months.

The Moto E4 will eventually be a part of Amazon’s Prime Exclusive Phones, meaning you will be able to buy it at an even cheaper price with lock-screen offers and ads. It’s unclear when it will be available, and what the price will be. The phone will also make its way to Boost Mobile, Sprint, Flash Wireless, Jet.com, Republic Wireless, Target, and Ting in July. The company said it will share more details later this summer about availability at other carriers.

For $130 unlocked, you won’t find a better deal on a smartphone with the latest version of Android.

The Moto E4 Plus will also be available in the U.S. for $180 later this summer, and you get a whopping 5,000mAh battery, 32GB of internal storage, a 13-megapixel rear camera, and a 5.5-inch screen. Those seem like worthwhile upgrades for $50 more, but it’s ultimately a decision based on how much you can spend.

Motorola said the Moto E4 has a water repellent coating — this should protect it from splashes and the rain, but it will not survive a dunk in the pool. Thankfully, the build quality is decent enough that the phone should survive a fair share of drops.

It has the May 1 Android security update, but Motorola doesn’t have the best track record anymore of pushing timely version or security updates — especially for its budget offerings. Expect a jump to Android O, but perhaps half a year after Google releases it. We expect this phone to last you two years, but perhaps not much more.

Yes. If you’re reading this Moto E4 review, you’re likely looking to purchase a smartphone for very little money. Whether it’s to have a cheap burner smartphone lying around the house, a phone you want to give to your children, or even if you’re looking for a new smartphone — the Moto E4 is a steal at $130, and it’s the right one to buy.