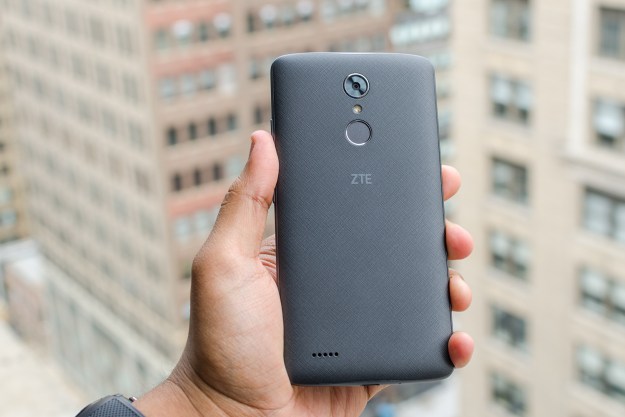 “The ZTE Max XL is affordable, but its predecessor has us spoiled.”

Chinese smartphone manufacturer ZTE took us by surprise last year with the Max Pro, namely because of its $100 price tag (on MetroPCS). Its big, bright, beautiful screen, solid performance, and long-lasting battery made its disappointing camera easy to forgive.

Now, ZTE’s back with another budget-focused phone: The Max XL. It’s the spiritual successor to the ZMax Pro, but outfitted with a bigger battery and other minor updates. Best of all, it costs the same $100 with a $30 discount, though this time that price is available only on Boost Mobile.

You can’t expect much for a $100, and while the ZMax Pro surprised us, the Max XL is a little underwhelming. A long-lasting battery is the best thing going for it, and you’ll have to live with a sluggish processor, and another disappointing camera.

You’d be forgiven for mistaking the Max XL for the ZMax Pro. From the front, the two phones look identical.

Despite the Max XL’s massive 6-inch footprint, I didn’t find it any more awkward to handle than last year’s ZMax Pro. Admittedly, one-handed use is pretty much impossible — you’re forced to shimmy up the Max XL’s edges to reach the top. But considering the generous amount of real estate afforded, it’s a price to pay for fans of large-screen phones.

The Max XL’s giant screen is shielded by curved Gorilla Glass. The edges are ever-so-slightly raised above the Max XL display, and contoured around the phone’s four edges. We’re big fans of the execution, here — the sloping glass feels and looks just as good, if not better, as it does on the ZMax Pro.

While the XL is lighter than the Pro, it feels bulkier and is thicker. It’s likely due to the bigger battery in the XL, and we don’t mind — after all, who doesn’t want more battery life?

The other differences between the two phones are a little tougher to spot. The Max XL inherits the ZMax Pro’s sturdy textured power button and two-button volume rocker. The SIM card tray and MicroSD card slot haven’t moved from their respective positions on the phone’s upper-left side. The XL retains a 3.5mm audio jack and a USB Type-C port, which is more than can be said for some budget phones.

On the back, the Max XL’s rear camera — a perfect circle — sits above a single LED flash. The embedded fingerprint, positioned below the flash, has a sloping edge that’s not as harsh on skin as the the ZMax Pro sensor’s sharp edges.

Another miss is the Max XL’s lack of a NFC chip.

There’s one similarity between the Max XL and ZMax Pro we were disappointed to see: Its three-button row of touch-sensitive navigation buttons. They don’t have any distinguishable icons to remind you which is the back button, and which is the Recent apps button — and worst of all they’re sometimes unresponsive.

Another miss is the Max XL’s lack of a near-field communications (NFC) sensor. Just like the ZMax Pro, it doesn’t support Android Pay — you can’t tap to pay at grocery stores, coffee shops, and other retailers with contactless terminals; pair with other NFC devices; or transfer files via Android Beam. Tap-to-pay platforms like Android Pay are gaining steam, so it’s sad to see ZTE leaving NFC out. But the company isn’t alone — Lenovo’s Moto G5 lacks NFC in some territories as well.

The Max XL is a tad bit more comfortable to hold, thanks to rounded-out sides and corners. It ditches the ZMax Pro’s gold accents, instead opting for a solid light-grey scheme. The new back cover material resists oily fingerprints, and has a much better grip.

We weren’t expecting much from the Max XL’s Full HD (1,920 × 1,080 pixels) screen, and that intuition turned out to be on point. In our testing, text was sharp and the panel’s scale lent a cinematic quality to movies and TV shows. Initially, we noticed a pinkish distortion that seemed to worsen in apps with white menus like Chrome and YouTube, but after testing a second device we could not reproduce the issue.

Brightness is more or less the same at the maximum setting, when compared to the ZMax Pro’s screen, and so is the external speaker. We found the ZMax Pro’s loudspeaker to be tinny and indistinct, and the Max XL’s model is no different. The included Dolby Audio equalizer app, which lets you tweak frequency levels and switch between pre-programmed audio profiles, didn’t seem to improve anything.

Performance will get you by

The Max XL shares even more with the ZMax Pro internally than it does externally. It packs the octa-core Qualcomm Snapdragon 435 processor. We would have liked to see a new chipset here, but the 435 isn’t bad at all.

In our testing, the Max XL handled light tasks flawlessly. Albums in Facebook and Chrome loaded relatively quickly, as did chat threads in Slack and Facebook Messenger. Pinch-to-zoom in Google Maps was as speedy on the Max XL as it is was the ZMax Pro. We didn’t notice any slowdowns while opening large attachments in Gmail, which sometimes bogs down even the best performers.

That said, the Snapdragon 435 is no powerhouse. In Chrome, high-res images strained the chip — panning and zooming became noticeably jittery. Apps sometimes hesitated a second or two before launching, and there seemed to be a slight, pervading lag on the home screen and in the multitasking menu.

But it didn’t show in benchmarking tests. In 3D Mark’s Sling Shot ES 3.1 test, the Max XL managed a score of 455 — a little better than the ZMax Pro (368) and about even with the Snapdragon 617-powered Moto G4 (384), but short of aging competition like the two-year-old Nexus 5X (1,487), which was slightly more expensive and has a different processor.

We were impressed by the ZMax Pro’s long-lasting battery, and the Max XL is an even better performer. That’s not exactly surprising — its 3,990mAh battery is almost 600mAh bigger than the the ZMax Pro’s (3,400mAh).

Over the course of three fairly long workdays, the Max XL lasted like a champ.

Over the course of three fairly long workdays, the Max XL lasted like a champ. Facebook updates, email attachments, RSS feeds, and light internet browsing drained it to about 40 percent. By the time I slapped it on the charger around midnight, it had about 25 percent. Altogether, that worked out to about 18 hours of battery life.

The Max XL, just like the ZMax Pro, supports Qualcomm’s Quick Charge 3.0 rapid charging technology. It doesn’t charge as quickly as the chip maker’s new Quick Charge 4.0-enabled chips, which deliver up to five hours of battery life in five minutes. But it’s no slouch. In our testing, the Max XL took between forty minutes to an hour and a half to recharge fully.

The ZMax Pro’s 13-megapixel rear camera struggled with detail, color inaccuracy, and noise. Unfortunately, the Max XL — which packs the same sensor — doesn’t improve on much.

In decent sunny, outdoor lighting, the Max XL captured competent — but not great — shots. It rendered buildings in New York City’s Flatiron district a little dimmer than it should’ve, and shadows lacked detail.

Indoor shots were a different story. Under the bright florescents of Digital Trends’ NYC office, contrast was substantially degraded. The Max XL had a tough time accounting for artificial light sources, resulting in low-contrast, out-of-focus photos with lots of noise.

The front-facing 5-megapixel camera was no better. In our testing, selfies came out blurry and noisy.

One of the best things about the ZMax Pro was its “light touch” take on Android.

One of the best things about the ZMax Pro was its “light touch” take on Android. If we didn’t know any better, we’d think it was running bone-stock Android Nougat 7.1.1 — the icons, lock screen, and menus are as close as you’ll find to the vanilla version of Android. It isn’t completely untarnished — the notification shade is transparent, for example — but ZTE left the core elements intact.

ZTE has kept bloatware to a minimum, too, just as it did with the ZMax Pro. Lookout, a mobile security app, is in tow, as is a sound recorder app, an FM radio app, and a basic file manager. That’s about it.

ZTE provides a standard one-year limited warranty on the Max XL. It offers replacements and repairs on units that are found to be “defective in material or workmanship,” and offers a refund if a repair is determined to be impossible. It doesn’t cover unauthorized modifications made to the Max XL, of course, and accidental damage will also void the warranty. In other words, if the Max XL’s screen shatters or its casing scratched, those repairs will have to be paid for out of pocket.

The ZTE Max XL is exclusive to Boost Mobile, Sprint’s prepaid brand, for the time being. It’s available for $100 after a $30 promotional discount.

ZTE’s ZMax Pro may not have been perfect, but it was a pretty compelling deal at $100. The Max XL will give you a similar experience, but there’s even more competition.

ZTE’s generally good about keeping its phones up to date, though you may have to wait a few months. It recently rolled out Android 7.0 Nougat, the newest version, to the ZTE Axon 7. It announced that older phones, including the Axon Max, and Axon Elite will receive the upgrade to Nougat in the near future.

Historically, ZTE’s baked major new features into software updates. The Axon 7, for example, got support for Wi-Fi calling and Google’s Daydream virtual reality platform. If you pull the trigger on the Max XL, you can expect it to last at least a year.

Yes. If you can spring for a higher tier of budget phone, we highly recommend the Lenovo Moto G5, which has a far better camera, processor, and screen than the Max XL. It starts at $230, but in our estimation, it’s extra money well spent.

If not, the Moto E4 is also an excellent choice that will only cost you $130.

No. The Max XL is a solid budget phone for $100, but you can get a slightly better experience by going with the similarly-priced Moto E4. If you can spend a little more money, go for the Moto G5 Plus, and you’ll have a far better experience. If you’re on Boost Mobile, the ZTE Max XL is still a fine choice — especially thanks to its long-lasting battery.

Video-editing app LumaFusion to get a Galaxy Tab S8 launch
Apple AirPods Pro 2 vs. AirPods Pro: What’s new?
The first Galaxy S23 Ultra leak is great news for S22 Ultra fans
Pixel 7: Everything we know about Google’s 2022 flagship
Latest Google Pixel 7 leak reveals the full design in all of its glory
Which $1,000 phone has the better camera — iPhone 14 Pro or Galaxy Z Flip 4?
How to change the time font on your iOS 16 lock screen
How to use iOS 16 photo cutout to cut and paste images
The best selfie apps for iOS and Android
Experts say the iPhone 14’s satellite feature may have a dangerous side effect
How the Galaxy Z Flip 4 fixed my unhealthy phone habits
iOS 16’s biggest Apple Pay feature might be delayed until 2023
Best iPhone deals and sales for September 2022