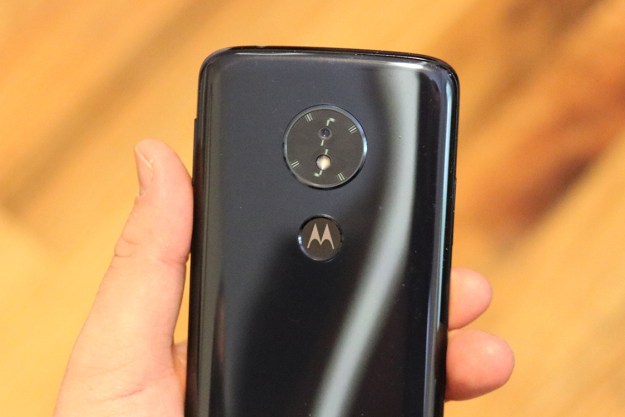 “The Moto G6 Play looks far better than its low price tag, and it can last nearly two days.”

For years, the Moto G-series has been our go-to pick for budget phones. They deliver solid performance and a close to stock version of Android for under $300.The budget market has become fiercely competitive, though, and phones like the Honor 7X and Nokia 6.1 have upped the ante with beautiful designs and capable cameras.

With this year’s crop of Moto G6 series phones — the Moto G6, Moto G6 Play, and the Moto G6 Plus — Motorola has focused on making its budget phones look like pricier, flagship phones. We’ve already looked at the G6 and the G6 Plus, so it’s time to look at the most affordable in the series, the G6 Play. It features a similar design as its more expensive siblings, but some components and features have been pared down to keep the price point low.

The Moto G6 Play takes design cues from its more expensive cohorts, but there are a few subtle cost-saving differences. Some of these tweaks can even save you money in the future.

For example, on the back of the G6 Play is a gorgeous, glossy body that looks strikingly similar to the other G6 series phones with one exception: It’s not glass. The back of the G6 Play is plastic, a choice we prefer as there’s a much smaller chance for cracks over the Gorilla Glass 3 on G6 and G6 Plus. Repairs for the glass backs on the latter two could end up costing as much as the phones, something you don’t need to worry about on the G6 Play.

The back of the G6 Play is plastic, a choice we prefer as there’s a much smaller chance for cracks.

There’s the same round camera module on the back of the G6 Play as the other two G6 phones, but it only packs a single-lens camera. Best of all, it’s nearly flush with the body, so it’s easier to use the phone when it’s laying flat on a desk. The fingerprint sensor is also on the rear in an easy-to-access position.

Flip the Moto G6 Play around and you’ll find a 5.7-inch display, with bezels on the top and bottom. The top is home to an 8-megapixel selfie camera and flash, while the bottom features the Motorola logo. We’re not sure why Motorola needs to add its brand name to the front of the phone, as it looks a bit tacky. The Motorola logo on the back is more than enough.

The IPS LCD screen has a resolution of 1,440 x 720 pixels with an 18:9 aspect ratio. It’s satisfactory, though text and images aren’t as sharp as you’ll find on the other G6-series phones or even the similarly priced Honor 7X. Colors, on the other hand, were vivid and the phone got bright enough to see outdoors.

The edges surrounding the screen have slimmed down (especially on the top), though they are chunky when compared to other smartphones. We don’t mind, and the phone looks quite modern considering its price.

The volume rocker and power button sit on the right edge, and up top is a 3.5mm headphone jack.  A MicroUSB charging port is on the bottom, which is a little disappointing. Motorola added the USB Type-C charging port to the Moto G6 and G6 Plus — it’s the same port you’ll find on almost all other Android phones — but the company said it will likely bring USB Type-C to all its budget options starting next year. It would have been nice to see it on the G6 Play, but it’s not a dealbreaker. The similarly-priced Honor 7X uses MicroUSB as well, so it certainly must help keep the cost down. Sadly there’s only one speaker output — the top earpiece.

Our review model is the Deep Indigo version of the Moto G6 Play, and it’s the only color available in the U.S. While we love the high gloss design, it definitely picks up plenty of smudges and scratches. There’s thankfully a transparent case included in the box that offers some protection.

Like the other G6 series phones, the Moto G6 Play doesn’t have an IP rating for water resistance, but it also lacks the water resistant coating that comes standard on the G6 and G6 Plus. You definitely don’t want to get it wet.

The Moto G6 Play is powered by Qualcomm’s Snapdragon 430 processor, 3GB of RAM, and it comes with 32GB of storage. There’s a MicroSD card slot in case you want to add more storage. Motorola does also offer a model with 2GB of RAM and 16GB of storage at a lower price, but we did not review this version.

In our day-to-day use of the phone, performance was acceptable, though a bit sluggish. There’s a noticeable delay when opening new applications or when multitasking with split screen view. It’s still capable of handling most tasks like browsing social media, the web, and messaging, but performance will just get worse over time, so it’s a little worrying.

We did try running a few graphics-intensive games on the G6 Play, and we were pleasantly surprised.

We did try running a few graphics-intensive games on the G6 Play, and we were pleasantly surprised. Super Mario Run took a moment to load, but we had no problems playing the game without lag. We also gave PUBG: Mobile a run on its lowest settings, and we still had no issues other than long load times.

Here are a few benchmark results:

When compared to the Nokia 6.1 and Honor 7X, there’s really no contest. The Honor 7X scored an AnTuTu score of 63,311, and the Nokia 6.1 scored 88,595. Both phones outperform the Moto G6 Play by a long shot. It’s worth remembering though that benchmarks are good for a baseline comparison but may not reflect a phone’s ability overall.

The Moto G6 Play ships with Android 8.0 Oreo, and the phone should get at least one Android version upgrade — so it should receive Android P. Motorola takes its time with updates, though, so we wouldn’t be surprised to see the update arrive more than six months after it’s released by Google.

The Moto G6 Play has a near stock version of Oreo, which means there’s almost no bloatware. The only additional software features you’ll find are Motorola services. Moto Display, for example, lets you enable a custom, always-on display. Moto Actions let you use gestures to trigger actions, like flipping the phone upside down will trigger Do Not Disturb mode, and a double twist will open the camera. There’s no Moto Voice, which lets you use your voice to launch apps or check the weather (it’s available on the G6 and G6 Plus).

Moto Key is one of the only other software additions from Motorola, but it feels like a redundant feature since Google’s Autofill software works better and is built into Android. Moto Key lets you access certain websites, apps, and devices via your fingerprint sensor. We’re already logged into most of our services though, so we never found a real reason to use it. You can also use it to log into your Windows computer, though it requires additional software to work.

Motorola introduced dual cameras on the Moto G6 and G6 Plus this year, but the Play didn’t get the same love. There’s only a single 13-megapixel lens with an f/2.0 aperture.

In good lighting, the camera performs well. Colors are vivid and relatively accurate, and detail is solid.

Like most budget phones, however, things go south in less than good lighting conditions. Color in our low-light photos appear muted, and there’s a ton of detail lost in significant noise. Unsurprising and unfortunate, but it’s a problem virtually all budget phones have.

The front-facing 8-megapixel shooter is a tad underwhelming.

The front-facing 8-megapixel shooter is a tad underwhelming as well. We took several test selfies in different lighting conditions and they all turned out to generally be fuzzy, without a lot of sharpness. Turn on the optional beauty filter, and you’ll look like an anime character with big eyes.

Battery life worth bragging about

The Moto G6 Play is packed with a gigantic 4,000mAh battery, which Motorola claims should last for 36 hours with regular use. We found that claim accurate in our tests.

On an average day filled with web surfing, messaging, watching YouTube videos, and podcast streaming, the Moto G6 Play’s battery only depleted around 35 percent by 7 p.m. That means we were left with around 65 percent for the remainder of the evening, which can easily take you well into the second day.

The MicroUSB charging port doesn’t offer the same TurboCharge feature that you’ll find on the G6 and G6 Plus, but Motorola said the G6 Play has its own fast charging feature that will add hours of use to your battery over a period of minutes. When we charged our nearly dead G6 Play with the included adapter, it gained about 12 percent battery life over 25 minutes, which isn’t very impressive.

The Moto G6 Play costs $200 and is available from Verizon Wireless, Boost Mobile, Cricket Wireless Virgin Mobile, Republic Wireless, and Ting Wireless. AT&T will offer the phone on its postpaid plans. You can purchase an unlocked variant through third-party retailers including Amazon and Best Buy. Some carriers may only be carrying the 2GB RAM and 16GB model of the Moto G6 Play, which only costs $130.

Motorola offers a standard one-year warranty on the G6 Play that offers protection from manufacturer defects.

The Moto G6 Play doesn’t look like a budget phone and can last two days, but everything else about it is average.

Yes. The Honor 7X costs $200, and it has a speedier processor with more RAM, a higher resolution screen, good dual cameras, but the battery will only last you a day.

If you can stretch your budget a little more, you can pick up the Moto G6 for $250 or the excellent Nokia 6.1 for $270. Both phones offer a gorgeous design and much improved specs over the Moto G6 Play, but the Moto G6 Play still beats them all with battery life.

We believe the Moto G6 Play should last a year or two. Its processor is a little dated and it’s already a little sluggish, which is why it will likely run even slower the longer you use it. There’s no glass back, so you only need to worry about shattering the front screen. There’s also no IP-rated water resistance, so you want to keep this phone away from water.

Yes, but mostly if two-day battery life is important to you. If you can get by with a day of battery, we strongly think you should look at the Honor 7X or the Nokia 6.1.