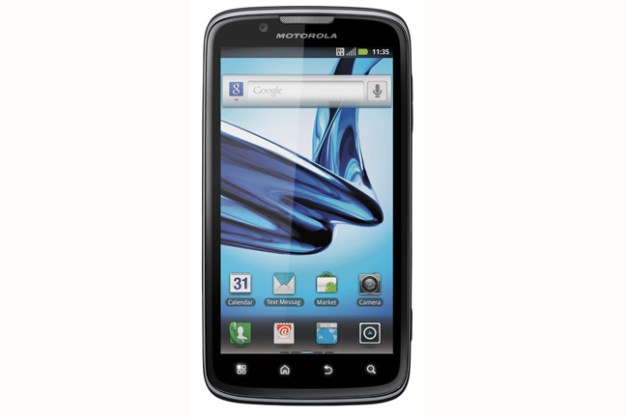 “The Motorola Atrix 2 is a great phone at a price considerably less than its competitors. At $100 with a two-year contract, the Atrix 2 a great buy for anyone on AT&T's network.”

The Motorola Atrix was one of the first dual-core phones of 2011 and remains a solid choice if you’re looking for an Android smartphone on AT&T, but we found out that it had a few downsides too. Most notably, the screen had some issues and the MotoBlur interface was almost universally panned. Not to give up on a decent phone, Motorola went back to the Atrix, tweaked it, and released the Atrix 2 in October. The result is a better phone in a number of ways.

Though Motorola has been leaning towards more rigid designs in its Verizon phones like the Droid 3, Droid X2, Droid Bionic, and Droid Razr, the Atrix 2 retains the curved edges of the original Atrix 4G and is a lot nicer to hold than all of Motorola’s phones this year outside of the Photon 4G for Sprint, which is a personal favorite of ours. The Atrix 2 has a nice bezel to its Gorilla Glass screen, much like the Photon as well, and carries the same shiny volcanic glass, darkened silver front and textured rubber covering on the back.

As far as heft is concerned, the Atrix 2 ups the screen size from 4 inches to 4.3 inches, and is a tad thinner at 10mm thick, compared to the Atrix’s 11mm. This may not seem like much, but the Atrix 2 also doesn’t have a bubble on its back like a lot of really thin phones, meaning it’s a clean 10mm thick from top-to-bottom.

Unlike the new Droid Razr, the Atrix 2 will fit into all of Motorola’s docks and peripherals because the Micro HDMI and Micro USB ports are all on the lower left hand side. Chances are that you don’t own any Motorola docks though, so just know that you can find them easier on eBay or Craigslist if you’d like. The Navigation dock works fairly well as a GPS companion while driving too.

Like we said, it’s one of the more comfortable phones to hold. Due to the large 4.3-inch screen, this may be a bit large for those with smaller hands, but it’s easy to get a good grip on the phone and the power button on the top right is well placed and large enough to press. The volume toggle is just the opposite. It’s too short and its sides are difficult to press. An audio jack adorns the top center of the device.

The Atrix 2 is a bit behind the curve, but not by much. The highest-end phones are mostly 1.5 GHz dual-cores, but the Atrix 2 retains the same 1GHz dual-core processor speed of its predecessor, though with a better TI OMAP 4430 processor. The rest of the specs are pretty familiar. It has 1GB of RAM, 8GB of internal storage, and comes with a 2GB microSD card. All your default functionality, like Bluetooth support (only 2.1), DLNA, Haptic feedback, accelerometer, and digital compass, are present.

We ran a Quadrant benchmarking test and achieved scores between 2200 and 2300, meaning it’s on par with most dual-core devices on the market, and out powers a few as well. The HTC Amaze, despite having a 1.5GHz processor, performed in line with the 1GHz Atrix 2. For reference, an original two-year-old Droid would score about a 350 on this test, meaning these phones are much more powerful than what we were seeing just two years ago.

The original Atrix had an impressive 540×960 pixel 4.0-inch screen, but like other Motorola phones this year, had trouble displaying bright colors due to its PenTile LCD screen. Visible black subpixels dotted the screen, creating a blander experience than MotoBlur would on a good day. This has been fixed with the Atrix 2 which has a screen that’s plenty bright and takes full advantage of its 540×960 pixel resolution.

Oh, Motorola. We can’t wait until you’re completely run by Google, if only because it might mean the end of MotoBlur and NinjaBlur and all these silly modifications. The Atrix 2 runs Android 2.3 (Gingerbread), but layered on top of Google’s OS is Motorola’s NinjaBlur interface, which is mostly harmless, but makes the OS somewhat dreary and lifeless. Chances are, if you’re using a phone, you won’t really care about this too much as all the functionality of any other Android smartphone is present, but there’s something to be said for good design and Motorola just doesn’t have it.

The highlight of NinjaBlur is the widget selection. The social networking widget, music widget, and calendar widget are quite nice and fully resizable so they can fill your screen or take up just a few blocks. Customization is also good right? When you move icons around the screen, objects in your way will move around or trade places with your selection; it works well. The typical AT&T bloatware is here including AT&T Navigator, Let’s Golf 2, and Qik Lite. Fortunately you can uninstall them if you don’t want them, which is fantastic considering no such option exists on many other phones, especially on Verizon.

Motorola has said that most of its high-end phones will get an Android 4.0 (Ice Cream Sandwich) update by early 2012, but we don’t have any specifics yet. The Atrix 2 should certainly qualify for such an update and we hope it does.

The Atrix 2 has a dedicated camera button, which is nice, but suffers from a slow autofocus, slow shutter speed, and bland picture quality. The rear camera specs out at 5MP and the front at 0.3MP (VGA) which is a bit behind the 8MP and 1.3MP standard that most phones have these days. Still, megapixels don’t always matter as the picture quality usually speaks for itself. The Atrix 2’s camera tells me that Motorola still hasn’t made picture quality a priority. If quality pictures are one of your priorities when purchasing a smartphone, we recommend you pick up an iPhone 4S or a high-end HTC phone. The Galaxy S II Samsung phones also provide a decent photo experience.

The Atrix 2 is capable of taking pictures but they just aren’t fantastic pictures, and the slow shutter/autofocus response will lead to a lot of lost moments. The video recording is 1080p, but its quality is also hampered by the camera.

Call quality is good on the Atrix 2. We made a few calls from the Manhattan, New York area and had no trouble understanding the other caller or being understood. One caller reported that we sounded clearer than usual, though speakerphone quality is pretty standard and nothing to write home about.

AT&T’s “4G” HSPA+ network had scattershot performance in the New York area. Sometimes we’d achieve speeds of up to 5 Megabits per second (Mbps) and a few seconds later be down to 500Kbps (0.5 Mbps). Upload speeds maxed out at 1.5Mbps, but came in much lower at times. AT&T’s network may be experiencing some oddities since it turned on its 4G LTE network, which is only usable on a couple devices so far (this isn’t one of them). The whole experience is a far cry from Verizon’s average of 8-10Mbps downloads (speeds comparable to home Wi-Fi) and 4-5Mbps uploads (speeds much faster than most home Wi-Fi).

We suggest you test out AT&T’s network in your area by running a few speed tests on a friend’s phone or one at a retailer. Speedtest.net is a good app to have for this.

Motorola claims 8.5 hours of talk time and 16 days of standby time for the Atrix 2 which has a 1785mAh battery, if that means anything to you. We’ve seen fairly standard battery life from the phone overall. It should last you a day on a charge, but like all smartphones, it will need to be charged every night if you don’t want it to go dead on day two. Battery life is better than Verizon’s 4G LTE phones, with the exception of maybe the Droid Razr.

The Motorola Atrix 2 is a great phone at a price considerably less than its competitors. At $100 with a two-year contract, the Atrix 2 a great buy for anyone on AT&T’s network. Motorola’s NinjaBlur interface isn’t fantastic, but the screen is a step up from previous phones and for 4.3 inches, it feels relatively comfortable in your hand. If you don’t have $100, then see if you can’t get the original Atrix 4G as it should be free by now.