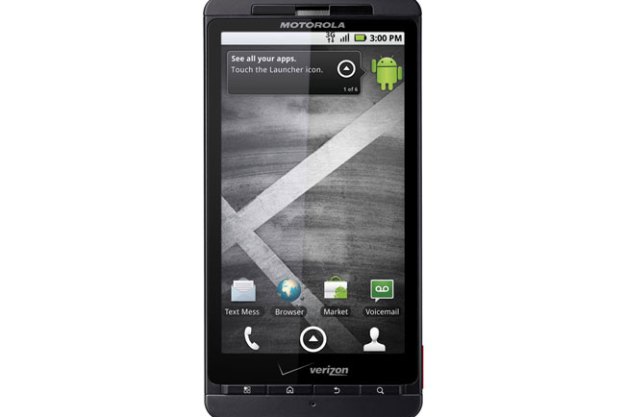 “Motorola’s Droid X joins the iPhone 4 and HTC EVO 4G in the top tier of superphones, boldly claiming its spot as the best Android smartphone on Verizon.”

Three months ago, Motorola’s Droid X would have been a landmark phone. But this is July 2010, not March, and the Droid X (while a wildly impressive package of bleeding-edge capabilities) is just the latest in a continuing series of similarly-equipped superphones, following the Sprint HTC EVO 4G, the Apple iPhone 4 and the Galaxy S series of phones unveiled earlier this week. We don’t mean to cynically demean the Droid X – it will easily be the best Android phone from Verizon when it goes on sale July 15, at least until the Galaxy S Fascinate becomes available sometime in late summer or early fall.

Minus a front-facing camera and 4G connectivity, Droid X has more in common with the Sprint HTC EVO than with previous Droids. Both are Android 2.1 phones (both upgradable to Android 2.2 when available), equipped with a 4.3-inch touchscreen, 1GHz processor, 8-megapixel camera, high-definition video recorder, HDMI jack, Wi-Fi, 8GB of built-in memory plus a high-capacity microSD card slot for a potential 40 GB of storage and a built-in mobile hotspot.

Spec-wise, there are minor differences between the Droid X and the EVO, again, other than 4G and the front-facing camera. The Droid X’s LCD has slightly more pixels, 854 x 480 versus EVO’s 800 x 480. The EVO’s 4G mobile hot spot can handle up to eight simultaneous users, Droid X’s 3G up to five. The EVO is a hair taller at 4.8 inches vs. Droid X’s 4 inches and a bit thicker (both are 2.6 inches wide) – although both are technically around a half inch thick (Droid .4, EVO .5 inches) – the Droid X measures that thick only at the top part of the phone housing the camera and is otherwise just around three-eighths of an inch thin. The Droid X has a slightly more powerful 1540 mAh battery compared to the EVO’s 1500 mAh cell. And finally, the EVO is around a half ounce heavier (6 compared to 5.47 ounces). But this is splitting superphone hairs – both are impressive technical achievements, and none of these spec differences favor one over the other.

Even though Samsung has yet to release specs for the Galaxy S Fascinate, previews indicate it is similarly featured to both, except for a slightly smaller 4-inch screen. That extra .3 of an inch is hardly a deal breaker and is more than made up for by Fascinate’s brighter and thinner Super AMOLED display. This could be the deciding factor between the Fascinate and the Droid, as we shall see.

Physically, the Droid X is a now-familiar slab, its face nearly all screen with the usual four Android hard keys arrayed along the bottom – Menu, Home, Back and Search. Android 2.1 gives you seven home screens, each configurable with varying and sundry active social networking and multimedia apps.

Up on the top perimeter are the 3.5mm headphone jack and an oddly-centered power key (maybe we’re just used to the iPhone’s right-located power button). On the bottom left perimeter are the easily confusable microUSB and mini HDMI jacks (thankfully, Motorola clearly labeled each); on the right perimeter are the red camera shutter key and the toggle that handles both volume and camera zoom. The Droid X’s best physical feature: an easy slide-off rear battery cover. It’s worst? You have to remove the battery to swap the microSD card out, but Verizon has preloaded a 16GB card, so this likely won’t be a problem for most users.

As noted, on the rear is a bulging half-inch thick camera array, with a dual-LED flash.

Verizon has partnered with Blockbuster to supply video content, but in the past we have found the registration process unnecessarily awkward. The version on our test phone required an update, but when we clicked to update, we got a “There are no matches in Android Market…” message. The disconnect is likely a result of the pre-production software the test phone was loaded with. You’ll be better off sideloading content.

Since the Droid X is a 3G phone, YouTube videos default to low quality versions, forcing you to click through to get the high-quality editions.

At the Samsung Galaxy S announcement event, we got to compare Droid X’s screen with the iPhone 4’s, EVO’s and the Fascination’s. In the dark room, the iPhone’s highly touted 960 x 640 Retina display definitely had the cleaner, crisper look, especially for text. The Fascination the brightest and most vibrant images, with deep, plasma-like contrast. However, unless you did the same squinting side-by-side comparison, you’d be hard pressed to see any significant difference between them, until…

…you get outside. The Droid X’s screen metaphorically melts in the sun, images nearly bleach out, rendering especially the camera viewscreen almost useless. We didn’t get the Samsung Fascination out in the daylight, but it was easy to see how its native AMOLED brightness could stand up better to sunshine than the Droid X; the iPhone 4’s screen maintained higher visibility than the Droid X.

Motorola phones have a well-deserved reputation for full-throated, landline-like sound quality at both ends of calls, and the Droid X upholds that superior sonic tradition. However, we had to boost volume to the maximum to overcome ambient Manhattan traffic, and it still wasn’t quite enough.

The bulging camera at the top of the Droid X poses a pocket problem. The Droid X is top heavy, so if placed top-up in a breast pocket, as you’d instinctively do, it topples over in a wide pocket or just awkwardly leans forward. Plus, when you lift the phone out of the pocket, you’re likely to grab – and thereby smudge – the camera lens. Obviously, the solution is the slip the phone in a breast pocket top down, which, for the OCD among us, induces psychosomatic twitching.

Also, the physical control buttons below the screen are uncomfortably small.

For actual voice calling, you get a phone icon at the bottom of all the home screens, plus the option to create calling favorites, with photos from Facebook as icons, on the first right-swipe home screen. Contact entries give you all the calling, emailing and social media dope (assuming you tell the phone which social media outlets you belong to), complete with latest Facebook updates.

Likely because our test phone was loaded with pre-production software, we couldn’t get the built-in mobile hotspot to work.

Mobile-oriented sites and sub pages all loaded in three seconds or less; full HTML pages such as The New York Times between 5 and 10 seconds, depending on graphical content. We only encountered one connection problem wandering around midtown Manhattan, always the trial by ordeal for cell phones.

Outdoor photos taken with the Droid X look among the best we’ve seen from a cell phone, crisp and colorful, sans the usual edge fuzziness caused by digital interpolation often seen in even multi-megapixel imagers. Indoor shots, however, were often cloudy, and lack focus.

However, the Droid X’s still camera seemingly has a tighter lens than the other superphones. The EVO’s camera gave us a little more image, the iPhone 4 about a third more. We were unable to find out the exact lens focal range for each, but if I had to guess it looked as if the Droid X has the equivalent of around a 50mm lens, the iPhone 4 something like a wider 35mm.

While still images are impressive, HD video was disappointing. It looked choppy, with lower levels of detail compared to the EVO and especially the iPhone 4. The Droid X video clocked in around 24 frames per second, encoded at around 5 to 7 kbps second. The EVO video also was captured at around 5-7 kbps and 24 fps, but footage seemed smoother, and the iPhone 4 video out-smoothed them both, with nearly a full 30 fps at 10-plus kbps.

The Droid X has a 1540 mAh battery, with a whopping eight-hour rated talk time and nearly 10 days of standby. Sprint didn’t release battery life ratings for the EVO, but in everyday use, it seemed the Droid X lasted farther into the day with more juice than either the EVO or the iPhone 4.

With its superphone specifications, the Droid X represents the new bleeding-edge normal, and is the best Verizon Android phone yet. But this superlative may be short-lived. Its individual capabilities hover close to the iPhone 4 and EVO, and may be surpassed by the Galaxy S Fascination thanks to its superior AMOLED screen. You may want to wait and compare the two before making a two-year contractual commitment.