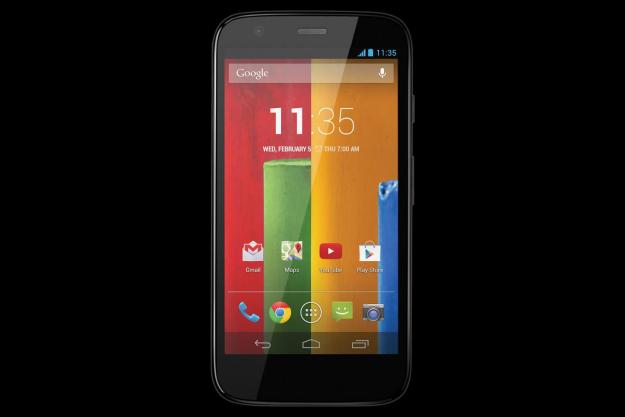 “The Moto G is the bargain of the year. It refuses to look, act or feel like a cheap phone, and out-performs more expensive phones. The only letdown is its small amount of internal memory, and basic camera.”

While adding the word cheap next to any piece of consumer electronics rarely increases its desirability, supplementing it with bargain can do the opposite. A prime example would be the Nexus 4, which although still relatively expensive, was superb value for money and it became a highly sought after phone. This has been repeated by its successor, the Nexus 5.

But what happens when a phone is both cheap and a bargain? Is that even possible, or would such a device cause the seas to boil and the sky to fall in? Upon its announcement, the Motorola Moto G was hailed as a potentially market-altering smartphone, thanks to its low price and generous on-paper specification. But could a phone priced at $180 really rise above mediocrity, become desirable, and live up to Motorola’s hype?

Don’t let the price fool you, this is a well-built phone

One of Motorola’s biggest hurdles with the Moto G is how to ensure it doesn’t come over as a cheap phone. That means it needs to feel solid in your hand, and look good when its sitting on a table. If there’s more than a hint of cheap nastiness about it, then it’ll have lost a fair percentage of potential buyers right at the start. Surprisingly, given the Moto G’s final price point, it has neatly avoided this unfortunate pitfall.

Can a phone priced at $180 really rise above mediocrity, become desirable, and live up to Motorola’s hype?

Out of the box, it has a gently curving matte black, plastic rear cover, which attaches to a shiny plastic body. The option is there to customize the phone using colorful rear covers if you want something more funky. The phone feels comfortable to hold, but it’s quite heavy at 143 grams, nearly 40 grams more than the Galaxy S4 Mini. The rear panel is an absolute fingerprint magnet, and quickly gets covered in unpleasant greasy smears.

It’s obvious the Moto G isn’t a premium smartphone, but it’s still sturdily built, and the chassis doesn’t creak or groan when you try and flex it. The screen is covered with Gorilla Glass 3, and the phone is supposed to be splash proof, although it has open ports for the charger and headphones, so a good dousing will almost certainly still cause problems.

Put next to the Nexus 5, the Moto G’s curvy body manages to look almost as modern, and the minimalist design – a small Motorola logo accompanies the camera lens and flash around the back – is suitably restrained. The Moto G is no beauty, but it’s far from ugly, and it won’t be turning any stomachs when you flash it around to your mates. While no-one is going to believe the Moto G costs $600, few will believe it only costs $180 either, and that’s impressive.

Motorola is owned by Google, and following on from the Moto X, the Moto G is another attempt to rid the world of the hateful user interfaces manufacturers love to slap over the top of Android. They’re messy, slow, annoying and, worst of all, unnecessary, abecause Android on its own looks clean and compares well to Apple’s iOS.

Our Moto G uses Android 4.3 Jelly Bean, but when it arrives in the United States early next year, the phone will have Android 4.4 KitKat pre-installed. When it does hit the States, the little Moto G is going to be an absolute stormer. Even with just 4.3 onboard, it’s slick, smooth, fuss free and in the time we used it, perfectly stable. Having used Android 4.4 on the Nexus 5, we have a feeling the G is only going to get better.

Although the phone runs stock, off-the-shelf Android, there are a few little additions from Motorola. First up, and probably the most helpful, is Motorola Protect, which acts like Apple’s Find My iPhone. It links the Moto G to your Google account, where you can remotely locate the phone, lock the screen, change passwords and more, all in the name of security.

Motorola Assist silences your phone either when you’re sleeping – you can designate a time – or when you’re in a meeting, something it works out on its own if you use Google Calendar. There’s also a handy auto-reply feature. Finally, there’s Motorola Migrate, which helps transfer data from your old phone over to the Moto G.

None of these are particularly groundbreaking, but if you don’t want to use them, they’re easily ignored. However, Motorola’s apps at least have a purpose, so you don’t mind them being pre-installed, unlike other manufacturer’s software, which often seems to have been created purely to give the software engineers something to do.

While I get the impression Samsung thinks TouchWiz elevates Android above the competition, in reality, the clean installation of Android 4.3 on the Moto G makes it feel far more mature and user friendly. Put it up against less popular manufacturer’s interfaces, like ZTE’s MiFavor or Huawei’s Emotion UI, and it’s worlds apart. Another tick in the premium feel box for the Moto G.

A slim bezel surrounds the 4.5-inch touchscreen on the front of the Moto G, and 1280 x 720 pixels are on display. This gives the screen a pixel density of 329ppi, which Motorola gleefully explained during the launch event, was more than the iPhone’s highly regarded Retina Display.

It is beautiful, too. Even at half brightness, colors are vibrant and the whole image pops off the screen. Turn it up to full and it goes a little over the top, with whites dominating the spectrum. It’s very difficult to say anything against the Moto G’s screen. Like the Moto X and the HTC One Mini, it’s just right in both size and resolution.

The processor Motorola has chosen is Qualcomm’s Snapdragon 400, which runs at 1.2GHz and has 1GB of RAM to accompany it. It’s essentially a slower version of the chip found inside the HTC One Mini, not that you’d ever know, as the Moto G is a little rocket. Putting it through a Quadrant benchmarking test saw it achieve a score of 8616. On GeekBench 3, a multi-core score of 1030 and a single-core of 338 was registered. As a comparison, GeekBench shows the HTC One Mini with a multi-core rating of 870.

If it’s relative freedom from the charger you’re looking for, then the Moto G provides it.

All this glowing praise has to stop at some point, and we’re brought back down to earth when we talk about storage space. For your $180, you get a whole 8GB, of which 5.5GB is available for your use. Don’t get any ideas about expanding it on the device either, as there’s no MicroSD card slot. A 16GB version of the Moto G will be available for $200, which doesn’t destroy the phone’s great value, and would help give it a longer life.

We’ll continue down the negative path. The Moto G doesn’t have 4G LTE, but anyone who whines about its absence is entirely missing the point of the phone. I found the gyroscope gets overexcited, and the screen rotates at the slightest change in orientation. The external speaker is a strange one, as at anything less than half volume it’s almost entirely silent, but push it up to a notch below full, and it’s earsplitting.

Staying with the audio, using headphones and listening to Google Music showed the Moto G has some real power, as it’s very loud and can push out plenty of bass. Putting a few calls through the Moto G revealed it to be a perfectly competent communication device.

The lens to the 5-megapixel camera is mounted top-center on the rear of the Moto G, and a small LED flash sits just beneath it. There’s a 1.3-megapixel camera around the front. Motorola has added its own interface to the main camera, which is easy to use, and hides both HDR and a slow-motion video capture (although only at 720p) mode.

Testing the Moto G out on a very bright morning produced some great pictures, showing it can do the business in the right conditions, but inside it wasn’t so good. It was difficult to avoid blur when shooting a model village up close in poor lighting, and there’s no image stabilization to help out.

Provided you don’t expect it to measure up to top-of-the-range camera phones, and only want to share pictures through social media, then it won’t be a disappointment. The forward-facing lens did a good job during Hangout video calls though, suitably impressing the person on the other end with its crisp image.

Freedom from your charger

This is the Moto G’s trump card. If you haven’t been convinced so far, then it’s about time to get serious. I put the Moto G’s camera through its paces in a single day, along with app and game tests, and fiddling around with the settings. I made sure a Live Wallpaper was running, and it had Bluetooth on to connect to my Pebble smartwatch. After 32 hours, the battery had 10 percent left. Under more normal use, the battery extended to nearly three days. If it’s relative freedom from the charger you’re looking for, then the Moto G provides it.

The Moto G has consistently lived up to every expectation I had of it, and performed like a phone that costs twice its price. It so completely obliterates its natural competition, that anyone wanting an Android smartphone outside of the top echelons, would be crazy not to give it try. Its excellent performance and almost ridiculous $180 price tag makes it the bargain of the year, and the pull of stock Android with that cool Google backing makes it desirable. Job done, Motorola.