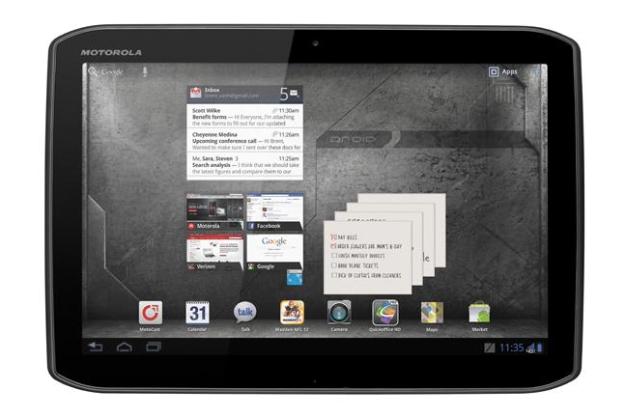 “If you want a solid Android tablet that competes with the iPad on weight and thickness, plus 4G LTE connectivity, the Motorola Xyboard 10.1 is probably your best bet.”

Motorola made a big bet on the original Xoom tablet in early 2011. Developed with Google, it was supposed to usher in the Android tablet era much as the original Droid helped usher in Android smartphones. Unfortunately, it’s been a rockier start for Android than Motorola and Google had wished. Nearly every Android tablet faced low sales last year. Now that prices are dropping, more people are buying them, but the market was so bad here in the US that Motorola and Verizon have decided to rename the successor to the Xoom (the Xoom 2) as the Xyboard 10.1. We’re not sure the new name will help, but hey, it’s still the same Xoom experience, and that’s not a terrible thing. The 4G LTE speeds aren’t bad either.

The Xyboard hardware retains some of the odd characteristics of the Xoom, but it’s a definite improvement in most every way. Motorola has taken steps to make the Xyboard almost as thin (8.8mm vs. 8.6mm) and almost as light (21.13oz vs. 19.75oz) as the Samsung Galaxy Tab 10.1. This is an achievement, especially considering the iPad 2 is 8.8mm thick and weighs 21.28oz. Not bad, but we look forward to even lighter tablets. Using the Samsung Galaxy Tab 8.9, which weighs under a pound, really felt a lot nicer, despite being just a few ounces lighter. There is room for improvement in this area, but Motorola is definitely keeping up.

The Xoom had a body made mostly of metal, but the Xyboard sacrifices its looks for a bit of grip. Motorola has added a lip on the two sides (when held in landscape orientation) of the Xyboard and covered the back edges with the rubberized coating it’s known for, making the Xyboard one of the nicer tablets to hold. Its edge digs into your hand just enough for you to know you’ve got a grip, but not enough to be terribly uncomfortable. 10.1-inch Android tablets are an odd size, and only really exist because Apple chose 9.7 inches as the size of the iPad. (We prefer sizes in the 8-to-9-inch range, which still offer all the benefits of a larger screen, but are small enough that you can do a bit of thumb typing if you’d like.) Between the rubberized edges, the back of the Xyboard is all metal and has a nice, premium feel to it.

Thankfully, Motorola has ditched its proprietary charging port in favor of USB charging, meaning you can use any phone charger in your house to juice the Xyboard up. The micro USB, micro HDMI, and micro SIM ports are all on the bottom when in landscape mode (the default for this tablet). The audio jack and an infrared sensor are on the top, along with two speakers and the front (1.3-megapixel) and rear (5-megapixel) cameras.

The oddest part about the Xoom has returned too: All the buttons are on the back. We’ve never gotten used to the odd positioning of the power button on the back of the Xoom, and the awkwardly small volume toggle on the side, but the Xyboard has a much better setup. Because the edges of the tablet are so sharp, the power button and volume toggle are on the back of the tablet, but are placed quite well. Both buttons sit near each other and are placed right where you naturally grab the tablet, allowing you to naturally press them whenever you wish.

Despite Android 4.0 being available, the Xyboard 10.1 still runs on Android 3.2. This isn’t a huge deal as the operating systems look quite similar, but there are a few nice enhancements that should come to Xyboard owners when Motorola finally releases an update for the tablet. Being able to swipe away running apps, track data usage, more easily place widgets, and access an improved unlock screen are a few of the outwardly visible enhancements.

Android Honeycomb has always been kind of a bore to use since its debut. It has a bland Tron look to it and doesn’t utilize touch in unique ways by allowing swiping or other intuitive gestures. Mostly, you end up tapping the screen a lot. Motorola has made some minor changes to the user interface (UI), sprucing up the onscreen navigation and clock fonts and including some of its own widgets. But like all Motorola and Verizon devices, the Xyboard is loaded with dreary grey and red backgrounds and widgets. Seriously guys, there’s nothing wrong with colors that aren’t dull and bland. Luckily, you can change the background if you’d like.

Motorola has included a few enterprise-like apps such as Polycom (video conferencing), Quickoffice, a task manager, and GoTo Meeting, but these are mixed in with other preloaded apps that are just the opposite: Netflix, Blockbuster, Let’s Golf 2, Madden NFL 12, Slingbox, and Skitch, a girly drawing app. We’re guessing Verizon had most of these apps added, but they are an odd mix.

Motorola has launched its own app store as well, called MotoPack. Luckily this store re-routes you back to the Android market for actual purchases. If it didn’t, things would get confusing.

Finally, the Xyboard, like a lot of newer devices, can be bought with a capacitive stylus. There isn’t much software available for the stylus, but a note-taking app has been built into the operating system. By tapping on a note icon in the lower right, you can open up a movable notepad. We had no issue with this feature except for one thing: It’s impossible to shut down. There is no way to end it unless you hit the back button. Even then, it will remain in the background. It would be nice to be able to shut off or disable this feature for those who don’t want it or tire of taking notes. The back button should not be a catch all for lazy developers. Still, for those who want to use a stylus, the software is decent enough.

Internally, the Xyboard is almost identical to every first-generation Android tablet, including the original Xoom. It runs on a 1.2GHz dual-core processor, 1GB of RAM, and 16GB, 32GB or 64GB of internal storage. All the normal sensors and special features are present: GPS, accelerometer, digital compass, barometer, etc. There is no microSD, sadly.

We ran a Quadrant benchmarking test and the Xyboard scored an impressive 2,800, outpowering the Galaxy Tab 7.0 and 8.9, which each scored between 2,000 and 2,500. For reference, an original Motorola Droid would score about 300 to 400 in a Quadrant test.

The front and rear cameras are present and take pictures and 1080p video, but these are not impressive. We did limited testing of the Xyboard’s rear camera in dim, macro, outdoor, and indoor environments, and found it to be rather crappy at almost everything. Pictures were washed out and grainy. The shutter speed is quite slow. Much like most Motorola devices, this will take pictures in a pinch, but don’t buy the Xyboard if camera quality is your number one concern.

We cannot decide if the screen is an improvement over the Xoom. It has the same 1280 x 800 resolution that most Android tablets (and high-end Android smartphones) have, and the screen uses IPS LCD technology, which looks good, but isn’t as impressive as it was a year ago. After using a Galaxy Nexus (which packs just as many pixels into a 4.6-inch display), it’s hard not to notice how big the pixels are here. It will be nice when Apple and the rest of the industry double the resolution of these tablets in the next few months.

We tested the 4G LTE Verizon version of the Xyboard, though there is a Wi-Fi-only version available. In Manhattan, New York, we attained speeds that were somewhat atypical of Verizon’s network. We averaged about 2 to 5Mbps down and 0.5 to 1Mbps up. We tested out the same network in the same location at the same time with a Galaxy Nexus and achieved higher download speeds (5 to 6Mbps) and upload speeds (2 to 5Mbps). Both results are slower than our Manhattan tests in December with the Galaxy Nexus and other devices.

It’s good. We have not performed a full battery rundown test, but the device can keep a charge on idle for at least a week and appears to get about 8 to 10 hours of life when used extensively. Obviously, if you spend your days streaming Netflix over 4G LTE, then the battery will drain faster than it will for someone who just browses the Web or plays with some apps every day. Overall, the Xyboard is in line with comparative devices, if not a bit ahead. Good battery life on this one.

The Motorola Xyboard 10.1 is a decent device, if a bit after its time. Though one of the chief reasons the original Xoom didn’t sell well was its $600 to $700 price, Motorola hasn’t lowered the bar much. A 16GB Wi-Fi Xyboard will run you $500, with an LTE version costing $530. This pricing is in line with the Apple iPad 2, but far more expensive than most Android tablets these days, which are now priced between $200 and $400 by most manufacturers.

Still, if you want a solid Android tablet that competes with the iPad on weight and thickness, plus 4G LTE connectivity, this is probably your best bet, unless you’re in one of the few markets served by AT&T’s blossoming LTE network (go for the Galaxy Tab 8.9 LTE in that case). It’s constructed well, has standard specs, and it should be getting an Android 4.0 update soon. If you have the money, the Xyboard is a good buy.