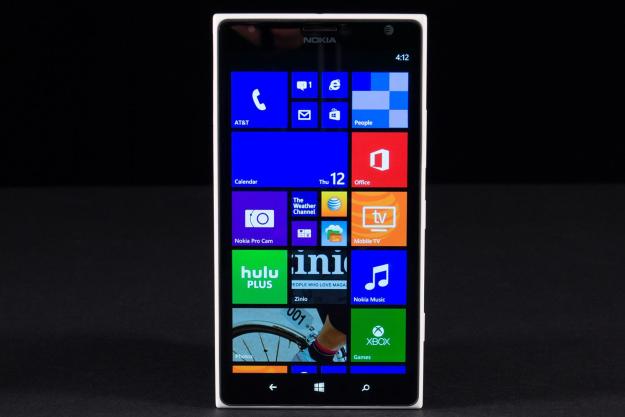 “Nokia may be calling it quits, but this is its best phone yet. Though too large for some, it’s the most powerful Windows Phone we’ve tested and a great reason to consider the platform.”

Nokia may have sold its phone business to Microsoft, but it’s not going out without a bang. Now available on AT&T, the Lumia 1520 is the most powerful Windows Phone we’ve ever used, and the first phablet to arrive for the platform. If you like Microsoft’s phone OS and have big pockets, this may be your dream phone.

Nokia isn’t reinventing its style in its last phone. The 1520 has the same boxy, but rounded shape as almost all of its Windows Phones – perhaps most resembling a very large Lumia 920, right down to its plastic (polycarbonate) shell. On AT&T, you can buy it in white, black, red, or yellow. It also has the same uncomforts. While the soft plastic is nice to hold, it can be difficult to hold the phone and use it with one hand. Thankfully, this time around Nokia has size on its side.

If you’re buying a phone with a 6-inch screen – here are our favorite Android phablets – you shouldn’t expect to be able to hold it well. You’re lucky you can hold it at all. The Lumia 1520 is roughly as comfortable as Android phablets like the HTC One Max, Sony Xperia Z Ultra, and Samsung Galaxy Mega, though we’d say the Galaxy Note 3 may edge it out, thanks to its slightly smaller screen.

The Lumia 1520 is roughly as comfortable as most Android phablets, but the Galaxy Note 3 may edge it out.

Nokia’s odd placement of the power button under the volume toggle on the right side of the phone has finally paid off. On a giant phablet, a power button positioned lower helps out.

The audio jack is dead center on the top of the phone, the speaker is rear-facing on the bottom, and the Nano SIM/MicroSD slots are on the upper left, accessible only if you happen to have a paperclip. The speaker gets loud, but the lack of stereo sound on a phone this large is noticeable when watching video. All the sound will bellow out of the side of your phone, vibrating out a little too much. We got much better quality sound out of the Moto X and iPhone 5S, though not as loud.

As a disappointing side note, Nokia sells a cover that resembles an Apple SmartCover, but it’s not. It isn’t magnetic and isn’t worth the money.

1080p screens have been on phones for a year, but now Windows has them, too. The major benefit to the Lumia’s large, pixel-dense screen is more space for Live Tiles. The Start screen can now hold a grid of 6 by 10 small Live Tiles, or 60 apps at once, though you’ll often use larger 4-by-4 or 8-by-4 size Tiles for styling.

As usual, Nokia’s screen is gorgeous. Though it isn’t AMOLED, like many of Nokia’s Windows Phones, the 6-inch 1920 x 1080 pixel IPS LCD quality is satisfying, with deep blacks and accurate colors.

Aside from the added Start screen space, Windows Phone 8 is mostly unchanged. So, like all Lumia phones, your enjoyment of the 1520 is, in many ways, out of Nokia’s control. Though Windows 8 is out, many people are still unfamiliar with Windows Phone, and find it odd to use. For new smartphone users, it will work fine, but those converting from or iPhone may have some trouble adjusting. There are big, obvious differences like the replacement of a homescreen of icons with a Start screen full of Live Tiles and a general lack of notifications, but honestly, now that you can resize the tiles on your Start screen, you can do a lot of cool stuff. Windows Phone lets you “Pin” shortcuts to apps and games to your Start screen. These Live Tiles can show how many emails you have, animate, and show a ton of other information. If you’re still confused, here are a few ways to customize your Start screen.

We’ve also put together a ton of WP8 tips and WP8 problems and bugs for those of you making the leap.

There are other differences, many of them good (People Hub), and others annoying (no notification center). But the big yay or nay for Windows Phone comes down to apps. Though Nokia has included a lot of awesome custom apps for its Lumias like Nokia Maps + Drive (turn-by-turn navigation), Nokia Transit directions, Nokia Music streaming, Nokia Pro Cam, and an app that very effectively recommends other good apps.

For the first time we have a Windows Phone running on cutting-edge specs.

Nokia is trying really hard, but if you’re an experienced smartphone user on Android or iPhone, the transition will be difficult. Some of your apps will not be present. Windows Phone still gets the shaft when it comes to apps. The library is growing and is starting to get pretty robust, but there are many omissions. Games are particularly weak compared to Android and iPhone.

Again though, if you’re willing to adjust and try something new, Windows Phone 8 is worth a go.

For the first time we can say that this Windows Phone is running on cutting-edge specs. It has a Qualcomm Snapdragon 800 processor, 2GB of RAM, 32GB of internal memory, a MicroSD slot, a 6-inch 1920 x 1080 pixel LCD screen, a 1.2-megapixel front camera, and a 20-megapixel rear camera.

On the battery side of things, the 1520 packs a hefty 3,400mAh lithium ion battery. We found that it got at least three weeks of life on standby and holds up well over a day during heavy use. This phone has great battery life.

Nokia’s mobile cameras have improved a lot this year. The Lumia 1020 has the best camera we’ve ever used on a phone. Though the 1520 doesn’t have the 41-megapixel shooter its predecessor did, it’s a solid 20-megapixel camera that appears to be a small step up from the 8-megapixel cameras in the Lumia 928 and 925. Though it can’t compete with the iPhone 5S in every shot, its focus light helps the 1520 produce better low-light shots (without flash) than most other smartphones. Macro shots also come out particularly detailed, though Nokia’s color filters sometimes work a little too hard to distort reality (and make things look better than they really do).

Overall, this is a fantastic rear camera that suits a high-end phone.

The Lumia 1520 is the best Windows Phone we’ve ever reviewed. The only things holding it back are its large size, which will alienate many buyers, and WP8 itself. It’s a fitting end to Nokia’s phone legacy: fantastic hardware that would sell far better if it ran different software. Our hopes for an phone from Nokia may be dashed forever, but we’re happy to see the Finnish phonemaker go out strong. You can buy the Lumia 1520 on AT&T for $150 to $200 on contract, or $630 unsubsidized.