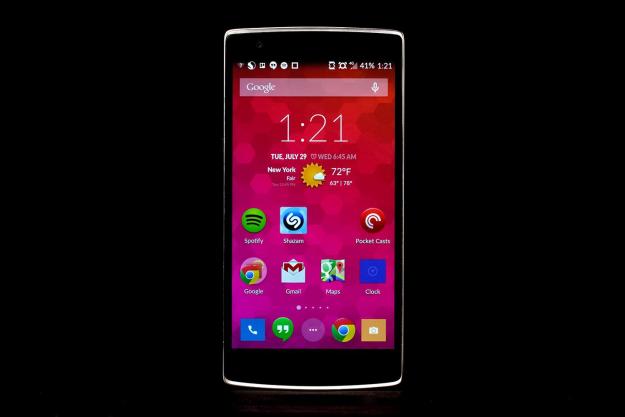 “OnePlus One is a huge bargain on paper, but we don’t recommend it. This phone is chock full of annoying bugs and issues, and customer service isn’t up to par.”

I’m trotting down Broadway to the tune of Tom Petty’s new album, and I couldn’t be happier. Who wouldn’t love a little Heartbreakers on a cool summer evening? But just as the smooth rasp of Power Drunk heats up, so does my front pocket.

I pull out the OnePlus One. The screen is on, the camera app is running, and the built-in flashlight is stuck on, blinding me. I turn it all off, pocket it and keep walking. Half a block later, my leg is hot again. And the screen is on again. I turn it off and put it back.

A block later, it happens again.

This turns out to be one of many small, annoying bugs I discovered in my weeks with the OnePlus One. A double tap on the screen turns it on, it’s way too sensitive, and though there’s an option to turn it off, it doesn’t work. Though these hiccups don’t individually ruin this exciting phone from a fresh-faced company, collectively they’re enough to make you realize that the promise of champagne on a beer budget comes with a hangover.

A dream come true, on paper

The One’s design lacks the refinement of established competing products like Galaxy S5.

I want to like the OnePlus One. It comes from a Chinese startup bent on disrupting the high price of smartphones, and on paper it nails that goal: At $300 unlocked, it costs half the price of familiar competitors like the Galaxy S5 and iPhone 5S.

But the numbers don’t tell the whole story.

Ordering is a nightmare

Let’s take a step back for a minute, remove the earbuds, and turn off Tom Petty. Getting a OnePlus One is not an easy task. It’s a waiting game that makes the mad scrum to buy an iPhone look like an orderly line at the bank.

If you don’t participate in one of the company’s tone-deaf marketing campaigns, you have to enter an unknown queue and wait an unknown amount of time. Our “invite” to buy the phone only arrived after many weeks of waiting, and though it said it was good for seven days, it expired prematurely, leaving us back in the cold. Customer service told us we were out of luck and should have acted sooner, but after a good deal of nagging, back and forth, and escalation, we finally reclaimed the sacred privilege of buying the phone.

Don’t expect great customer service from OnePlus. As it turns out, Apple does use that extra $350 for something.

The One looks good enough, with a simple silver bezel on its front and a grippy plastic shell that feels almost like a more comfortable version of fine sandpaper. But it lacks the refinement of established competitors.

The 5.5-inch screen makes the phone roughly the size of a Galaxy Note, and a little unwieldy for many people. Even if you have NBA-player hands, it will feel boxy and a little uncomfortable.

Putting size aside, the power and volume buttons are too thin, difficult to find, and similar to one another. The volume rocker is small and located at about the same height as the power button, which makes them tough to distinguish in your pocket. A top-mounted audio jack also makes stowing it while listening to music awkward, since the phone will be upside down if you pull it from your pocket the most natural way. Many new phones, iPhone 5S included, have headphone jacks on the bottom for this reason.

The haptic navigation buttons (Menu, Home, Back) are also dimly lit, though you can choose to use on-screen navigation if you wish.

CyanogenMod looks good, but what’s with the bugs?

CyanogenMod is a version of Google’s Android operating system that hackers and Android fans have modded and customized. While it gives you many options, it’s not as user friendly as Google’s standard version of Android, Samsung’s TouchWiz interface, or HTC’s Sense UI. There are conflicting settings, and aspects of the interface can be confusing. For instance, there’s a refresh circle in the pull-down notifications menu. I’ve pressed it a few times, but I still don’t know what it does. Is it for rotation locking? Data access? I don’t know.

I’ve been reviewing phones since 2007, and I can’t remember the last high-end phone that had more small issues.

That said, we like that we received an OS update or two while using the phone (any update is a rarity on an Android phone).

But then there are the bugs. We encountered a whole host of problems that could be fixed with a reboot, indicating they’re software issues. For instance, the LTE signal will randomly go dead until you reboot it. The Wi-Fi randomly shuts off, and the on/off toggle locks in place until you reboot it. Call volume can be low, you may not be audible to the person on the other end at all. The list goes on.

These are the kind of phone problems that drive you mad. I’ve been reviewing phones since 2007, and can’t remember the last high-end phone that had more small issues.

OnePlus One users on the company’s forum have reported some of the same troubles, along with screen yellowing, faulty touchscreens, and poor customer support. Some users allege that OnePlus staff deletes and merges threads to downplay complaints, and have called issues like screen yellowing a “feature” and not a problem with the device.

Generally, photos come out well enough on the One’s 13-megapixel rear shooter, though it has a tough time balancing bright light, and often over-silhouettes objects you’re photographing. Night shots are also legible, but again tend to be overly bright or overly dark. Our sample shots of the George Washington Bridge show that the OnePlus One generally takes good photos. But like everything else with this phone, it’s plagued by bugs: The camera doesn’t always recognize its orientation, so half of your photos will look sideways when you go back to look at them.

Thanks to the efficient Snapdragon 801 processor and a large 3,100mAh battery, the OnePlus can last as much as two days on a charge, if you aren’t using it much, but generally I seem to hit about 35 percent battery drain by evening time. During out testing, I used Qualcomm’s Snapdragon battery guru, which I recommend downloading, since there is no built-in battery-saving mode on the One.

If you’re a geek willing to tolerate a lot of bugs, glitches, quirks, and poor customer service for a low price, the OnePlus One remains a good deal. This is essentially a Galaxy S5 (without waterproofing) or HTC One M8 for half the price. It can be a speedy, awesome Android phone … when you’re not killing half an hour on the sidewalk trying to keep it from turning on in your pocket.

Most reviews of the OnePlus One are glowing, but most of the people writing them didn’t actually order a production unit, and didn’t use it for nearly a month. As a primary phone, the OnePlus is simply too unreliable. If you experience even half of the issues I did, you will be in for a frustrating time. Budget-conscious buyers will be better off just paying $350 and getting a Nexus 5.

The OnePlus One is trying to play on the grand stage, but it hasn’t rehearsed enough. Updates may eventually resolve many of the bugs that cripple the phone now, but right now we just can’t recommend it.

Topics
Video-editing app LumaFusion to get a Galaxy Tab S8 launch
First Google Pixel 7a renders show a modern, sleek design upgrade
The best Christmas apps for everyone in 2022
The best smartphone stocking stuffers for the 2022 holidays
When is my phone getting Android 13? Google, Samsung, OnePlus, and more
Audible Cyber Monday deal drops the price of Premium by 60%
This is your last chance to get 3 months of Kindle Unlimited for just $1
My favorite iPhone MagSafe in-car holders are Cyber Monday bargains
Surprisingly, the iPhone 14 Pro can’t win this epic camera shootout
5 things that would make the Google Pixel Fold next year’s best foldable
Apple Music Replay 2022: where to find and how to see your listening stats
Hive Social is my favorite Twitter alternative, but that’s not saying much
Best Cyber Monday iPad Deals: iPad Air, iPad Pro, iPad Mini