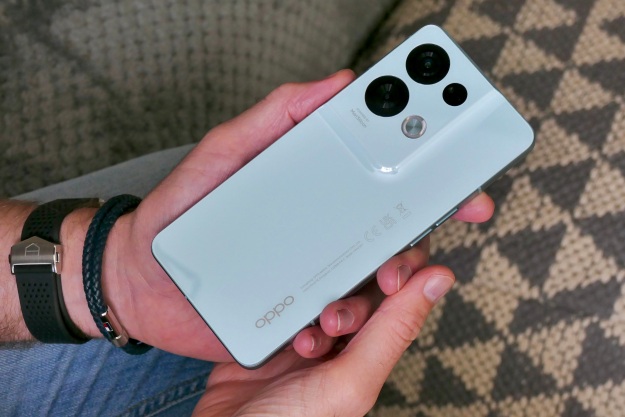 “The Oppo Reno 8 Pro's cool design, strong performance, long battery life, and fast charging make it a great value. But using anything other than the main camera disappoints.”

The Oppo Reno series has been around for a few years and has previously broken new ground in the industry — a Reno was the first phone in the U.K. with 5G. The latest is the Reno 8 Pro, and it’s not what you’d call groundbreaking this time around.

Instead, the Reno 8 Pro is a competitor to the OnePlus 10T, trying to strike the same balance between price, design, performance, and desirability. OnePlus got a lot of things wrong on that phone, so can Oppo (which, don’t forget, is OnePlus’ parent brand these days) get it right?

The Reno 8 Pro is a great-looking smartphone and one you’ll be proud to carry around. Oppo has mastered the integrated camera module look on its phones (and those from OnePlus now, too), and although the camera module on the back of the Reno 8 Pro is big, the gentle curve around it minimizes its impact. It gives the phone a real identity.

It’s a good thing those curves are there because, otherwise, the Reno 8 Pro is very flat. The chassis has flat sides, the glass covering the screen is flat, and the rest of the rear panel is flat too. It’s moderately comfortable to hold (the edges are a little sharp), but the low 186-gram weight really helps avoid much fatigue. While it’s all made from glass, it is Gorilla Glass 5 on the front and back. The phone has a basic IP54 water resistance rating for a decent degree of everyday protection.

The low weight and pleasing in-hand feel have made the Reno 8 Pro wonderful to use. It has happily slipped into my pocket without a fuss and has just the right style to attract attention when it’s on show. The small bezels around the 6.7-inch AMOLED screen give it a very modern look from the front.

There are two colors available: an ordinary Glazed Black model and the Glazed Green seen in our photos. It’s hard to do the color justice, as the cool, minty green looks superb in real life. It’s certainly the one to get if you don’t mind a bit of flamboyance.

The Reno 8 Pro uses the same main camera as the Oppo Find X5 Pro, a Sony IMX766 50MP. But rather than using two, it sits next to a fairly standard 8MP wide-angle camera and a positively underwhelming 2MP camera. This makes it the same setup found on the OnePlus Nord 2T and the OnePlus 10T. On the front is a 32MP camera with autofocus, complete with some new wizardry allowing it to pull in 60% more light than previous Reno phones for nighttime selfie fun.

Oppo differentiates the Reno 8 Pro’s rear camera from the OnePlus models by adding its MariSilicon X image processing unit, which apparently improves lowlight performance in both stills and video, among other things. The IMX766 main camera does take very attractive photos, with a wonderful natural color palette, a lot of detail, and a pleasing HDR effect in the right environment.

The wide-angle suffers from the same problems as the camera on the OnePlus 10T. The low resolution means photos have noticeable pixelation, there’s visible noise in almost all images, and the poor contrast obscures detail. It’s really not very good at all. There’s a 2x digital zoom shortcut, but use this at your peril because it employs a huge amount of smoothing, making photos look artificial.

What about the selfie camera? It’s not bad at all. There’s a good level of detail, autofocus helps the portrait mode with accuracy, skin tones are warm, and there’s a handy palm recognition gesture too. At night, which is where the MariSilicon X ISP is supposed to work its magic, the phone automatically uses the screen as a fill light — resulting in surprisingly detailed selfies even in the dark. If you use it without the screen’s fill light, the results are useless

Lowlight photos, in general, are good. However, I have noticed it’s easy to introduce blur, despite the software only taking about a second to snap a photo in the dark. You can see an example in the gallery above. The Reno 8 Pro’s camera is otherwise the same as the OnePlus 10T’s, where the main camera shines by taking really eye-catching photos, but the other cameras fail to stand out due to low resolution and a lack of detail.

The main camera is good, the front camera takes nice-looking selfies, and the phone has a pretty design, but it’s the processor that I found intriguing. The Reno 8 Pro has MediaTek’s Dimensity 8100+ chip with 8GB of RAM inside, and it has been a really strong performer. It seems to be adept at sipping power when it’s not working hard, so the battery life from the relatively small 4,500mAh battery has been decent in general use situations. Playing Asphalt 9: Legends is no issue, even during the long, chaotic races. During these intense gaming sessions, there’s almost no heat buildup on the back of the phone at all.

Oppo’s ColorOS 12.1 based on Android 12 is installed, and it’s the same experience as you get on the Oppo Find X5 Pro, which you can read more about in our full Find X5 Pro review. It’s also very similar to the software on the OnePlus 10 Pro. While fast and reliable, ColorOS loves to interrupt with many system notifications and can be aggressive with power management, meaning a lot of features like the always-on screen are off by default and require setting up before use.

It has been a fuss-free time with the Reno 8 Pro, and that’s exactly what I want.

The 6.7-inch AMOLED screen has masses of color and really strong contrast levels, so it’s always eye-catching, and that’s without the color boost enhancer mode switched on. Dig into the settings, and there are ways to calm the screen down if you don’t like the vibrant visuals. Watching video is enhanced by the great stereo speakers, which may not have much bass but make up for it with lovely clarity.

It has been a fuss-free time with the Reno 8 Pro, and that’s exactly what I want from an everyday, jack-of-all-trades phone. The software is still annoying for the first few days, and it irritates me with its constant “this app is using power” reminders until I tell it to stop. But with luck, some of this will be fixed with Android 13-based ColorOS 13, which is scheduled to arrive on the Reno 8 Pro in September.

After using social media, messages, a few apps, and notifications, plus taking photos and being connected to a smartwatch, the battery in the Reno 8 Pro has easily lasted for two days before it needs a recharge. Work the phone harder, and you won’t reach this. Expect around 10% of the battery to disappear after 30 minutes of gaming.

The phone uses Oppo’s 80-watt SuperVOOC fast charging system, and in just 11 minutes, the battery reaches 50% charge. In 30 minutes, it’s completely full. Rather than the camera or design being the main reasons to buy — they’re great, but hardly unique in the world of midrange phones today — the performance, battery life, and fast charging are far more beneficial and relevant during everyday use. The results are in line with Oppo’s claims, which is great. The lack of wireless charging isn’t so good, though.

Even if you do stretch the limits of the battery, the fast-charging system means — provided you’re near a wall socket and have the proprietary charger and cable — the phone shouldn’t ever be left with no charge at the end of the busiest days. Charging a phone in 30 minutes also means saying goodbye to overnight charging. If you’ve never tried a phone with charging as fast as this before, it can change your life.

The Oppo Reno 8 Pro is available in the U.K. starting September 1 for 599 pounds, which is around $702. You can buy it through Oppo’s own online store or a variety of retail stores, including Amazon, Argos, and Currys, plus networks including EE, O2, and Vodafone.

If you’re tempted, then it’s worth buying before September 28, as Oppo will send you an Oppo Pad Air tablet (worth 239 pounds) for free with your Reno 8 Pro purchase, making the phone a really great value.

Oppo does not sell its smartphones in the U.S., so you’d have to import the Reno 8 Pro if you’re really keen on owning one.

The Oppo Reno 8 Pro costs a little less than the OnePlus 10T, and the primary difference between them is the OnePlus phone has a Qualcomm Snapdragon 8+ Gen 1 processor and slightly faster charging. While the Snapdragon chip in the OnePlus is undeniably excellent, I’ve had no problem with the MediaTek 8100+ here, and unless you’re set on playing intensive games for hours, I doubt most will notice much difference day-to-day.

If your only choice is between the Reno 8 Pro and the OnePlus 10T, then the Oppo phone is the one to buy. It’s a little cheaper, the materials used are far higher quality, the design is prettier, it charges almost as fast, and the software is basically the same. The difference is the processor, and considering the rest of the OnePlus 10T isn’t as desirable as the Reno 8 Pro, it’s not really worth it.

Expand your choices further, and the even cheaper Nothing Phone 1 should be considered along with the Samsung Galaxy A53 5G. In the U.S., the new Motorola Edge (2022) is good value and has a MediaTek processor with a mmWave 5G connection for longevity. The other phone to consider, should you be in a place where it’s available to buy, is the iQoo 9T, which manages to be even better than the OnePlus 10T and the Reno 8 Pro.

I’ve enjoyed using the Reno 8 Pro. It’s an attractive, capable, no-nonsense smartphone. The price isn’t crazy, but the phone manages to feel more expensive than it actually is. That’s where the OnePlus 10T got it wrong, as it managed to go in the opposite direction.