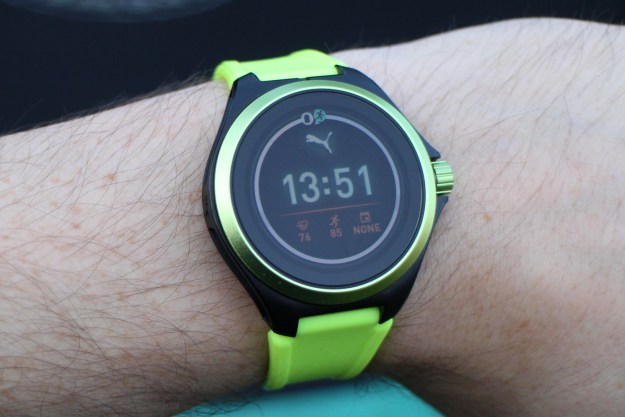 “The Puma Smartwatch certainly looks the part, but it fails to perform.”

As the third largest sportswear manufacturer in the world, Puma is a big brand, but the simply-named Puma Smartwatch is the company’s first foray into the world of smartwatches. Manufactured by the Fossil Group, the Puma Smartwatch has a familiar set of specs and runs Google’s Wear OS.

Puma has overseen the sporty design and offers an app of its own with some deeper fitness features than you’d find on typical Wear OS watches, but it’s also one of the slowest and buggiest we’ve tested — a high price to pay for fitness.

The Puma Smartwatch definitely looks the part. It’s sleek and very lightweight with an eye-catching paint job that contrasts black with dayglow yellow. This is a smartwatch that’s hard to ignore. It’s reminiscent of the Fossil Sport, but there’s just a single crown and the flanking buttons you usually find on Fossil’s smartwatches are absent.

A smooth, perfectly round, aluminum, beveled dial is held in black plastic which extends from the lugs and has cutaway portions to achieve the attention grabbing two-tone look. The crown is also yellow with the Puma logo stamped on it.

The Puma Smartwatch has a silicone band with a black latch and you’ll find that Puma logo embossed on the end. Because the Puma Smartwatch is lightweight and sleek, it slips easily under your cuff and rarely gets snagged — something that can be an issue with an oversized watch like the Diesel On Axial.

The dayglow yellow prevents it from blending in, however. The Puma Smartwatch looks out of place with a button-up shirt in an office setting or even with a casual outfit in a bar; this is a smartwatch that wants to hit the gym or go running.

I expected the silicone strap and light weight to result in a smartwatch that’s comfortable and easy to forget you’re wearing, but in reality I found the Puma Smartwatch a little uncomfortable. The textured silicone strap is a bit stiffer than other silicone straps I’ve worn.

On the plus side, it grips to your wrist and the oversized end of the strap ensures that it will never shake loose, even during frenetic workouts. Although you can switch the band easily, it may prove tricky to find an alternative that matches the body. There are four Puma designed watch faces on offer and they’re all a little dull. They don’t really fit in with the rest of the design in terms of color or look, apart from the omnipresent Puma logo.

The 1.19-inch AMOLED display looks good in the 44mm casing and it’s sharp, bright, and legible in most lighting conditions.

The Puma Smartwatch has a distinct look that matches the brand, but it feels and looks a little cheap and stands out in a bad way in non-sporty settings. There are less striking white and rose gold or black and grey color options available in some markets that might offer a bit more stylistic versatility.

While Wear OS looks good, it doesn’t perform well. This is a complaint I had with the Michael Kors Access Lexington 2, and it’s a complaint my colleague had with the Fossil Gen 5, but things are even worse with the Puma Smartwatch. I encountered a lot of random freezing when using this smartwatch, it frequently lagged when I swiped the screen, and it was consistently slow to load apps.

The Puma Smartwatch does sport the latest Qualcomm Snapdragon Wear 3100 processor, but unfortunately someone made the flawed decision to go with 512MB of RAM instead of 1GB. The difference in every day use, compared to Wear OS smartwatches I have tested recently that have the 1GB of RAM is pronounced. The Puma Smartwatch is frustrating to use; it’s slow and it has to be reset far too often.

The rotating crown works well and is the best way to get fine control when you’re trying to swipe up or down a list. You can also install a bunch of apps from the Play Store, from shopping lists to music controls to all manner of fitness options. While there are more choices than ever before, the general level of polish and functionality is not very impressive, and still pales in comparison to the Apple Watch’s dedicated App Store.

Internally, the Puma Smartwatch has 4GB of storage for music and apps. Most of the other recent Fossil releases boast 8GB.

As an unashamedly sporty device, the Puma Smartwatch has to shine in the fitness department and I think it does. You’ve got Google Fit integrated for basic tracking, there’s also a heart rate monitor, built-in GPS, and 5 ATM water resistance enabling you to swim with it on.

While Google Fit is enough for casual exercisers to chart their progress each day, more serious athletes might want to try out the PUMATRAC app that comes installed on the Puma Smartwatch, though you will also need to install the companion app (for Android or iOS) on your smartphone. PUMATRAC enables you to leave the phone at home and have the Puma Smartwatch track your heart rate, distance, pace, elevation, and calories burned. It’s also packed with workouts, allows you to set up a fitness training schedule, and even offers coaching.

I found that the Puma Smartwatch worked well for fitness tracking in general, but on a couple of occasions it struggled to establish a GPS fix and it also failed to sync with the Google Fit app on my phone sometimes. There was no obvious reason for this. Heart rate, steps, and distance data all seems pretty accurate.

Puma optimistically suggests you’ll get 24 hours of battery life from its Smartwatch, but I never came close to that. It got me through an average day, but only by switching to the battery saver mode in the evening. If you’re a very light user perhaps it will carry you to bedtime. If you want to track your heart rate and you get a lot of notifications or use other apps, then you can expect it to run out of steam in the early evening.

The charging cradle has a magnetic contact and it stays in place nicely. It only takes around an hour to charge up, but you’ll likely leave it charging overnight anyway.

The Puma Smartwatch costs $275 (or 249 British pounds) and you can buy direct from the Puma website or from various retailers. It comes with a standard two year limited warranty that covers defects in material and workmanship under normal use for the period commencing upon the date of purchase and continuing for two years.

The Puma Smartwatch is a familiar Wear OS device from Fossil that’s let down by low RAM which produces even buggier performance than your run-of-the-mill Wear OS device, and poor battery life does it no favors, either. It looks sporty and boasts a good range of fitness tracking features, but it’s too expensive for what you get.

If it’s primarily a fitness tracking watch you’re after, the Samsung Galaxy Watch Active 2 is your best bet, and it’s almost exactly the same price at $280 or $300 depending on the size you choose. It has better software, more comprehensive exercise tracking, and better battery life.

For iPhone owners the latest Apple Watch is the obvious choice. It’s a lot more expensive, starting from $400, but it’s superior in every way. If that’s too much, consider the Apple Watch Series 3 which goes for $200 or $230 depending on the size you choose; it’s still a better option than the Puma Smartwatch.

It offers water resistance up to 50 meters, but the Puma Smartwatch has an aluminum body and plastic lugs, so it’s difficult to say how well it will take the knocks. It should last a couple of years.

No. There are better options available for the same money or less.