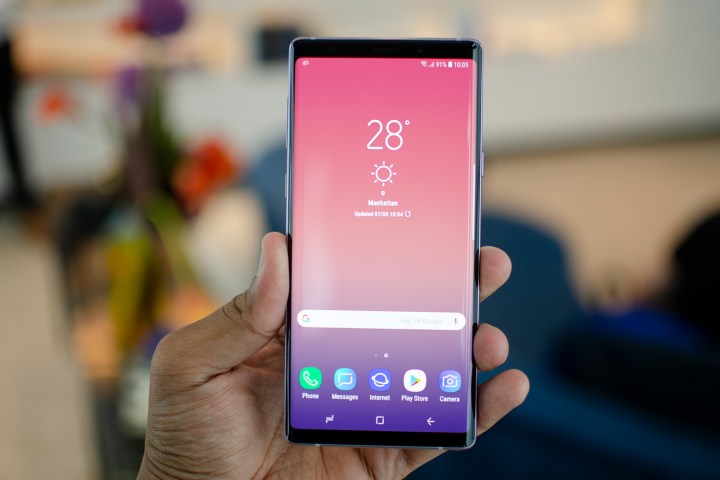 The Samsung Galaxy Note 9 is all about productivity. From its Bluetooth-enabled S Pen to its newly integrated DeX Mode, the Note 9 offers lots of ways to get work done. But how does the Galaxy Note 9 compare to the recently released BlackBerry Key2? We put the two smartphones head to head find out.

Both the Samsung Galaxy Note 9 and BlackBerry Key2 were created with productivity in mind. With that said, the Key2 features midrange specs compared to the top-of-the-line hardware you’ll find in the Note 9. Sure, they both feature the same 6GB of RAM, but the Snapdragon 845 chip in the Note 9 can run circles around the Snapdragon 660 processor in the Key2. There’s also a more expensive Note 9 model that bumps the 6GB of RAM up to 8GB and storage from 128GB to 512GB.

As for battery capacity, both phones should be able to easily get even the most demanding smartphone users through an entire day. You’ll find a massive 4,000mAh battery in the Samsung Galaxy Note 9. Although the Key2 has a smaller 3,500mAh battery, its smaller display and less-powerful processor actually give it the edge when it comes to stamina. Both phones feature a quick charge option that should get you a few hours of battery life within 15 minutes. The Samsung Galaxy Note 9 does have one major advantage over the Key2 though, and that’s wireless charging.

The Samsung Galaxy Note 9 takes the crown for this round. In addition to higher-end specs, the Note 9 features wireless charging which is sadly missing on the BlackBerry Key2.

Put the Samsung Galaxy Note 9 and Blackberry Key2 side by side, and you’ll see a study in contrasts. The Note 9 is a glass sandwich with curves all over, while the Key2 is more boxy with an rubberized aluminum back and a physical QWERTY keyboard on the front. While beauty is in the eye of the beholder, we’d venture a guess the Galaxy Note 9 will make more people swoon than its competition.

In terms of durability, things are a little more clear cut. The Samsung Galaxy Note 9 is all glass — a material that typically doesn’t fare well with drops. The Blackberry Key2, however, has an aluminum body so its likely to better withstand an accidental drop. That said, the Note 9 is IP68 certified meaning your phone won’t be destroyed if you accidentally drop it in water. Unfortunately, the Key2 has no IP rating so an accidental submersion could be the end of the line.

It’s a close call, but we’re giving the win to the Samsung Galaxy Note 9. While both the Note 9 and the BlackBerry Key2 are attractive phones, Samsung’s smartphone is more stylish. The Note 9 is also IP68 certified while the Key2 lacks water or dust protection.

When you compare the Samsung Galaxy Note 9 to the BlackBerry Key2 one of the first things you’ll notice is a massive difference in screen size, largely because of the BlackBerry’s keyboard. The Key2 has a 4.5-inch IPS LCD display while the Note 9 has a Super AMOLED display that’s 6.4-inches. Of course, size isn’t the only difference. The OLED display in the Galaxy Note 9 offers much more vivid colors and inky blacks than you’ll find on the Key2’s LCD display. And when it comes to sharpness, the Note 9 is the clear winner with 516 pixels per inch (PPI), compared to just 434 PPI on the Key2.

For this round, the Samsung Galaxy Note 9 is the clear winner. Its OLED display is nearly two inches larger than what you’ll find on the Key2 and is much sharper.

The Note 9 features a dual camera setup with 12-megapixel sensors, both with Optical Image Stabilization (OIS). There’s also a variable aperture on the Note 9 that can switch from f/2.4 to f/1.5 for better low-light photos.

In addition to impressive camera hardware, the Note 9 packs in some pretty awesome software features as well. Scene detection uses A.I. to adjust color, white balance, and other settings. There’s also a new a flaw detection feature in the Note 9 that will alert you if someone has closed their eyes when a photo is taken.

The Blackberry Key2 has a dual camera module with 12-megapixel sensors as well: The primary lens has an f/1.8 aperture while the secondary lens comes in at f/2.6. While the cameras have somewhat similar specs, the Key2 doesn’t do well in low-light and doesn’t feature any type of A.I. software to adjust the camera settings.

Another round goes to the Samsung Note 9. Its camera is more capable and versatile than what you’ll find on the BlackBerry Key2 and the addition of A.I.-powered scene detection and flaw detection means you’re much more likely to get the perfect shot.

If you’re craving Android Pie, we’re sorry to inform you that neither the Samsung Note 9 nor the BlackBerry Key2 ship with Google’s latest OS. Both phones, however, will get updates to Pie in the future. And when it comes to security updates, both Samsung and TCL send regular updates for their phones, though TCL may be a little quicker to update.

Both phones also include productivity suites to help you get work done on the go. On the Key2 you’ll find the BlackBerry Hub suite of apps; the suite includes a calendar app, unified messaging app, and private folder, amongst other things. The Galaxy Note 9, on the other hand, has DeX mode: With DeX mode you can attach the Note 9 to an external monitor to create a mobile work environment.

We’re calling this round a tie. Both phones ship with Android Oreo and should get Pie at some point in the future. And while BlackBerry features its productivity suite, DeX mode on the Note 9 is great for getting work done on the go.

The Samsung Galaxy Note 9 has a few special features that makes the phone very enticing. You’ll find a Bluetooth-powered S Pen that can control the phone remotely triggering photos, slide shows, music and other features on the Note 9. DeX mode is also built-in on the Galaxy Note 9, meaning you can use your phone as a makeshift desktop by attaching it to a monitor.

As for the BlackBerry Key2, its main attraction is its physical keyboard. Of course, the keyboard does more than meets the eye. The spacebar houses a discreet fingerprint sensor, and you can run your finger along the keyboard to scroll through webpages. There’s also the Speed Key that allows you to quickly switch between apps.

It’s a close call because both devices have really unique special features, but we’re giving this round to the BlackBerry Key2. While Samsung has really upped its S Pen game with the Note 9, we still think the physical keyboard on the Key2 is more useful for day to day use.

The Samsung Galaxy Note 9 is a premium phone that carries a premium price tag to match. The 128GB version comes in at $1,000 and the 512GB variant will cost you a whopping $1,250. The BlackBerry Key2 however sits firmly in midrange phone territory with a more approachable $650 price tag.

Our face-off ends with the Samsung Galaxy Note 9 as the clear winner. While the BlackBerry Key2 has awesome productivity features, its specs simply pale in comparison to the Samsung Galaxy Note 9, and DeX mode makes the Note 9 even more enticing to enterprise users. Honestly though, if you’re looking for a productivity workhorse, you can’t go wrong with either the Note 9 or the Key2 and BlackBerry’s phone is a lot cheaper.