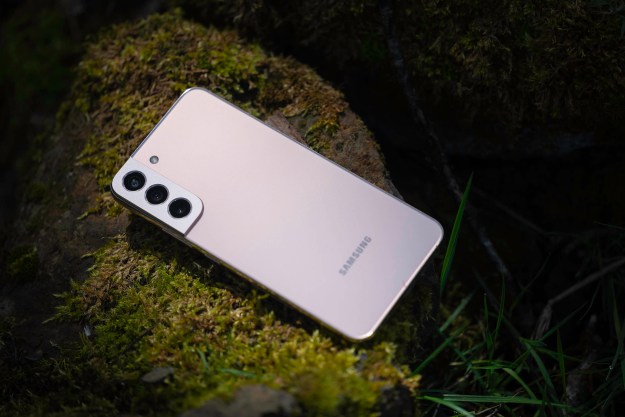 “The S22+ is a great phone that offers moderate upgrades to screen size, battery capacity, and connectivity over the less expensive S22.”

The Samsung Galaxy S22+ is certainly the odd phone out of the Galaxy family. The base-level S22 is an attractive option if you’re looking to save a bit of cash, while the high-end ultra has all the bells and whistles for the big spenders. The S22+ sits awkwardly between the two, struggling to retain a strong identity all its own. Nevertheless, the S22+ is a fully-featured Samsung Galaxy phone with an impressive spec sheet to prove it, and it’s worth checking out.

The S22+ is the overgrown twin of the S22. Unless you compare them side-by-side, the extra 0.5-inches of screen space isn’t going to be very noticeable, and visually there’s nothing else to distinguish the S22+. It’s a good-looking phone, with rounded edges that make it comfortable to hold. It’s available in a wide variety of colors, including Phantom Black, Phantom White, Green, Burgundy, and if you buy it from Samsung’s online store you can also get it in Graphite, Sky Blue, or Red.

The phone features the power and volume button layout shared by all modern Samsung phones, as well as the distinctive camera bump that’s been present since the days of the S21. As with that phone, though it may slightly unbalance the S22+ when lying on a flat surface, such protruding camera bumps have never bothered me.

The S22+ features an under-screen fingerprint scanner and is rated as IP68 resistant to water and dust. Such resiliency is essential in devices that go everywhere with us and must survive all the elements we ourselves are exposed to on a daily basis. Also, the use of Gorilla Glass Victus+ has made the screen remarkably tough. Unlike the previous generation of Galaxy phones, neither the S22+ nor my S22 Ultra has suffered from the micro scratches that seemed to accumulate so easily on the S21 series.

The 6.6-inch Dynamic AMOLED display of the S22+ is gorgeous, with deep blacks and rich colors, and is HDR 10+ certified. Its FHD+ resolution isn’t impressive on a spec sheet, but I didn’t notice any lack of sharpness because of it. The 120hz refresh rate makes for smooth navigation. The screen is flat, without the curved edges sometimes featured in Samsung phones, and has a thin black bezel.

The S22+ performed consistently well throughout my time using it. Its 8GB of RAM allows for plenty of multitasking, and the Snapdragon 8 Gen 1 processor handled every mobile application I threw at it. Dota Underlords performed flawlessly, even with the graphics settings maxed out.

The audio quality of the speakers and microphones is excellent, and I was able to easily understand and be understood when making phone calls. The speakers have decent volume and were able to output a decent rendition of 2Cellos cover of Thunderstruck.

I’ve been a big fan of Samsung’s Android interface over the years, and Android 12 on the S22+ is no exception.

I’ve been a big fan of Samsung’s Android interface over the years, and Android 12 on the S22+ is no exception. It’s intuitive to navigate and is aided by a highly responsive touchscreen. Samsung has a wide range of proprietary software, both pre-installed and available through Samsung’s Galaxy storefront. Normally I’d be skeptical of pack-in software, but I actually use Samsung’s software such as the Samsung notes, Expert RAW, and Galaxy Wearable on a daily basis.

I tested the S22+ on USCellular using the same sim card as I use in my S22 Ultra. The S22+ achieved similar results to the S22 Ultra using Ookla internet speed tests, and the S22+ in general performed as I would expect. The S22+ supports Wi-Fi 6E and Bluetooth 5.2, both of which provided excellent performance.

Of particular note is the fact that the S22+ supports ultra-wideband, which is a capability that it shares with the S22 Ultra, but which is lacking from the base S22. Such networks don’t exist in my area and aren’t widely available, but it’s nice to have if you live somewhere where ultra-wideband is available.

The S22+ is supposed to benefit from better reception in general due to its upgraded antenna, but in my tests, it offered no noticeable improvement over other phones, at least in my area. If you live in a dense urban area your experience will probably be different, but for smaller towns and rural areas, you’re likely still stuck with the same spotty service no matter which phone you use.

The S22+ features the same camera as the base level S22, which is no bad thing. The key feature here is that, rather than the disappointing digital zoom of the S21 series of Galaxy smartphones, the S22+ camera features an optical 3x zoom camera. This makes a world of difference if you lean heavily on telephoto lenses as I do. In addition to the 10MP f/2.4 telephoto camera, the S22+ includes a 50MP f/1.8 main camera and a 12MP f/2.2 ultra-wide camera. All but the ultra-wide camera feature optical image stabilization. The punch-hole selfie camera is 10MP with an F/2.2 aperture.

I was very happy with the results from all four cameras.

I was very happy with the results from all four cameras. They deliver the high-quality results I have come to expect from Samsung’s phones. The S22+ delivers sharp, richly colored photos right out of the camera, and you have the option of downloading Samsung’s Expert RAW app if you’d rather process the image yourself in Lightroom Mobile or other editing software.

If you’ve used a Samsung Galaxy phone within the last few years, the interface should be very familiar to you. Swiping through the various available settings and modes is fast and fluid, and there are certainly plenty of modes available from super slow motion to portrait and timelapse.

The S22+ can shoot video at up to 8K at 24fps, and 4K at up to 60fps. I can confirm that this phone is just as good at capturing video as it is still photos, and I’d be perfectly happy using footage from it alongside that captured using my pro-grade camera gear in my YouTube videos.

One of the key advantages of the S22+ is that it features a large 4,500mAh battery and fast 45W charging. It also supports 15W wireless charging, and 4.5W reverse wireless charging. In real-world use that translates to a phone that can easily make it through the day without needing a refill partway through.

The S22+ is available now and will set you back $1,000 at MSRP for the 128GB model, which is about $100 more than it really should be. It makes other Samsung Galaxy phones look like a good deal by comparison.

There’s no doubt that the Samsung Galaxy S22+ is a great phone, and its only real flaw is its price relative to the competition. While that seems like a small complaint, it’s a real problem for the S22+. Put simply, the S22+ is in a very crowded space, and it’s finding it hard to really differentiate itself not only from its competition but also from its siblings. The Samsung Galaxy S22+ is a great phone and the price is about right, but if you want to save 20%, you can go home with the S22. If you want a lot of additional functionality (including the “Note experience” as Samsung calls it) the S22 Ultra is just a couple of hundred more. Even the Samsung Galaxy Z Flip is at the same price point and it folds in half but is otherwise a very similar product.

This is a great phone and it checks a nice box for Samsung in the product diversity department. You won’t be disappointed with it. But it still seems like Samsung needs to do something a bit different to call this a real value for the money.

While technically superior to the base level S22, I’m dubious of the merit of spending an extra $200 on the S22+. That $200 only gets you a slightly larger screen and battery, as well as support for ultra-wideband, which is only useful to have if you live in an area with good ultra-wideband coverage. Meanwhile, the S22 Ultra is such an enormous leap over the S22+, and it’s only $200 more expensive than the S22+.

If you’re not set on a Samsung device, the iPhone 13 Pro is the same price as the S22+, and the Google Pixel 6 is $100 cheaper. The S22+ is a better buy than the similarly priced Motorola Edge+ mainly due to the better camera and water resistance of the S22+.

Samsung has committed to providing updates to S22 series phones for at least four years, so the phone should remain relevant until 2026. Given its IP68 waterproofing and my personal experience with Samsung smartphones, I think this is a pretty safe estimate for the lifespan of the S22+.

For Samsung fans, definitely. The S22+ is an excellent phone, and if you spend a grand on it you won’t be disappointed. However, there are many other options available to you that will allow you to save some money and still have a great experience. The smartphone market around the thousand dollar price point is extremely competitive, and even an almost flawless device has a hard time standing out.

Topics
Video-editing app LumaFusion to get a Galaxy Tab S8 launch
Sunbird looks like the iMessage for Android app you’ve been waiting for
The best Samsung Galaxy S22 Ultra screen protectors for 2022
The Galaxy Z Flip 5 might fix the Flip 4’s biggest design flaws
The best Android apps for December 2022
We asked the experts if biological sex affects heart rate sensor accuracy
I still love my iPhone 14 Pro, but not for the reason I expected
The best iPhone apps to download in December 2022
Instafest app: How to make your own Spotify festival lineup
How old phones became the cool, good phones in 2022
Don’t listen to billionaires like Elon Musk — app stores are fantastic
The most innovative tablets of 2022
The most innovative smartphones of 2022