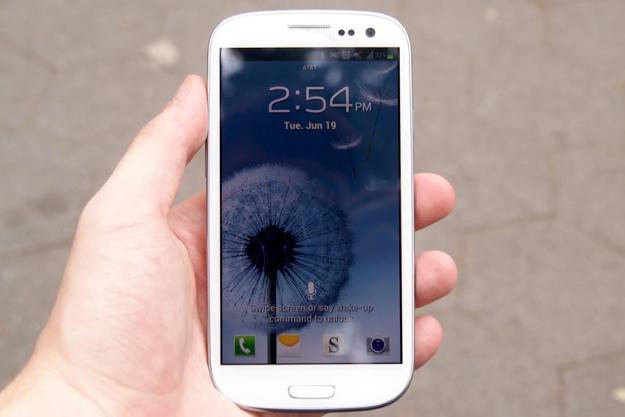 “Samsung has delivered a device that meets our expectations in almost every way except in battery life, and surprised us with innovative and quirky new software features.”

With the Galaxy S3 (or “Galaxy S III”), Samsung has done the impossible: It has gotten every major US wireless carrier to accept and sell the same phone. AT&T, Sprint, T-Mobile, Verizon, and US Cellular will all sell the Galaxy S3 within the next month. This is a remarkable feat, and one that only the iPhone could have matched (though Apple has long had more lucrative plans, forcing each carrier to make huge concessions and pay upfront to sell its coveted device). Well, now there are two huge phones on the market. The S3 is officially a force to be reckoned with. Does it deserve the honor? Find out below.

Samsung’s Galaxy Nexus had a great feel to it for such a large-screened phone (4.7 inches diagonally), but the Galaxy S3 outdoes it in almost every way. The power and volume buttons are still comfortably placed on the upper right and left sides of the phone, but the entire unit has been slimmed down to about half or two-thirds the thickness of the Nexus. The rounded edges of its predecessor have been thankfully retained and the screen bezel has been reduced, making it a comfortable phone to hold, despite sporting a slightly larger 4.8-inch screen than the Nexus.

In addition to the screen increase, Samsung has managed to get carriers to accept its physical home button (a la iPhone) on the S3, making it possible to unlock the phone with more than the power button.

We’re not quite as fond of Samsung’s decision to keep around a physical Menu button. Unlike all other Android 4.0 devices, the S3 has a haptic Menu button on its navigation bar in lieu of a Recent Apps key. Instead of hitting an ellipsis (…) button on screen, you must hit the Menu key. This decision sets S3 users a bit behind where Google is trying to go with Android – but ultimately it doesn’t matter too much. The Menu key is just as functional as anything else. A Back haptic button is also present, and to access the Recent Apps, you can hold the physical Home button down. Finally, a double tap on the Home button will bring up S-Voice, Samsung’s best imitation of the iPhone’s Siri.

We’ll let you be the judge on whether the Galaxy S3 meets your standards of beauty, but we find the phone to be fairly sleek. It comes in white or blue, with an aluminum bar blended into the sides. Samsung has had some trouble with its blue paint, but the white model is looking good, though nitpicky folk will notice that light bleeds through the white paint on the light up navigation buttons. If this kind of thing bothers you, we suggest opting for the blue design.

Samsung claims that the majority of the shell of the S3 is made of polycarbonate, much like the HTC One X. This is great, but the removable battery cover still has a shiny plastic feel to it and picks up fingerprints quite easily — a classic Samsung trait.

The Samsung Galaxy S3 uses a 4.8-inch 1280 x 720 (720p) Super AMOLED screen. Samsung has been a huge proponent of AMOLED, which is best distinguished from LCD screens, like those on iPhone 4S and HTC One X, by its deep blacks (the pixels can actually shut off entirely) and vivid colors. Some believe that LCD is superior because of its pixel density and ability to display brighter whites, but we’re quite happy with the Galaxy S3 screen. For more information about what screen you might prefer, read our guide to AMOLED and LCD screens.

The Galaxy S III also uses Gorilla Glass, which is almost a prerequisite for any phone these days.

Like the majority of new high-end smartphones, the Galaxy S3 runs Android 4.0 (Ice Cream Sandwich) operating system, Google’s latest. While many of the major enhancements in Android 4.0 remain intact, Samsung has heavily modified the user interface to make the S3 stand out from competing handsets from HTC, Motorola, and others. The Galaxy S3 has a blue, watery look to it, which Samsung claims is inspired by “human emotion” and “nature.” We’re not so sure about either claim, but it mostly works well and many of Samsung’s changes are good.

The only annoying issues we’ve had with the S3 interface relate to customizing your home screens. Despite Google making this process easier, Samsung has thrown up roadblocks in several places. Creating folders is not as intuitive as it is on other Android 4.0 phones like the One X, EVO 4G LTE, LG Optimus 4X HD, or even the Samsung Galaxy Nexus, which runs an unmodified, Google-approved version of Android. On other handsets, simply moving one icon onto another creates a folder, but here, it’s a drawn out process. Moving icons and widgets around is also cumbersome as is deleting apps. Most everything else is fine. Why Samsung made these changes, we may never know.

Some manufacturers like to load up Android with tons of bloatware apps. We’re not seeing much of this on the Galaxy S III. Instead, Samsung has concentrated on a few new types of experiences centered around voice, sharing, and motion. Most of these features are deactivated by default, so you’ll have to dig through the Settings menu to find them.

S-Voice: Samsung’s S-Voice app has been fairly hit and miss. It seems to pick up on your voice fairly well as long as you don’t say anything too complex, but its reactions haven’t been all that impressive. Setting things like calendar dates and alarm clock times is easy and fun, but Samsung has a ways to go before this is as natural as Siri, which isn’t saying a ton, since Siri still needs a lot of work. Still, it’s better than any other Siri competitor we’ve seen yet. Until Google releases “Majel,” or whatever it plans to call its Siri competitor, this may be an Android user’s best option.

Aside from asking questions, we did enjoy being able to yell “snooze” at our alarm or “pause” while music is playing. You can also take a picture by saying “Shoot.” Set functions like these work quite well.

Motion commands: S-Voice is great, but Samsung’s continued advancements in motion are nice as well. Some functions are gimmicky, but the ability to lift up your phone to call the person you’re texting, or turning you phone over to mute sound was pretty helpful and easy to remember. You can also touch your palm to the screen to pause music or mute sounds.

Smart Stay: This isn’t a motion or voice feature, but we really like the Galaxy S3’s attempt to realize if you’re actively looking at the screen or not. If you turn this feature on, the front camera will activate and attempt to figure out if you’re looking at the screen or not. If you are (or it thinks you are), it will automatically keep the screen active. For anyone who likes to read on their phone, this is a cool feature. It doesn’t work perfectly, but anything is better than nothing.

In benchmark tests, the Galaxy S3 seems to match or outperform any other phone we’ve used, scoring slightly above 5,000 in multiple Quadrant tests. For reference, the speedy Samsung Galaxy Tab 7.7 scored between 2,500 and 3,400 on the same test.

Only the iPhone 4S and HTC One X (EVO 4G LTE) might have cameras that can rival the Galaxy S3. The rear camera on the S3 is 8-megapixel and we’re quite happy with it. We’ve included some shots of a recent trip to the Natural History Museum in NYC. Every shot we snapped on the S3 came out better than the Galaxy Nexus, especially in low-light conditions. The S3 also has HDR (High Dynamic Range) which is good for still shots. The S3 often outperformed an older budget point-and-shoot camera, which probably isn’t much of an accomplishment.

Not to let HTC get too far ahead in camera technology, Samsung has also implemented the ability to snap photos while you record video, which is quite welcome, but usually results in blurry photographs. Many other features are also crammed into the app, like facial recognition and sharing, but you likely won’t use many of them. We wouldn’t buy the S3 solely for its camera, but as a secondary function, it more than holds its own.

The Galaxy S3 delivers standard talk quality on each carrier and 4G LTE speeds on AT&T, Sprint, and Verizon. We were only able to test the AT&T’s data speeds, but found them up to par with other handsets we’ve tested.

The Galaxy S3 may have a large 2,150mAh battery, but don’t count on it holding up much better than any of its competition. So far, the battery life of the S III appears to be just a bit better than Samsung’s Galaxy Nexus, but that’s not saying much at all, since battery is one of that phone’s only sore spots. Luckily, the S3 still has a replaceable battery and Samsung has included a “Power saving” feature which will cut the processing speed in half, lower the screen brightness, and turn off haptic feedback to extend battery life. It seems to work a bit, so if you are in a battery crisis, we recommend it. Turning LTE or background tasks off also saves battery life. We are still waiting for another phone to match the Droid Razr Maxx, which still remains the most battery-friendly smartphone.

Compared to One X and EVO 4G LTE

The Samsung Galaxy S3 is the hot phone of the moment. It’s available on more carriers than almost any other phone, and everyone is asking about it. There hasn’t been this much excitement over a device since the iPhone. After using the S3, we think a lot of the hype is warranted. Samsung has delivered a device that meets our expectations in almost every way except in battery life, and surprised us with innovative and quirky new software features. We don’t know what the next iPhone will bring, but it’s good to see an Android phone gain so much momentum. There’s a lot to love about the Galaxy S3.