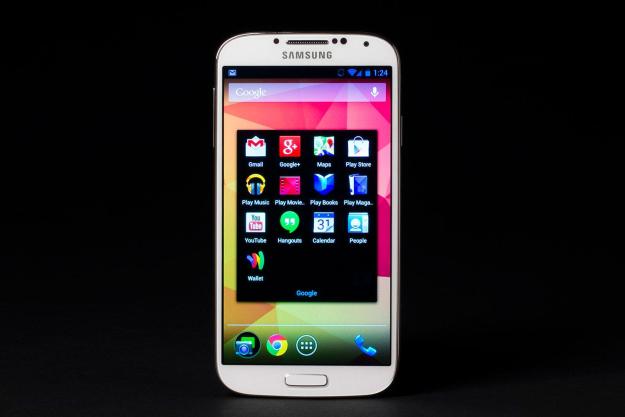 This review contains some material from our original review of the Samsung Galaxy S4.

Instead of giving us a new Nexus device at this year’s Google I/O, the company behind Android instead announced the Google Edition Galaxy S4. It’s the same phone as the not-Google Edition model in every way except one: it runs stock Android Jelly Bean 4.2. There aren’t too many phones than can claim that distinction, and fans of stock Android immediately rejoiced. No more having to root the phone to get rid of TouchWiz and the ten million features that come with it.

Liken the Nexus devices before it, the Google Edition GS4 is available unlocked directly from Google. It’s also expensive at $650 since it’s not subsidized by a specific carrier. The price tag isn’t the only thing that may stop many potential buyers short. Because as joyful as it is to have stock Android on the Galaxy S4, it also means that the smartphone’s signature features are now gone as well. Is the trade-off worth it?

A Galaxy Without TouchWiz

Fans of stock Android will no doubt love seeing the unadulterated version of Jelly Bean running on the Galaxy S4. Samsung’s TouchWiz user interface has many good qualities, but some people just don’t like it and either root the phone to get rid of it or buy something else. Thing is, the Google Edition GS4 doesn’t just get rid of TouchWiz but almost every feature and modification Samsung created for the phone. Apps, settings, widgets: gone. How does this change the experience of using the S4?

On a basic level, it doesn’t. The phone still rocks a speedy processor, lots of RAM, a good display, and a great camera. If anything, the visual elements of Jelly Bean look and feel a little smoother on the Google Edition. And the little things that TouchWiz takes away, like easy folder creation, work once more.

There are a few lingering S4-only enhancements in this version. The physical buttons below the display remain, and the Home button is still multi-functional. Long-pressing it launches Google Now (swiping up from the bottom of the display does not work), double tapping brings up the Recent Apps menu. Samsung’s Flip Cover still works, turning the screen on and off and showing the time and other info through the small window.

Other hallmark features don’t exist in the Google Edition. No Air View, S Beam, Smart Stay, motions/gestures/hands-free interaction, Group Play, S Voice, or power saving mode. We really miss the easy access toggles in the Notification shade. There doesn’t appear to be a way to turn the high screen sensitivity on. The hardware hasn’t changed, so the extra sensors and display technology are still there, they just aren’t all accessible out of the box.

While we’re happy to see the carrier bloatware go away, some of the apps that Samsung created, such as the Music/Video/Reader Hub, Optical Reader, S Health, Story Album, Watch On TV remote, etc., are actually useful. It’s possible to replace most of these apps and replicate many of Samsung’s features with third-party solutions found on the app store. Android is a highly customizable operating system, and that is often easier to do when starting with a blank slate. That’s what the Google Edition represents: a blank slate for owners to build on.

One area where the lack of Samsung enhancements is most evident is the camera. The Google Edition has the same excellent 13-megapixel shooter on the back, it’s just no longer backed up by an app with extensive pro-aspiring features and built-in editing. This isn’t as much of a drawback as it used to be. The stock camera app that comes with this phone and the Google Edition HTC One is far more robust than the stock app on other Android devices. You’ll find HDR, Exposure, White Balance, a few scenes (including Night), a timer, and Panorama. Plus, you get access to Photo Sphere for creating 360-degree panoramas. This is one of the best features of the stock app and one thing we wish we had on the “normal” version of the Galaxy S4.

With smartphone cameras, getting a good picture often comes down to a good app coupled with good hardware. The Google Edition has fewer camera tricks out of the box, but it doesn’t affect the picture quality in Auto mode. We shot the same images with both the Google Edition and the regular GS4 and in Auto mode they look the same. However, once you get into modes that require some processing, the differences start to come out. For instance, Night mode pictures taken with the regular Galaxy S4 are smoother and more color rich than those taken with the Google Edition.

Again, there is no shortage of third-party camera apps you can download to get more robust options and better image processing if you want to push the rear camera further.

This aspect of the phone hasn’t changed. The design language of the Galaxy S4 stays close to that of the S3 because why mess with a good thing? The S4 is just as comfortable to hold, light, and good-looking as the previous generation. The corners aren’t as softly rounded as before and the chrome band that encircles the device is wider and flatter, making the overall design look like the result of an illicit affair between the iPhone 5 and S3. However, the flat edges don’t cut down on the S4′s holdability because the back of the phone still comfortably curves up. The Power and Volume buttons stick out just enough to find without looking, though we wish Samsung didn’t insist on putting them on opposite sides of the phone; it’s so easy to press one when trying to press the other. Plus, with one of the flip covers on (which Samsung sells), the volume buttons are hidden, though not inaccessible.

The Galaxy S4′s polycarbonate plastic body has been derided for being “cheap” when compared to metal-body phones. While it’s true that plastic doesn’t feel as premium, there are advantages to using this material instead of going with a unibody design like the iPhone or HTC One. The big one being access to the battery. Popping the back off allows you to remove the battery and is how you get to the microSD and SIM card slots. Plastic also has the advantage of not weighing much. The S4 is just 4.6 ounces, 0.1 ounces less than the S3. Somehow Samsung has added a bigger screen, kept the overall phone the same size as the S3, and made it slightly lighter. That’s impressive.

The 5-inch display on the Galaxy S4 approaches, but doesn’t exceed, the fragile line between phone and “phablet.” Like the HTC Droid DNA, the S4 still feels like a phone and one-handed use can be accomplished reasonably if you have normal- to large-size hands. The screen itself boasts a 1920 x 1080 pixel resolution and all the bright, popping colors we’ve come to expect from Super AMOLED displays (AMOLED displays extremely dark blacks, which make a big difference when watching media). With wide viewing angles and good sunlight visibility, the screen is one of the S4′s best features.

Put a beautiful, full HD display on a smartphone and people expect to take advantage of it. Thanks to the great colors and wide viewing angles, video watching and gaming is great on the Galaxy S4. The speaker on the back is loud enough for sharing video with a group as well – just don’t expect well-rounded audio quality. The speaker doesn’t face front like those on the HTC One, so setting the S4 on a soft surface muffles the audio. On a hard surface this isn’t a problem since a small bump raises the phone up enough for sound waves to travel. Samsung doesn’t put as much effort into audio as HTC so don’t expect Beats Audio level quality even with headphones plugged in. The S4′s audio is better than the Galaxy Note 2, and with tweaks from a third-party equalizer you can get it to sound even better.

Inside, the Galaxy S4 remains the same: 1.9-GHz quad-core processor, 2GB of RAM, 16GB of memory. The TouchWiz-ified version scored 12,185 on the Quadrant benchmark with this combo, the Google Edition averaged 12,600. That leap is relatively small and may have something to do with the lack of extra features (it also might not). As we said, Jelly Bean runs smooth and speedy here with high frame rates when playing games or just swiping around the interface.

The Google Edition isn’t available with 32GB of internal storage like the regular Galaxy S4, so you may find a need for the microSD slot, which takes cards up to 64GB. The USB 2.0 port is MHL-enabled for HDMI output with the right dongle (Samsung makes one, and there are third-party options).

Wireless connectivity includes Wi-Fi a/b/g/n/ac, Bluetooth 4.0, NFC, GPS (GLONASS), an Infrared blaster, and GroupPlay powered by DLNA technology. The Google Edition Galaxy S4 is unlocked and LTE-ready and will run on GSM networks (in the US that’s AT&T and T-Mobile). We tested the phone on AT&T and saw the same fast download speeds on the Google Edition as on the AT&T version with TouchWiz.

When we first tested the Sprint Galaxy S4, the longevity of the 2,600mAh battery did not impress us. The AT&T version lasted longer and made it possible to get through a day without having to worry as much, though it still required some power saving tricks. If you’re inclined to blame the user interface skin and overstuffed features for this drawback, think again. The Google Edition model didn’t last much longer. We got about an hour extra out of it with heavy use. The combo of full HD display, quad-core processor, and LTE is more to blame than the software. And with the regular GS4 there’s an easy to apply Power Saving mode that’s not available on this model. Still, we like getting extra battery life, even if it’s not much.

The Google Edition Galaxy S4 is a smartphone made for a particular type of Android lover. The kind of person who likes the core operating system and doesn’t want companies messing with the look or the functionality or adding a bunch of apps. This kind of Android fan will do all of that themselves, thank you. For this crowd, this GS4 model offers a great alternative to the Nexus 4. The biggest drawback is price. Unlocked and unsubsidized, this phone costs $649 to own. That price buys you freedom from contracts as well as from TouchWiz.

Just know that you’re also giving up access to many of the Galaxy S4’s best features while still paying for the hardware that makes them possible. That trade-off may not appeal to average consumers. Still, we are glad that Google and Samsung now offer everyone the choice.

Video-editing app LumaFusion to get a Galaxy Tab S8 launch
Apple rolls out iOS 16 update to fix frustrating camera-shake, paste bugs
Apple Watch Ultra review roundup: a truly curious beast
This Google Pixel 7 price leak is bad news for the iPhone 14
Samsung’s new rugged phone and tablet tout 5G and 5 years of updates
Does the iPhone 14 have a 120Hz display?
How to transfer WhatsApp messages from Android to iPhone
Best cheap Fitbit deals for September 2022
The Uber hack is an outrageous tale of a teen hacking for fun
The best Samsung Galaxy S22 screen protectors for 2022
LG’s doomed Rollable phone appears on video to show us what we missed
How to transfer your SIM and phone number to an iPhone 14
Amazon’s new Fire HD 8 tablets run faster, last longer, and start at $100