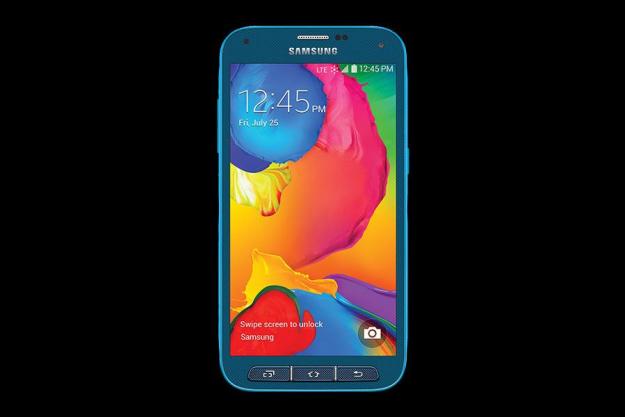 “The Sprint-exclusive Galaxy S5 Sport is colorful and powerful. But with fewer features than the standard Galaxy S5, at a higher price, it’s not a great value. And AT&T’s similar S5 Active is a better option for those who tend to drop their phones.”

With its colorful, waterproof, protective plastic shell, the Samsung Galaxy S5 Sport is yet another ruggedized iteration of Samsung’s flagship Galaxy S5 phone. It has powerful internals and a nice camera, just like the original Galaxy S5, along with pleasingly tactile buttons, just like AT&T’s S5 Active.

But this Sprint-exclusive variant does away with the soft rubber bumpers, making the phone less rugged. And there’s no blue “Active key” for launching the Activity Zone app (or any other app you choose), and no fingerprint sensor, which is found on the original Galaxy S5.

It’s a powerful phone with a good camera. But aside from the tactile buttons, the S5 Sport mostly feels like a Galaxy S5 with a bright built-in case. That’s not a bad thing, but it doesn’t exactly set the phone apart in the same way the S5 Active’s extra features do.

Also, while the S5 Sport isn’t exactly overflowing with pre-installed apps, it does come bundled with a few annoying offenders that can’t be uninstalled. Chief among them is the Lumen Toolbar, an app that populates the bottom of the default browser with ads and app suggestions. We’d find this more acceptable (though still annoying) on a mid-range or budget phone. But on a device that costs just as much as flagship devices (the phone is currently $200 with a two-year contract), the in-your-face adware is grating.

If you like bright colors and textured materials, you’ll likely find the exterior of the S5 Sport appealing. Our review unit arrived sporting an “Electric Blue” shell. And for once, the color name seems quite apt. The phone is also available in “Cherry Red,” although we’d argue that version’s bright red hue is also pretty “electric” as well.

The phone feels good in the hand, thanks to its textured back. But it lacks the rubber-like bumpers of the S5 Active. And as we found out after knocking the phone off a counter and a table a few times, it’s definitely not as fumble-friendly as AT&T’s model. The S5 Sport survived the falls just fine, but a ding on the bottom edge nicked the shiny blue paint job, revealing the black plastic beneath.

Related: Read our full review of the original Galaxy S5

The textured back does, though, seem to lessen the issue we had with the S5 Active, where playing audio at high volume caused the back of the phone to vibrate in a way that made the phone uncomfortable to hold. With the S5 Sport, there’s still some vibration, but it’s not as pronounced. Sound output though, just like the S5 Active, is good but not excellent.

All the buttons on the phone are very tactile, so you should have no problems locating them with a gloved hand. The power button is located about a third of the way down the right side, while the volume rocker is located in a similar spot on the left edge. The tactile Home, Back, and Menu keys below the screen take the most getting used to—especially if you’re an experienced Android user. But after a day or so, we found ourselves liking them, because they let us easily mash the Home or Back button before we even brought the screen up to our eyes.

The textured back side of the phone is removable, though it’s tough to peel off, most likely because the phone is water resistant. The phone also reminds you when booting up (until you dismiss the reminder) to make sure you press the back of the phone down in all areas to make sure the cover is on tightly to keep water out. There’s also a flap covering the USB port on the bottom.

Just like the S5 Active, there’s a 2,800mAh removable battery inside the Sport, as well as a MicroSD card slot for expandable storage, which sits atop the SIM card tray.

Active Zone, but with fewer features

With the AT&T’s S5 Active, you get a hardware button to launch Samsung’s Active Zone app, which displays a bunch of outdoor-friendly features, and lets you take your heart rate via the sensor on the back of the phone.

Aside from the tactile buttons, the S5 Sport mostly feels like a Galaxy S5 with a bright built-in case.

The S5 Sport, however, has no hardware key to launch the app. So you’ll have to launch Active Zone just as you would any other app. The barometer, compass, flashlight, and stopwatch features are still handy. But it’s hard not to wonder why the extra features on the Active have been nixed here, especially given Sprint is selling the phone for the same $200 on contract as the going price for the S5 Active.

As we noted up top, the S5 Sport also ships with the annoying Lumen Toolbar, as well a few other apps, many of which aren’t easily uninstalled. You get Eureka Offers, an app that serves up adds, along with the ability to digitize your store loyalty cards, as well as 1Weather, eBay, Nascar Mobile, NBA Game Time, NextRadio, and a few others.

This isn’t the worst selection of adware and shovelware we’ve seen shipped pre-installed on a phone. But considering the high price and high-end nature of the S5 Sport’s specs, we’d like to see a whole lot less.

Just like the Galaxy S5 and the S5 Active, the S5 Sport packs a quad-core Qualcomm processor running at 2.5GHz, 2GB of RAM, and 16GB of storage (expandable via MicroSD).

Benchmark scores put the S5 Sport slightly ahead of the S5 Active, at 24,774 in Quadrant, and 18,557 in 3D Mark’s Ice Storm Unlimited. That’s powerful, but also par for the course when it comes to high-end phones these days. In use, the phone handled every app and game we threw at it with ease, and never felt sluggish or bogged down at all.

Just like with the standard S5, everything on the phone looks great, thanks to the 5.1-inch 1080p Super AMOLED screen. The screen technology tends to oversaturate colors a little, but the S5 Sport is easier to read in direct sunlight than many other phones, and it’s hard to argue with its very deep blacks.

The S5 Sport also has a 16-megapixel camera sensor, just like the Galaxy S5 and S5 Active, along with support for recording 4K video (at 30fps). You can also technically take photos underwater with the S5 Sport, since the volume rocker works as a shutter button. But just as we said with Sony’s Xperia Z1S, we wouldn’t consider this much of a selling feature, because how often are you do you find yourself in crystal-clear water surrounded by things you want to photograph? If you answered anything other than “hardly ever,” you should probably get a waterproof kit for a DSLR.

On dry land, the S5 Sport takes pretty good photos for a modern high-end smartphone. Low light sensitivity in particular is much better than it was just a year ago with the Galaxy S4. And we like that Samsung has cut down the number of camera modes that come pre-installed in the app, letting users install more if they choose. Having fewer modes to scroll through can make getting capturing a fleeting moment a lot easier and less stressful.

Good battery life, but not stellar

The S5 Sport has a 2,800mAh battery, just like the S5 and the S5 Active. In theory, given the S5 Sport’s identical internals, that should mean you’ll get very comparable battery life. In practice, though, the S5 Sport’s longevity seems shorter.

Everything on the phone looks great, thanks to the 5.1-inch 1080p Super AMOLED screen.

We put the phone through a day of medium-to-heavy use, downloading and installing apps (mostly on Wi-Fi), running benchmarks, taking photos, making a couple calls, and playing through several rounds of Heroes of Dragon Age. After 13 hours, the battery was down to 30 percent. With the S5 Active, we got a few more hours of use before that phone’s battery dipped to a similar level.

The S5 Sport should be able to get most of you through a long day. But if you use your phone a lot and plan to head out for a late dinner or a stop at a bar, you’re probably going to want to bring your charger along.

With its powerful S5 internals, colorful textured shell, and pleasingly tactile buttons, the S5 Sport is a very good phone. But given its price, and the fact that it generally has fewer features than the similar S5 Active or the standard S5, it’s hard to find this phone truly appealing.

Some will be drawn to its colorful red or blue shell. But the plastic exterior doesn’t offer as much drop protection as the S5 Active, so most users would be better off picking up the standard Galaxy S5 (which has a fingerprint scanner and heart rate monitor that this phone lacks) and putting that phone in a good case.

Opting for the original S5 with a case also makes strong financial sense, given current pricing. The S5 Sport, with fewer features and the same internal components as the S5, will run you $200 on contract. The original S5 sells for half that price, or $100 with a two-year agreement. That $100 price difference could buy you a really nice case, with enough left over for a really nice lunch.