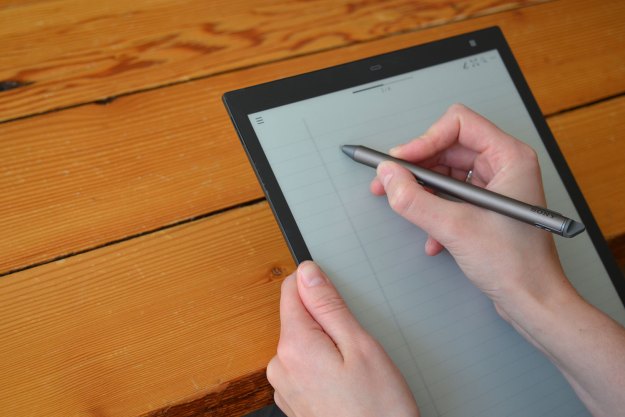 “Digital Paper looks and feels sleek, but transferring files is difficult and not worth the hassle.”

The tablet is an interesting companion when it comes to electronic devices. Depending on your needs, you can find one that’s capable of basically anything — whether it’s watching movies, sketching art, or being used as a full-on laptop. But what about those who don’t need all the bells and whistles? That’s where Sony’s Digital Paper PDF reader comes in.

Following the DPT-S1, the second-generation model DPT-RP1 includes a higher-resolution display, more precise handwritten note-taking capabilities, and the ability to transfer documents wirelessly to a PC or Mac.

As with its predecessor, it’s still specifically meant for those in the legal or professional fields, and anyone pursuing a higher education. If you want to read, edit, or annotate PDF documents, then this might be the ideal device to do it. However, while Digital Paper is easy and comfortable to use, its limited capabilities still come at an extremely high price — this device costs $700.

Thin and lightweight, with a sleek design

Sony’s Digital Paper has an extremely sophisticated look and a nice, smooth feel to it. Coming in at just 0.23 inches thin, it was easy to slip into a tote without taking up too much room. We were also able to place it neatly in our desk drawer when it wasn’t in use — so it definitely won’t be an issue to carry in backpacks or briefcases.

In comparison to other tablets on the market, we were impressed by the 13.3-inch E-Ink screen, which boasts a crisp resolution of 1,650 x 2,200 pixels. It allowed us to view full pages without having to zoom in or scroll up and down. Along the minimal side bezels, there’s a center home button on the top that brings you to a small menu which takes up only about a quarter of the screen. On the side, you can attach your stylus magnetically to the device.

Sony’s Digital Paper has an extremely sophisticated look and a nice, smooth feel to it.

A larger screen also meant we could fill up the page with what felt like a lot more notes, before having to move on to the next one. The high-contrast, glare-free display also made it extremely easy to see and use in the sunlight — although, we’re not sure you’ll have to use it much in the outdoors. Unfortunately, you won’t be able to use it if you’re trying to get work done in darker settings, since there’s no backlight.

Underneath the hood, is a 2.0 GHz CPU and 16GB of internal memory (11GB free out of the box) — allowing you to carry up 10,000 PDF files. That’s a huge upgrade from last year’s 2,800 PDF files. There’s also a built-in lithium-ion rechargeable battery — which we’ll get to later on. On top is where you’ll find the Micro USB charging port and power button, which has an LED indicator for when the device is charging.

It takes about three hours for Digital Paper to charge completely, but even on half a charge it lasted us a few days without completely dying. Normally, it’s supposed to last for up to one week with Wi-Fi use and three weeks without it.

This year’s device comes with a few new helpful features, such as the ability to view two pages at once — which definitely comes in handy when you need to compare notes. We especially liked how easy it was to zoom into text by circling the area, or copy and paste text throughout the document using the same tool.

Unfortunately, you don’t have the ability to search your own handwritten notes. You’ll only be able to search for phrases or words that are part of text from documents like journal articles or contracts. But if you’re using the device to take a majority of your notes, it’d be nice to be able to quickly search words in your own handwriting to refer back to when you need it.

Digital Paper weighs 12.3 ounces — but that’s without the Digital Paper Cover which adds about 7.05 ounces. When going cover-less, the device is lighter than the iPad Pro 10.5 (16.4 ounces) and almost the exact same weight as the ReMarkable tablet (12.32 ounces).

We preferred not using the case since it made it much heavier, and it wasn’t as easy to hold with one hand. If you’d rather have the extra protection, it thankfully doesn’t make the device much thicker and comes with a stylus holder. But we also didn’t like that the case attaches to the device with an adhesive strip as opposed to magnets. While it hasn’t lost its stickiness, it’s not as easy to remove and you might find yourself having to aggressively pull on it.

Aesthetically, the Digital Paper Stylus looks as sleek as the device, and at only 0.56 ounces, it definitely feels light. At the top, you’ll find another Micro USB charging port.

One minor issue we had, was how easily accessible the eraser was to our grip. The Apple Pencil and the stylus that comes with the ReMarkable tablet are buttonless and smooth. The Digital Paper stylus, on the other hand, comes with a button on the side that seems convenient in theory — pressing down on it will automatically enable the eraser, eliminating the extra step of having to tap on another setting to undo what you’ve written. The same button can also be used to highlight specific words.

But sometimes when we were writing quickly, we found ourselves accidentally pressing down on the button long enough to erase what we’d already written. Again, its a super minor issue but those who tend to have a strong grip on pencils or pens might find themselves in the same predicament.

Digital Paper would definitely be worth considering if it were cheaper.

We loved that, in comparison to the ReMarkable tablet and the iPad, it actually feels like you’re writing on paper. There was only a slight latency in the E-Ink but after using it for quite some time, you no longer notice it. It also comes with four different tips to choose from — two felt tips if you want to mimic the pencil experience, and two plastic tips for a pen instead.

To help make note-taking and annotating easier, you’re able to choose between blue and red, along with five different thickness levels. The same goes for the eraser size. But if you choose to use red, it’ll show up as a faded color on the display and will only show up in red when you upload it to your computer.

The battery on the pen was also impressive — Sony says that it can last up to one month on a full charge and we haven’t had to charge it yet after using it for one full week.

The software is easy to use, but isn’t ideal. In order to sync your files to your desktop, you have to install Sony’s Digital Paper app onto your computer. You can either use the USB cable, Wi-Fi, or Bluetooth, to upload the your files. But even if you do it wirelessly, you still have to initially go through the process of connecting the device up to a Wi-Fi network via USB on your computer — which wasn’t as seamless as we’d hoped.

Once you do connect it to a known Wi-Fi network, then it’ll continue to recognize it and you won’t have to plug it into your computer each time you want to perform a sync or transfer files. But if you’re constantly switching locations, then you’ll have to set it up via USB again or you can always pair it using Bluetooth.

While you can share the documents to other third-party cloud services such as Dropbox, Box, and Google Docs, it’s not integrated into the actual device, so you can’t send them directly. Even though it’s easy to simply upload the documents and access them on your desktop, we felt it’d be easier if there was a mobile app. That way, you’d be able to upload all of your documents easily to your phone without having to carry around a laptop if you need to transfer and send documents you’ve written or signed. You’re also limited to only being able to upload PDFs.

Not worth the hefty price tag

Digital Paper would definitely be worth considering if it were cheaper. We did enjoy using the device because it was simple to use, easy to carry around, and allowed us to keep track of notes in an organized manner. More importantly, the feel of it truly mimicked writing on paper with a pen or pencil. It also has an aesthetically pleasing look to it. But for $700, we hoped that it would allow us to be far more productive and offer better app integration in order to be able to effortlessly send and upload our documents.

For those who do still very much rely on physical paper — as in, 10,000 PDF documents worth — then it might be worth investing this much money. Otherwise, stick to those notebooks instead.

Sony’s Digital Paper will cost you $700, which is pricey compared to other e-readers or tablets. For this price, you’re only getting the most basic features, so you might be better off investing that much money in a device that will allow you to do far more.

Sony’s Digital Paper looks and feels sleek, and we love that it was so simple to use. But its restricted use case and difficulty when it comes to sharing files from one device to another makes us feel like it isn’t worth the hassle.

If you want a similar pencil to paper experience, the ReMarkable tablet is not only $100 cheaper but has a companion app for iOS, Android, and PC, allowing you to easily sync files when connected to Wi-Fi. It also includes more templates such as sheet music and weekly schedules. Sony’s Digital Paper only provides basic pre-loaded options such as legal paper, blank paper, and grid paper. But if you want to add more, you can always upload templates to the device as well.

You can also opt for Apple’s 64GB iPad Pro 10.5, which will give you far more features for the same price as Digital Paper. While you do have to factor in the cost of the Apple Pencil, you’re essentially getting your money’s worth with the ability to take notes, draw, and sync all of your important files without the hassle.

Sony’s Digital Paper should last you for a couple of years. Since it can hold up to 10,000 PDF files, you’ll definitely have enough space to carry all of your notes. Since it comes with replacement tips for the stylus, you don’t have to worry about purchasing new ones any time soon if the one you’re using becomes dull. Sony will also provide software updates for Digital Paper and the Digital Paper app.

No. Sony’s Digital Paper isn’t as functional as the competition, and it does not allow you to easily access your content through a mobile device. Do buy it if you’re the type of person who works strictly in PDF format and don’t need to quickly sync your files wirelessly to your smartphone.