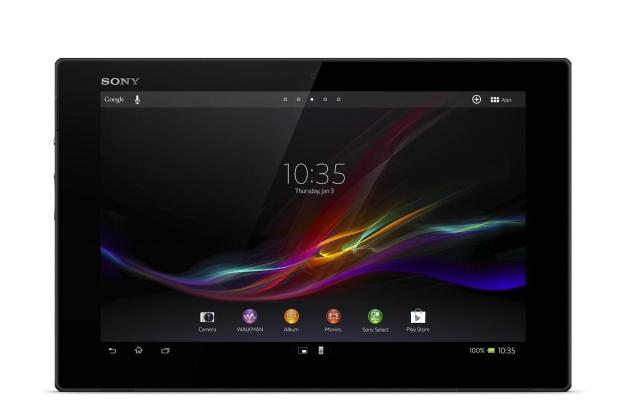 “The Xperia Tablet Z is so thin and light people will literally say ‘wow,’ and despite occasional lag and a needed Android 4.2 update, it’s one of the best tablets available.”

Sony has been in the tablet game for two years, and it hasn’t had a lot of success. The first Xperia Tablet was, well, strange and pie-shaped, and it’s sequel last year had so many hardware issues that it was recalled. But as the saying goes, third time is a charm. Like it’s Xperia Z phone, the Xperia Tablet Z offers a completely new look and feel for a Sony device, and we couldn’t be more excited.

Priced to take on the iPad

Before we get into the specifics of the Xperia Tablet Z, know that Sony has priced it at $500. This puts it at the same price as an entry-level iPad 5 and at the upper price tier for most Android tablets, which have been decreasing in price to appear as a bargain compared to the iPad. We believe the primary choice most of you will make is between this (or a similar tablet) and the 9.7-inch iPad. The Nexus 10 is its nearest Android competitor for $400. The Microsoft Surface RT also starts at $500, but actually costs another $100 if you want a keyboard cover (and you do).

The Xperia Tablet Z is a ‘wow’ device. When you put it in someone’s hands, they immediately smile and say, “wow, it’s so light.” After that, they comment on how thin it is (6.9mm). This happened with all of us in the office and everyone we handed it to. It’s a near-perfect example of what a 10-inch tablet should look and feel like and it makes the iPad feel heavy and fat.

When you put it in someone’s hands, they immediately say, ‘wow.’

Though it’s boxy by design, the thinness works to Sony’s advantage with comfort. It’s extremely comfortable to hold the Tablet Z almost any way, and with rounded edges and a grippy, rubberized back, it never feels like it’s digging into your palms or ready to fall out of your hands like an iPad does. The frame and shell is made from plastic reinforced by carbon fiber.

With an easy-to-find (it’s bright silver) Power button and Volume rocker on the left, it’s easy to turn on and operate as well. The ‘wow’ factor continues once it’s turned on with a 1080p screen that pretty much matches Apple’s ‘Retina’ screens and looks fantastic at most angles. (It’s TFT, and does have a little discoloration at extreme angles, but nothing a non-reviewer would complain about.)

The speakers on the Tablet Z do not match the intensity and clarity of the iPad 3 or 4, but compete well with other Android tablets. Sony has included a few sound filters as well, though we weren’t fond of most of them. Like all tablets, you’re going to need external speakers or headphones to make the most out of sound. We found it loud enough to comfortably watch Netflix in bed and listen to Spotify in the kitchen. What else can you ask for?

Finally, the Tablet Z has a secret mutant power. Like the Xperia Z, it is water and dust resistant, meaning you can submerge it in your bathtub (or accidentally drop it in the pool) for up to 30 minutes.

We love the design and feel of the Tablet Z, but when you turn it on, it does still run Android. And, sadly, that does come with some issues and limitations, when compared to iOS on the iPad.

Sony has done a commendable job customizing the user interface of Android 4.1 Jelly Bean. It looks a little smoother than Google’s default version, and it has a fairly consistent style across the board. We even like the improved keyboard, which doesn’t add functionality but somehow feels more comfortable than Google’s drab QWERTY.

The downside here is that Sony hasn’t upgraded the Tablet Z to Android 4.2. Though it didn’t add much functionality, Android 4.2 did majorly update Android’s tablet interface to feel and act almost exactly like it does on phones (just bigger). Eliminating the clumsy clock menu on the lower right and adding pull down notification menus was a great decision that we applauded when we reviewed the Nexus 10. The update would add an iPad-like home-row of app icons as well.

Sony’s exclusive apps are pretty good, but only if you’re willing to enter an all-Sony media environment. There’s a Sony Reader e-books app, Music Unlimited, Video Unlimited, and a number of other apps. We also like the TV remote app that lets you connect up to any TV, making the tablet a good universal remote.

Speedy for an Android tablet, but still a little clunky

Want to know what $500 will get you these days? The Tablet Z has a 10.1-inch TFT LCD screen with a resolution of 1920 x 1200 pixels, 2GB of RAM, a 1.5GHz quad-core Qualcomm Snapdragon S4 Pro processor (APQ8064+MDM9215M), 16GB of internal storage (with microSD slot if you need more), an 8.1-megapixel rear camera, and a 2.2-megapixel webcam. We also like the addition of Infrared for TV remote controlling, HDMI via MHL support, NFC, Bluetooth 4.1, an audio jack, Micro USB charging, DLNA support, GPS, and your typical array of sensors and gyros. Our unit connected to the net via Wi-Fi.

We experienced some sluggishness when trying to multitask quickly.

Unfortunately, though these specs sound great on paper, and the tablet’s Quadrant score was good (7,640, which is higher than the 4,500 the Nexus 10 got, but lower than the 12,000 we get with the Galaxy S4), we experienced some sluggishness when trying to multitask quickly, switch home screens fast, or even flip through Flipboard pages at an advanced rate. On paper, the Xperia Tablet Z is one of the most powerful tablets on the market, but for some reason it sometimes feels sluggish compared to the weaker iPad and even the Nexus 10. It’s not as bad as older Android tablets, but using the Tablet Z does somewhat end the ‘wow’ attitude that people have when they first hold it. An upgrade to Android 4.2 may fix this. Hopefully Sony is already working on it.

Don’t let the numbers on the camera fool you. 8.1-megapixels isn’t enough to make the rear camera on the Tablet Z worthwhile. Like almost all tablets (the iPad being somewhat of an exception), the Z’s rear camera is slow and, well, lame. Our low light shots came out very grainy. Outdoor shots were all right, but still didn’t impress on detail. The shutter speed could be improved, greatly. Rear camera performance is almost a non-issue though, in our opinions. If you’re buying your next tablet for its camera prowess, you may want to get your head out of the clouds.

I have no battery life awards to give to the Tablet Z. It has a modest 6,000mAh lithium polymer battery inside it and promises about 10 hours of video playback or 8 hours of Wi-Fi Web browsing. Using it, we didn’t have a problem with it running out of juice too fast, despite the fact that the iPad 4 has an 11,560mAh battery and the Nexus 10 clocks in at 9,000mAh. Both of these tablets do have higher resolution screens, which likely suck up more juice. If battery becomes an issue, Sony has included ‘Stamina’ mode, which lets you shut all, or some, apps off whenever the tablet is idling. The flexibility is nice.

The Sony Xperia Tablet Z is the most impressive Android tablet we’ve ever held and a strong competitor to the Nexus 10, Surface RT, and iPad 4. It’s as light and thin as we’ve hoped tablets could be, but doesn’t sacrifice battery life or power. And did we mention that it’s waterproof? The only downside is the interface, which hasn’t gotten an Android 4.2 makeover yet, and remains somewhat complicated. An update could fix this, and we hope Sony is planning one, because the overall performance is still a little clunky here and there, despite a powerful processor and specs.

For $500, it’s $100 more than the Nexus 10 and we’re not so sure the elegant design will be worth a 25 percent price increase. And, as much as we want to see a tablet outperform the iPad, this isn’t the one. Android’s tablet apps aren’t plentiful enough yet and Apple’s tablet is still easier to use and, frankly, faster. Having said all that, the Sony Xperia Tablet Z is one of the best Android tablets we’ve ever used, and would be a great choice for anyone looking to buy an Android tablet.

Topics
Video-editing app LumaFusion to get a Galaxy Tab S8 launch
The best smartphone stocking stuffers for the 2022 holidays
When is my phone getting Android 13? Google, Samsung, OnePlus, and more
Best Black Friday iPad Deals: iPad Air, iPad Mini, iPad Pro
The best Android phones in 2022: Samsung, Google, and more
This Amazfit fitness tracker is $35 for Cyber Monday, and it’s selling fast
This 10-inch Lenovo tablet is $129 for Cyber Monday (selling fast)
Save $200 on the Samsung Galaxy Tab S7+ with S Pen for Cyber Monday
Don’t buy the wrong iPad during Cyber Monday — get this one instead
Samsung’s Galaxy Buds earbuds line is discounted for Cyber Monday
Audible Cyber Monday deal drops the price of Premium by 60%
This is your last chance to get 3 months of Kindle Unlimited for just $1
My favorite iPhone MagSafe in-car holders are Cyber Monday bargains