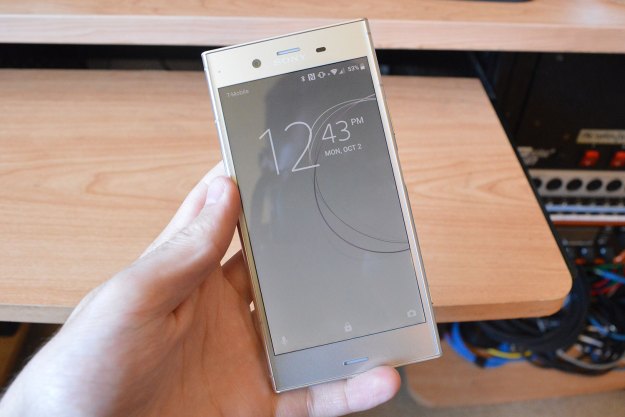 The Xperia XZ1 is similar to Sony’s earlier 2017 flagship, the Xperia XZ Premium. It has the same, excellent camera that can shoot super slow motion videos at an impressive 960 frames per second. It has almost everything you’d want in a smartphone, and in our review, we see if it’s worth your money among the intense competition.

It’s been some time since a Sony phone was hailed for design, and it will likely stay like that until 2018. Sony has been reusing the same design theme for the past four years, and nothing’s different with the Xperia XZ1.

The smartphone trend of the year is the “bezel-less” design. It’s where the edges flanking the screen are as small as possible for a truly immersive experience, such as the Galaxy Note 8, the LG V30, and the iPhone X. You end up getting a larger screen, in a smaller frame. You won’t find an edge-to-edge display here, as Sony is sticking with a somewhat large forehead and chin on this device — the result looks dated.

Like other Sony phones, the XZ1 sports a sharp rectangular design. It’s different from other phones on the market that opt for rounded corners and an overall softer look. The back is incredibly minimal, which we like. The camera sits on the top left corner with a slight bump, and the Xperia logo is in the middle.

The left edge of the phone is where you’ll find the SIM and MicroSD card slot, which is a little finicky. Ours eventually broke on the Xperia XZ Premium, so we imagine the one on the XZ1 will be just as fragile. The good thing is you don’t need a SIM card removal tool — just a long fingernail that can dig in.

Sony has been reusing the same design theme for the past four years.

On the right is the power button, volume rocker, and a camera button. We always like to see dedicated shutter buttons, and wish more manufacturers added them in. On the XZ1, you can immediately launch the camera by pressing the button and use it to capture photos and videos. The power button is indented — it doesn’t stick out like traditional buttons. On the top, you might be pleased to know there’s a headphone jack.

We do like the XZ1’s design — the back is minimal and attractive, but the front looks dated due to the chunky edges around the screen. If you’re looking for something new in Sony design, wait until next year. The company confirmed we can expect to see a visual refresh in 2018, and hopefully it includes a fingerprint sensor.

You’ll hardly have any issues with the Sony Xperia XZ1’s performance. It’s responsive and snappy, apps load quickly, and we didn’t have problems when multitasking. It was able to handle graphic-intensive games, like Asphalt 8, extremely well, and the only stutter we saw was when it tried to load an ad in the game’s menu.

The smooth performance is all thanks to the Qualcomm Snapdragon 835 processor, which is the same chip you’ll find powering most Android handsets of 2017, including the Galaxy S8 Plus, and the Pixel 2.

Let’s take a look at those Benchmark scores:

These benchmark scores are quite good, as the XZ1 managed to beat out other high-end phones like the Samsung Galaxy S8, which scored 155,253 in its AnTuTu test. Naturally, it didn’t come close to the iPhone 8, which scored a massive 214,492 on AnTuTu. Benchmarks aren’t the be-all end-all of performance though, so don’t rely on it too much.

You’ll find 4GB of RAM, which helps with multitasking, and 64GB of internal storage should be plenty for most people. The MicroSD card slot means you can expand that storage up to 256GB if you need more space.

A good display, and daylong battery

At 5.2-inches, the Xperia XZ1 is smaller than your average flagship smartphone, and its size means you definitely don’t need a super high resolution like the Note 8’s 2960 x 1440-pixels. Instead the XZ1 has a Full HD (1,920 x 1,080) pixel resolution. The LCD screen is sharp and bright, but colors aren’t as vibrant and the blacks aren’t as deep as the AMOLED screen on our Google Pixel XL.

The 2,700mAh battery is small, but the phone managed to last a day in our tests. You’ll want to make sure that you charge the phone daily, but at least there’s support for Qualcomm’s Quick Charge 3.0 — that means you can get quite a bit of juice after a short charging time.

The camera to end all cameras? Not quite

One of the main selling points of the Xperia XZ1 is its camera. The rear camera packs 19 megapixels and a f/2.0 aperture, electronic image stabilization, and predictive phase detection and laser autofocus. The spotlight is on videos over photos, because the killer feature is the ability to capture slow motion videos at 960 frames per second at 720p. That means you can slow down incredibly high-speed movement. Apple’s iPhone 8 Plus can do slow-motion video of 240fps at 1,080p, which isn’t as slow as the XZ1.

It’s a fun feature, but it can be pretty tricky to use.To use super slow-mo, you’ll first start recording video, then you’ll hit the “super slo-mo” button at the exact moment that you want, after which it’ll start filming at 960 frames per second. The camera only takes slow-motion footage for a few seconds, which means you have to time it all perfectly or you’ll miss the action. It works best in bright daylight, which can be a little limiting, and we would have liked to see a 1,080p resolution — maybe next year.

When it comes to taking photos, we compared the XZ1 closely to the Google Pixel as we had it on hand.  Images weren’t as sharp as those taken by the Pixel, and colors weren’t as saturated — to be fair, the Pixel tends to oversaturate images. We had quite a bit of trouble with the XZ1’s focus: The Pixel was able to latch onto objects and people quickly and easily, but the XZ1 kept shifting focus. The camera’s results are best with landscape shots, which are well detailed with accurate colors.

In low light, the Xperia XZ1 largely could not produce many usable photos.

In low light, the Xperia XZ1 largely could not produce many usable photos. You may be able to achieve better results using the camera’s manual mode and tweak settings, but we were a little disappointed with the results from the automatic mode.

There are some other nifty features in the camera, such as “predictive phase detection autofocus.” It keeps the focus on a moving object and takes a burst of photos. For example, if you wanted to take photos of the front of a train pulling into a station, the XZ1 can keep the focus on the front of the train as it moves closer and closer. This worked pretty well, and while one or two photos were still blurry, we were always able to find great shots within the cluster.

The Sony Xperia XZ1 is built around offering a great camera experience, but so far its best attributes aren’t exactly necessary. We like the object tracking focus and the super slow motion, but an overall improved photography-experience would have been preferred.

The Sony Xperia XZ1 is one of the first devices to ship with Google’s latest and greatest operating system, Android 8.0 Oreo, but Sony has tweaked it heavily for a custom experience.

It’s not a bad-looking theme, but we definitely could have done without the pre-installed apps – and there are plenty of them. From Google-replacement apps, like “Album,” and “News,” to other apps like the PlayStation app, the bloatware is serious on this phone. These extra apps sit next to Google’s ones, so you’re sometimes stuck with two of the same app.

What makes the XZ1 unique is 3D Creator, which allows you to create 3D scans of faces, food, and so on. You can have these scans printed if you own a 3D printer, and if you don’t you can send them to a third-party service straight from the app itself. We found the 3D scanner to be a little tricky to use, and you’ll want both a steady hand and a steady model – but in the end it can produce some cool effects. We like it, but we don’t think it’s going to be popular or widely-used. It’s rather niche.

In general, the software works fine and was responsive, though a little cluttered. If you’re looking for a pure, simple Android experience, look to an HTC, Google, or Motorola phone.

Sony offers a one year limited warranty on the Xperia XZ1, which covers failure under normal use and factory defects. It’s important to note that it does not cover standard phone wear and tear or cases of user errors – including accidental damage or dropping your phone in the pool. The phone does offer an IP68 rating – which should allow it to withstand up to 1.5 meters of water for up to 30 minutes.

The Xperia XZ1 is available now on Amazon, but you should know it is only supported on GSM networks such as T-Mobile and AT&T. It does not work on Verizon and Sprint. It costs $700, though it’s already discounted to $650 for some colors.

It can be easy to forget about Sony in the smartphone world. While players like Apple, Samsung, and more recently Google, but you should know it is only supported on GSM networks such as T-Mobile and AT&T. It does not work on Verizon and Sprint. It costs $700, though it’s already discounted to $650 for some colors.

The Sony Xperia XZ1 is a good phone. It offers excellent performance and ships with the latest Android 8.0 Oreo. While some of its camera features are little gimmicky, we did enjoy playing around with them, especially the Super Slo-mo. For the price, we expect the camera to be better for photography, and the dated design, lack of a fingerprint sensor, and bloatware and unnecessary blights.

If you’re a Sony phone enthusiast, we recommend waiting until next year. The company said it will introduce a refreshed design ethos for 2018, and we’re optimistic it’ll pull out something interesting.

Yes, there is. The Samsung Galaxy S8 offers a modern design, excellent camera, and beautiful display. It also keeps the great performance offered by the Xperia XZ1 thanks to the Qualcomm Snapdragon 835, and it’s slightly cheaper on Amazon right now at $625.

You can even go for a the first-generation Google Pixel, which is now $550 on the Google Store, or the HTC U11.

The phone performs well, so its performance should hold for at least the next two years. The IP68 water- and dust-resistance rating gives added durability, and there’s no glass on the back so there’s less of a chance to break the phone. We expect two to three years of use here, more if you take care of the phone.

Yes. You get good performance, a capable camera with fun features, daylong battery life, and a good display. It’s a little too expensive for what it offers though, and there’s easily better competition. Buy it if you really love taking slow motion videos.

Topics
Video-editing app LumaFusion to get a Galaxy Tab S8 launch
Best Phone Deals: Save on Google Pixel 6a, Galaxy S22 Ultra
Why the lawsuit against Apple’s AirTags may be bigger than you realize
Apple Music Sing brings karaoke singalongs to iPhones, Apple TV
Google Pixel 7a: release date, price, specs, and all other rumors
Best over-the-counter hearing aids for 2022
Save $70 on the Fitbit Versa 4 when you buy it today
My favorite phone of 2022 didn’t come out this year — it’s from 2021
Twitter’s downfall made me look for alternatives, but they just made it worse
How to buy over-the-counter hearing aids
Don’t miss this Apple Watch Ultra deal
Apple to use made-in-America chips for iPhones and Macs
How to use the free VPN on your Google Pixel 7 (and why you should)