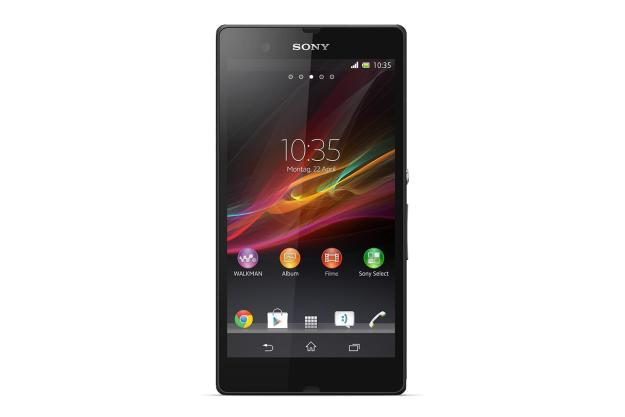 “The Xperia Z is as good as any top phone on T-Mobile, but it’s water and dust proof case sets it apart from the crowd.”

Sony is making a comeback, and it’s about time. Though it has some of the most valuable brands in the world – Walkman, PlayStation, etc – Sony has been a bit player in the phone race here in the United States. Xperia phones are usually great, in many ways, but have a downside or two. They just haven’t stood out – until now. Like the Xperia Tablet Z, the Xperia Z stands out, and thanks to a new partnership with T-Mobile, anyone can buy it for $100 down. Is it worth your cash?

Let’s face it: most smartphones look the same these days. They’re boxes with pretty touchscreens. Sony isn’t reinventing the wheel with the Xperia Z, but has made one sexy wheel. The Z is one of the best-looking phones on the market. Entirely black, durable glass (not Gorilla Glass, but similar, we’re told) covers every surface of the Z, with rounded polycarbonate corners and edges. Design-wise, Sony has stepped up.

Sony isn’t reinventing the wheel with the Xperia Z, but has made one sexy wheel.

Though it doesn’t have the ‘wow’ factor of the Tablet Z, the Z phone has all of its stylings and class. Aside from the waterproof design (we’ll get to that shortly), the Z has a prominent, round, brushed metal power button. In a briefing, Sony executives explained how important the placement and feel of the power button is on a smartphone with a 5-inch screen, but they were preaching to the choir. The Z’s power button is easy to press and is placed in the perfect spot, a little above halfway up the right side of the phone. It seems silly, but being able to press every button on the phone – power, volume, Back, Home, Recent Apps – without shuffling the phone in your hand makes it easier to use it with one hand. Most smartphones these days are large enough that many people have to adjust their grip constantly to get at different buttons, often leading to drops and uncomfort.

Since it does have a boxy feel, the Z isn’t the most comfortable phone to hold, but you get used to it quickly. The only major negative we’ve had is the amount of fingerprints that collect on every face of the phone. Having a shiny black glass design sets the Z apart, but like the Nexus 4, Optimus G, and iPhone 4, having glass all over the place has downsides.

You may not know it from looking at the phone, but there are a ton of ports and slots all over it. They’re just hidden by waterproof plugs. Pop them all open and the Xperia Z looks like a frightened R2D2.

Plug them all in though, and you have a phone that you can take in the shower, drop in the toilet (that’s a thing, apparently), or take in the pool. Sony claims that the Xperia Z can stay in up to 1 meter of water for up to 30 minutes.

We cannot express how awesome it is to have a phone that is 100 percent water resistant. You no longer have to worry about whipping it out in the rain. Since it’s dustproof too, you can get junk on it and just wipe it off. Smartphones are so delicate. It’s nice to have one thing less to worry about. Now, if you happen to be on a dock and your buddies push you off, you won’t have a broken phone when you get out.

Sony still hasn’t updated the Xperia Z to Android 4.2, but unlike the Tablet Z, phones don’t see as huge a benefit from the 4.2 upgrade. Hopefully it’s coming soon, but what’s here is a great phone.

With the Xperia Z, Sony strikes a delicate balance between changing the look and feel of Google’s Android operating system to make it feel “Sony,” but doing so without screwing everything up. There are some Sony apps, and the whole interface has a slick modern look to it, but it’s still easy to use and find important settings and features. We like Sony’s revamped Recent apps menu, which has an added panel that lets you open tiny “small apps” that run in little windows. Need a calculator? You can use one on top of whatever app or webpage you’re looking at. It’s handy.

Since this is a T-Mobile phone, there are a few T-Mobile apps installed. One of them will allow you to see your minutes, messages, and data used each month, all inside the pull-down Notification bar. We found it to be a helpful, but ugly screen. Thankfully, it’s possible to turn it off. There isn’t a massive amount of bloatware (mostly a few T-Mobile and Sony apps).

Overall, using the Xperia Z is pleasant. Sony has really improved its user interfaces this year.

The Xperia Z is a top-tier Android phone. It can compete head-to-head with Samsung’s Galaxy S4, the iPhone 5, or the HTC One. It will lose to most of them in a direct processor face-off, but not by any amount that will matter to a normal person (it certainly didn’t to us). In the Quadrant benchmark test, it scores about an 8,000. This is lower than the 12,000 average of the One and S4, but we have not noticed any actual difference in speed using them. Theoretically, if you had some super powerful game, it would run better on the S4, but in almost any realistic circumstance, a score of 8,000 is highly impressive.

Using the Xperia Z is pleasant. Sony has really improved its user interfaces

Helping it reach that score is a 1.5GHz quad-core Qualcomm Snapdragon S4 Pro processor and 2GB of RAM. You’ll also get 16GB of internal file storage (with microSD slot), a 5-inch 1080 x 1920 pixel TFT LCD screen (gets a little dimmer than some screens on extreme angles), a 13.1-megapixel rear camera, a 2.2-megapixel front camera, NFC (you can ‘bump’ the Z to other Sony products to auto connect), DLNA, MHL, Bluetooth 4.0, accelerometers, GPS, and all that jazz.

The Z can connect to T-Mobile’s new 4G LTE network or its robust HSPA+ 3G network. We’ve experienced normal speeds on T-Mobile’s networks. Similarly, talk performance on the Z is good. We had no trouble hearing or being heard in a one-on-one call or a conference with multiple participants.

Camera has a “Superior Auto” mode

We don’t think Sony’s camera matches the iPhone 5, but it gets the job done as well as most high-end phones these days. We’ve noticed some extreme color correcting sometimes (the grass in our yard doesn’t look THIS bright) and a lot of artifacting in the dark, but shots have turned out pretty well, otherwise. A new “Superior Auto” mode assesses what you’re trying to photograph and will turn on special modes automatically, like night, macro, document, etc. It does a pretty good job, and the mode is easier to use than on Samsung’s recent camera phones.

When recording video, the image looked decent, but the phone picked up a good amount of background noise.

Battery life sucks, but there’s an app for that

Sony nailed a lot of things, but the 2330mAh battery in the Xperia Z hasn’t impressed us so far. It’s a larger battery than some phones, but the Z dies pretty quickly. Even on standby, it will drain out relatively quick. Thankfully, there is a Power Management app that lets you turn off background tasks and see precisely how long your battery is going to last you on standby. By turning on “Stamina” mode and choosing to only let a few apps access data in the background, we increased our standby battery life from 6 hours to 1 day and 14 hours with 35 percent battery life.

On the whole, the Z’s battery situation isn’t great, but it’s also not uncommon. It’s good that Sony has included some battery saving techniques. You should be able to attain standard performance on the Z.

The Xperia Z is a great phone and one of the best options on T-Mobile. Though T-Mobile users have a lot of other choices – the Nexus 4, Galaxy S4, HTC One, BlackBerry Z10, Galaxy Note 2, and iPhone 5 – the Xperia Z is the only device that is dust and water proof. If water damage is something you fear, you may want to choose the Z. Luckily, you don’t have to trade performance for water resistance. The Xperia Z is a beauty, but it’s also one tough phone.