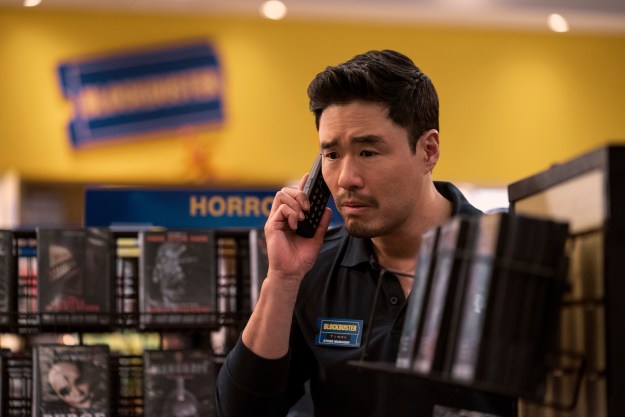 “Blockbuster is a well-meaning but ultimately lackluster attempt to pay homage to a bygone era.”

There’s something undeniably dystopian about Blockbuster. The new comedy series from creator Vanessa Ramos takes place in a fictional version of the last Blockbuster video store on Earth, and it follows the lives of the store’s workers as they struggle to keep it open at a time when streaming services have destroyed most consumers’ interest in renting physical copies of movies, TV shows, and games. As far as sitcom premises go, Blockbuster’s isn’t half-bad. In fact, the series would, under most circumstances, open the door for viewers to revisit the validity and purpose of physical video stores.

The only problem is that Blockbuster is a Netflix original series, which means that it’s essentially a TV show about a once-popular business distributed by the very company that destroyed it. The series, consequently, feels like an oddly unwarranted, half-hearted victory lap from a company that certainly isn’t in need of any more. Despite the few highs that Blockbuster hits across its first season, the series is never able to escape the dystopian feeling evoked by the contradictory nature of its own existence.

It doesn’t help that Blockbuster’s 10-episode debut season doesn’t have much to offer in terms of laughs or originality, either. The series’ premiere installment is only sporadically funny and relies heavily on numerous film and TV references, as well as several outlandish gags, rather than the chemistry and charisma of Blockbuster’s stars, Randall Park and Melissa Fumero. The moments in which the episode mourns the loss of the video store and makes its case for why such businesses shouldn’t go extinct are also, inevitably, undercut by Blockbuster’s placement on Netflix.

The same goes for the series’ various jabs at the kind of algorithm-based film and TV recommendation software that Netflix itself has made popular. While the points that Blockbuster makes about the enduring quality of in-person recommendations are certainly valid, it’s impossible to take them seriously coming from a show that is so clearly indebted to the very systems and corporations it’s trying to criticize. The series doesn’t do much to replicate or submerge viewers in the world and atmosphere of its titular store, either, and it comes across as even visually flatter than most Netflix originals.

Blockbuster’s first season is also, in typical sitcom fashion, hampered by several characters, gags, and running jokes that don’t entirely work. That’s especially true for the character of Percy (J. B. Smoove), the owner of a party supply store and the landlord of the show’s central strip mall. His friendship with Timmy Yoon (Park), the owner of Blockbuster’s titular video store, never feels fleshed out or developed enough, and Percy causes far too many problems throughout the show’s first 10 episodes for viewers to become at all invested in him.

Around the midpoint of its first season, Blockbuster does even out a bit and begin to settle into a fairly smooth groove. That’s largely due to the decreased reliance in the show’s middle episodes on superfluous gags, which allows Blockbuster to rely more on the star power of Park and Fumero, who plays Timmy’s second-in-command and primary love interest. When they’re given enough room to breathe and work their magic, both Park and Fumero are capable of creating the kind of heart and energy on-screen that Blockbuster desperately needs in order to work.

Outside of its two stars, Olga Merediz turns in a charmingly eccentric performance as Connie Serrano, the oldest employee at Timmy’s Blockbuster store. Like many of the figures in Blockbuster, the show’s characterization of Connie grows sharper and more precise the further into its first season that it gets, and Merediz earns some genuine laughs whenever she fully leans into her character’s quirkier sensibilities and habits. The same goes for Kamaia Fairburn, whose underutilized character, Kayla, could stand to take on a more prominent role should Blockbuster return with more episodes.

Ultimately, Blockbuster’s first season suffers from many of the same issues that have plagued sitcoms of the past. Thanks to the talent of the show’s cast, there’s no reason to believe that Blockbuster couldn’t bounce back with a stronger sophomore season at some point. An increased focus on its leads and a decreased desire to take them out of the show’s central store could, for instance, do a lot to help Blockbuster find its way toward a more solid footing. As it currently stands, though, Blockbuster is an uneven, only occasionally entertaining sitcom, one that will always be haunted and hurt by its placement on Netflix’s platform.

The fact that the series itself seems so oblivious about the problems with its status as a Netflix original suggests that Netflix either really wanted to make a show about a victory that isn’t worth dwelling on or that no one involved in Blockbuster ever caught on to the self-defeating aspects of its own existence. Either way, Blockbuster lacks a level of self-awareness that it could greatly benefit from injecting itself with.

Blockbuster season 1 is streaming now on Netflix. Digital Trends was given access to all 10 episodes of the show’s first season.