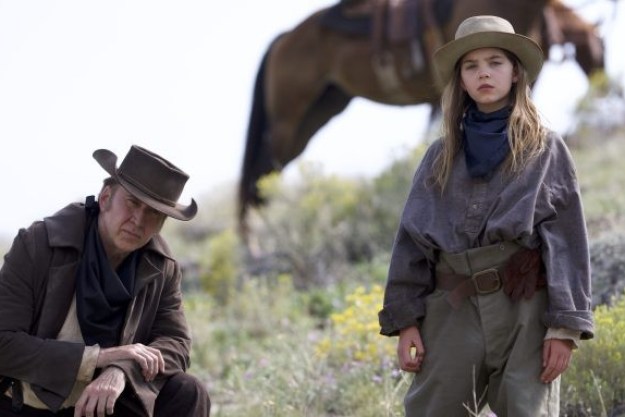 “Nicolas Cage's first Western doesn't blaze any new trails, but it does boast fine performances from its lead and co-star Ryan Kiera Armstrong.”

A good Western can cover a lot of ground, literally and thematically. Hollywood’s best Westerns tend to use the genre to explore complicated historical, emotional, and personal subject matter, sometimes with nuance, but more often with the sort of explosive, straightforward stories that create a trail of bodies and plenty of moral uncertainty among the story’s principal characters.

Director Brett Donowho’s The Old Way keeps things simple, but the film’s familiar tale of a grizzled gunslinger whose bloody past catches up with him still manages to deliver a few surprises, along with an entertaining performance from Nicolas Cage.

Based on a script penned by Carl W. Lucas, The Old Way casts Cage as Colton Briggs, a former gunfighter whose quiet life as a husband and father is torn apart by the adult son of a man he killed years earlier. Determined to avenge the murder of his wife, Colton sets out with his young, emotionally distant daughter to hunt down the man who brought his retirement to a brutal end.

On the surface, The Old Way is a fairly traditional, by-the-numbers Western. Anyone familiar with the tropes of the genre will have a good idea early on where the story is headed and who’s likely to live or die among the cast. Colton and Brooke’s dogged pursuit of McCallister’s and his gang leaves little time to delve into backstories, and the film’s villains are only developed enough to provide the occasional interlude as the story follows the father and daughter’s journey. When the two groups’ narratives finally reach a bloody intersection, the result is so predictable within the conventions of the genre and safe (narratively speaking) that it feels a bit anticlimactic.

What does set The Old Way apart from similar stories, however, are the performances from Cage and Armstrong, as well as some of the decisions it makes regarding their characters.

Cage is, as always, fascinating to watch as Colton. He’s great at playing simmering characters teetering on the edge of a moral divide, and Colton is exactly that sort of character, full of seething potential and equipped with a resting killer face. The script has Cage pivot between a more traditional man of few words archetype and a tortured soul whose bitterness pours out in a torrent of dialogue whenever someone inadvertently breaks the seal.

Armstrong plays off Cage’s character well, too, and the pair’s awkward relationship feels entirely in keeping with the genetics their characters share. The story’s exploration of their relationship sets the stage for one of the film’s few surprises, too, as Colton and Brooke gradually find common ground in the separation they feel from society.

Rather than simply paint Colton as a cold-blooded gun for hire and move on, the film explores the ease with which Cage’s character handles death and how it relates to the difficulty he has in connecting with people. What he reveals about the way his mind works and his relationship to the world around him would likely fall under Asperger’s syndrome or another disorder on the autism spectrum today, but in the Wild West era, it’s easy to see how the hand he was dealt in life turned him into the misunderstood man he is.

Cage delivers this fresh spin on the lone gunslinger to peak effect — particularly as Colton begins to realize that his daughter has inherited many of the same qualities that caused him so much suffering over the years. His desperation to set her on a different path offers some of the film’s most powerful moments, and differentiates The Old Way in some small — but effective — ways from the countless films it borrows from.

While the rest of the film holds few surprises, the performances by Cage and Armstrong in The Old Way elevate an otherwise rote Western into something far more entertaining. The film doesn’t take many risks and doesn’t take its character into many unexpected places, but it does tweak a few traditional elements in some intriguing ways that turn The Old Way into a story worth seeing through to its explosive finale.

Directed by Brett Donowho, The Old Way is now in select theaters, and available for on-demand streaming January 13.