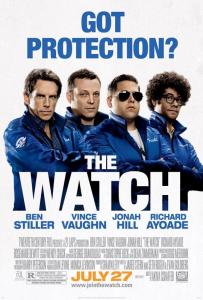 You know a film is in trouble when it has a cast filled with multiple stars who have carried films on their own, yet still resorts to a litany of cheap anatomical jokes to beg for a few laughs. You can almost hear it whisper “please laugh.” It’s sad, like a three-legged puppy that can almost reach its potential, but not quite. The Watch has a few things for it as a film, but it also missing a few key ingredients that it needed to hold the thing together.

Even before it hit theaters, The Watch lived a fairly tumultuous life. It had the misfortune of originally being named “Neighborhood Watch” and began its marketing campaign just three days after real-life neighborhood watch member George Zimmerman shot and killed 17-year old Trayvon Martin. The timing was poor. Of course, the film had nothing to do with any of that, but it was a bad omen, nonetheless.

The Watch features three of the most popular and well-paid comedians in film right now: Ben Stiller, Vince Vaughn, and Jonah Hill. Yet the funniest person in the film is Richard Ayoade, who only a handful of American audience members will recognize from his roles in the British TV comedies The Mighty Boosh and The IT Crowd. That is both a credit to Ayoade and a bewildering misuse of three very well-known stars.

Stiller plays Evan Trautwig, a suburban do-gooder who is hyperactive in his community and yet has no real friends other than his wife Abby (Rachel Getting Married’s Rosemarie DeWitt). When the security guard at the Costco he manages is murdered, and the police seem unable and unwilling to pursue the matter, Evan takes matters into his own hands and forms a neighborhood watch. Three people agree to join: Bob (Vaughn), Franklin (Hill), and Jamarcus (Ayoade), but all three are more interested in hanging out and drinking than patrolling the streets.

That all changes when the group stumbles across an alien invasion in their town that only they can stop. Hijinks ensue.

The Watch is an exceedingly predictable film — and not just in the plot, but in all aspects. Stiller once again plays the straight man, while Vaughn plays the overbearing and obnoxious guy with a heart of gold, just as he did in Old School, Wedding Crashers, Couples Retreat, and others. Both fall into their own personal routines quickly, and neither offer anything new. It feels lazy, like the characters are just the “best of” version of each personality, minus the “best” part.

Stiller’s uptight character needs a set of wild circumstances to really thrive, but it doesn’t go far enough. He reacts to things rather than engaging them, making him more passive. Evan is just so bland that he never really offers you anything to root for or care about.

Vaughn, on the other hand, seems to regurgitate the same jokes, delivered with the same quick-talking, contrarian personality you’ve seen again and again. It’s the exact same joke you’ve heard a thousand times from him, and its not even told that differently. I really like Vince Vaughn and have since Swingers. I just don’t need to see it again. Imagine him saying to someone disapprovingly “Yeah, real nice,” and you know exactly what you’re in for here.

Sophomore director Akiva Schaffer (Hot Rod) never manages to control the stars, so they don’t feel like part of a cohesive film. Instead, The Watch is little more than a vehicle to allow them to once again do the same roles they have both done several times before.

Hill, on the other hand, plays a fresher character. Sort of. Instead of the traditional lovable loser, a role that he has built his career on, Franklin is a lover of authority who was turned away from the police force for psychological problems. His role as the tough-guy psycho gives him a few good lines and moments, but he is little more than a supporting character, playing an almost subservient role to Stiller and Vaughn’s characters. There’s nothing wrong with that, but it limits what he can do and has him fall into predictable patterns as well.

Perhaps it is because the least is expected of him, but Ayoade’s Jamarcus steals the show repeatedly. Some of that is due to the oddity of his character, which is never easy to pin down or predict, and part of that is due to Ayoade, who often comes across like a more lovable Jemaine Clement. He’s just a likable guy that gets to be really weird. Unfortunately, of the four he is the least featured, as you might expect.

None of character problems, however, are nearly as problematic as the simple fact that the majority of the jokes just fall flat, and the “shocking” moments just aren’t that funny — or shocking for that matter. It’s stuff we have all seen before for the most part. I’m all for a good dick joke, but 20 bad ones get old fast. There are entire plot points dedicated to dick jokes, and none of them are particularly funny.

The Watch wastes the impressive talent at its disposal. You could replace the entire cast with that of the American Pie films and not miss a beat. It just all leads to an unremarkable film with a lot of wasted opportunities. It’s never really “un-funny,” but it won’t hold your attention for long either.

There are a few laughs to be had, but neither the comedy nor the plot ever really impress. Stiller and Vaughn dust off familiar suits and play characters you have seen them play several times, and they don’t do it particularly well. A lot of that is down to the generic script, but some of the blame has to go to Schaeffer. A stronger, perhaps more experienced director may have been able to rein in the cult of personalities and keep the plot driving the movie, but instead The Watch just comes across like a vehicle for the cast, and not a very good one at that.