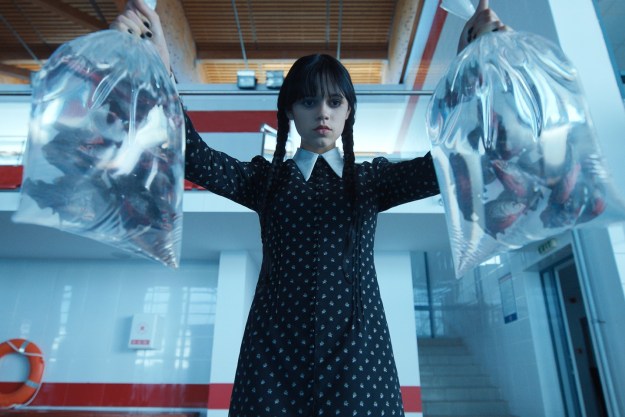 Wednesday Addams isn’t the first character that comes to mind when you’re searching for someone with the cachet to carry a solo series, but it doesn’t take long for Tim Burton and Wednesday star Jenna Ortega to make her star power abundantly clear in Netflix’s dark, delightfully entertaining series.

A spinoff of The Addams Family franchise, Wednesday follows the titular, elder Addams sibling after she finds herself expelled from high school due to a nasty incident involving the water polo team and two bags of piranhas. The event prompts her parents, Gomez Addams (Luis Guzmán) and Morticia Addams (Catherine Zeta-Jones), to enroll her in their former alma mater, prep school Nevermore Academy, which specializes in educating “outcast” children. As she attempts to forge her own path at the school, where her parents’ legacy looms large, Wednesday soon finds herself wrapped up in a mystery tied to killings in a nearby town.

Wednesday hails from Smallville creators Alfred Gough and Miles Millar, and although it manages to channel some of the same young adult drama the pair brought to their teenage Superman series, it’s Burton’s aesthetic that informs much of the look and feel of Wednesday‘s first, eight-episode season.

The Sleepy Hollow and Beetlejuice director helms the series’ first four episodes, and draws from a similar palette as his 1990 film Edward Scissorhands, which had its characters bouncing between two contrasting environments: One dark and gothic, and the other bright and colorful. Like the title character of that film, Wednesday’s adventures have her and her classmates — werewolves, sirens, and gorgons among them — navigating between the stark stone and dark forest of their gothic home and the bright streets of an exaggerated small-town America.

As one might expect, Burton is right at home in the comic-gothic vibe of Wednesday’s world, but he also manages to fit Nevermore surprisingly well into the brightly colored, traditional Americana surrounding it. The two aesthetics shouldn’t mesh as well as they do, but Wednesday makes the weaving together of these worlds feel surprisingly seamless.

While the look and feel of Wednesday is executed amazingly well, it’s Ortega’s performance as the title character that ultimately sells the series.

It’s difficult to imagine anyone nailing Wednesday’s dry, morbid personality as well as Christina Ricci in the live-action Addams Family films of the 1990s, but Ortega runs away with the role in the Netflix series. Ortega is a talented actress whose recent, well-received performances in Ti West’s X and Scream suggest she’s no stranger to dark subject matter, but Wednesday flexes an entirely different sort of approach to the material, and Ortega rises to the occasion. Her deadpan delivery rarely falters, and in those rare moments where the story calls for her to do so, Ortega finds just the right amount of subtlety to keep her character’s coming-of-age experience in character.

She’s not alone in giving a great performance, either.

In supporting roles, Guzmán and Zeta-Jones offer a version of the Addams Family central couple that’s both familiar and unique  and plays to the celebrated actors’ strengths. It’s no easy task to measure up to the portrayals of Gomez and Morticia in the original television series (John Astin and Carolyn Jones) and the two live-action theatrical features of the ’90s (Raul Julia and Anjelica Huston), but Wednesday‘s version of the deeply romantic, macabre duo finds the happy medium between their past and present incarnations. The same is true of Fred Armisen’s too-brief appearance as Wednesday’s iconic Uncle Fester, with the Portlandia star’s wacky performance playing well off Wednesday’s dry presence.

They mostly come out at night

Despite the series’ focus on Wednesday Addams, it also does a remarkable job of building out the entire Addams Family’s backstory in some fun, fascinating ways.

The fictional history of creator Charles Addams’ family of characters has rarely adhered to any sort of canon, and Wednesday sends the Addams Family timeline in some new, clever directions. The series sheds some light on Morticia and Gomez’s early years and burgeoning romance at Nevermore Academy, for example, and reveals some intriguing plot points about their time there and how it shaped some well-known aspects of the characters. Although the show keeps the spotlight on Wednesday, the story of the entire Addams Family feels significantly richer with the lore Wednesday brings to their saga.

Outside of the established Addams Family characters appearing in the series, Wednesday also introduces some compelling supporting characters to her world.

Gwendoline Christie (Game of Thrones) offers a nice foil for Wednesday as the headmistress of Nevermore, while Emma Myers portrays Wednesday’s eternally perky, optimistic roommate (who also happens to be a werewolf), Enid Sinclair. Both actresses give strong performances that tease out more of Wednesday’s character and give her the sort of surrounding cast of enemies and allies that make her feel like a more fully realized character.

Ricci herself plays a recurring role in the series, too, as the school’s botany instructor, Marilyn Thornhill, and watching her and Ortega interact makes for some extra fun, self-aware humor.

Fans of popular Netflix series The Chilling Adventures of Sabrina will likely feel some familiarity with Wednesday, which manages to hit the sweet spot between dark, supernatural adventure and teen drama surprisingly well. Wednesday goes quite a bit darker than that series, though, thanks to Burton’s influence and even more quirky characters.

Fans of Burton’s work, anyone looking to fill that Sabrina void, or viewers simply intrigued by the idea of a gothic horror-comedy with a compelling mystery at its center and a great cast of unique, colorful characters will find plenty to like about Wednesday. Mysterious and spooky and altogether ooky, the series is a scream in all the right ways.