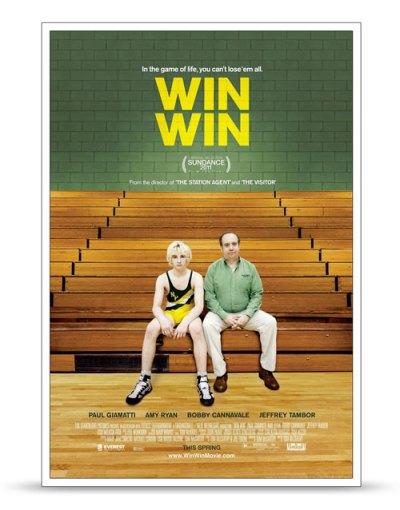 Behind its deceptively original looking packaging, Win Win is a somewhat predictable story about a boy in need of a family, and a family that is struggling but can’t turn him away. It is at times predictable, occasionally obvious and always entertaining.

When you have the story of an alienated youth and a family, you can somewhat expect what will happen right from the start. The details will be different, but in the end, you know that it will either have at least a somewhat happy ending, or be a seriously messed up movie. People don’t generally enjoy watching likable kids end up on the streets fighting to survive, so a certain level of predictability is not only expected, it is appreciated.

And that is exactly what you get with Win Win. There are flashes of originality sprinkled throughout, but in general you know what to expect. It is a dramedy, never veering too far into either comedy or drama, but the balance is an expertly handled one–thanks to writer and director Thomas McCarthy (The Station Agent, The Visitor), and strong performances by the entire cast, especially Paul Giamatti and newcomer Alex Shaffer. This film is subtle, and in that understated fashion, it relies on the little things. A look between characters, or a single line from a supporting character that adds life to the film and helps you relate to the situation.  The characters are believable and ring true, and they still manage to be entertaining and engaging.  Because of that, Win Win is one of the better films of the year so far.

Mike Flaherty (Giamatti) is an average American. He has a wife, kids, and a growing mountain of bills that he cannot pay. His New Jersey-based legal practice that specializes in helping elderly clients cannot be maintained for much longer, and even his secondary job/hobby as a high school wrestling coach is causing him stress, as his squad has yet to win a match.

When the elderly, but wealthy Leo Poplar (Burt Young) arrives at Mike’s office, it gives him the opportunity to score a little extra cash through harmless, yet somewhat dishonest—if not outright illegal—means. The influx of cash is a boon to Mike and his family, but it also brings with it Kyle Timmons (Alex Schaffer), who arrives in New Jersey from Ohio, looking for his grandfather Leo, who he has never met due to his estranged mother’s relationship with her Dad.

With Leo suffering from dementia, and Kyle refusing to have anything to do with his fresh-out-of-rehab mother, Mike is all Kyle has. Despite the misgivings of Mike’s wife, Jackie (Amy Ryan), Kyle comes to stay with Mike and his family for what is meant to be a brief time. Mike enrolls him at the local school, where he quickly establishes himself as a wrestling prodigy. As the days pass, Kyle and the family grow closer, and when Kyle’s mother Cindy (Melanie Lynskey) arrives with honey on her tongue and ulterior motives on her mind, things begin to go badly. Once Mike’s dealings with Leo come to light, everything changes.

As you might be able to tell, while the details are different—the kid wrestles, Mike may have done some shady dealings and a few other things—you can probably guess where the film is going almost immediately. The tone is set early, and you know that Mike is a guy you can relate to. That is established early on, and the stress of his situation is beginning to show. Mike’s actions with Leo are also fairly harmless, and you know he is not a bad guy. So when Kyle shows up, you can quickly see that Mike is going to protect him. From there the rest is a fill-in-the-dots story with a  few familiar twists. That isn’t a bad thing though. The alienated kid/family drama is a staple of movies, just like the “buddy-cop” genre, or “one guy kills thousands of terrorists to save the day” (or save a bank, or the American way, or whatever).

You know what to expect because it is a tested formula. The story of Win Win follows that formula well. It isn’t the most original plot in history, but it is one of the better examples of it.

Sometimes Being Naive Can be a Boon

Win Win is a character driven film, and because of that it needs to be handled by actors that you will buy into. Giamatti kills it, as always, and proves once again that it is a matter of time before the Academy just chucks an Oscar his way. The real linchpin of this film though is Alex Shaffer, who plays the taciturn star wrestler, Kyle. It works so well, because Shaffer himself was a taciturn star wrestler in real life. Less than a year earlier he was winning a state championship in New Jersey, and after a back injury made it impossible to defend his championship, he turned to acting.

The role of Kyle is a demanding one. The character is the focus of the story, and beyond that it is a meaty role, especially for a young actor. Kyle is dealing with the a scheming mother coming for him directly out of rehab, while he tries to find his place and decide what he wants to do. It would be a difficult role for a seasoned actor, and Shaffer delivers. Part of the reason he is convincing is that he appears genuine on camera. That may be due to natural talent, or maybe he just isn’t experienced enough to try to milk the emotion out of scenes, which is a good thing. You also have to credit McCarthy and Giamatti for getting the performance out of Shaffer that they do.

It also helps that the rest of the cast consists of a ton of talent. Amy Ryan plays Jackie, and it could be argued that she is the heart of the film. As she goes, so goes the audience. While the other characters are dealing with their conflicts somewhat internally, Jackie is the one that you can really gauge the tone of the movie on. When she likes Kyle, so will the crowd, and when she is angry at another character, you will be too. Win Win also has some genuinely funny moments, and the majority of those come from Mike’s friend Terry (Bobby Cannavale), a recent divorcee who volunteers to help coach wrestling to get his mind off his own problems. It isn’t a major role, but it adds humor without taking away from the primary characters.

The best thing about the jobs that the actors do is that they are subtle in their roles. There aren’t any over the top jokes, and the drama is believable because it is somewhat underplayed. The family is in financial troubles, but you won’t see the “evil” bankers threatening foreclosure, or anything like that. Because of it, you can truly relate to the characters and form a bond with them.

When Kyle’s Mom, Cindy, shows up, it is hard not to have mixed feelings for her. You want to hate her to make it easier to root for Mike and his family, and although she does a few things that border on despicable, her role is really to facilitate Kyle to find his own path. In the end it works much better than forcing a heavy-handed climax down the audiences’ throats.

Win Win is one of those movies that won’t break too much ground in terms of originality, but it really is hard not to like it. The cast is fantastic, and while it is too early to tell what kind of career and versatility Shaffer will have, he is a star in this movie.

The thing about Win Win that puts it above other, similar films is that it doesn’t try too hard to force the emotional weight of the situation down on you. The characters are all going through things that many of us have, or could go through, and because of that you relate to the story. The actors then make you buy into it, and from there you will be hooked.

Win Win is not a film for fans of big explosions and fast paced action. It also may not be enough to win over slapstick comedy buffs. But for those looking for a film that is entertaining and well made, you won’t go wrong with Win Win.