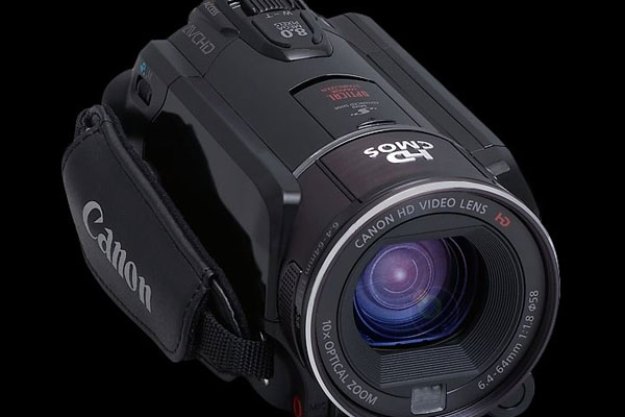 “You can't go wrong with the Vixia HF S20 as it comes from Canon's high-quality Vixia line of camcorders; the only question is which Vixia model suits your needs the best.”

We typically don’t test pre-production models, but when Canon offered one of the few samples in the U.S. of its soon-to-be-released top-of-the-line camcorders, we couldn’t resist. After all, this is the updated version of our 2009 Editor’s Choice pick, the HF S10, which remains one of the best we’ve ever used with dynamite video and high-quality stills. Here, the basic innards remain the same, but the key differences are a larger LCD, two SD Card slots instead of one and a new iPhone-inspired touch menu system. Let’s see if this remains an Editor’s Choice-grade offering.

Place the HF S20 next to the S10 and you’d have to do a double take to see any major differences. They’re there, however. The camcorders are stealthy looking, dressed in black, with only a few logos marring the surfaces, and the overall aesthetic is sophisticated, matching the built-in technology. The HF S20 measures 3” wide, 2.9” high and 5.5” deep – mere tenths larger than the S10. Weight for both is 1.1 pounds with battery and card.

There really isn’t much difference spec-wise. Both units have 10x zoom lenses, 8.59-megapixel CMOS sensors, take 1920×1080 video at 24 Mbps and can snap 8MP native resolution stills. What really sets the two models apart though are the LCD and the way you interact with it. The HF S20 has a beautiful 3.5” screen rated 922K pixels versus a 2.7” 211K LCD on the older edition. That screen had a small joystick to move through the menu system (which we liked). However, the HF S20 has embraced the iPhone’s preferred mode of input, and you now use the touchscreen to make your adjustments with swipes and taps. We found it to be fairly responsive with extremely legible menus. It’s beautifully done overall, and Canon gets a tip of the hat for this new design, although nothing beats the accuracy of the joystick (it may not be as cool, but it works!). Mind you, the HF S10 had a mode dial to switch between video/still; this is also gone and you now control everything via the touch screen. As noted earlier, the camcorder accepts two SD cards, but surprisingly not the new SDXC format found on Canon’s inexpensive digicams. Go figure.

Other features of note include an improved optical image stabilization system, pop-up flash with mini video light next to it and a few operational issues we’ll get into shortly.

What’s In the Box

The camcorder, of course, along with a remote; A/V, USB and component video cables; battery/charger; and CD-ROM with Pixela ImageMixer 3SE for handling video. The 220-page owner’s manual is also here as a PDF. An extra battery and a mini HDMI cable would be worthwhile add-ons.

This is a top-tier device for capturing movies and photos. For video, you can record 1920×1080 Full HD at up to 24 Mbps, the absolute best for AVCHD. With the 32GB of built-in memory, you can capture almost three hours’ worth of footage; drop it down to 17 Mbps and that total bumps up to four. And that’s not counting any high-speed SD cards you may use. As for stills, since the video camera has an 8.59MP imager, it takes 8-megapixel stills at native resolution—no interpolation, no nothing. Specs are 3264×2456 pixels in 4:3 aspect ratio. It’s not the 12-18MP of DSLRs, but it’s more than good enough for 8x10s.

Most people use Auto when shooting camcorders and cameras. While that’s all well and good, the HF S20 makes it easy to go beyond simple point-and-shoot functionality. Just slide the Auto/Manual switch near the record button and you have access to adjustments in both modes. The newly-designed menus and touchscreen controls make this easy to do. One of our favorites was the aperture adjustment in photo mode that lets you swipe it. As you raise or lower the setting, you see the results on the 3.5” LCD. Also on the photo side, the HF S20 has two burst modes—3 or 5 fps per second, as good as any sub-$1,000 DSLR. As a plus, there are 9 AF points so there’s little grabbing and accuracy is very good, although not as pin-sharp as better DSLRs. Digital single lens reflex cameras at this price level (like the $1,099 15MP Canon EOS 50D) have 9 cross-type AF sensors which are more accurate; the HF S20 has no cross-type sensors). But this is really quibbling. Photo quality is top-notch.

In essence, the Vixia HF S20 is a pleasure to use—as simple or as complex as you’d like. It feels just right in your hand, with a comfortable strap and logically positioned controls. With its improved menu system, there’s hardly need for the owner’s manual but it’s still a worthwhile read so you can dig into the possibilities. The screen, at 922K pixels, is a beauty. The Display button on the body gives it a boost if direct sunlight is a problem (and it was).

The results were not surprising since it’s basically a more refined version of the HF S10. Video was excellent. We used it during a blizzard and bright sunshine. The videos on a 50-inch screen were accurate representations of what we saw with our eyes which is exactly what you want from a camcorder. In these instances there was hardly any digital noise. We shot video of a candle in a dark room and there was definitely noise here though, just as there with photos taken in very low light. We recommend using the flash and video light in those situations. The new Powered OIS – which is designed to smooth out the shakes with telephoto shots – did a fine job.

Bear in mind, however, that although we’ve heaped mostly praise on the HF S20, it does have an Achilles heel. With its big screen and OIS, it drains juice from the battery quickly, much faster than you’d expect in fact, given the stated time. Canon should boost the milli-ampage on the supplied pack for the next generation—or at least provide a discount coupon for a spare.

Like 2009’s HF S10, this camcorder is hard to beat. Our only objection here is price, since it has an MSRP of $1,099 when it hits in April, plus you really need an extra battery for a long shoot. If you can’t wait for this one to arrive, the S10 costs $899 at legit online outfits or you can buy the new HF S200 for $999. (The latter has the same specs but there’s no internal memory; you supply it via the two SDHC card slots.) If you’re feeling flush, you can always wait for the $1,399 HF S21 with 64GB of memory and an electronic viewfinder as well. But no matter which option you choose, you simply can’t go wrong with these very sophisticated home video makers.

Best GoPro deals: Sales you can shop today
GoPro Hero 11 Black leak suggests a moderate upgrade
Astronaut reveals source of ‘intriguing’ bright light on Earth
Watch this Mavic 3 drone soar above the world’s highest mountain
How to clean up and organize your photos
This MagSafe iPhone rig aims to give your videos a more pro look
Nikon’s new 800mm lens for Z-mount cameras lightens the load
ReelSteady makes GoPro Player ‘reel’ useful for filmmakers
GoPro takes to the skies with the Hero10 Black Bones
How to turn off the camera sound on an iPhone
24 amazing images of our planet for Earth Day
Instagram test lets you pin particular posts to your profile
Snapchat’s pocket-sized Pixy drone takes to the skies