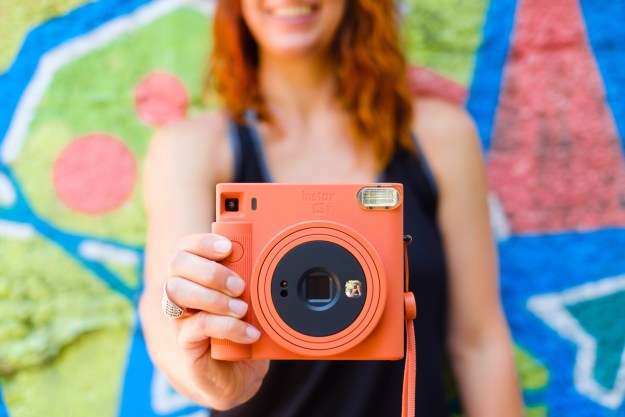 “Everything about the SQ1 is simple and easy to understand -- except the price.”

I have to admit, the Fujifilm Instax Square SQ1 has me confused — I’m not sure what it’s supposed to be. On one hand, it’s a very basic, square-format instant camera, seemingly targeting the most casual customer with its foolproof operation. Cool. But it also costs $120, which is more than the existing Instax Square SQ6, a camera with many more modes and features.

So why did Fujifilm make it?

Well, here’s why I thought Fujifilm made it. I had originally dismissed Instax as a fad, but have since come around to the idea that instant film is a heck of a lot of fun. Still, I only ever shoot it when I have an instant camera in for review. The reason for that is simple: I don’t like paying for the film. The cost of a single frame of Fujifilm Instax Square film is over $1 and isn’t likely to get any cheaper.

This is where a camera like the Instax SQ1, I thought, would come in. With its bare-bones, no-nonsense nature, it feels like it should be exceedingly affordable, thus making it easier for customers to drop more money on film. Except that’s not the case, as the decidedly higher-end SQ6 can be picked up for just $85. Unless the SQ6 is being phased out and replaced with an even more expensive model, I’m not sure where that leaves the SQ1.

There’s very little to say about the Instax SQ1 other than it’s easy and simple. It’s available in a trio of fun colors that include Glacier Blue, Chalk White, and my review unit’s Terracotta Orange. I probably enjoyed shooting the product photos as much as using the camera itself, but despite the standout appearance, the SQ1 is built to be as invisible as possible, to keep you focused on the moment and not the camera. Take it camping, bring it to a birthday party, or hand it to your toddler, this a camera for those times when you want pictures without having to think too hard about photography.

Whether that’s good or bad depends on what you want from a camera, but I’d argue the joy of Instax has always been its simplicity, an idea the SQ1 takes to heart.

While I wouldn’t call it small, it is quite thin and easily slips into a bag. You turn it on by rotating the lens, which has both normal and “selfie” positions. For the latter, you can use the small mirror next to the lens to frame yourself — one of the brilliantly simple innovations found on all Instax cameras.

The SQ1 is a true analog camera, not a digital/film hybrid like the Instax Mini LiPlay, so it doesn’t connect to your phone or offer any digital creative filters or effects. It’s as point-and-click as it gets, and that’s kind of the whole point.

Where some other Instax cameras have a few different modes, like macro and double exposure, the SQ1, well, doesn’t. In fact, it gives you no control whatsoever.

The parallax viewfinder is a fair distance away from the lens, which means you have to be careful when taking close-up shots as the framing through the viewfinder can be very different from what the lens actually sees.

Where some other Instax cameras have a few different modes, like macro and double exposure, the SQ1, well, doesn’t. In fact, it gives you no control whatsoever. Even the automatic fill flash can’t be overridden.

Depending on how you look at it, that makes the SQ1 either limiting or liberating, and I found myself leaning toward the latter, although I could definitely see people wanting the option to turn off the flash. If you’d rather have a few more capabilities, you’ll have to look into a different model.

It’s good to be square

I love the Instax Square format for its retro aesthetic, which hearkens back to Polaroid 600 film, although it’s a bit smaller at 2.4 x 2.4 inches. It’s a little like holding a physical Instagram picture in your hand (if Instagram still enforced a 1:1 aspect ratio, anyway).

Another benefit is that Instax Square film is bigger than Instax Mini film without requiring the huge jump in camera size that Instax Wide film does. And because it’s square, it’s as simple as can be. There are no landscape or portrait orientations to worry about, so every print comes out with the border on the bottom, making it a bit easier to create an orderly collage, if that’s your thing.

I love the Instax Square format for its retro aesthetic.

If you’ve shot an Instax camera before, then image quality is exactly what you’d expect. If you haven’t, there isn’t exactly a great way for me to show you since the sample photos you see in this review are all pictures of pictures. Instax film is not exactly high-resolution, but that’s part of the charm. The forced flash adds to the lo-fi look and ensures that images always come out bright. I was pleasantly surprised by the results but, again, if you want more control, this isn’t the camera for you.

Even by instant-camera standards, the Fujifilm Instax SQ1 is basic. It takes an already simple process and distills it into just the elementary essentials. It’s bright, fun, and effortless. That’s basically the full story.

Except I keep coming back to the confusing price. It’s not like $120 is exorbitant, I’m just not sure why the SQ1 costs even a dollar more than the SQ6. Am I missing something? Instax cameras commonly end up selling below MSRP (the SQ6 originally cost $130) but I still don’t understand the strategy behind introducing a lower-end camera that costs more than the street price of an existing higher-end model.

Well, it certainly seems like the SQ6 is a better alternative, assuming Fujifilm isn’t discontinuing it. It offers many more shooting modes and even comes with three different colored flash gels for creative lighting effects. And while it has more options, it’s not like it’s a complicated camera to use — it can still be just as simple as the SQ1 if you want it to be. It’s arguably the better-looking camera, too.

If you like the square format but want larger film, a Polaroid OneStep will give you that, but the camera itself is also bulkier — not to mention more expensive — than the SQ1.

Probably forever, or at least as long as there’s Instax film to load into it. There’s very little going on here, which means little to break. Other than the film, the only thing you’ll eventually need to replace is the battery.

No. Buy the Instax SQ6 instead. The Fujifilm Instax SQ1 perfectly accomplishes its goal of being a fun, easy-to-use instant camera. There’s absolutely nothing wrong with it. But why buy the base model when a more feature-rich version is available for less?

The best iPhone tripods for 2022
Netflix sheds light on its ‘approved cameras’ for filmmakers
Insta360’s next camera could be amazing for lowlight photography
The best 360-degree camera apps for iOS and Android
Nikon’s new 800mm lens for Z-mount cameras lightens the load
ReelSteady makes GoPro Player ‘reel’ useful for filmmakers
GoPro takes to the skies with the Hero10 Black Bones
How to turn off the camera sound on an iPhone
24 amazing images of our planet for Earth Day
Instagram test lets you pin particular posts to your profile
Snapchat’s pocket-sized Pixy drone takes to the skies
DJI Mini 3 Pro unboxing video drops just ahead of launch
GoPro Hero 10 Black vs DJI Action 2 vs. Insta360 One RS: Clash of the action cameras