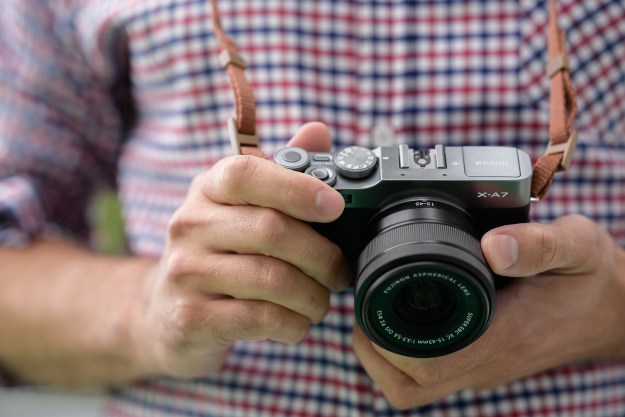 “You'll check out the X-A7 for its large touchscreen, but stay for its classic design.”

The Fujifilm X-A7 feels stuck between two worlds. Fujifilm is trying to balance old-school appeal with modern convenience, and it’s a bit of struggle. On one hand, this is a mirrorless camera with a very good 24-megapixel APS-C sensor, nice physical controls, and, of course, compatibility with Fujifilm’s excellent XF lens lineup.

On the other, it’s trying to win over would-be phone photographers with a large, 3.5-inch flip-out touchscreen and some built-in creative shooting modes.

It doesn’t fully succeed at either. I’m OK with that, but you may not be, depending on what you want out of a camera.

As an entry-level mirrorless camera, the X-A7 is great. It runs circles around the X-A5 thanks to a much better autofocus system and improved 4K video mode. If you need a good camera for travel and family photos, it’s a solid choice.

With no built-in viewfinder, you’ll rely on the X-A7’s fully articulating LCD screen to frame your shots. Fortunately, it’s one of the best on any camera in this class. Not only is it large, at 3.5 inches diagonal, it also boasts a resolution of 2.7 million pixels. That alone is a great feature on a $700 camera (and that’s with the XC 15-45mm f/3.5-5.6 kit lens included, mind you).

But there is an issue with this massive screen. Due to the size constraints of the camera, there simply isn’t room for a standard 3:2 screen at 3.5 inches. The X-A7’s screen is therefore 16:9, which is great for video, but not so much for stills.

Interestingly, my preproduction review unit arrived with the still image ratio set to 16:9, seemingly for the purpose of showing off the screen without a pillarboxed image. I’m not sure if this will be the default setting for the final camera, but you should probably change it if so. The physical aspect ratio of the sensor is 3:2; shooting anything else just means cropping away pixels.

The touch interface also leaves something to be desired. There are two different layers to it, a touch-friendly overlay menu and Fujifilm’s standard quick (Q) and main menus. The overlay menu offers access to slightly different settings depending on the exposure mode, including tap-focus control, white balance, film simulations (color profiles), focus mode, aspect ratio, and something called depth control (more on this later).

But tapping on one of these buttons takes you to the standard Fujifilm interface for that setting, not a touch-specific version of it. The white balance menu, for example, is just a vertically oriented list of options with most of them trailing off beyond the boundary of the screen; at this point, it’s simply easier to select one using the joystick. If you do try to navigate this list with touch, you will find yourself very confused. You have to scroll to select a setting — try tapping on one and it will instead advance you to the “white balance shift” option, where can manually dial in a tint on a two-axis color picker.

Did I lose you there? I should have. A two-tap solution for white balance shift is simply not a feature that the X-A7’s target customer needs, especially when it is so easily accessed by accident. The saving grace here is that absolute beginners who stick to the fully automatic SR Auto mode will not be presented with the white balance button at all, and will instead gain Portrait Enhancer (which looks to be a form of skin smoothing) and simple exposure compensation.

By default, other, more basic options like ISO are strangely hidden a layer deeper, inside the Q menu. Fortunately, two of the overlay menu’s touch buttons can be customized, so you can set one to ISO if you prefer. Given there is no dedicated button for ISO on the camera, this is something that intermediate and advanced photographers will likely want to do.

Let’s jump back to that depth control feature. This is a jargon-free way to control depth of field by opening or closing the aperture. You don’t have to know anything about f-stops — you simply drag the slider for more or less depth. Simple enough.

The odd thing about depth control is that it remains available even in manual exposure mode. Make no mistake, all it does is change the aperture, but because it doesn’t expressly tell you this and there are no equivalent touch-friendly controls for shutter speed or ISO, it may lead you to believe something else is going on. Don’t worry, there’s no depth map processing or simulated blur being applied here; in manual mode, depth control is just a redundant aperture control by a different name.

Touch aside, the experience is sublime

As critical as I may be of the X-A7’s touch interface, I still really enjoyed shooting with this camera, and I think any intermediate-to-advanced photographers will feel the same way. That’s largely because such users will likely bypass the touch controls almost entirely, and the X-A7 makes it relatively easy to do this.

With two control dials, you have direct access to both shutter speed and aperture. Many cameras at this level tend to have just a single control dial. You also get an autofocus selector joystick, so even if you turn the touchscreen completely off (which is an option), you still have one-button control over the focus point.

The camera weighs just 11.3 ounces but feels solid and well-made. All of the dials are firm and offer good tactile feedback. Nothing looks or feels cheap. The “dark silver” color of my review unit oozes class and sophistication, while other available colors — particularly the “mint green” — offer a bit more fun.

The X-A7 is also a good performer. It benefits significantly from a new hybrid phase and contrast-detection autofocus system with 117 selectable points. It is a big step up from the X-A5 in terms of speed, with significantly reduced focus hunting. Face- and eye-detection are also available and work in both still and video mode. The autofocus was the biggest factor preventing the X-A5 (and its sibling, the X-T100) from being an easy recommendation, and it’s great to see Fujifilm took that feedback to heart.

I wish it had internal image stabilization, but that’s a pretty rare feature in this class — and even rarer from Fujifilm, which still only offers it in one X series camera, the flagship X-H1. The kit lens, at least, is stabilized, but many of Fujifilm’s best lenses are not.

This being a preproduction model, the sample images you see here may not be indicative of final image quality, and thus I’ll withhold judgement until we get a production camera in hand. (RAW support also wasn’t available by the time of this review, so I’ve only been able to look at JPEGs.) Even so, I have no major complaints about image quality.

However, high ISO noise reduction was too heavy-handed for my taste, even when turned all the way down. This was interesting to me based on how Fujifilm has advertised this new sensor as being better in low light. The X-A7 should have improved noise performance thanks to new copper wiring, but the camera looks to still be relying heavily on noise reduction at ISO values of 3,200 and above. I’ll have a better idea of actual noise performance once I can open the RAW files.

Video is probably where the biggest improvements in quality have been made. The X-A5 could technically shoot 4K, but it was limited to just 15 frames per second. In other words, it was unusable. The X-A7 now shoots at up to 30 frames per second, and from the full width of the sensor. For the cinematic look, 24 frames per second is also offered. A microphone jack is included, but it’s the smaller 2.5mm size, so an adapter will be needed to use a standard external microphone.

These are good specs for a $700 camera. Combined with the flip screen and eye-detection autofocus, the X-A7 wouldn’t be a bad vlogging camera.

However, even more so than with the stills, I have to reserve judgement of the video quality. There was one behavior involving continuous autofocus and/or autoexposure that could potentially ruin a shot, and it’s my hope that this will be resolved in the production camera. For now, I’ll remain cautiously optimistic.

Then there’s the lens. The XC 15-45mm f/3.5-5.6 kit lens that comes with the X-A7 is far from the best. It’s small and lightweight, which is great, but if you’re looking at the X-A7 as your first Fujifilm camera, know that there are much better lenses out there. I wish Fujifilm offered a kit with the XF 18-55mm f/2.8-4, which is a far superior lens, but that would likely increase the cost by several hundred dollars.

The X-A7 may be billed as a phone camera replacement, but the truth is, it’s a classic Fujifilm X-series camera through and through. The stylish design, large articulating screen, solid physical controls, and greatly improved autofocus make it a strong contender among low-end mirrorless cameras, even if the touch interface isn’t as good as I would have liked.

The closest competitor is the Sony A6100, but it’s priced $50 higher than the X-A7 — without a lens. Add a lens, and you’re looking at a $150 difference. The X-A7 can’t quite match the advanced real-time autofocus capabilities of the Sony, nor its 11-frames-per-second burst rate, but otherwise it should hold its own.

As your first interchangeable lens camera or your first dip into the Fujifilm X ecosystem, the X-A7 is not a bad choice. It offers good all-around performance — and no one can argue with its sharp looks.

Topics
Best GoPro alternative action camera deals for October 2022
The DJI Osmo Action 3 looks nothing like the Action 2
GoPro Hero 11 Black leak suggests a moderate upgrade
Astronaut reveals source of ‘intriguing’ bright light on Earth
How to remove the background from an image
Instagram boss says to expect even more video content
6 awesome Earth images captured from the ISS in July
This GoPro Hero 10 bundle is $100 off at Best Buy today
The best iPhone tripods for 2022
Watch this Mavic 3 drone soar above the world’s highest mountain
How to watch DJI unveil an all-new drone today
DJI Avata vs. DJI FPV: Which first-person drone is best for you?
Astronaut’s video offers rare fish-eye view from the ISS