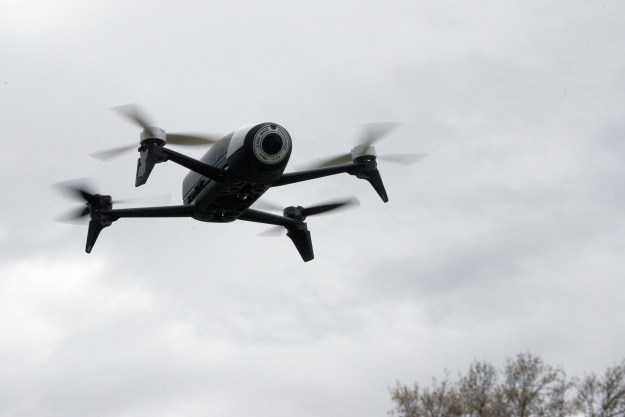 “The Parrot Bebop 2 gets new toys to make it fly better.”

When Parrot first launched the Bebop 2, it had managed to make its flagship quadcopter drone a little smaller, while making flight performance just a little sturdier. It also doubled the flight time, and attempted to improve the overall composition from the onboard 1080p HD camera. The Bebop 2 FPV is essentially the same drone, except for new accessories that help change how it feels to fly.

FPV, or “first-person view,” refers to the included VR headset to see what the drone sees firsthand, but the accessory that makes a bigger impact is the SkyController 2 remote control. We took the Bebop 2 FPV for more than a few piloting sessions to get a grip on how this bundle flies.

As far as the Bebop 2 drone itself, it wouldn’t be right to call this an “FPV version” because the design and mechanics inside are the same. It’s the reason why Parrot also sells the CockpitGlasses VR headset and SkyController 2 remote control separately as a bundle. If you already own a Bebop 2 drone, you can buy those two accessories and pair them with it.

That means you get the same 500 grams of weight in the drone, with the same 2,700 mAh battery that slides into the hull on top. The propellers are essentially the same, only they have to be installed on the Bebop 2 that comes bundled with the new accessories. Parrot purposely lined them up in the box to correspond with which rotor they’re supposed to go on, mainly because of small differences in design that ensure they stay firmly in place.

The same 14-megapixel camera with 1080p resolution is up front, though Parrot seems to have managed to improve image quality through software optimization, which I’ll touch on a little later.

The 8GB of internal storage is not very high, and can fill up really fast when recording longer video clips. The FreeFlight Pro app does offer a choice to download footage and still images directly to the phone or tablet. Another alternative is to plug the drone in to a PC or Mac directly and offload them that way.

The SkyController 2 and CockpitGlasses are actually the same as the ones bundled with Parrot’s Disco fixed-wing drone. They are interchangeable and can be paired with either drone, so Parrot is keeping things within the family here. These two accessories are the biggest design changes. Well, the CockpitGlasses headset is new, while the SkyController 2 is a major overhaul from its predecessor.

The first SkyController had a more hulking build that included an optional neck strap for better stability, plus two handles to hold it in place with a wide Wi-Fi antenna. This new-look controller is less than half the size and looks and feels more like a video game controller. The Wi-Fi antenna is considerably smaller, and the smartphone/tablet holder is detachable.

The Bebop 2 FPV does benefit from a redesigned layout and some extra features.

The battery is also internal, rather than external like before. The previous SkyController used the same 2,700mAh battery as the Bebop 2, which only added one more thing to bring along for a flying excursion. Having the rechargeable battery inside is not only convenient, but we found it lasted just as long too.

The headset looks like a standard VR headset, but it’s not quite as nice as Google’s Daydream View or Samsung’s Gear VR. It supports just about any iOS or Android phone between 4.7- and 5.5-inch screen sizes, making it widely agnostic, but its only purpose is to run FPV mode. We tried running VR apps on it, and though Cardboard stuff worked fine, it was somewhat cumbersome, so we just stuck to using it for flying the Bebop 2.

Having since updated to the FreeFlight Pro app, the Bebop 2 FPV does benefit from a redesigned layout and some extra features. Parrot still allows pilots to fly the drone using the app as a controller on a phone or tablet, but the SkyController 2 changes that completely.

The app does allow for customizing some aspects of the controller, like reassigning the A and B buttons. By default, A snaps photos, B records video — except they can be mapped to specific flips. One reason for doing that is because the Bebop 2 can only do one at a time through the app, whereas one each can be assigned to the A and B buttons.

Settings offers plenty more, but the defaults are a good place to start, particularly when it comes to limits set for altitude and distance. A Return to Home button is obvious by the home icon on the button, while the takeoff/landing button is prominent in the middle. Above that, the power button has an LED indicating status.

Pairing the controller and VR headset to the app was pretty straightforward, though we did run into a couple of instances where we needed to restart everything and try again.

Parrot recently added a “Follow Me” feature allowing for the drone to follow a subject using GPS and visual tracking. It’s a $20 in-app purchase with a 15-day trial, and has been expanded to offer various modes. The two main shot selections are Auto-framing that keeps the subject in the center of the frame while flying, while Auto-follow uses a smartphone’s GPS and visual recognition to stay on the subject.

Taking off and landing are exactly the same as they were with the original Bebop 2. We saw no difference in that at all. Even flight was effectively the same, save for the better range afforded to us by the SkyController 2.

Unlike other drone makers, like DJI and Yuneec, Parrot uses Wi-Fi to communicate with the Bebop 2, not a proprietary wireless signal that could go longer and wider due to lack of interference from other networks on the 2.4GHz or 5Ghz bands. The new controller seems to offer a sturdier connection, but the range is limited, which we noted while flying. Still, it was better than we had experienced before, and were able to go as far as just over a mile before losing the live video feed, which forced the drone to turn back to home.

Another $20 in-app purchase is Flight Plan, allowing us to set multiple waypoints the drone follows until it swings back to its takeoff point. Scenario mode is a mixture of altitude fluctuations, flips, orientations, photos, and photos/video meshed into one flight.

In-flight stability was a little hit or miss. At times, we were impressed with its ability to shake off wind gusts and maintain smooth video recording, whereas we felt let down when it didn’t pan smoothly moving laterally. Wind conditions matter for any quadcopter, regardless of size and build quality, but strong winds made it difficult to get consistently smooth footage.

Image quality, however, has gotten a boost. Parrot had seemingly changed little from the first Bebop’s camera when it first launched the Bebop 2, but subsequent firmware updates have helped improve both clarity and stabilization. Again, strong wind gusts may have an impact, but anything less than that didn’t affect camera performance at all.

Previously, the camera habitually overexposed bright scenes, which caused desaturation all over. That has since been dialed back, though we went into the settings to try and gain some manual control to offset it further, given how it can still creep in.

The SkyController 2 is arguably the biggest change to flying the Bebop 2 because it feels like a video game. Moving in any direction and reorienting the viewpoint felt fluid, even more so than the previous SkyController. It does need to be tethered to a smartphone or tablet in order to get synchronize the controller with the live view provided by the app. That’s a carryover from how the previous controller worked, only because of the smaller form factor, it doesn’t feel cumbersome.

The latency was noticeable, especially when the Bebop 2 flew a greater distance away.

FPV mode changes things further, putting the drone’s camera right before our eyes. It can be a pretty exhilarating feeling, especially when moving with speed or navigating around obstacles. The onscreen HUD presents information, like altitude, distance, and altimeter to provide context. Again, the CockpitGlasses benefit from the SkyController 2 in that flight feels more secure and seamless.

It took us a while to get used to flying well without the headset, and more than a few tries to feel confident with it on. However, the latency was noticeable, especially when the Bebop 2 flew a greater distance away. Parrot had quantified it at about 220ms, but we think that’s a variable number that may go up, depending on distance and wireless network interference.

Battery life is also rated at 25 minutes of flight time, which might seem short, but was already double what the original Bebop could do. That number is a ceiling, with the real figure being closer to 15-20 minutes once you throttle it forward, do flips, and raise its altitude where winds are less obstructed.

Parrot offers a one-year warranty on “support and assistance” and a 15-day return policy when purchased directly from the company. Sales from retailers defer to their return policies, which may or may not mirror those of Parrot’s.

The Bebop 2 comes off as the same drone on the surface, and it really is when breaking down the sum of its parts, except the accessories and app updates have pushed it to a different level. We would hesitate to call this “elite” because it doesn’t have the robust builds of other brands, but we totally dig its size, and how easy it is to pack up and take on the go.

The smaller form factor also makes it easier to fly, something we think is only augmented further by the accessories bundled here. Adding a follow feature was a major hole that has finally been filled, positioning the Bebop 2 as a more complete drone with better aerial photography options.

Parrot has some stiff competition in the quadcopter arena. Having emerged as one of the stalwarts in the category, DJI offers a small, lightweight build in the Mavic Pro that shoots in 4K. Even the DJI Phantom 4 Pro, which is considerably more expensive, might be a better option if you’re concerned about durability.

Then there’s Yuneec’s Typhoon H is a hexacopter with folding landing gear that gives its 4K camera unobstructed views — a clever feature we approve of. And GoPro’s first drone, the Karma, was saddled with problems since it launched, but the company says everything is back on track now. If you want the same FPV experience with a twist, Parrot’s Disco fixed-wing drone uses the same camera, controller and headset.

It helps that Parrot designed the Bebop 2 to be repairable. Crashes could eventually take their toll on the drone, even if it withstands more than it may seem. Two sets of propellers come in the box, but no other parts to note. Repair kits and spare parts are readily available from Parrot, covering just about every nook and cranny of the Bebop 2, ensuring the drone isn’t finished after hitting something it shouldn’t have.

For what the bundle provides, we would say yes. The Bebop 2 is a good model to learn the art of drone flying, and the FPV bundle comes at a price below competitors.