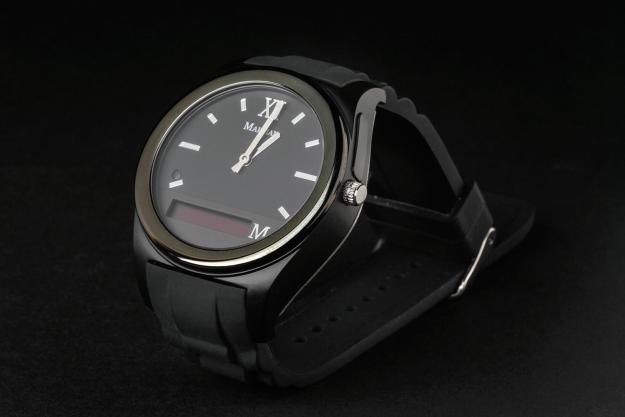 “The Notifier is a good bridge between traditional watches and wearable technology. It may not do much beyond alerts, but it handles them amazingly well.”

The smartwatch category has been generating an awful lot of buzz without delivering the goods. A glance at our line-up of smartwatch reviews betrays a distinctly disappointing bunch of devices.

Smartwatches have been trying to cram in tons of features (perhaps too many) and the aesthetic has taken a backseat. This is a problem because the current (dumb) wristwatch market is largely based on style.

The Martian Notifier could be the baby step that’s needed to get people into high-tech watches. It doesn’t try to do too much. It focusses on relaying notifications from your connected Android or iOS device, and it is also a familiar-looking analog watch.

Martian has taken a step back from its original voice command watch with the Notifier. This is a distillation of the smartwatch idea, and that helps to make it very accessible. The budget friendly $130 price tag also won’t do its prospects any harm at all.

In the chunky world of flashing, bleeping smartwatches with 1.5-inch square screens, the Martian Notifier is positively understated. It can easily pass for a normal watch and that’s because it is, mostly.

The Martian Notifier could be the baby step that’s needed to get people into high-tech watches.

It has a traditional 1.7-inch round analog watch face capable of running for up to two years from its own separate standard watch battery. At the bottom of the watch face you’ll find a tiny 96 x 16 pixel monochrome OLED. Slightly above it to the left there’s a color notification LED.

It’s a bit chunkier than a standard watch with a depth of half an inch (12.7mm), but that’s cleverly disguised by the masculine styling. The silicone strap is comfortable and you can buy colorful alternatives if you want to change up the look. You can actually fit some standard 22mm watch bands, but they’re not all going to look right.

It weighs 1.83oz (52g), so it doesn’t feel much different from a standard watch and it’s comfortable enough to forget about.

The right side has a pull out button that you rotate to set the time, just like any wrist watch. A hidden flap reveals the Micro USB port, which disappointingly requires a long plug because of its depth; this means you have to use the Martian cable provided to charge it.

On the left there are two buttons to control the smarter side of your watch.

The black version is classy and understated, but that chunkiness is going to be accentuated on more delicate wrists and there’s no escaping the fact that it will catch a little on shirt cuffs. There are also red and white variants with a slightly different style of watch face.

Pairing is a breeze. Download the app for your iOS or Android device and switch Bluetooth on. Now press both buttons on the Notifier and select the right platform (it defaults to iOS). Tap Start in the app and off you go. The light flashes blue while it pairs and there’s a little bit of set up to run through.

It’s most useful paired with a smartphone and it should work with any Android 2.3.3 device or later and the iPhone 4S and up. You can also use the Notifier with an iPad or tablet, or even an iPod Touch (fifth-generation) if you want to pair it with your MP3 player.

As the name suggests, this watch is all about notifications. You can decide what apps should send you alerts on the Notifier and they’ll come through as vibrations, flashing LED, and text on the screen.

Beyond the phone basics like text messaging, calls, and emails, there’s a big list of compatible apps that you can choose to get notifications from. Almost any app works with this watch, out of the box.

You can select individual vibration patterns for each alert type. There are four slots for a pattern and each one can be set to a long vibration, a short vibration, or a pause. It’s a little difficult to discern a difference to begin with, but you’ll soon be conditioned to recognize the specific pattern of an email, or whatever else you’ve set up.

The flashing LED does a good job of catching your eye if you miss the vibration. It flashes blue for an incoming notification, red when the power is low, and green when it’s charging.

The alert system works best with text messages, as it will show the name of the person messaging you followed by a ticker tape readout of what they have to say. It’s basically mirroring what appears in the notification shade on your Android device. With emails it tends to just catch the sender and subject, though that’s generally enough to decide whether you need to read the full thing right away or not. Alerts repeat once and you can set the delay and scroll speed in the app. You can tap the screen to dismiss an alert.

You can also tap it to recall the last notification within a five minute period.

All this really does is save you from taking the phone out of your pocket for non-vital notifications. You’ll still have to pull the phone out to answer a call, or read the full text of an important email. That doesn’t sound like much, but it’s actually pretty handy for a couple of reasons.

Less wasted time: You don’t have to waste time pulling your phone out to reveal a spam email, or a text that doesn’t require a reply, and if you get a lot of incoming messages this can save a lot of time over the course of a day.

Covertly stay connected: you can check what your phone is saying surreptitiously. It’s not cool to pull your phone out when you’re in a face-to-face conversation, in a meeting, or at the dinner table, but you can get away with a glance at your wrist. With the customizable vibrations you don’t even necessarily need to look to know what’s incoming.

The Martian Notifier supports Bluetooth 4.0 LE and you can expect it to work with your phone in a range of 10-20 feet depending on obstacles. This means you don’t have to carry your phone on you all the time.

We tested it with the Xperia Z2 and iPhone 5S, and found that once established the Notifier maintained a connection without a problem. If it went out of range or the phone was turned off, the link would be reestablished again automatically as soon as it was possible.

It’s not entirely a one-trick pony

Martian has added a couple of other features to the Notifier. When you tap the lower button you can get a battery read-out, date, temperature, and weather. Tap the top button and you’ll activate voice controls on your phone, for us this defaulted to Google Now or Siri and it proved to be a handy shortcut to hands-free if you have your phone sitting on your desk.

Tap the lower button more than once and it will start to cycle through the menu. You can activate the LED as a light, turn on a “do not disturb” mode, use your watch as a smartphone camera remote control, and find your phone if you’ve misplaced it (it plays a short tune on the phone).

The camera remote is great for group shots, and any forgetful people or parents with young kids who love to hide phones will appreciate the “find your phone” feature. Beyond that, there’s a setup menu where you can choose your language, the date format you want, set up the leash function (so the watch warns you if you stray too far from your phone), turn the LED off, choose Android instead of iOS, and update the firmware. The Martian Notifier app also allows you to change your time zone, decide if you want weather updates, and set basic alarms and reminders.

The fact that the watch battery is separate is a very smart move. Even if this runs down on the smart feature front it will continue to work as a watch for up to two years.

The fact that the watch battery is separate is a very smart move.

How often you have to charge up the lithium polymer rechargeable battery that powers the alerts depends on how many apps you allow to send notifications, how often you receive incoming alerts, how strong the vibration settings are, and whether you use the LED.

You should get at least three days between charges, but five or six is realistic if you don’t have everything triggering alerts. Setting them up for all app notifications seems like overkill to us and filtering for what’s important to you should see the Notifier last five days between charges quite comfortably.

It’s worth bearing in mind that the Bluetooth connection and the constantly running Notifier app are going to impact on your smartphone battery life. It’s not a huge impact, but it’s definitely noticeable.

The Martian Notifier isn’t a groundbreaking device. It doesn’t have voice commands or a raft of apps; it doesn’t allow you to control your music; and there’s no built-in camera. Compared to the rest of the field, it’s definitely more “watch” and less “smart.” There’s room for improvement. It could be waterproof, slimmer, and we’re not fans of proprietary cables.

Still, what it does do it does very well. The notification system is completely customizable and the snippets you get on the tiny screen are enough to be useful. It will genuinely prove valuable for people who are in the habit of slipping their phones in and out of their pockets countless times a day. It’s the perfect device for stealthily checking your alerts.

That feeling of stealth also carries over to the design. Some people will appreciate the fact that the Notifier can pass unnoticed. It isn’t screaming “tech geek” to all and sundry like many of the smartwatches currently available.

No manufacturer has really nailed this category yet. At $130 the Martian Notifier feels like a gentle introduction to wearable technology. It’s not trying to run before it can walk. We fully expect more impressive entries in the smartwatch category down the line, but this is a good compromise of style and substance right now.