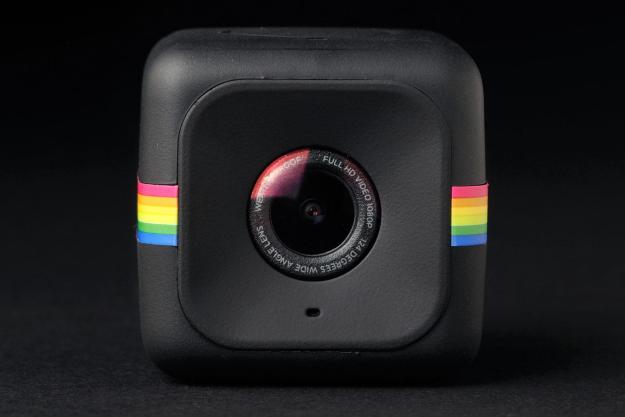 “Polaroid’s Cube isn’t as tough as a GoPro or as high-quality as a handheld cam, but at $99, the easy-to-use action cam makes a novel way to shoot from new perspectives.”

When you think of the best action cameras, Polaroid might not be the first name that comes in mind. However, the company (which is mainly a licensee) does have a series of them designed for the budget user. The $99 Polaroid Cube, released in late 2014, takes an entirely different approach by using a concept that’s more lifelogging camera than action cam. It’s small, cute, and dead simple to use – ideal for kids or anyone who doesn’t want something overly complicated. A clever magnetic bottom lets you easily attach the camera to any metal surface. Our Polaroid Cube review shows that this affordable action cam can’t compete against the GoPros and Sonys — but there’s a certain charm about it nevertheless.

The Polaroid Cube shoots video in either Full HD 1080p or 720p, and snaps 6-megapixel photos. By design, the Cube is an extremely simple camera. As the name suggests, it’s a perfect cube that measures approximately 1.4 inches all around, and it’s incredibly lightweight. It’s small enough that it fits easily into any clothing pocket, and easy to handle between your fingers or hold in your hand. We received an all-black unit for our review (with the trademark Polaroid rainbow striping on the side), but it’s also available in red and blue.

While the Cube isn’t fully rugged, the rubberized body is made to be weatherproof, so you can splash water on it; just don’t take it for a dunk. We used it during some light rain and it operated like normal. If you want to use the Cube in the water, Polaroid offers a underwater housing for $25. It’s also feels durable, but we wouldn’t go kicking it around.

On the front is a 124-degree wide-angle lens and a microphone. On the top is the Cube’s only button, which serves as the power button, photo shutter button, and video record button. There’s also an LED indicator that lights up green on standby, and blinks red to signal it’s recording video or snapping a photo (it lights up orange to indicate low battery, no memory card, or connection to a computer). On the back, behind a cover, is a Micro USB port, MicroSD card slot (supports up to 32GB), and a switch to select either 1080p video or 720p. The cover requires using a coin to open; when closed and locked, it has a tight seal that’s difficult to twist open if you try to use your fingernail.

On the bottom is a magnet that’s strong enough to adhere the Cube onto anything metal, without special tools.

A magnet on the bottom can be used to mount the camera, which is where the Cube differs from other action cameras that utilize a tripod screw or other type of mounting system. The magnet is strong enough to adhere the Cube onto anything metal, which lets you quickly attach it without special tools. It also lets you stick it onto odd places for shooting unique views, like the handlebar of your bicycle or the top of a skateboard; in a marketing photo on its website, Polaroid shows the Cube placed on the metal head of a golf club. As strong as the magnet is, we can imagine one falling off easily with enough jostling (we were able to use it to pick up an Apple Magic Trackpad for a bit, before it detached due to heavier weight). One annoying thing we encountered is that Polaroid doesn’t include any additional mounts, so we found it difficult to use other than holding it in our hand. We couldn’t attach it to our clothing, or strap it to anything that’s non-metal. Polaroid does offer a variety of mounting accessories, however, which includes a portable stand (shaped like the body of a monkey), tripod mount, helmet mount, strap mount, and more, but they are all optional and cost $18 each.

Unlike more expensive action cams, you won’t find any advanced shooting modes, settings, or features. With no LCD, you can’t watch a Live View image or play back content. With no Wi-Fi or Bluetooth, you can’t pair it with a smartphone for remote viewing or operation, image transfers, or uploads to social networks. You’ll have to connect it to a computer (or pop the Micro SD card into a card reader), and copy the files over. To change settings, you’ll need to access the Polaroid Cube application that the camera installs onto the card.

Despite it being barebones and not having Wi-Fi, battery life isn’t spectacular, and that may be because of a small, non-removable battery inside. It’s rated only for 90 minutes.

Don’t expect much. You’ll find the camera, a short Micro USB cable, and a simple user’s guide and warranty info.

Even though Polaroid calls the Cube a “sports lifestyle action video camera,” it says it isn’t competing with the undisputed champion of action cameras, GoPro. However, for any company that sells an action camcorder, parallels to GoPro’s Hero cameras are going to be drawn. Seemingly, Polaroid is going after kids and the budget-minded who want a fun and easy-to-use camcorder, who may not plan to do anything with the footage other than watching them later with friends, or uploading to YouTube.

Like most POV cameras without an LCD or remote-viewing capability, you’re shooting blindly. You can guesstimate about what you’re shooting, and the Cube’s wide-angle lens should capture a lot of the fish-eye field-of-view. As we’ve already mentioned, we held the Cube with our fingers most of the time when shooting, since we didn’t have any mounts we could use. Because there isn’t any image stabilization feature, our videos were bouncy.

But for a $99 action camera, the footage we shot was surprisingly nice. Sure, it’s no GoPro or Sony Full HD at 60 frames per second, but we thought the videos, for the most part, looked pleasant enough and were smooth (minus the bounce we added). Colors weren’t as vivid as we would have liked, and details could have been sharper, but for its intended audience, we think the videos aren’t bad at all, considering how small the camera is. We recommend you put the Cube on something even and steady. The Cube pretty much fails in low or no-light situations, producing noisy photos or ones where you can’t make out anything, but that’s to be expected. Photos don’t look awful at smaller sizes, but they aren’t great either, and we wouldn’t use it as a main camera; whether in small or actual size, you can clearly see the defects.

You may be asking, “Why would I use this when I have a smartphone that can probably take better photos and videos?” That may be true, but the Cube’s size, price, quick mounting system, and durability definitely make it unique enough that it stands alone.

With its low price tag, we didn’t expect the Polaroid Cube to perform miracles, yet in our Polaroid Cube review, we were pleased with the video quality (just try to keep things steady, unless you’re actually in the middle of some action sport). We like the magnetic mounting idea, but we wish Polaroid had thrown in some sort of alternative mount (there is a magnetic plate that’s glued to the packaging, which you can salvage and reuse). If you are looking for a cheap, easy-to-use, and durable action camera to give to a kid, the Cube would make a nice gift, especially if it goes on sale. It doesn’t have the hip-factor or performance of a GoPro or Sony camera, but it isn’t as expensive or complex to use (although, GoPro recently announced its entry-level Hero that doesn’t cost that much more, and it comes with an underwater housing and has more features).

Update on June 24, 2015: Polaroid has announced a new version, the Cube+, that adds Wi-Fi connectivity, making it mobile friendly. The size remains the same, which indicates how small Wi-Fi components are getting. It records video at Full HD 1080 and 1440p, but photo resolution has increased from 6 megapixels to 8MP. The Cube+ works with a companion app for iOS and Android. Other specs remain the same, and will retail for $150 when it arrives in August. It will come in black, red, and blue.

In addition, Polaroid is introducing two new colors to the Cube line: hot pink and a green that glows in the dark.

We may have just seen the Meta Quest Pro, and it looks super sleek
2024 Chevrolet Equinox EV aims for affordability with $30,000 base price
3 upcoming gaming monitors worth getting excited about
This startup claims to have unlocked the secret to speedy CPUs
SpaceX Starlink internet heads to first cruise ships
We really didn’t expect these two new contraptions from LG
There’s a problem with those amazing Ryzen 7000 benchmarks
Halo Infinite Season 3 delayed until 2023, split-screen co-op canceled
Apple’s antivirus strategy for Mac has gone fully preemptive, but is that enough?
Intel admits to one key regret about its launch of Arc GPUs
Here’s why you need to update your Google Chrome right now
Malware has a terrible new way to get to your computer
Jeep is launching its first two electric SUVs in the U.S. in 2024