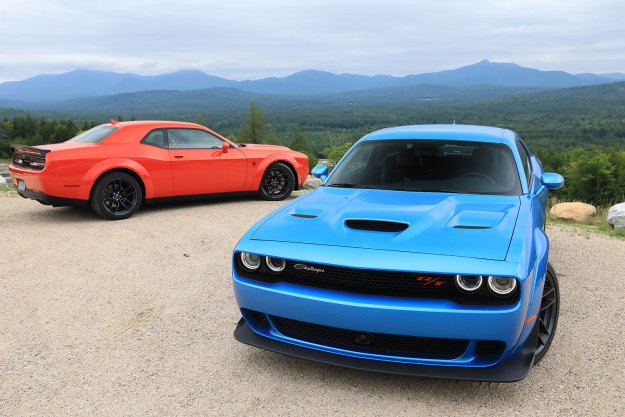 “Wide tread, natural aspiration, and track tuning throughout make the Challenger R/T Scat Pack Widebody the nimble corner carver that the T/A 392 should have been.”

When Dodge announced the 2019 Challenger lineup, it was the SRT Hellcat Redeye that garnered all the attention. And why not? The marriage of a Hellcat to the world-beating SRT Demon’s powertrain makes for a great headline. Still, while we’re certainly not ones to scoff at the introduction of an 800-horsepower muscle car, we noticed the introduction of another notable package was getting a bit lost in the noise.

With the debut of the R/T Scat Pack Widebody, not only does the Hellcat Widebody’s aggressive look become accessible to buyers for about 40 percent less coin than it required last year, it also brings the most track-focused components in the Challenger parts bin to the model that’s best suited for track work.

When the Challenger T/A debuted for the 2017 model year it was, to some degree, designed to fill that role. As a homage to the original homologation cars used in the Trans Am racing series back in 1970, its lineage drew directly from those corner-carving road course machines from the original muscle car era. While the look was on point, it didn’t have the hardware necessary to substantially elevate the Challenger’s dynamic prowess. The Scat Pack Widebody doesn’t suffer the same fate.

While it lacks the throwback style of the T/A, the Scat Pack Widebody makes up for it by being almost indistinguishable from last year’s Hellcat Widebody from a visual standpoint, a beefed-up look that adds 3.5 inches of overall width to the car in the process. It also backs up the aesthetic with a thorough retooling of the Scat Pack’s suspension and steering systems while adding significantly more grip and stopping power to the equation. Although Dodge won’t admit it outright, the result is the most road course-friendly production Challenger built to date.

The 2019 Scat Pack’s cabin is well-suited for grand touring but not overly luxurious.

“Being that this is a track-focused car, the real numbers are on the road course,” explained Jim Wilder, SRT vehicle development manager for the Challenger and Charger. “Versus a standard Scat Pack, the Widebody drops two seconds per lap on a two-mile road course. On that same course, this car now runs door to door with a narrow-body Hellcat.” Considering the Scat Pack’s 232-horsepower deficit to the Hellcat, that’s saying something.

Though its sheer girth will keep the Challenger a step or two behind the Ford Mustang GT Performance Pack 2 and Chevrolet Camaro SS 1LE, it’s worth noting that the Challenger’s prioritization of visual presence, grand touring prowess, and overall usability really puts this car in the crosshairs of a different type of buyer – one that’s more likely to cross-shop the Challenger with its four-door stablemate, the Charger, than with the substantially smaller pony cars from Ford and Chevy.

The 2019 Dodge Challenger R/T Scat Pack starts at $38,995. Adding the Widebody package, which includes six-piston Brembo brakes up front, a specially-tuned three-mode adaptive suspension, wider wheels and tires, and the bulging bodywork, adds another $6,000 to the equation. Stacked with options, our well-equipped tester rang up $55,569 with destination.

While the interior is largely a carry-over from last year, there are a few new touches here and there, like the dark dub plate finish on the instrument panel and console, and new liquid titanium accents on the shifter, cluster bezels, and steering wheel. As in years past, the Scat Pack Bee logo is embroidered on the front seats, giving the model a bit of unique flair to help the cabin stand out among the rest of the Challenger lineup.

2019 Scat Pack models also score a number of features that were formerly reserved for the SRT models as standard, like launch control, line lock, and the SRT Performance Pages, the latter of which provides real-time telemetry data like lateral G load, reaction times, braking distance, and other performance statistics.

As with the rest of the Challenger lineup post-2015, the Scat Pack’s cabin is well-suited for grand touring but not overly luxurious, and the seats strike a good balance between comfort and keeping occupants stationary during high-speed maneuvering. They’re not as aggressively bolstered as, say, the Recaro buckets you can option on a new Mustang GT, but they allow for a number of features that the Recaro seats do not, like power adjustability, ventilation, and lumbar support.

Lateral grip jumps from .93g to .97g, a number that would have been considered supercar territory just a decade ago.

FCA’s venerable Uconnect system handles the infotainment proceedings. The hardware received a substantial upgrade in 2017, but in the years since the changes have been largely software-based. Uconnect offers a fairly robust feature set, the 8.4-inch touchscreen display looks sharp, and the system has enough grunt to move between functions with little lag to speak of, but we’d love to see the 2019 Ram 1500’s 12-inch Uconnect display become optional in the Challenger lineup soon.

Merging the R/T Scat Pack with the Widebody treatment creates an interesting combination. Under the hood, you have FCA’s naturally aspirated 6.4-liter Hemi V8, here dishing out 485 horsepower and 475 pound-feet of torque. Paired with the 305mm Pirelli P Zero rubber that comes as part of the Widebody package, it’s good for a zero-to-60-mph time of roughly four seconds when equipped with the eight-speed automatic. Expect the six-speed manual to be a few ticks behind.

The Widebody package isn’t just fender flares and a set of wider wheels and tires, though. Scat Pack models get a specially tuned version of the three-mode adaptive suspension system that uses stiffer front springs, retuned shock absorbers, and larger sway bars at both the front and rear.

SRT engineers tell us the suspension is calibrated to make the Scat Pack Widebody feel more tossable and easier to hammer on at the limit, in turn requiring less effort to keep the car under you when you’re going for broke out on the track. The Widebody package also brings big six-piston Brembo front brakes into the mix, and paired up with the Widebody rubber, 60-to-zero braking has dropped from 111 feet to 108. Lateral grip jumps from .93g to .97g, a number that would have been considered supercar territory just a decade ago.

While it’s still more GT than sports car, the Scat Pack Widebody proves that this big coupe can hold its own.

Out on the road, the stiffer front end is evident over low-speed bumps, but it’s far from objectionable. Set to street mode, the suspension still is happy to soak up imperfections in the pavement, but it does communicate more about what’s happening under the car than the other Challengers in the lineup that are outfitted with this adjustable suspension system.

It paid dividends out on the Club Motorsports road course, though. The 2.5-mile, 15-turn course in Tamworth, New Hampshire, is wide and features tons of elevation change, attributes that play to the Challenger’s strengths while de-emphasizing some of its shortcomings.

Weighing in at over 4,300 pounds with the automatic transmission and all the seats installed (the rear seat can be deleted, saving 49 pounds), the Scat Pack Widebody is no featherweight, but it’s still nearly 200 pounds lighter than a similarly equipped SRT Hellcat Redeye, and much of that weigh is situated over the front end of the car.

Though its speeds down the straights can’t compare with that supercharged Demon spawn, the Scat Pack can brake later, turn in with more urgency, and is more forgiving at the limit. In the Hellcat, you’re often steering with the throttle to keep the car pointed where you want it – which is certainly a good time in its own right. But with the Scat Pack Widebody the whole operation feels more precise, and less effort is spent making corrections at speed.

The price of the Challenger R/T Scat Pack climbs rapidly as you start checking off boxes on the options sheet, as evidenced by our tester’s price tag of over $55K. But there’s also plenty of room to trim some fat.

At $6,000 the Widebody package adds a substantial chunk to the Scat Pack’s bottom line, but you also get a lot for your money so we’d consider it essential. Ditch the automatic transmission for the six-speed manual and you’ll put $1,595 back in your pocket, which we’d recommend spending on the killer 18-speaker Harmon Kardon premium audio system ($1,595). The Uconnect infotainment system is also worth the price of admission ($795), as are the optional Pirelli P Zero summer tires ($595).

There are a number of other comfort and convenience packages available as well, but whether or not you need equipment like a power-adjustable steering column, blind spot monitoring and adaptive cruise control really comes down to where your priorities are. That said, you should be able to spec out a nicely appointed Scat Pack Widebody for under $50K without sacrificing much.

For those that admire the Challenger’s retro style and Hemi roar but have pined for a sharper instrument, look no further. While it’s still more GT than sports car, the Scat Pack Widebody proves that this big coupe can hold its own when given the right tools to work with. And, perhaps more importantly, the Scat Pack Widebody gives up very little in terms of everyday drivability to get there.