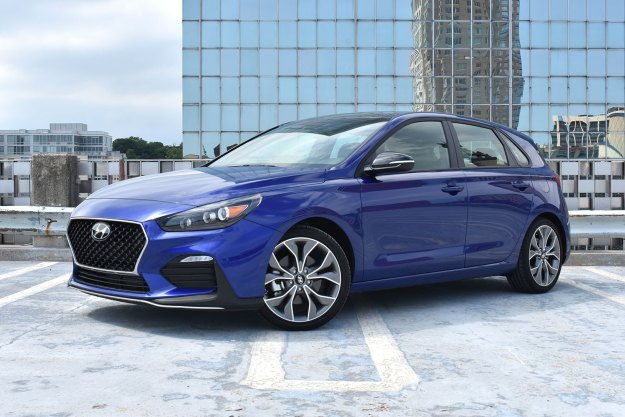 “The 2019 Hyundai Elantra GT N-Line ticks all of the boxes and adds a bonus dose of fun.”

With so many crossovers and SUVs on the market, buyers have a lot of choice beyond conventional road-hugging cars. Whither the humble hatchback? Hyundai hasn’t given up on it yet. The Korean automaker has five crossovers in its lineup already – with the 2020 Venue still on the way – but it also found room to squeeze the 2019 Elantra GT N-Line in as well.

N is Hyundai’s new performance sub-brand and full N models are supposed to be up-market sports versions of existing models. Only the Veloster gets the full-fat N treatment in the United States, and not simply an N-Line trim package. The N-Line trim on this car is actually a step down, adding sportier styling elements and small mechanical tweaks, but no major performance upgrades.

The Elantra GT is a hatchback based on the current-generation Elantra sedan, although the two cars have very different exterior styling. The N-Line replaces the Sport at the top of the Elantra GT lineup for 2019. Our test car carried a base price of $25,285, which included the optional seven-speed dual-clutch transmission (a six-speed manual is standard) and a mandatory destination charge.

The Elantra GT competes against cars like the Honda Civic, Toyota Corolla, and Subaru Impreza for an ever-shrinking piece of the hatchback pie. The Hyundai needed to stand out from that crowd, but also make the case for the idea of the hatchback itself.

Most vehicles that appear to be SUVs are actually cars playing dress up. They’re crossovers that use car platforms, but with the taller, more rugged bodywork of traditional SUVs. That means in addition to making crossovers look good, designers have to make them look like something they’re not. The Elantra GT, on the other hand, looks exactly like what it is.

The Elantra GT isn’t a radical design like the Hyundai Kona. It’s just a well-executed one. The car has remarkably good proportions for a front-wheel drive vehicle, and Hyundai’s designers didn’t fall into the trap of adding excessive detailing to try to jazz things up, something that can’t be said of their counterparts at Honda and Toyota. The N-Line trim level adds some model-specific styling features, including a silver-trimmed grille, front spoiler, and 18-inch wheels, but the car doesn’t descend into boy racer territory.

The interior has the same honesty as the exterior. Our N-Line test car had leather upholstery with red contrast stitching, a leather-wrapped steering wheel, and aluminum pedals, but the Elantra GT is still very much an economy car. Most of the interior was trimmed in simple black plastic, but everything seemed very well put together, which is all you can ask for in a car in this segment.

We were also impressed by the interior ergonomics. The N-Line gets model-specific front sport seats (heated and ventilated on our tester) that add a little extra bolstering, helping to hold the driver and front passenger in place during cornering. But they were also very comfortable while driving in a straight line on a long highway cruise. Unlike many current small front-wheel drive cars, the Elantra GT’s dashboard is fairly close to the windshield, giving the driver a better forward view and using interior space more efficiently. Hyundai also provided two different sizes of cupholder on the center console, so smaller drinks don’t get dislodged. Additional cupholders in the doors mean it’s still okay to order more than one large soda.

The infotainment system was easy to use, with sensibly designed menus.

Perched atop the dashboard, the 8.0-inch infotainment screen is within easy reach of the driver’s fingers. The Elantra GT comes standard with Apple CarPlay and Android Auto. Navigation and wireless phone charging are optional extras. As with other recent Hyundai models, we found the infotainment system easy to use, with sensibly designed menus and bold graphics that were easy to read at a glance.

When it comes to interior space, the Elantra GT is fairly competitive with other compact hatchbacks. It’s close to the top of the segment in cargo volume, although low height of the cargo floor can make removing items awkward. The Elantra GT felt like a right-size vehicle, offering more cargo capacity and overall passenger space than the Hyundai Kona, but in a more compact package than the Hyundai Tucson.

The Elantra GT N-Line proves that ordinary cars can be fun to drive. It’s not as crazy as the Hyundai Veloster N or other similar hot hatchbacks, but ensures twisty roads won’t go to waste.

Under the hood, the N-Line gets a more powerful engine than the base Elantra GT. Previously used in the discontinued Elantra GT Sport model, the 1.6-liter turbocharged four-cylinder engine makes 201 horsepower and 195 pound-feet of torque, which is a healthy amount for a car of this size. The car felt decently quick, with only a hint of turbo lag. A louder exhaust system to complete the experience would have been nice, though.

Power is sent to the front wheels through a six-speed manual transmission, or the seven-speed dual-clutch automatic transmission in our test car. Hyundai’s choice of a dual-clutch gearbox instead of a conventional torque-converter automatic or continuously variable transmission (CVT) allows for quicker shifts, giving the Elantra GT a sportier feel. The tradeoff with a dual-clutch transmission is usually a lack of refinement, especially in stop-and-go traffic where the lack of a torque converter can lead to jerky shifts. But we didn’t have any issues with our test car, so there didn’t seem to be much of a compromise to make. Well done Hyundai.

Hyundai also made some small chassis tweaks for the N-Line. Compared to the base Elantra GT, the N-Line has stiffer engine and transmission mounts, bigger brake rotors, re-tuned steering, and re-tuned suspension with stiffer springs. We didn’t have a base Elantra GT to compare with, but in isolation the N-Line model felt pretty good. The steering was precise, and the car was eager to turn into corners, with no hint of the understeer that often plagues front-wheel drive cars. Now we can see why Hyundai turned this car (which is sold as the i30 overseas) into a race car. Hyundai also sells an i30 N model in other markets, marrying the Veloster N powertrain with the Elantra GT body.

The Elantra GT isn’t a radical design like the Hyundai Kona. It’s just a well executed one.

The stiffer suspension does have a negative impact on ride quality, but we found it bearable even after many miles of highway driving. The cabin was also fairly quiet for an economy car, so we imagine the Elantra GT would be a good choice for commuting.

Cars like the Honda Civic, Mazda 3, and Volkswagen Golf are fun too. But the Elantra GT N-Line still stands out. As with all hatchbacks and sedans, the Elantra’s low center of gravity and lower curb weight make it inherently better at canyon carving than the average crossover. Our time with the dual-clutch N-Line left us curious to drive the manual-transmission model, which also gets grippier summer tires. We think that could be a very fun daily driver.

The Elantra GT N-Line is completely lacking in standard driver-assist tech. Hyundai offers adaptive cruise control, lane keep assist, forward collision warning, and a driver-attention monitor, but only as part of an optional technology package. Both the Honda Civic and Toyota Corolla hatchbacks offer adaptive cruise control and lane keep assist as standard equipment, while the Mazda 3 hatchback gets those features as well as a driver-attention monitor as standard.

The 2019 Hyundai Elantra GT was named a Top Safety Pick by the Insurance Institute for Highway Safety (IIHS), falling short of the higher Top Safety Pick+ rating thanks to underperforming headlights and child-seat anchors. The hatchback also received a four-star overall rating from the National Highway Traffic Safety Administration (NHTSA). The federal safety agency noted an increased likelihood of injury to rear-seat passengers based on results from one of three side crash tests, which kept the Hyundai from achieving a perfect score.

Hyundai offers a 10-year, 100,000-mile, powertrain warranty and five-year, 60,000-mile, limited warranty, which remains among the best coverage in the business. The Elantra received an above average reliability score from Consumer Reports (the magazine doesn’t publish separate results for the sedan and GT hatchback) for the 2018 model year – the most recent with available data. As a brand, Hyundai scored well in the most recent J.D. Power Initial Quality Study.

While we do think the six-speed manual transmission and summer tires would take the Elantra GT N-Line to the next level, we didn’t get to drive a car in that configuration, and thus can’t make a firm recommendation. We would definitely take an N-Line over a base Elantra GT, though. The more powerful engine, sportier transmissions, and chassis upgrades seemed worth the roughly $4,000 price difference between a base Elantra GT and our N-Line test car.

On paper, the 2019 Hyundai Elantra GT N-Line doesn’t look like a winner. Other compact hatchbacks go farther with exterior styling, tech, and gas mileage, and even with 201 hp, the N-Line can’t match full-bore hot hatchbacks like the Volkswagen Golf GTI. Both the Mazda 3 and the Subaru Impreza offer all-wheel drive for bad weather. Yet the Elantra GT N-Line rises above its specs to deliver a satisfying driving experience in a usable package. It’s a reminder of just how good regular cars can be, and why a hatchback is still a great alternative to a crossover. Hyundai didn’t have to resort to styling gimmicks or an overcomplicated infotainment system to make that happen, either. The Elantra GT’s introverted personality means many buyers may pass it by, but savvy shoppers shouldn’t.

Yes. Unless you live somewhere with bad winters and must have all-wheel drive, this is all the car you’ll need.