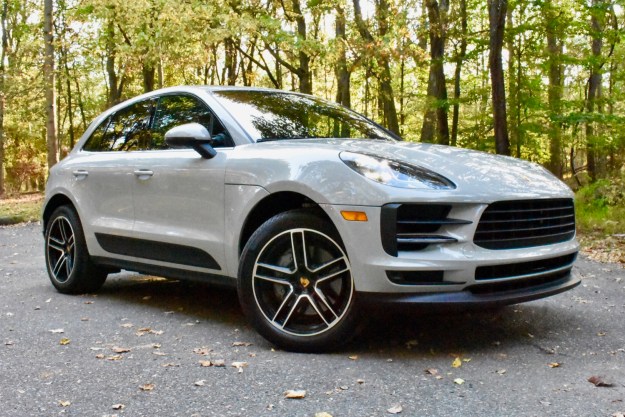 “The 2019 Porsche Macan S has the performance you want and the usability you need.”

Cars are changing. They’re not just getting electrified and autonomous, they’re also getting taller and fatter. SUVs are subsuming traditional sedans and coupes – even when it comes to performance vehicles. The times they are a-changing.

Porsche in particular has led this charge. When the German automaker launched its Cayenne in 2003, the idea of a fast SUV was a novelty, but now they’re a dime-a-dozen. Today, the smaller Macan is Porsche’s bestselling model. It not only has to show that there can still be life after SUVs, but prove that it’s still worth getting a Porsche instead of a small, fast SUV from fellow German automakers Audi, BMW, or Mercedes-Benz.

We spent a few days with a 2019 Porsche Macan S, the middle child of the Macan lineup. With a mandatory destination charge included, the S has a base price of $60,750 – an $8,500 premium over a base Macan. Our test car also had plenty of optional extras, including adaptive air suspension ($2,750), the Sport Chrono package ($1,360), a red and black two-tone leather interior ($3,880), and Chalk exterior paint ($3,120), adding over $20,000 to the price. That illustrates lesson one of buying a Porsche – be careful when ticking option boxes.

Porsche is known for its sports cars, so it made sense for designers to pen something other than the stereotypical SUV box. The low roofline, curved rear end, and that gaping maw of a grille let you know that this is no ordinary SUV. While the Macan competes against small luxury SUVs like the BMW X3 and Mercedes-Benz GLC, the styling is closer to the “coupe” versions of both those models.

That sleek exterior styling comes at a price, though. Porsche did not have a full set of interior measurements available, but cargo space trails the X3 and GLC, as well as most other vehicles in this segment. The interior felt fairly roomy, although taller backseat passengers may wish for a bit more legroom. Porsche is miles ahead of the competition when it comes to interior design, at any rate.

The Macan’s interior not only feels properly luxurious, but also has character.

Like the larger Cayenne, the Macan’s dashboard is designed to resemble a Porsche 911. Instead of the usual pushbutton, you start the Macan by twisting a fake key to the left of the steering wheel. The instrument cluster has a centered tachometer, flanked by a speedometer and a reconfigurable display that can show everything from the current radio station to the all-wheel drive system’s front/rear torque split.

The leather wrapped and metal trimmed steering wheel in our test car was just the right size and looked incredible. So did everything else, for that matter. Of all the things you pay a premium for in luxury cars, a high-quality interior is what you’ll likely notice most. The Macan’s interior not only feels properly luxurious (granted, our test car’s optional leather package probably helped with that), but also has character. You know you’re in a Porsche.

The Macan S has a 10.9-inch central touchscreen, but most vital functions, such as climate control and vehicle settings, can be controlled using an array of buttons and switches clustered around the shifter. Porsche also included an all-important volume knob, as well as a tuning knob that allows you to scroll through SiriusXM channels – a simple feature we’re surprised other automakers haven’t adopted. The screen itself is easy to use, with a vertical menu on the left side that provides one-touch access to important functions, such navigation and phone paring, without having to hit the “home” button.

Porsche doesn’t offer much in the way of standard driver-assist tech.

Porsche only offers Apple CarPlay at the moment, and it isn’t standard equipment. The automaker had previously told Digital Trends that Android Auto will be added in the near future – looks like 2019 models are not near enough. Porsche didn’t offer it from the get go because, initially, product planners didn’t feel there was enough demand.

Our test car also had the optional Bose surround sound system, with 12 speakers and 555 watts of power. Sound quality was good, although it took a bit of fiddling to get the best sound. Porsche also offers a more expensive, 821-watt, Burmester system.

As the builder of legendary sports cars like the 911, and with decades of success in racing, performance is what sets Porsche apart from other brands. It may spend most of its time hauling groceries and idling contently in the Starbuck’s drive-thru, but to be a true Porsche, the Macan needed to have the right moves.

2019 Porsche Macan S models like our test car are powered by a 3.0-liter turbocharged V6. The engine, which is shared with the Cayenne and Panamera, makes 348 horsepower and 352 pound-feet of torque. The single turbocharger is housed in the valley between the two cylinder banks, shortening the path gases have to take in and out, helping to improve responsiveness. The Macan S is only available with a seven-speed PDK dual-clutch transmission and all-wheel drive and the all-wheel drive system prefers to send more power to the rear axle to improve handling.

Whether it’s blasting down a highway or tackling some corners, the Macan never breaks a sweat.

Zero to 60 mph takes 5.1 seconds, or 4.9 seconds with the optional Sport Chrono package, according to Porsche. Top speed is 157 mph. That makes a Sport Chrono-equipped Macan S slightly quicker than an Audi SQ5, which the Porsche shares a basic platform with. A Mercedes-AMG GLC43 is quicker than the Porsche (zero to 60 mph in 4.7 seconds), but its top speed is electronically limited to 130 mph. BMW claims its X3 M40i will do zero to 60 mph in 4.6 seconds, with a top speed of 155 mph. BMW and Mercedes also offer more powerful versions of their SUVs, in the form of the X3 M and AMG GLC63, respectively, but so does Porsche. The 2020 Macan Turbo will boast 434 hp, and will do zero to 60 mph in 4.1 seconds with the Sport Chrono package.

The Macan S isn’t just about numbers, though. The Sport Chrono package includes Sport Response, a button on the steering wheel that recalibrates the engine and transmission for maximum thrust. Pushing it gives you 20 seconds of quicker acceleration, like a real-life version of F-Zero. The effect isn’t as ferocious as in the Cayenne E-Hybrid, as the Macan lacks that model’s instant electric torque. But you’ll never have to think twice about overtaking people on the highway.

Whether it’s blasting down a highway or tackling some corners, the Macan never breaks a sweat. In fact, the car almost feels a little too laid back. It doesn’t really come alive until you really push it. Once you do, you’re rewarded with confidence-inspiring grip and nimble handling that makes you forget you’re in an SUV. But at saner speeds the Macan just doesn’t feel that special. Part of that may be down to the quiet exhaust system on our test car, which didn’t have the optional sport exhaust system. Regardless, we were hoping for a bit more personality to go with the Macan’s ruthless competence.

Our test car also had adaptive air suspension, which may just be the Macan’s best feature. It gives the Macan its aforementioned agility, but without sacrificing ride quality. The Macan floats over road imperfections like a true luxury car, yet feels taught and precise while cornering. That’s the real advantage of having a vehicle like this instead of a traditional sports car or sports sedan: it transforms back into a normal car when you’re done playing.

The Environmental Protection Agency rates the 2019 Porsche Macan S at 20 mpg combined (18 mpg city, 23 mpg highway), which isn’t very good for a vehicle of this size. However, the ratings are pretty close to the Audi SQ5 and Mercedes-AMG GLC43. The BMW X3 M40i does slightly better, at 23 mpg combined (20 mpg city, 27 mpg highway). As with all performance vehicles, keep in mind that aggressive driving will have a negative impact on gas mileage.

Porsche doesn’t offer much in the way of standard driver-assist tech. Common features such as lane keep assist and adaptive cruise control, which are standard on some cheaper cars, are optional extras here. Granted, that’s the case with most other luxury vehicles as well.

Porsche offers a four-year, 50,000-mile, warranty, with a 12-year corrosion warranty, as well as complimentary servicing at dealerships. Porsche was one of the lowest-ranked brands in the most recent J.D. Power Initial Quality Study, and Porsche models have generally received low reliability scores from Consumer Reports. Crash-test ratings from the National Highway Traffic Safety Administration (NHTSA) and Insurance Institute for Highway Safety (IIHS) are not available at this time.

We loved our test car’s combination of Chalk (gray) exterior paint and Garnet (red) interior upholstery, but the paint color’s $3,120 cost would be too much to stomach. We would pair the leather interior a ($3,880) option with one of the cheaper paint colors instead. We could also keep the Premium Package Plus ($6,230), which adds Apple CarPlay, heated and ventilated front seats, Bose surround system, and a panoramic roof. The Sport Chrono package ($1,360) and adaptive air suspension ($2,750) round out our list of must-have features. These options fatten up the price, but they also make the Macan S stand out from run-of-the-mill SUVs.

Speaking of other SUVs, is it really worth getting a Macan S instead of a fast version of an Audi, BMW, or Mercedes? You definitely get something more with the Macan S, but you won’t find that extra something in spec sheets. The interior and exterior design as well as the car’s poise on the road are what separate the Macan from what, at the end of the day, are souped up versions of more common family cars. The Macan itself may not offer as visceral an experience as a Porsche 911 or 718 Cayman, but it’s also a lot better at hauling people and stuff. Maybe the SUV apocalypse won’t be so bad after all.

Yes. The 2019 Porsche Macan S is an excellent combination of performance and luxury.