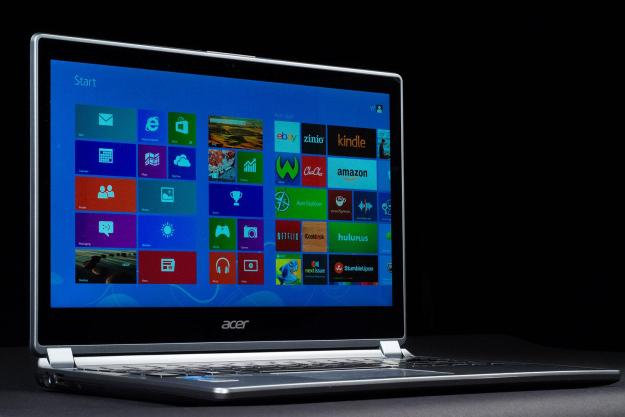 “The Acer Aspire V7’s strong performance and discrete graphics impress, but its extreme temperatures at load and so-so build quality make it difficult to recommend to buyers uninterested in gaming on the go.”

In early 2012, at an event to brief the press on its new Kepler GPU architecture, Nvidia handed out an unusual Ultrabook: the Acer Aspire M3. Equipped with the GT 640M, the M3 was the first Ultrabook to ever ship with a discrete graphics solution. Unfortunately the system had several flaws, but Acer fixed most of them in the Aspire Timeline Ultra M5, a powerful successors that sold for less than $800 and received our Editor’s Choice award.

Then, almost as suddenly as the laptops had appeared, they were gone. The Aspire M5 line continued, but models with discrete graphics were almost impossible to find, leaving consumers without an option if they wanted decent gaming performance from their Ultrabook – that is, until now.

If you’ve always yearned for an Ultrabook that can also play games, the Aspire V7 is what you’ve been waiting for.

Instead of re-introducing discrete graphics to the M-series, which admittedly ran rather hot at load, Acer placed the option in its new V-series Ultrabook. Base models come with Intel HD 4600 graphics, but expensive variants, like our V7-482PG review unit, have an Nvidia 700-series GPU; in our case, the beefy 750M.

This is the same part found in Alienware’s M14x, so it means business. As do the rest of the system’s specifications, which include a Core i7-4500U dual-core processor, 12GB of RAM, and a terabyte of storage.

While all of this sounds great, it predictably inflates the price tag. Base models start at $800, but our review unit’s as-tested price is $1,300, putting this Acer in league with many premium Ultrabooks. Is the Aspire V7’s power enough to separate it from the crowd?

A laptop by any other letter

We wouldn’t blame you for mistaking the V-series for the M-series at first glance. Both share numerous traits, including a plastic chassis with aluminum lid and interior, a glossy thin-bezel display, and a power button unusually located on the left flank. These traits have always served the less expensive Aspire M5 well, but they’re not as special on the more expensive V-series, which must compete with design stand-outs like the Apple MacBook Pro with Retina, the Dell XPS 13, and the Lenovo Yoga.

Build quality also suffers under the scrutiny of this system’s price. Though reasonably solid, the lid allows for significant flex, as does the keyboard. Panel gaps are somewhat large and extremely easy to see. These complaints take away from the Aspire V7’s quality and will leave some users wondering what they paid for.

Most connectivity is found on the rear, rather than the sides. Three USB ports are included, but only one is 3.0. HDMI, Ethernet, a card reader, and a combo headphone/microphone jack round out the options. The array of connections offered is average at best, and we think Acer should have sprung for at least two USB 3.0 ports.

Our problems with the Aspire V7’s design largely spill over to its keyboard which, once again, seems shared with the M-series. While the layout is spacious, keys lack travel and activate via a squishy, imprecise action that provides almost no tactile feel. As a result, touch typists may find this Ultrabook a bit difficult to use.

What the Aspire V7 lacks in elegance, it attempts to make up for with raw power.

Backlighting is standard and activated via a keyboard hotkey. Brightness adjustments aren’t available, which is a shame, because the default setting feels a bit too bright for use in a pitch-black room. There are also light-leak issues, which make the backlight LEDs directly visible at certain angles.

Touchpad quality falls short even of the mediocre keyboard. Though once again spacious, the surface offers no texture and the integrated left/right mouse buttons activate with a hollow, cheap click. Multi-touch gestures usually work well but are occasionally unresponsive, an issue that rears its head with frustrating inconsistency.

A great display for media and games

The Aspire V7 ships with a glossy 1080p touchscreen that nearly aced our tests. The panel can render 97 percent of the sRGB gamut, offers a contrast ratio of 700:1 at maximum brightness, and has good black depth. In short, it’s a beauty, even by the high standards of modern Ultrabooks. Games and movies are reproduced with good shadow detail, vibrant colors and clean, bright whites.

Glare is our only complaint. While the backlight is brighter than average, it’s not enough to overcome the extremely reflective screen. Using the laptop in a sunlit room is difficult even with closed blinds, and use outdoors (or near a window) is almost impossible.

Media content sounds as good as it looks. The speakers are very loud at maximum volume, and while some distortion occurs alongside deep base, audio is usually clear. At 75 percent volume, the speakers remain loud enough to fill a small room and most distortion disappears.

Weighing in at 4.3 pounds, and with a chassis just over 21mm think, the 14-inch Acer Aspire V7 pushes the boundaries of what can be considered an Ultrabook. An average laptop bag will easily carry the system, but buyers who want extreme portability should look elsewhere.

Like most systems boasting a 4th-gen processor, this Acer provides strong battery life, though it does come in slightly short of its peers. Our light-load Reader’s Test reported 7 hours and 16 minutes of endurance, while the Peacekeeper Web browsing benchmark drained a full charge in just over 5 hours. These results fall short of the average for 4th-gen Ultrabooks.

Power consumption is just over 16 watts at idle (with display at maximum brightness) and reaches as high as 72 watts at full load. These results, and in the load number in particular, are very high for an Ultrabook.

What the Aspire V7 lacks in elegance, it attempts to make up for with raw power. Our review unit arrived with a Core i7-4500U processor, the most powerful 4th-gen Intel Core we’ve tested, and it didn’t disappoint. SiSoft Sandra’s Processor Arithmetic test turned in a score of 45.35 GOPs, and 7-Zip came to a result of 8,114 MIPs. Both numbers are about 20 percent better than an average Ultrabook.

External temperatures are usually not so severe that they take from a review score, but the Aspire V7’s record-setting heat is the exception.

General system performance also impressed with PCMark 7 turning in a solid score of 4,528 in spite of its massive 1TB mechanical hard drive. Some credit goes to the 24GB solid-state cache drive, but equal praise should be heaped on the CPU and GPU, both of which performed very well.

Gamers will be pleased to know 3DMark posted a Cloud Gate score of 6,296 and a Fire Strike score of 1,414. Both numbers are double what a Haswell laptop with HD 4600 integrated graphics can boast, and these scores even exceed an Asus M Series desktop we reviewed with Nvidia’s GT 640 graphics card.

To see how the laptop performs in real games, we loaded The Elder Scrolls V: Skyrim, which ran at 30 FPS with detail set to high and at an average of 46 FPS with detail set to medium. Civilization V, a game that places significant load on both CPU and GPU, played at 25 FPS with detail at absolute maximum. Lowering texture detail to medium and turning off High Detail Strategic View boosted FPS above thirty.

While these results seem so-so at first glance, they’re actually very strong. Ultrabooks with Intel HD 4600 deliver only 30 FPS in Skyrim with detail at medium and resolution set to 1,366 x 766, and most can’t handle modern games at 1080p resolution unless detail is set to low. Acer’s Aspire V7 at least makes high detail a playable option.

The hottest laptop ever?

Acer’s M-series was ridiculously warm at load when equipped with discrete graphics, in some cases reaching external temperatures of 117 degrees Fahrenheit. Now the company has managed to beat its own record with an astounding load temperature of 126 degrees recorded from near the center of the Aspire V7’s bottom. This beats the previous record holder, Lenovo’s ThinkPad Edge Twist, by 7 degrees Fahrenheit.

Needless to say, this system isn’t going to be comfortable on your lap while gaming, and even idle temperatures peaked at a relatively high 94.5 degrees Fahrenheit.

Perhaps Acer should have set the fan to be more aggressive. Our decibel meter recorded a pleasant result of 40.3dB at idle, and that number jumped to just 46dB at load. While certainly noticeable, this Ultrabook is quieter than other thin laptops with discrete graphics, such as the Asus Zenbook UX51 and the Samsung Ativ Book 8.

The Acer Aspire V7 is all about power. In our performance tests it blows away most competitors by posting processor scores 20 percent higher than average and doubling the performance of Intel HD 4600 in 3D games. Only the Asus Zenbook UX51 and Razer Blade are quicker, but both start at $500 more, making this $1,300 system look like a steal. Acer even sweetens the deal with a wonderful 1080p display and a decent pair of speakers.

Unfortunately there are a few problems, too. Build quality is not at all what consumers expect from an expensive PC, the touchpad is terrible, and battery life is a bit below average for a 4th-gen Ultrabook. Then there’s the heat. External temperatures are usually not so severe that they take from a review score, but the Aspire V7’s record-setting heat is the exception. Buyers who use their laptop as just that will find this to be a very uncomfortable computer.

The biggest problem, however, is Samsung’s Ativ Book 8. That slightly larger laptop offers even better performance at a lower price and, despite its 3rd-gen Intel processor, it almost matches the V7’s battery life. While the smaller Acer looks portable on paper, it’s more at home on a desk than on the road, which makes the Ativ Book 8 an intimidating competitor.

Still, users who want a unique blend of portability and performance should give the Aspire V7 a shot. If you’ve always yearned for an Ultrabook that can also play games, the Aspire V7 is what you’ve been waiting for.