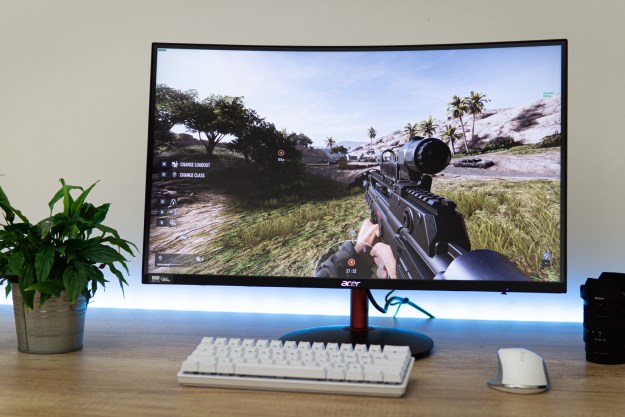 I’m someone who normally dabbles in the high-end segment, and Acer caught my attention when it announced a 27-inch curved gaming monitor with a 165Hz refresh rate. Not because of its spec sheet, but because of its price: With an MSRP of $330 but often retailing around the $300 mark, might the Nitro XZ272U be worthy of our best gaming monitors list?

That’s not a lot of money in the world of gaming monitors, and while it isn’t exactly pocket change either, Acer’s numbers promise a solid gaming experience, so we’re going to find out how well it delivers.

With specs like these at this price, there’s always a catch. But with this Nitro gaming monitor, there’s nothing here that constitutes being a deal-breaker — as long as you know what you’re signing up for.

Starting with the monitor’s design, you’ll be pleasantly surprised when unboxing the Acer XZ272U. The monitor isn’t heavy and clearly built to a cheaper standard, but Acer scores a heap of brownie points with the display’s stand.

It features a simple round swiveling base, onto which you secure a red, anodized aluminum neck that has height and tilt adjustments, giving you a complete range of motion.

From the rear of the monitor has a few red accents, but from the front there are no tacky design elements, other than the subtle red accenting on the stand. If you ask me, this is among the better-looking gaming monitors you can buy at this budget, and it won’t look out of place even at the family computer.

The curve is rated at 1500R, and that’s what it looks like: It’s subtle, but helps immerse you a little more in-game without overdoing it to the point of being only good for gaming.

If you’re planning to use it for both gaming and work, this is a great dual-purpose monitor.

If you need a display with tons of connectivity, Acer’s XZ272U does not have your back covered the way Dell’s 27-inch USB-C monitor does, though you probably already saw that coming. You’ll want to use the monitor’s DisplayPort input, but it also comes with two HDMI inputs, a headphone out jack, and a power connector — and that’s it. There is no USB-C to be found here, nor a USB hub or any other fancy goodies, but they can’t be expected at this price anyway.

The OSD is also eerily simple, but it offers everything you need. Operating it is done via a directional hub at the bottom right corner of the display, which first brings up a quick menu with brightness, input, and color modes. Go to the full menu, and you’ll find a section titled “Picture” where you can adjust brightness, contrast, HDR, and sharpness settings, and in the Color sub-menu you’ll find more precise adjustments to get your colors right, which includes gamma and temperature controls.

There is also a Game submenu where you can enable FreeSync, set the overdrive mode, bring up a refresh rate counter, and enable a virtual aim point.

One thing to note about the OSD is that it can be quite slow to respond to inputs, and the directional nub isn’t particularly inviting to use. It’s wobbly, smudgy, and offers at best buttery feedback when going through the motions. But, you’re unlikely to spend a lot of time in the OSD, so chances are that this doesn’t really matter anyway.

Acer equipped the XZ272U with a QHD VA panel, which means it has a 2560 x 1440 resolution. Thanks to the VA technology, the static contrast ratio is quoted as 3000:1. Acer doesn’t quote any figures for color coverage, so let’s see how the display fares in our testing.

Our sample achieved 95% coverage of the standard sRGB space, and 72% of AdobeRGB. These aren’t spectacular numbers, but if you’re just gaming chances are it doesn’t matter to you anyway. Naturally, you’ll want to look elsewhere if you want a monitor that is good for gaming and color-critical work, but then you’ll need a bigger budget, too. In terms of color accuracy, though, Acer appears to be doing something right as the XZ272U jotted down a Delta-E of 1.23. It might not have a wide color gamut, but what it can display, it reproduces accurately.

The XZ272U also didn’t meet its promised contrast figures, though few VA monitors ever reach the promised 3000:1. In that respect, the XZ272U actually fared quite well, achieving a contrast of 1870:1 at 100% brightness and 2000:1 at 75% brightness, which aren’t figures we get to note down very often.

However, the display doesn’t get very bright, with our highest brightness reading at 287.5 nits. Full brightness might be a bit let-down in brightly lit rooms, but if you’re gaming at night in a dark room I found the display most comfortable at 75% brightness, which so happens to be where it achieves the best contrast ratio.

After calibrating, I managed to squeeze one percent more AdobeRGB coverage out of the display, but accuracy was actually slightly worse with a Delta-E of 1.27 instead of 1.23, so it’s safe to say there’s little to gain from calibrating the XZ272U – at least in the case of our sample.

When it comes to HDR performance, the Acer XZ272U packs a DisplayHDR 400 certificate, which doesn’t really mean much. There is no form of local dimming, and as DisplayHDR 400 is the lowest level of certification, I’d look at it this way: The Acer XZ272U is capable of interpreting signals, but will not give you a true experience.

To sum up the panel, it doesn’t have the most splashing colors, but it’s sharp, has deep blacks, it’s consistent, and it’s surprisingly accurate at the colors it does display.

When it comes to gaming, Acer touts a 165Hz refresh rate and 4ms response times, which spells a solid gaming experience, but nothing earth-shattering. The standard for gaming displays nowadays is 144 Hz, so Acer jumps above that by a hair. However, we’re entering a time where 240 Hz displays are starting to pop up, and a handful of manufacturers also just revealed 360 Hz displays alongside the Nvidia RTX 3000 launch, though the vast majority of gamers won’t benefit from anything above 144Hz anyway.

My experience is reflected in that. The 165Hz refresh rate was a dream to game on, be it for slow-paced, single-player titles or twitchy multiplayer games like Destiny 2. The QHD resolution isn’t too demanding on your system, so if you have a recent graphics card or are okay with lowering the settings, achieving smooth framerates is very doable without having to spend huge money to achieve it. FreeSync works as it should without any stuttering, tearing, or flickering, the last of which can often happen on VA panel monitors.

The XZ272U doesn’t have a real G-Sync module, but it supports G-Sync over the Adaptive-Sync standard, so although it doesn’t show up (yet) on Nvidia’s list of supported G-Sync monitors, the technology works just fine.

But, as mentioned, this monitor has a VA panel, which is where we find a catch: VA smearing. As much as VA panels deliver vivid colors and deep blacks, smearing is a common phenomenon on VA monitors as they are sometimes slow to change color, and especially when transitioning from bright to dark colors, visible smearing occurs with fast-moving objects.

When you move your mouse across the screen on a dark background, for example, it leaves behind a short trail – or in games, when you turn around quickly, it presents itself as a sort of light motion blur. It’s a very smooth blur, because the refresh rate is high, but a blur nonetheless.

However, it’s not something you should immediately take at face-value and pass on this monitor. The smearing is minimal, and unless you’re very competitive in your games, it’s unlikely to bother you, if you notice it at all. You can see the effect in the blurbusters test above. The top alien moved at 165Hz, the middle one at half that, and the bottom one at half that again. Naturally, the top alien produced the smoothest image, but you can see the light trailing and the image certainly wasn’t as sharp as that of the Samsung G7.

A monitor like Samsung’s G7 (either in its 27-inch or 32-inch variant) will offer crisper moving images with less smearing, but you’ll have to more than double your budget to get your hands on one those, which just isn’t worth it for most people.

After all, the VA panel’s strength is in color reproduction and contrast ratio, and the deep blacks and somewhat vivid colors do make games very enjoyable.

If you’re looking for a gaming monitor that is likely to meet most of your needs, Acer’s XZ272U is seriously worth considering. It might not be the absolute fastest out there, but it’s fast enough for the vast majority of gamers, and at its $300 price tag, it’s easy to forgive the monitor’s shortcomings, which for the most part boil down to cheaper build quality, light visible smearing (if you can spot it at all), an unimpressive suite of ports and a slow user interface.

But you won’t spend much time in the interface anyway. With its 1500R curve the XZ272U is great for both gaming as well as office work, so if you need a dual-purpose monitor for gaming and writing papers, it’ll fit the bill perfectly.

Absolutely, the $300 gaming monitor segment isn’t lacking for competition. Gigabyte’s G27Q comes with an IPS panel with greater color coverage, but you’ll sacrifice the curve and deep blacks. For hardly any extra money you can get the same Acer monitor but in the 32-inch format for more immersion, or if you’re looking to spend a little less, you could contemplate Asus’ TUF Gaming VG27VH1B as it has a lower resolution and will therefore also be less demanding on your graphics card. Similarly, Acer also sells the 27-inch Predator Z1, which comes in at a similar price tag, but drops the resolution to Full HD and has a refresh rate of 144Hz. It’s also a 4-year-old model at this point.

Double your budget, and you can grab Samsung’s 1000R Curved G7, but that monitor, despite its unrivaled performance in games comes with shortcomings that might leave you feeling salty about having spent as much as it costs.

Overall, I feel like Acer’s XZ272U strikes a balance between price and performance that’s likely to please the greatest audience.

Unless you end up with a lemon, we expect Acer’s XZ272U to last as long as any monitor should nowadays: Five years at minimum, and Acer will protect your purchase for a warranty period of three years.

Yes. If you need a monitor for gaming and general office work, the Acer XZ272U is likely to keep you happy for years to come.

Topics
Here’s everything you need to build a great gaming PC in 2022
Sony’s first gaming monitor is under $1,000 and all-in on HDR
This strange controller changes the way you play PC games
This 500Hz monitor is the world’s fastest gaming display
Best gaming laptop deals: Save on Alienware, Asus and more
Best Alienware Deals: Save on gaming laptops, PCs and monitors
This huge password manager exploit may never get fixed
Best 17-inch Laptop Deals: Get a large laptop for $330
Apple Mac mini M2 buying guide: don’t make this mistake
Best Chromebook deals: Get a new laptop from $114
Tested: Is Discord really slowing down Nvidia GPUs?
Apple Reality Pro: everything we know about Apple’s VR headset
What MacBooks needs to learn from competitors about transparency