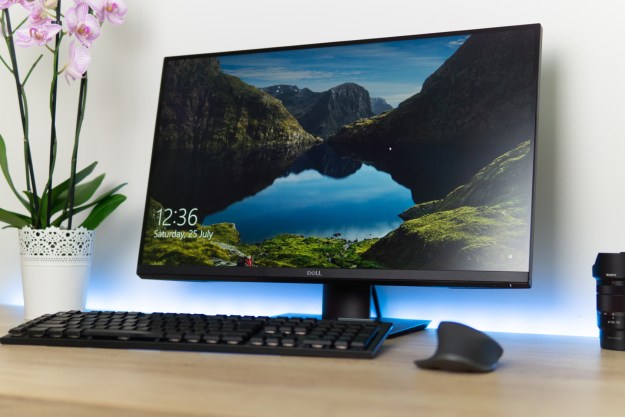 Being a monitor shopper can sometimes feel like being Goldilocks in front of three bowls of porridge. 1080p is dull, and 4K is too expensive. A 21-inch is too small to be worth it, and 32 inches is too big for your desk.

The Dell 27 USB-C monitor (model number P2720DC) monitor tries to be the happy medium. It’s a 1440p, 27-inch IPS display that wants to impress you with its balance more than its spec sheet. It won’t blow away professional photographers or gamers. Instead, it wants to be the monitor that will please the most people possible.

At $360 (down from its original price of $480), it does have something to prove though. Fortunately, it has a trick up its sleeve that keeps it competitive: USB-C docking with power-delivery and daisy-chaining. Is that enough to make this the monitor most people should buy?

Out of the box, you’re greeted with one of Dell’s excellent stands, which screws into the rectangular base from below. You then lower the monitor into place, tilting it forward to snap onto the stand.  From there, you have a monitor that has a whole range of adjustments, ranging from height, tilt, swiveling, and rotating to portrait so that it can be adjusted exactly how you see fit.

I can’t imagine an office where the Dell P2720DC would look out of place.

This full range of adjustments will be particularly valuable to people working from home to ensure their ergonomic needs are met to handle hours on end at their desks, as well as businesses that have to meet strict ergonomic guidelines for their workspaces.

Most displays have some form of tilting capabilities, and it’s expected in this price category to also have height adjustments — but Dell always goes the full mile and adds rotating to portrait too, unless the display is of a format so wide that it won’t be able to.

But it’s the design where Dell often stands out. The display looks highly professional, with incredibly clean, sleek looks all-around and I can’t imagine an office where it would look out of place.

Care has been put into the details too. Whereas older monitors had the cable management cutout in the neck too low, leading to visible cables, Dell’s latest displays have the hole higher up so that the cables are only visible when the display is in its highest position — a position you’ll rarely use it in.

If, however, you don’t find the P2720DC fashionable enough, perhaps the Dell Ultrathin D2719DC is up your alley, which has a sleeker profile.

When it comes to connectivity, Dell has gone the extra mile with its P2720DC. As previously mentioned, this display has USB-C docking, which is helpful in a number of situations.

The most notable of these is to connect laptops. The port supports 65 watts of power delivery capability, meaning it can send the video data from your laptop to the monitor, all while charging your laptop. This cable also handles data transfer between your laptop and the monitor’s internal USB hub.

However, that’s where I ran into one glaring omission. You would think based on looking at the frame that the P2720DC comes with built-in speakers – but it doesn’t. Dell is re-using the frame from other displays for the P2720DC, but it hasn’t built speakers into this one. Most of its competitors, such as Lenovo ThinkVision P27h-20, include speakers.

Of course, in a big office, you won’t get away with listening to music on loudspeakers, but they can be helpful for quickly showing a colleague a video without having to fumble some earplugs, or worse, find external speakers. It might please office managers, but the lack of built-in speakers feels like an inappropriate place to cut costs.

For that rare situation that you do need them, the P2720DC does allow you to use a connected laptop’s own built-in speakers.

When it comes to other connectivity, the display has one HDMI port and two DisplayPort connectors — one of those two DisplayPorts is an input, and the other an output for connecting a second monitor using the DisplayPort daisy-chaining feature, which also works with the USB-C connector.

The Dell P2720DC is best used with modern laptops.

I ran into one other omission: A USB-B connector for upstream data. To use the display’s internal USB hub, you have to use the USB-C connection. This makes the display somewhat unsuitable for use with desktops, as USB-C connectors aren’t exactly prevalent on desktops yet. Even if your desktop does have one, oftentimes you won’t be able to run display through it, which leads to yet another cable.

If you want to use the hub with an older PC, you’ll have to find yourself the right USB-A to USB-C cable too, as it isn’t included in the box.

Buttons for the OSD (on-screen display) are on the bottom right corner of the monitor. This position makes them a little less ergonomically-accessible than if they were on the side, but it helps with placing multiple displays next to each other, which many buyers might be doing with the daisy-chaining feature.

The OSD itself is easy to navigate and offers the basics needed to configure the display including brightness, contrast, and color options. It also has a handful of display modes including standard, movie, gaming, comfort, and more.

Although the P2720DC might not come with the greatest color reach or fancy factory calibrations, the eyes aren’t left wanting. According to Dell, its IPS panel is rated to offer 1.07 billion colors, along with extremely wide viewing angles, a 1000:1 contrast ratio, and a rated maximum brightness of 350 nits.

The resolution of 2,560 x 1,440 pixels is also the sweet spot at 27 inches, offering plenty of screen real estate and sharpness. It is possible to jump to 4K at this price, but may have to sacrifice the image quality provided by the IPS panel as well as some of this monitor’s niceties.

If you want to keep those features, you can easily look at needing to drop another $200 onto your budget for Dell’s 27-inch 4K UltraSharp monitor of 2020, the Dell U2720Q.

Dell has also coated the display with an excellent anti-glare layer, which is key in an office environment. I used the monitor in a room with a window shining straight at it and lights from all over the place, yet the image still looked vivid and I didn’t need the highest brightness setting. Of course, I wouldn’t recommend editing photos in this kind of environment, but the display was more than usable for office work, which is exactly the goal.

So, subjectively Dell has built a wonderful monitor to look at, but how does it perform when I throw our Datacolor Spyder X Elite onto it?

Long story short, surprisingly well. I measured a peak brightness of 395 nits which is even higher than the spec sheet promises, and the best contrast ratio also occurs at peak brightness with a maximum of 1,090:1. Color space coverage matches the spec sheet with 100% of the sRGB space but letting down in AdobeRGB at 78%. Color accuracy was achieved with an average Delta-E (difference from real) of 2.08, which isn’t bad for an uncalibrated monitor. It’s not as accurate as the Acer ConceptD CM2, but it’s no slouch.

Professional editors will likely want to jump to a 4K display with a wider color space.

With this in mind, calibrating the monitor ourselves didn’t yield huge changes. The brightness, contrast, and gamut remained identical except that I squeezed an extra percent more AdobeRGB gamut out of the display. I did manage to improve the color accuracy down to an average Delta-E of 1.3.

To put that into context, a professionally calibrated monitor will have a Delta-E of under 2, so after calibration, the P2720DC is technically accurate enough for professional editing work — but professional editors will likely want to jump to a 4K display with a wider color space to cover the AdobeRGB gamut.

However, for the people not willing to invest in a colorimeter, the pre-calibration results on the Dell P2720DC are good enough for small day-to-day edits of a non-professional caliber.

Dell’s P2720DC is a monitor that under-promises and over-delivers. If you’re a laptop user who needs one or more displays the P2720DC offers all the flexibility in connectivity you could ask for, and the single-cable docking feature offered through USB-C makes switching between home and go a breeze.

The lack of built-in speakers might put some people off, and the lack of a non-Type-C upstream USB port for the internal USB hub makes the display slightly impractical for use with desktops. The P2720DC makes up for it with professional looks and an IPS panel that delivers a pleasant and uniform image. The excellent anti-glare coating is just a cherry on top to make it great for use in well-lit office environments.

Dell is competing in a crowded space with the P2720DC, so there are certainly alternatives. A small handful include the ViewSonic VX2785-2K, the Lenovo ThinkVision P27h-20, and, if you don’t need USB-C, last year’s UltraSharp 27-inch QHD monitor from Dell, the U2719D which costs roughly the same but offers smaller bezels and a factory calibration.

HP also has a contender with nearly identical specs and pricing, the HP Z27n, though it only supports 15 watts of power delivery.

Dell covers the P2720DC with a 3-year advance exchange-service warranty, which means that they’ll deliver a new one to your office or home before picking the old one up — and in my experience, it’s very swift to do so too.

Outside of the warranty period, you shouldn’t need to worry either. The P2720DC comes with LED backlighting that typically isn’t prone to failure, and there aren’t any complexities that increase the chance of a fault, so the P2720DC should last at least as long as any monitor should: Five years.

Yes. If you’re on the lookout for a home office monitor with great picture quality and great laptop connectivity, the Dell P2720DC is for you.