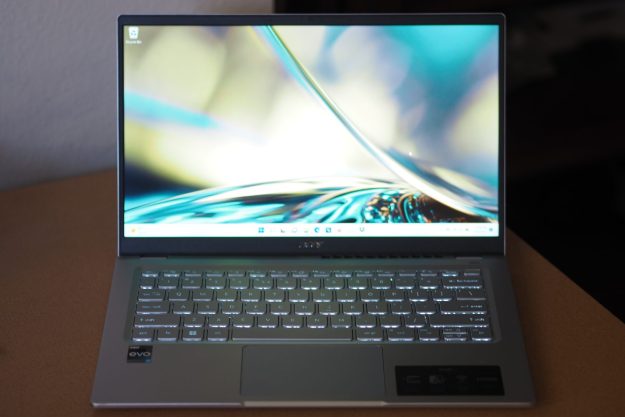 Acer’s Swift 3 is an interesting laptop. It’s offered some budget-level machines with tremendous value, such as the 2020 AMD Swift 3 that maintains a spot on our best budget laptops list. The line also features machines that better fit the midrange category, such as the new Swift 3 Evo SF314-512. This laptop is intended to compete with 14-inch laptops in the $850 to $1,000 range, a highly competitive space.

I reviewed the top-end configuration that comes in at $1,130 for a Core i7-1260P CPU and a 14-inch 16:9 QHD (2,560 x 1,440) IPS display. Besides the old-school aspect ratio, the Swift 3 lived up to its price point and would be a relative bargain at its starting price of $850. It offers strong performance and battery life that beats out much of its competition and even takes on more expensive , making the Swift 3 a solid value.

On paper, those are attractive prices. They’re competitive with other mi-range 14-inch like the Asus Vivobook S 14X and the Dell Inspiron 14 2-in-1, although the Asus benefits from its 120Hz OLED display.

Thanks to an all-aluminum chassis, the Swift 3 is reasonably solid. There’s a tiny bit of bending in the lid, but the keyboard deck resists flexing and the chassis bottom is rigid. The Swift 3 feels better built than much of its competition at this price point, like the Vivobook S 14X and the Inspiron 14 2-in-1, but it’s not quite in the same league as more expensive like the Dell XPS 15 and the Lenovo Yoga 9i Gen 7. The quality carries through to the hinge, which allows opening of the lid with one hand but holds the display firmly in place.

Unusually for a 14-inch laptop, the Swift 3 has a second user-accessible SSD slot. Add another SSD and you can either speed up the laptop or expand storage up to 2TB.

Aesthetically, the Swift 3 is a simply designed laptop without any bling and with streamlined angles. It’s available in three lid colors — silver, blue, and gold — and my review unit was all silver. It’s an attractive and minimalist laptop, much like so many others produced lately, including the Vivobook S 14X and the Inspiron 14 2-in-1. Only the plastic display bezels detract from an overall quality appearance. The HP Pavilion Plus 14 is an example of a competitive laptop with a more elegant aesthetic.

Because of the 16:9 aspect ratio, the Swift 3 is wider than with 16:10 displays, but not as deep. It’s a highly portable laptop that won’t take up too much space or weight in a backpack.

Connectivity is solid with two USB-C ports with Thunderbolt 4 support, two USB-A 3.2 Gen 1 ports, a full-size HDMI 2.0 port, and a 3.5mm audio jack. There’s no SD card reader, which is disappointing, but the inclusion of 4 at this price point is welcome.

The Core i7-1260P has been a strong performer in the we’ve reviewed, offering a significant uptick from Intel’s 11th-gen CPUs. A couple of have stood out, though, performing better than the chip’s average. I’ve listed two of them in the table below, and one of them is the Swift 3.

Along with the MSI Prestige 14, the Swift 3 did exceptionally well in our benchmark suite. It beat out the Lenovo ThinkPad x1 Yoga Gen 7 with a Core i7-1260P that performed closer to average. It was also as fast or faster than a couple of thin-and-light with the 45-watt 14-core/20-thread Core i7-12700H, specifically the HP Pavilion Plus 14 and Asus Vivobook S 14X. I tested the Swift 3’s balanced and performance modes and reported both results. The thermal management utility didn’t make as much difference in the Swift 3 as in some other .

The Swift 3 essentially tied the Prestige 14 in Geekbench 5, our Handbrake test that encodes a 420MB video as H.265, and Cinebench R23, and both were at the top of the list with the 45-watt chips competing most strongly in Cinebench. The Prestige 14 was faster in the PCMark 10 Complete benchmark, which is a strong indicator of productivity performance, with the Swift 3 coming in third behind the MSI and the Asus ZenBook S 13 OLED with an AMD Ryzen 7 6800U.

Overall, the Swift 3 is a faster performer. It’s quick enough for demanding productivity workflows, and it can also handle low-end creative tasks. It competes strongly against costing hundreds more.

The Swift 3 is limited to integrated Intel Iris Xe graphics, which means it’s not a serious gaming machine. But for what it is, the Swift 3 performed well, achieving a high score in 3DMark Time Spy and better-than-average frame rates in Fortnite at 1080p and epic graphics.

You won’t want to tackle modern 3D titles, but the Swift 3 should be fine for older games and some lighter esports titles.

The Swift 3’s biggest weakness is its old-school 16:9 display. Taller displays, either 16:10 or 3:2, have become increasingly popular, to the point where all but the least expensive budget are making the transition. My review unit enjoyed a high QHD (2,560 x 1,440) resolution, and it looked like a quality display as I was using it when writing this review, but its aspect ratio was disappointing nonetheless. Also missing was touch, but there’s a Full HD (1,920 x 1,080) touch display option.

According to my colorimeter, the display had average color width and accuracy for medium and premium , although more IPS displays are starting to show wider colors. A year ago, 98% sRGB and 75% AdobeRGB would have been a strong showing, but recent quality displays have AdobeRGB gamuts in the 80s. The Swift 3’s color accuracy is decent for entry-level creative work, with a Delta-E of 1.51. Discerning creators will find it limiting, however. The display was plenty bright, though, at 368 nits, well above our 300-nit standard, and it enjoyed a high contrast ratio of 1,330:1, providing deeper blacks than our 1,000:1 threshold for quality images.

Overall, this quality display will work well for productivity work, media consumption, and even the occasional photo-editing or graphic design project. As your primary work computer for creative work, though, you’ll probably want something with tighter calibration.

Two downward-firing speakers at the front bottom of the chassis provide the audio. The volume was just loud enough to fill my small home office, and the mids and highs were clear without distortion. There wasn’t any bass to speak of, though, so for music and action movies, you’ll want a pair of headphones.

The keyboard has silver keys with gray lettering that’s easy to read with the backlight turned off, but a little harder to read with the backlight turned on. The keycaps are nicely sized, though, and there’s plenty of key spacing. The switches are light and snappy with a responsive bottoming action. It’s not quite as good as the keyboards on Dell’s XPS or HP’s Spectre lines, but it’s just a small step behind. I found the keyboard comfortable for longer typing sessions while creating this review.

The touchpad uses what Acer calls OceanGlass, which is actually recycled plastic that’s meant to feel like glass. I found it a comfortable surface with reliable support for Windows 11 multitouch gestures, and the buttons were quiet and precise. The touchpad’s only problem is that it’s a bit small, mainly because there’s not as much room on the palm rest as there is with taller displays.

Hello passwordless login support is provided by a fingerprint reader embedded in the power button, the perfect location. It worked quickly and reliably during my testing.

Finally, the webcam is a Full HD model capable of capturing 1080p video at 60 frames per second (fps). Combined with Acer’s tools for cleaning up and brightening video, the webcam provided an excellent image for videoconferencing. It’s a webcam you’re more likely to expect in a more expensive laptop, and it’s great to see here.

The Swift 3 has a 56 watt-hour battery powering a fast CPU and a high-res display. That’s about average for the 14-inch we’ve reviewed lately, with the Lenovo Thinkpad X1 Yoga Gen 7 configured with 57 watt-hours, the Dell Inspiron 14 2-in-1 with 54 watt-hours, and the MSI Prestige 14 with 52 watt-hours. Usually, that results in less-than-average battery life, but the Swift 3 and ThinkPad X1 Yoga Gen 7 (with a low-power Full HD display) proved to be exceptions.

The Swift 3 hit eight hours in our web-browsing test that cycles through a handful of complex websites. That’s a solid score. The Acer hit 14 hours in our video test that loops through a local 1080p movie trailer, which is above average. And in the PCMark10 Applications test that’s the best indicator of productivity battery life, the Swift 3 managed 10 hours.

Those results indicate a laptop that will last a full working day running a typical productivity workflow. In our comparison group, only the ThinkPad X1 Yoga Gen 7 lasted longer, but it benefited from a low-power display. Against its primary competition, the Swift 3 was a leader.

The is a typical 14-inch midrange clamshell laptop in appearance, but it excels in a few crucial areas. First, it’s well-built. Second, its performance is class-leading, And third, its battery life is above average. That combines to create a laptop that should be on anyone’s shopping list.

The one negative is the 16:9 display. Not every laptop has transitioned to 16:10 or 3:2, but enough have that the Swift 3 stands out. One day soon, I won’t recommend a laptop with an old-school aspect ratio no matter its other qualities, but that day hasn’t come just yet.

The HP Pavilion Plus 14 is a strong competitor, coming in at $850 (on sale) for a machine with solid performance and a gorgeous 2.8K OLED display running at 90Hz. It can’t match the Swift 3’s battery life, however.

Lenovo’s Yoga 9i Gen 7 is a solid alternative if your wallet is a bit thicker. Its spectacular design, fantastic OLED display, and solid battery life are worth the extra money.

Finally, you opt for the new Apple MacBook Air M2. It’s more expensive at $1,200, with less at 8GB and storage at 256GB, but it will offer faster performance and much longer battery life. And its build quality is second to none.

The Swift 3 is built well enough to last for years of productive service, with components to match. The industry-standard one-year warranty is just OK at this price point.

Yes. The is fast and offers strong battery life, making it a good choice among a competitive field of 14-inch .

Topics
All of Samsung’s videos from today’s Galaxy Unpacked event
The Galaxy Book 3 Ultra is Samsung’s most powerful laptop ever
Samsung Galaxy Book 3 Ultra vs. MacBook Pro 16-inch
The first RTX 4080 laptops are much cheaper than we expected
Forget the MacBook Pro 16: Dell XPS 15 is $400 off right now
This popular HP laptop just got a big price cut — now $270
This 8K monitor has 3D tech that can be viewed from all angles
Microsoft continues its unabashed embrace of ChatGPT and AI
Don’t fall for this Mac Mini M1 deal — buy this instead
No, AMD CPUs and GPUs won’t get cheaper — the CEO reveals why
Best Gaming PC Deals: Save on RTX 3070, 3080, 3090 PCs
Don’t miss this Samsung Galaxy Book 3 Ultra pre-order deal
Experts fear ChatGPT will soon be used in devastating cyberattacks