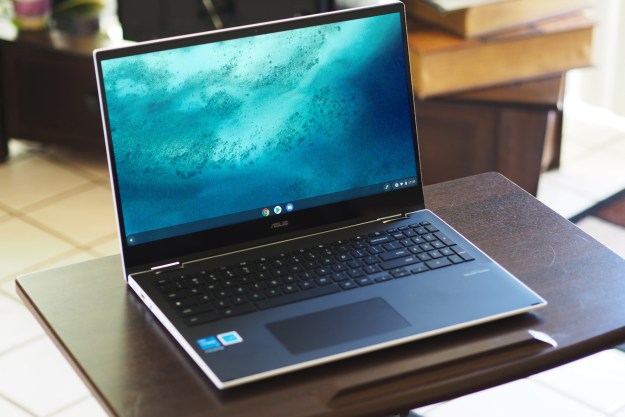 The Asus Chromebook Flip C436 was one of the best Chromebooks you could buy. It was stylish, premium, and supremely powerful — especially for a Chromebook.

Now, the Chromebook Flip C536 has superseded that machine, and there are some significant changes on hand.

The Asus Chromebook Flip C536 is a lovely white laptop with a black interior, a contrast that makes for a bold look that you don’t typically get at this price. The laptop’s lines are simple and streamlined and it has very typical angles, but the color scheme makes all the difference and there’s just enough chrome to provide accents without being gaudy.

Asus applied a couple of special coatings to the machine, using an electro-deposition process on the lid and bottom that creates a ceramic-like look and feel, and an in-roller process for the keyboard deck that produces a wonderfully soft and warm surface for your palms. It’s a bit like the Dell XPS 13 in this respect, which uses a carbon fiber material to achieve the same effect. The Asus Chromebook Flip C536 isn’t the most striking laptop, but you’ll feel like you’re carrying around a much more expensive product.

The build quality isn’t quite so top-notch, which isn’t typical for Asus. The company usually produces solid laptops as a rock, and it subjects all of them to military standards testing for robustness, but the Chromebook Flip C536 falls a little short. Mainly the problem is in the lid, which bends too much and causes some distortion on the display. There’s a tiny bit of keyboard flex, and the bottom chassis has just a little give.

Overall, it’s not bad for the price, but the Acer Chromebook Spin 713 is a Chromebook in the same price range that’s more solid. The Asus Chromebook Flip C436 that preceded this model was also more robust (and a bit more expensive), making this version a small step backward. I’ll note that the hinge on the Chromebook Flip C436 allowed opening the lid with one hand, while the Chromebook Flip C536’s version is a lot stiffer and requires two hands. It does move smoothly, though, through clamshell, tent, media, and tablet modes, and it incorporates the Asus ErgoLift function that props up the back for a better typing angle and improved airflow.

The Acer Chromebook Spin 713, with its 13.5-inch 3:2 display, is smaller yet. Part of the reason the C536 is heavier than the C436 is that it’s constructed of aluminum alloy versus the lighter magnesium alloy in the previous model. It also has a 57 watt-hour battery versus the 42 watt-hour battery in the older model. Frankly, it’s a bit surprising that the Chromebook Flip C536 gained so much weight and girth from one generation to the next.

Asus built solid connectivity into the Chromebook Flip C536. There’s a USB-C 3.2 port, a USB-A 3.2 port, and a 3.5mm audio jack on the left side, and another USB-C and USB-A port on the right, to go with a micro SD card reader. That’s an improvement over the previous model. Wireless connectivity is Wi-Fi 6 and Bluetooth 5.0.

My review unit was equipped with a Core i3-1115G4 (a Core i5-1135G7 is available), which should provide plenty of performance for Chrome OS. We can’t run our full battery of benchmarks on Chromebooks, but in the Android Geekbench 5 app, the Chromebook Spin C536 managed just 1,209 in the single-core portion and 2,849 multi-core. That’s not particularly strong even for Chromebooks that don’t typically do well here. It is, though, quite a bit faster than the Asus Chromebook Flip 436 with its Core i3-10110U that scored a paltry 938 and 1,653, respectively.

Even with that mediocre Geekbench 5 result, I found the Chromebook Flip C536 to be plenty speedy. I ran a variety of Android apps and kept numerous Chrome tabs open and never noticed a slowdown. The 8GB of RAM likely helped keep things moving along, and the PCIe SSD likely helped as well. You can configure the Chromebook Flip C536 with up to 16GB of and a 512GB SSD, but our review configuration will likely suffice for most Chrome OS users.

Gaming was fine on the laptop. The Core i3-1115G4 is limited to Intel UHD graphics and not the newer Intel Iris Xe, but it still plays Android games like Asphalt 9 without stuttering or dropping frames. It’s a large laptop to use in tablet mode, the most comfortable way to play games, but it performed well enough.

The Chromebook Flip C536 uses a 14-inch Full HD IPS display in the increasingly old-school 16:9 aspect ratio. Asus doesn’t provide any specifications for the display, and I can’t use my colorimeter with Chrome OS laptops. That limits the objective data I can provide.

Subjectively, though, I found the display to be bright enough for typical indoor lighting conditions. Contrast seemed good but not great, with a touch of grey that kept black text from truly popping in a white background. Colors were bright and natural, showing off photos and video with apparent accuracy as I compared it side-by-side with other laptops. Compared to some other Chromebooks, I’d rate the Chromebook Flip C536 as good but not great, with the Acer Chromebook Spin 713 and the Google Pixelbook Go offering more vibrant and enjoyable displays.

Even so, I enjoyed using the Asus display during my review. It’s not going to please creative types who crave wide and accurate colors, but for productivity, web browsing, and binging Netflix with the display flipped into media mode, it’s a display that exceeds its price.

The audio wasn’t quite as good. Volume was sufficient for system sounds and watching YouTube videos, which clear mids and highs. Bass was lacking, as usual, and there was a bit of distortion at maximum volume. You’ll want to pull out a pair of headphones for listening to music and binging Netflix.

One of the things that companies sometimes scrimp on when making an inexpensive laptop is the keyboard. I’ve seen some great budget machines torpedoed by a bad one, and suffice it to say, Asus has avoided that pitfall here. The keyboard on the Chromebook Flip C536 has good spacing, comfortable keycaps, and a crisp mechanism that provides plenty of travel and a clicky bottoming action.

I found the keyboard precise, comfortable, and quiet during my testing, and there’s even a diminutive numeric keypad if you enter a lot of data. You’ll find the usual wide range of Chrome OS keyboard backlighting, and it’s effective and consistent. I liked this keyboard better than any I’ve used on a Chromebook lately, including the Chromebook Flip C436 and the Chromebook Spin 713, and as much as most Windows 10 laptops.

The touchpad is in a wide format, which is unfortunate in that Asus could have fit a larger square touchpad given all the available palm rest space. It’s a decent size, but it could have been larger. Fortunately, it makes up for it with responsiveness and perfect control over the full suite of Chrome OS multitouch gestures. The display is touch-enabled, of course, there’s an optional active pen that you can purchase for inking. It supports 4,096 levels of pressure sensitivity and should provide a great experience for handwriting and drawing on the display.

Asus didn’t build in any way to log in without a password, which isn’t expected at this price point. It would have been nice to have a fingerprint reader, though.

The Chromebook Flip C536 has a larger battery than its predecessor, as outlined above 57 watt-hours versus 42 watt-hours. That should have resulted in a significant boost in battery life.

Unfortunately, that’s not how things turned out. Again, we’re limited in the testing we can do because of Chrome OS, but we have two tests that we can run. The first is our web browsing test that runs through a series of popular websites. The Chromebook Flip C536 managed just 6.75 hours, well under the 10.5 hours the C436 achieved. The Chromebook Spin 713 went for over 11 hours. In our video test that loops through a local Full HD Avengers trailer, the Chromebook Flip C536 hit a few minutes short of 10 hours, compared to the C436 at almost 13 hours and the Chromebook Spin 713 at almost exactly 10 hours.

These are disappointing results, and I ran each test twice to ensure I wasn’t missing something. Most Chromebooks will get you through a full day’s work thanks to the lightweight Chrome OS, and given the Chromebook Flip C536’s Full HD display, I expected at least that, if not more. Unfortunately, you’re unlikely to make it through an eight-hour day without plugging in at some point.

The Asus Chromebook Flip C536 is a great-looking Chromebook that offers good performance and great input options. It falls a little short of the typical Asus build quality, but it’s not a fragile machine by any means. Battery life, though, is a real buzzkill, setting this laptop back considerably.

The Acer Chromebook Spin 713 is a strong competitor, coming in at around the same price but offering a faster CPU and a sharper, more productivity-friendly 13.5-inch 3:2 display. It’s also quite a bit smaller, making it more functional in tablet mode.

The Asus Chromebook Flip C436, to the extent that you can still purchase it, is itself a competitor to its successor. It’s better built, offers better battery life, and it’s quite a bit smaller. It’s proof that new doesn’t always mean improved.

Finally, you should keep Google’s Pixelbook Go on your list if you don’t need a 2-in-1. Battery life is better, audio is superior, and it comes in a more diminutive package. It’s a little more expensive but not by much, and the vastly superior display will sway you.

The Chromebook Flip C536 isn’t fragile, but it’s not as robust as some competitors — including most other Asus machines. It’ll last you, but you’ll feel like you should be more careful with it. The typical one-year warranty is on hand, but at this price, it’s acceptable.

Yes. The Chromebook Flip C536 has its flaws, but the price makes it an attractive option despite them.

Topics
Best Chromebook deals: Get a new laptop from $114
Best 17-inch Laptop Deals: Get a large laptop for $330
Best gaming laptop deals: Save on Alienware, Asus and more
Dell Laptop Deals: Save on XPS 13, XPS 15, XPS 17 and more
The Galaxy Book 3 Ultra is Samsung’s most powerful laptop ever
Nvidia may have another monster GPU in the works, and the price could be outrageous
AMD’s Ryzen 9 7950X3D pricing keeps the pressure on Intel
What is ChatGPT Plus? Everything we know about the premium tier
ChatGPT Plus to bring priority access during peak times — at a hefty price
Usually $3,879, this Lenovo laptop is down to $1,479 today
Get this Asus gaming laptop with an RTX 3060 while it’s $400 off
All of Samsung’s videos from today’s Galaxy Unpacked event
Best 2-in-1 laptop deals: Save on Dell, Lenovo, HP and more