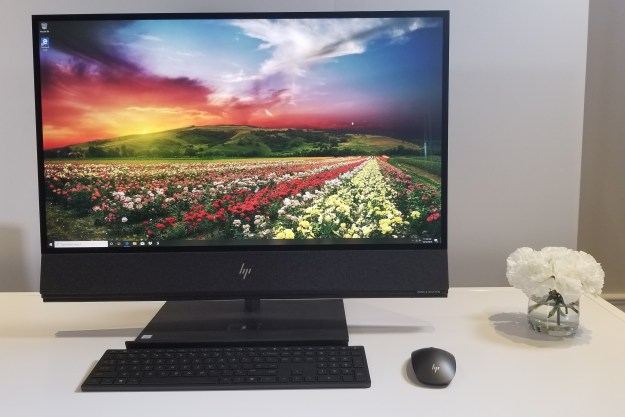 All-in-ones never took off. They make for a clean desk, but unless it’s the iMac you’re talking about, they’re fairly niche.

But with its latest all-in-one, HP wants to take on Apple’s best head-on. The new Envy 32 All-in-One has an answer for every feature of the iMac, whether it’s super-bright HDR600 4K display, the party-ready speakers, or the seriously impressive performance. But can HP’s latest attempt really steal the crown from the king of the all-in-ones?

When I first pulled the HP Envy 32-All-in-One out of the box, I got the chills. Even the iconic iMac looks plain by comparison.

Luxury is the name of the game here, though it’s a different take than the sculptural wire base and aluminum stand found of the Dell Inspiron 27 7790. The Envy opts for more natural finishes like leather, wood, and fabric, making for a warmer look that should fit well into a more a home office or bedroom. It’s downright cozy.

The front of this PC sports a prominent speaker grille that has an acoustic fabric layer on top. That’s then topped on the right side with a genuine leather tag, with the Bang & Olufsen branding. The metal base, meanwhile, is topped with a Dark Ash Woodgrain finish. When looking at it all together, I’ve never experienced a PC that felt quite this premium.

While the front of the computer is fancy, the back just means business. It sports a shiny HP Logo and a plastic finish, and the metal stand. It’s sharp edges and angles don’t quite match the front, looking inspired by gaming aesthetics.

That’s also where the majority of the ports are located. Though, because of the placement of the large soundbar, they’re awkwardly high when seen from the back. That makes them a bit difficult to reach when fumbling around for a USB port.

The mix of ports includes USB-C, a Thunderbolt 3 port, two USB-A ports, an HDMI in, HDMI out, and an ethernet jack. That’s more than what you get on Dell’s Inspiron 27 7790.

It is then complemented by a USB-A port on the bottom right side bezel, and a full-sized SD card reader on the bottom left side bezel. I really appreciate these side ports on the HP. Nothing’s more frustrating than having to feel around for an SD card slot on the back.

The HDMI in and Thunderbolt 3 are excellent additions. They let you daisy-chain displays next to the Envy, something that’s not possible on the Inspiron 27 7790. You can even choose to “Use Envy as a TV” or large display while the Windows system itself off.  That’s something I did, as I was able to plug in my Nintendo Switch, much like we were able to do on the Inspiron 27 7790.

Oh, and there’s a pop-up 5-megapixel Windows Hello webcam too, so you can log in to your PC with just your face.

As I continued setting up the Envy 32-All-in-One my attention came to the giant speaker grille. It’s one of the most obvious things about the PC that helps set it apart from the iMac — but it also serves a good purpose. HP claims that this is one of the loudest all-in-ones in the market. When put up against the speakers on the back of the iMac, or the smaller soundbar on the Dell Inspiron 27 7790, there’s plenty of reasons why.

First of all, there are two tweeters, two passive radiators, and two medium drivers behind the speaker grille. There’s also a woofer in the middle for better bass. But that’s a description. I still wondered, how loud can these speakers get?

I opened up a YouTube video and watched a clip of a recent Formula 1 race. The experience was breathtaking. With the volume at just 12%, I felt the bass in my desk as the cars raced down the track. I even was able to follow the sound of the engines and cars turning the corners. I had never quite felt this immersed while sitting in front of a PC before.

I see little reason for you to get a stand-alone speaker system if you buy this PC.

But that wasn’t all. HP also has embedded a new Advanced Audio Stream feature in the Envy 32 All-in-One. Unlike last year’s Envy, this improved feature lets you stream music from your phone to the PC, even while your PC is off. I tried it out and streamed some songs from my phone  It was loud and vibrant, and I see little reason for you to get a stand-alone speaker system if you buy this PC.

That in mind, I also see this as a nice solution for content creators, for which the highest-end iMac targets. Want to show off a video that you made to an important client? Just fire up the speakers on the Envy and blow them away.

Apple has proved it has mastered the display on an all-in-one time and time again. Its 5K iMac can’t be beaten in terms of pure pixel density. But HP has something to say about that. This Envy has an even sharper 31.5-inch 4K display, higher levels of contrast and brightness than an iMac. It looks to steal away the content creators that go running for Apple’s products.

First, there’s the size of the display. Apple’s maxes out at 27-inches, but the Envy comes in at 31.5 inches. Next, there’s the brightness. When we reviewed it, we got to a peak brightness of around 507 nits on the iMac. The IPS LCD panel on the Envy, meanwhile, comes in at an eye-burning 600 nits according to our colorimeter. Finally, there is the contrast ratio. While the 27 inch iMac comes with a 900 contrast ratio level, the HP Envy beats that out with an insanely high level of 6,000:1.

The Envy is likely to be a photographer’s best friend

On paper, that gives the Envy a 32% larger display area, 20% more brightness, and 5 times better contrast to the iMac. HP also claims that this is the first HDR 600 PC on the market. It also will mean that the Envy is likely to be a photographer’s best friend, for that high contrast. It even manages to surpass Microsoft’s Surface Studio 2, which held the record for the highest contrast ratio in all in one at 1,140.

Then, there’s the design aesthetics of the Envy too. While the iMac is surrounded by a chunky frame, HP’s Envy keeps thin bezels and has a 94% screen to body ratio. The screen also has a special anti-reflective coating, which helps stop glare from sunlight and the lights in a bright room.

Unfortunately, though, it is not a touch screen. This is a conscious design that HP made as HP believes it also would add to the price, and not make the system HDR 600 compliant.

One of the biggest contributors to the iMac’s success has been its performance. It runs desktop-class processors, ranging all the way up to the 8-core Core i9. Most Windows all-in-ones use weaker laptop parts, both in terms of processors and graphics. That includes both the Dell Inspiron and Surface Studio 2.

Our review unit has a 62-watt Intel CPU you’ll find on high-powered gaming desktops. It’s equipped with the 9th generation Intel Core i7-9700 processor, which has 8 cores. That’s also paired with 32 GB of memory, and a 1TB Intel Optane SSD. There is no Core i9 option, which loses you the higher thread-count and clock speed. If you want the absolute fastest all-in-one for content creation, the iMac is still your best choice.

With all this raw power of a desktop CPU, I am sure this is a great PC for content creators and even gamers.

Still, the Envy is no chump. It managed to help boost its way through our Geekbench testing. Although Geekbench is just a simulated test, the Envy managed to punch out a single-Core score of 5,808, and a multi-Core score of 29,124. That single-core score is behind the iMac 5K 6,324 and 33,024, thanks to that faster Core i9 option.

In a more demanding test where we encoded a 4K video, and this processor still held up well. It finished the encode in 101 seconds, which is very close to the 98 seconds reported when we tested the 5K iMac. That’s a good sign for performance in a number of content creation applications such as video editing in Premiere.

While the desktop processor in the Envy 32 All-in-One was a nice surprise, HP has more performance up its sleeve. This all-in-one sports an option for up to RTX 2080 graphics. That’s a first for all-in-ones, and it makes the Envy a great gaming PC as well and smashes any of the lower-powered AMD cards found in the Mac.

There is a catch, though. These are mobile graphics cards as opposed to full desktop ones, and our unit was equipped with a weaker RTX 2060 inside. But even that system was impressive. We tested out games such as Fortnite and Civilization VI. In Fortnite, the HP pushed 27 frames per second on 4K Epic settings. On lower 1080p high settings, the Envy was a super-smooth 148 frames per second on average. That destroys the framerates we got on the 5K iMac.

This isn’t meant to be a gaming machine, but it can be if you really want it to

As for Civilization VI, the HP pulled out frames of about 166 on medium settings in 1080p, and 100 on ultra. For most games, you’ll want to stay away from 4K, but in something like Forza Motorsport 7, the game easily held on to 60 frames per second at 4K with max settings.

This isn’t meant to be a pure gaming machine, but it certainly has chops. Just be prepared to listen to the fans speed up, as the system will get hot quick, especially along the top bezels. That’s the price you pay for this much power, but that’s nothing new for gamers.

The Envy 32 All-in-One is a great Windows take on the iMac. Fans of the iMac may not be dissuaded, but with its luxurious design, excellent speakers, and a vibrant 4K display, it’s certainly a serious competitor. The power inside makes it that much

You can indeed buy an Apple 5K iMac, though it’s significantly more expensive and less graphically powerful. For raw content creation, though, it still may be the better choice.

While sporting outdated Intel CPUs, the Surface Studio 2 is an interesting option with its hinged-design and touch screen. The lack of power is a problem, though — as is the inordinate price.

A cheaper option would also be the Dell Inspiron 27 7790 which sports a similar HDMI in, and a sleek modern design, but weaker laptop-class processors.

The HP Envy 32 All-in-One should last you quite a while. The 4K screen resolution, build quality, port selection, and processing power is well up to date and should last you within four or five years.

Yes. If you need a premium Windows PC that can power you through content creation, gaming, then this is the best all-in-one you can buy.

Follow our live blog for more CES news and announcements.