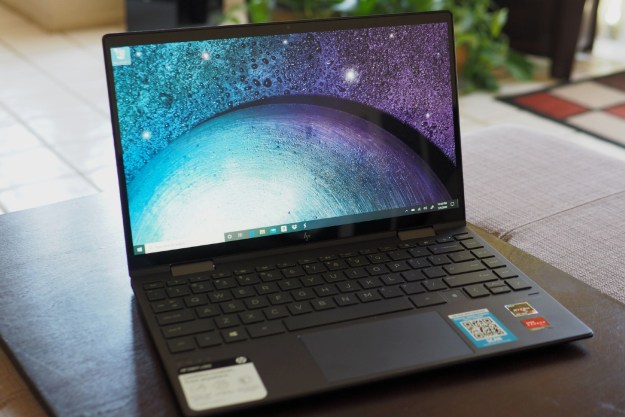 “The HP Envy x360 13 is a midrange laptop that refuses to compromise, despite its low price.”

Better performance for a lower price? That’s not how laptops are usually sold, but that’s exactly what the new HP Envy x360 proposes to do.

HP’s Envy line has played second fiddle to the company’s premium Spectre . It has been the midrange option, and has always resulted in corner-cutting. No more.

Though not perfect, as soon as I held the Envy x360 in my hands, I knew my expectations for a laptop at this price would need to change.

The Envy x360 13 is an all-metal laptop, constructed of stamped aluminum in the elegant Midnight Black color that’s also an option on the Spectre x360 13. The difference here is that the Spectre is machined aluminum, but you won’t tell the difference holding them side-by-side. The Envy x360’s build exudes quality, and thanks to some reductions in the Envy’s bezel, both feel very small for 13-inch .

Compared to competitors in its price range, the Envy x360 stands out. The materials are far better than a laptop like the all-plastic (and much larger) Lenovo IdeaPad Flex 5 14. Though that laptop is around $200 cheaper, it uses the same Ryzen 5 processor and features the same 2-in-1 functionality.

The Envy x360 is quite thin and light, as well. At 0.65 inches, it’s thinner than the Spectre x360 at 0.67 inches and a bit heavier at 2.92 versus 2.88 pounds. The Envy x360 is smaller than the Lenovo IdeaPad Flex 5, which is 0.82 inches thick and 3.3 pounds. And compared to the previous version of the Envy, HP did a remarkable job of squeezing more computer into a thinner chassis — the Envy definitely encroaches into the Spectre x360’s space when you consider their overall designs.

As a 2-in-1, the Envy x360 feels sturdy in all four of its modes — clamshell, tent, media, and tablet. The hinge is smooth in operation but holds the screen in place with only the slightest wobble when you move it around. It’s not quite as tight as the Spectre x360, but it’s better than the IdeaPad Flex 5. Here again, the delta between the premium Spectre x360 and the midrange Envy x360 is smaller than you might expect.

Moving on to aesthetics, the HP Envy x360 13 isn’t nearly as extravagant as the gem-cut Spectre, but it’s still an attractive laptop. Call it sleek rather than luxurious — its lines are clean and streamlined, giving it a cohesive design that looks good from every angle. Compared to the blander Lenovo Flex 5 14 Ryzen, the Envy is the more refined laptop.

Connectivity is about what’s expected on a thin and light machine. There are two drop-jaw USB-A 3.1 ports for legacy support, which is nice to have, along with a microSD card reader and a USB-C 3.2 port (that does charge the laptop, in spite of the proprietary plug).

AMD’s Ryzen 4000 chips have been very impressive. Every laptop we’ve tested with the CPU, including some budget models, have performed much better than their Intel 10th-gen alternatives. In fact, whether you’re talking Ice Lake or Comet Lake, there’s a Ryzen 4000 chip that will beat it — you have to jump up to 45-watt Intel parts to get better performance.

Switching to our Handbrake test that encodes a 420MB video as H.265, the Envy x360 13 took just under three minutes, That’s quick, though the IdeaPad Flex 5 was 16 seconds faster. I tried out HP Performance Mode in its Command Center utility and saw the Envy come within five seconds of the IdeaPad. Compare these scores to like the Microsoft Surface Book 3 13 with a Core i7-1065G7 that took about four and a half minutes. Note that the Acer Swift 3 with the Ryzen 7 4700U was only about 10 seconds faster yet, meaning that the Ryzen 5 4500U is a nice sweet spot for this kind of performance. Again, comparing the Envy x360 to the Spectre x360, the Envy was a full minute faster even with the Spectre running in Performance mode.

The Envy x360 13 might not be the fastest Ryzen 4000 system we’ve tested, but it still beats most Intel systems. You’ll find it excellent for demanding productivity work and even some creative apps in a pinch. Just don’t plan on gaming — you’ll get performance that’s only a little better than Intel’s new Iris Plus graphics and far less than you’ll get from a discrete GPU.

The Envy’s display doesn’t compare quite as well to some other . For example, the Dell XPS 13 clamshell’s Full HD display had better colors at 77% AdobeRGB and 97% sRGB, more accurate colors at 1.53, and a higher 1440:1 contrast ratio. It wasn’t quite as bright at 377 nits, though. You can get the same display as the Envy’s on the Spectre x360 13, and the more premium machine also offers a 4K OLED display with absolutely spectacular colors and contrast. That’s one checkbox the Envy x360 can’t check off.

I enjoyed this display in daily use. It was plenty bright and the contrast made black text stand out nicely on a white background. Colors may not be good enough for professional photo and image editors, but they don’t get in the way of my enjoying looking at pics or watching Netflix.

Finally, the downward-firing speakers were surprisingly loud without distortion. That was a nice surprise. Bass was lacking, but mids and highs were clear, and I could rely on the speakers for casual listening. I did pull out my headphones for action flicks and tunes, though — but that’s true on just about all except for Apple’s MacBooks.

The keyboards on the HP Spectre x360 are my second-favorite behind Apple’s awesome new Magic Keyboard on the most recent MacBooks. They have plenty of travel and nice large keycaps with good spacing, and there’s a clickiness to the mechanism that avoids any hint of bottoming out. I can type as fast on those keyboards as I can any other — including Apple’s. Why do I mention the more expensive Spectre’s keyboard? Because as far as I can tell, it’s exactly the same keyboard on the Envy x360. Once again, HP has removed a key differentiator between these two machines.

The touchpad on the Envy x360 is also similar to the Spectre’s, although its surface isn’t quite as smooth. It supports Microsoft’s Precision Touchpad protocol, though, so multitouch gestures work perfectly. Interestingly, I prefer the Envy touchpad’s click to the Spectre’s — it’s softer and evokes more confidence that a button was actually pushed.

The Envy x360 has a touch display, of course, being a 2-in-1, and it works as well as always. It also supports Microsoft’s newest pen protocol, which promises longer battery life (up to 30 days) and a more natural tilt function to go with the 4,096 levels of pressure sensitivity. And yes, you guessed it, this is something the Spectre doesn’t have — although the pen isn’t bundled in with the Envy.

Finally, there’s a fingerprint scanner embedded in the keyboard next to the arrow keys that works perfectly. It doesn’t, however, include Windows Hello over facial recognition like spendier do. The Envy x360 has a privacy screen for the webcam, although unlike the Spectre it’s a physical cover that’s activated by pushing a dedicated button on the keyboard. It’s neat watching the cover appear when you press the button.

There’s also a dedicated button to mute the microphone, another privacy function that’s been carried down from the Spectre line.

The jury is still out on the Ryzen 4000’s efficiency, but it’s looking like the chips so far don’t beat Intel. The Envy x360 13 is equipped with 51 watt-hours of battery life, and it enjoyed a low-power display that’s helped some other to spectacular battery life. Even so, the Envy’s results weren’t anywhere near the top of our list.

In the web browsing test, which is the best indicator of how long the battery will last running typical productivity tasks, the Envy lasted for just over nine hours. That’s a good score, but well under the Dell XPS 13’s 12 hours. It did beat out the Lenovo IdeaPad Flex 5, which lasted just less than eight hours.

In our demanding Basemark web benchmark test, the Envy lasted just under four hours. Again, that’s a strong score but was beaten solidly by the XPS 13’s 4.7 hours. The IdeaPad Flex 5 lasted just eight minutes fewer. Finally, in our video test that loops a local video clip, the Envy lasted for 13 hours compared to the XPS 13’s 14.5 hours and the IdeaPad Flex 5’s 11 hours. That’s the one test where the low-power display demonstrated its value.

Overall, you’re likely to get close to a full day’s productivity out of the Envy x360 13, as long as you’re not pushing the Ryzen CPU too hard. I suspect that Intel’s 10th-gen CPUs are a bit more efficient than the Ryzen 4000 line, but that’s not something I could prove — we still don’t have enough data.

The HP Envy x360 13 creates something of a conundrum for HP. It’s faster than the more expensive Spectre x360 13 and built nearly as well. If you’re not looking for a display, then I can’t give any strong reasons for spending more on a Spectre. That’s relatively high praise for the Envy, and makes it a great 2-in-1 at a midrange price.

The Envy really doesn’t have many weaknesses, although battery life wasn’t its greatest strength and it’s a shame that the pen isn’t included. It’s simply a well-designed 2-in-1 that will meet the needs of most people looking to spend around $1,000 on a machine. You can even configure down all the way to $550 if you really want to cut costs.

The Lenovo IdeaPad Flex 5 is a close competitor and costs about $200 less, sporting the same Ryzen CPU and slightly faster performance. Its battery life isn’t as strong, though, and its screen is lower quality.

The Lenovo Yoga C640 is another good option, starting at just $600. The Intel Core i3 is a fairly big step back in terms of performance, but you get significantly better battery life in exchange.

The HP Spectre x360 13 is step up in aesthetics and the ability to configure a display. As configured (although with a slower Intel CPU and 512GB of storage), it’s about $300 more expensive, and adding the display bumps up the price another $200.

The Envy x360 13 is built well enough to last as long as you’ll need it, and its performance will keep up for years as well. The inclusion of Thunderbolt 3 means you’ll be able to connect modern peripherals. The 1-year warranty, though, is typical and disappointing.

Yes. The Envy Envy x360 13 is a sleek, well-built, and fast 2-in-1 that feels far more premium than its price tag suggests.