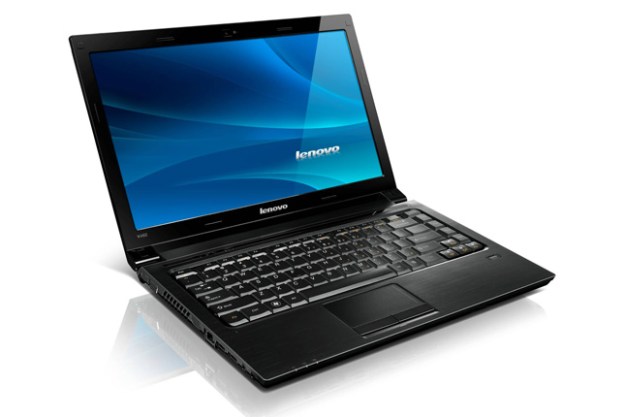 Maybe you can have it all. Despite a notebook market fragmented into various extremes – from netbooks that can barely play YouTube videos to desktop replacements you can barely lift off the desk – a handful of notebooks still manage to find some middle ground. Lenovo’s attempt to balance size, power, and price manifests as the IdeaPad V460, an aluminum-clad, 14-inch notebook with both integrated and discrete graphics for power when you need it and battery life when you don’t.

Lenovo’s V460 follows the now-familiar pattern for mobility notebooks with some bite: It idles on Intel’s GMA graphics chipset for puttering around the desktop, then fires up the GeForce 310M waiting in the wings when it’s time to crunch some numbers. Our review unit got an extra dose of pep in the form of an Intel Core i5 processor running at 2.27GHz, rather than the Core i3 on the base configuration. Every version available through Lenovo offers GeForce 310M graphics with 512MB of dedicated RAM, a 500GB hard drive, 4GB of DDR3 RAM, and a built-in DVD-RW drive. Some retailers, including Sears and Walmart, carry a cheaper variant, which squeezes the price down $200 with a 320GB hard drive and no GeForce chip.

Unlike many next-gen notebooks with switchable graphics, including the competing Asus U30Jc-A1, the V460 lacks Nvidia’s Optimus technology, which basically acts like an automatic transmission for switching GPUs. To Lenovo’s credit, it does offer a suite of some business-savvy options carried over from the ThinkPad line that might be of use, including shock protection for the hard drive, lockable USB ports to prevent theft, and a standard fingerprint reader.

At 4.8 pounds and 1.3 inches thick, the V460 is actually right on par with the competing Asus U30Jc-A1 – a flattering comparison considering it delivers an extra inch of screen size. Neither machine compares to leaner “thin and light” machines that use ULV chips, but they more than make up for the boost in size with dramatically increased performance.

In a overdue departure from the textured plastic found on many of Lenovo’s other ThinkPads, the V460 gets cloaked almost entirely in anodized black aluminum, which gives it a stealthy, almost sinister look. Think less of an exec with a ThinkPad popped open on the boardroom meeting table, and more of a Bond villain plotting world domination in an underground cavern while stroking his pet spider. Even if you have no plans to control the world by injecting the entire population with venom to which only you hold the anecdote, it’s a beautiful design.

With all the pixel-pushing prowess the V460 offers, you may just want to hook it up to a 1080p HDTV now and then. Lenovo obliges with both HDMI and VGA video outputs, on the left-hand side, joining an Ethernet port, microphone and headphone jacks, and two USB ports. DC power connects on the right, almost uncomfortably close to a third USB port, which could cause issues for oversized thumbdrives and wireless modems. The right also offers a tray-loading DVD drive and a Expresscard slot for addons and accessories. Up front, you’ll find a hard switch for hopping between GeForce and Intel graphics, right beside an almost identical switch for turning Wi-Fi on and off. Visually, the white light (which signals that the GeForce has fired up) and chrome plastic on the graphics switch makes it easy to differentiate, but to the finger, they feel too similar, and you’ll need to tilt the notebook up and check to see which is which the first few times you use them. Lenovo hides the usual multimedia card reader up front, too.

The Lenovo V460 sports a 14-inch screen with 1366 x 768 resolution – about standard for notebooks in this size class. While it offers above-average brightness at its highest levels, it also takes on a slightly bleached-out look with brightness cranked to max. Side to side, it’s reasonably easy to see the screen from off axis, but up and down, you’ll need to dial in the screen reclining to avoid severe distortion.

Two slim upfiring speakers on the V460 provide surprisingly ample volume. Though music can get a little ear-rending at the upper extremes, we were happy to have it for watching Hulu in environments with background noise, where dialogue often gets lost in the mix on smaller notebooks.

Lenovo opted not to go with the trendy new Chiclet or “island” style of keyboard – and we’re glad it stayed old school. The company’s ThinkPad heritage bubbles up through every deepy, springy keypress, which is the keyboard equivalent of saying a new violin has a lot in common with a Stradivarius. Its the rare notebook keyboard so crisp and easy to type on, you’ll actually think of more to say after a few paragraphs.

The touchpad isn’t quite as remarkable. While its lightly dimpled matte surface offers ample room to cruise across, scrolling by dragging a finger down the far right side didn’t work properly. Pages would scoot in the right direction, but refused to continue scrolling, and no amount of tweaking settings managed to iron it out. We also encountered problems while gaming – after registering a touchpad tap as a “fire” command, it seemed to have trouble knowing when to stop, and occasionally got stuck firing a shot every other second or so.

The Nvidia GeForce 310M may not be the same chip you would get in a purebred gaming notebook, but it’s no slouch, either. In Crysis, with the screen set at native resolution and all settings at low, the game is playably smooth with frame rates consistently above 25 fps. Granted, it doesn’t leave much headroom for boosting settings or bragging rights, and certain intense effects can bring a noticeable stutter, but just being able to dip a toe in this game is an achievement at this size and price level. If anything, the hard drive seemed to act as the biggest bottleneck, chugging along to load map data as we rushed into new areas.

Less demanding games, like BioShock, presented less of a challenge to the humble V460, but it still doesn’t quite have enough grunt to tear through without breaking a sweat. The opening fire-on-water inferno put quite a strain on the notebook with all settings to medium, dropping framerates to around 20 fps, but subsequent gameplay managed easy and very playable 30s. A maxed out MotoGP 08, meanwhile, felt as fast and fluid as the bikes on the screen at 40 to 50 frames per second.

In 3DMark06, the V460 scored 3,268 3DMarks, and an impress 5,171 PCMarks in PCMark Vantage. While solid, the 3DMark numbers signficantly lag behind the similar Asus U30Jc at 5,792 3DMarks, a difference that seems to manifest in more real-life playability from the Asus.

All that V8 performance doesn’t come for free. Even after swapping out the V6 performance of the GeForce 310M for the four-cylinder fuel economy of the Intel GMA chip, the V460 hits the battery harder than we expected.

With the most severe power-saving settings engaged, but brightness still at full and Wi-Fi on, you can expect about three hours of life out of the little beast. Flip to the GeForce and that looks more like two hours. Start using the GeForce, as with some YouTube movies, and the max cuts in half to more like one hour and 30 minutes.

As the consumer flavor of a business brand, IdeaPads have always seemed to have trouble finding any identity, typically settling somewhere awkward. That ends with the sleek, versatile V460, which successfully carries both the ThinkPad’s clean design and sensibility (that lovely keyboard) over to the IdeaPad marquee, with a dash of gaming performance thrown in for flavor, courtesy of the Nvidia GeForce 310M. But be warned: Lenovo’s particular balance of power and portability leans more toward punch than endurance, making the V460 a poor choice for travellers, even if you will want to bring it everywhere to show it off. Asus’ similar U30Jc manages to wring out much better battery life without compromising performance, even if it doesn’t look and feel as solid as the V460.