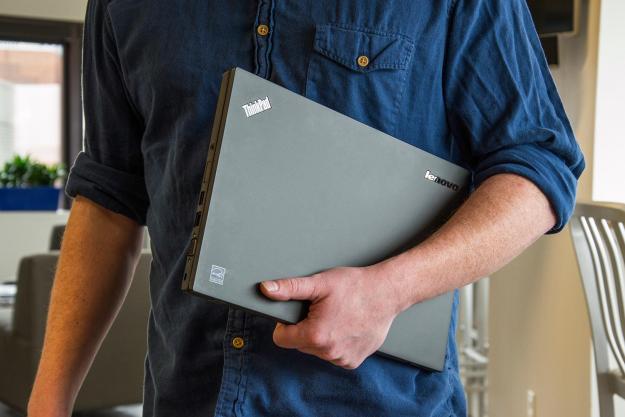 “Enthusiasts with a passion for traditional notebooks will fall in love with the T450s.”

The Lenovo ThinkPad T Series is, alongside the company’s X Series, the oldest line of laptop computers in existence. Originally released in 2000 with a cutting-edge titanium chassis and 14-inch display, the T-Series has been in production ever since, and it remains the mainstay of the ThinkPad fleet.

But it now from:

It’s a bit fitting that the system is part of the T-Series because, in recent years, the letter has seemingly come to stand for “traditional.” While other ThinkPads have evolved and changed the T-Series has more or less stayed the same. Sure, the keyboard design moved towards the new Accu-Type design, and the display form factor has moved to the common 16:9 aspect ratio, but in most respects it’s a conservative system that does as little as possible to mess with the brand’s recipe for success.

The ThinkPad T450s is the latest entry in the T-Series, and the thin-and-light version of the standard T450. Compared to the company’s X1 Carbon, though, this notebook seems downright chubby, despite the fact it’s still well under an inch thick.

Our review unit excused its size with a powerful Core i5-5300U processor, eight gigabytes of RAM and a 256GB hard drive. It also boasted two 23 watt-hour batteries and a 1080p display with 10-point multi-touch. Impressive specifications, to be sure, but they inflated the price from a base of about $880 to an expensive $1,530. Does it make sense to spend that much on 14-inch laptop lacking a quad-core processor or 1440p display?

Blast from the past

Like the ThinkPad X1 Carbon we recently reviewed, the T450s is not a significant re-design of the previous model. In fact it uses a chassis that’s almost identical in to the preceding T440s, which has been around since late 2013. Like that system, the T450s is a hair more than eight tenths of an inch thick and weighs 3.5 pounds. Lenovo says the new model’s enclosure is slightly different, and a few millimeters thinner, but it’s hard to tell at a glance.

Unlike the X1, though, the T450s is starting to seriously look its age. While this notebook is well under an inch thick, its boxy design makes it appear larger than it is. Next to an all-new Core M Ultrabook, like the Asus Zenbook UX305, the T450s looks like a dinosaur.

The design is not without purpose, however. The T-Series is seriously durable. It meets MIL-SEPC 810G standards, which means it can endure blowing sand, temperatures of up to 60 degrees Celsius and sudden shocks. While it doesn’t feature Carbon in its name, the T450s in fact has a carbon fiber display lid. Lenovo claims the lid was tested for durability by lobbing metal balls at the notebook from a height of one meter. Even a spilt drink is (usually) no problem, as the keyboard features drain holes designed to rout your morning coffee safely through the notebook.

Connectivity is a blast from a past, in a good way, and almost identical to the T440s. There are three USB ports, all of them 3.0, along with mini-DisplayPort, VGA, Ethernet, a card reader and a combo headphone/microphone jack. These impressive wired options are backed up by 802.11ac wireless and Bluetooth 4.0.

While the T450s is very similar to its predecessor, it is, in one key area, much different from the T440s, and in fact more similar to the T431s from 2012. The touchpad has reverted back to a design that includes two distinct, tactile left/right buttons along with a middle scroll button. The T440s had integrated all three into the surface of the touchpad, a choice that ThinkPad fans despised. We harped on the design in our review of that laptop, calling the touchpad “loosely sprung, unsteady and a bit cheap.”

Next to a Core M Ultrabook, like the Asus Zenbook UX305, this T450s is a dinosaur.

Lenovo thankfully rectified its mistake, and the new touchpad design vibes perfectly with the trackpointer, if that’s your thing. Even if it’s not, the touchpad is excellent, boasting a wide and responsive surface. Excluding other ThinkPads, no Windows notebook offers a better way to move the mouse without an actual mouse.

The keyboard is excellent as well. It’s so good, in fact, that it has spoiled other laptops for us. Significant key travel, pleasing tactile feel and a spacious layout make typing on the T450s a treat. There are just a few oddities that take getting used to, like the fact the Control key is not the furthest key to the left on the bottom row (Function is there instead). Backlighting is standard, though it offers only two brightness levels and suffers from significant light leak.

Touch, but only if you want

Different users have different needs, and the T450s recognizes that with an array of display options. Buyers on a budget can make do with a 1,600 x 900 display, but those with more to spend can opt for either a 1080p anti-glare panel or a 1080p touchscreen. Our review unit came with the latter.

The first thing you should know about the panel is its price. Opting for the touchscreen will set you back an astounding $310, while going for the normal 1080p IPS anti-glare panel tacks on a mere $70. It’s an incredible expense that’s hard to justify.

If you do opt for touch, you’ll receive a panel that’s built to the particular needs of travelers. While the display is somewhat glossy, we found it far less distracting than the mirror-like finish of most touchscreens. That trait, combined with a reasonably bright backlight that caps out at 302 lux, made the screen usable in most situations.

The T450s outperformed most competitors, leaving even those equipped with the slightly inferior Core i5-5200U in the dust.

Image quality came in a bit behind the competition. A low maximum contrast ratio of 420:1 was the reason for this. Dark scenes never came close to a true, inky black, and perceived depth suffered as a result. Most modern laptops are far better. The Asus Zenbook UX305, which has a matte display, offered a ratio of up to 760:1, and the MacBook Pro 13 with Retina can hit 770:1.

In other areas, though, the T450s was respectable. We measured a color gamut spanning 98 percent of sRGB and 74 percent of AdobeRGB, and color accuracy was better than average. Subjectively the display looked good enough to provide a pleasant experience in movies and games, but the lack of contrast was noticeable with any high-quality source content.

The built-in speakers were better than expected, delivering enough oomph at maximum volume to fill a large room. As with most laptops, audio is tinny because of a lack of bass, but the built-in drivers will do in a pinch. They also boast a clear mid-range, which is useful for video conferences and voice chat.

Lenovo shipped our review unit with Intel’s Core i5-5300U, a minor upgrade over the i5-5200U. The main difference is a Turbo Boost maximum clock that’s 200MHz higher, increasing the cap from 2.7GHz to 2.9GHz. That’s not enough to make a night-and-day difference, but there’s no denying the T450s did well in Geekbench.

As you can see, the T450s easily outperformed other portable systems, leaving even those equipped with the slightly inferior Core i5-5200U in the dust. This may be the benefit of the system’s bulky chassis, which provides plenty of thermal headroom. Only Lenovo’s ThinkPad X1 Carbon, which we reviewed earlier this year, can outrun the T450s – and only just.

We further tested graphics performance in Diablo 3. At low detail and 1080p resolution the game managed a playable 29 frames per second, but that average dropped to 15 FPS at high detail. Gaming clearly isn’t the purpose of the T450s, and while some titles will run, demanding 3D games will struggle even at minimum or near-minimum settings.

A tale of two – no, three – batteries

Every Lenovo T450s ships with at least two batteries, each providing 23 and half watt-hours of juice. One battery is integrated into the chassis, and the other is removable. This unusual design makes it possible to hot-swap batteries while the system is on for as long as the integrated battery has power.

This configuration hit six hours of endurance in the Peacekeeper web browsing benchmark. That’s a respectable figure, but not as long as expected given the system’s specifications. Many alternatives last far longer. The Asus Zenbook UX305 lasts six hours 17 minutes, the Dell XPS 13 hangs on for nine hours and 25 minutes, and the Lenovo ThinkPad X1 Carbon soared to 10 hours and 13 minutes.

If the base system’s six hours isn’t enough for you, though, there is another option. Lenovo also offers a 72 watt-hour extended life unit. This adds about a pound to the system’s weight and an extra inch to the rear, which props the notebook forward when used on a level surface. If that’s not an issue for you, though, you’ll enjoy an astounding 13 hours of life.

Power draw figures showed the T450s consuming less than expected: nine watts at idle with the display at maximum brightness. That compares well to the Dell XPS 13, which needed 10 watts. At load, though, the ThinkPad’s draw shot up to 36 watts, while an XPS 13 needs no more than 33 watts.

Large and actively cooled, the T450s is a recipe for great thermal performance, and it delivers. At idle the system hovers around 81 degrees Fahrenheit, and at full load it barely exceeds 90. This ThinkPad is cooler at full tilt than the Zenbook UX305 or Dell XPS 13 at idle.

This does mean the fan is rather active. At idle it’s not overly intrusive and easily blends into background noise. Open demanding software or play a game, though, and it kicks up to a 44 decibel whirr. That’s loud enough that it may annoy some users, though in fairness to the ThinkPad, competitors like the Dell XPS 13 and MacBook Pro 13 with Retina are even louder.

The T450s has a standard one-year warranty on parts and labor. Numerous extended warranty options are available, extending for as long as four years.

72 watt-hour extended battery  ($74)
This battery can more than double the battery life of the Lenovo ThinkPad T450s for less than $100, though it does add some bulk.

Lenovo Ultra Dock ($170)
The T450s has solid connectivity for a modern notebook, but this Ultra Dock can add even more ports and acts as a charging station.

Microsoft Sculpt Comfort Mouse ($30)
This small Bluetooth mouse from Microsoft is a great addition to the arsenal of any notebook road warrior.

Targus Ultra-mini Numpad ($17)
The 14-inch T450s doesn’t have a numpad, which may disappoint those who work with numbers frequently. This USB add-on is an easy fix.

Lenovo asks $1,530 for the ThinkPad T450s we tested (and that’s not including the optional 6-cell extended battery). That makes it one of the most expensive notebooks we’ve recently reviewed, and we didn’t see much that justifies the cost aside from strong performance. Display quality, battery life and chassis design are mediocre. We love the keyboard and touchpad, but they’re not worth a premium this steep.

On the other hand, most people won’t need to spend so much. Opting for a standard 1080p display instead of the touchscreen shaves $240 from the budget. Sticking with the Core i5-5200U subtracts another $100. Those two changes drop the T450s down to about $1,220, which is still a lot, but it’s at least in line with the competition.

Even so, the T450s is a system for users with very specific tastes. Its keyboard is unparalleled, its touchpad is excellent, and its performance is solid, but these traits are balanced by the bulky chassis. This ThinkPad is for people who believe laptop design peaked several years ago and want to kick it old-school with modern hardware. If that sounds like you, you’ll love the T450s.