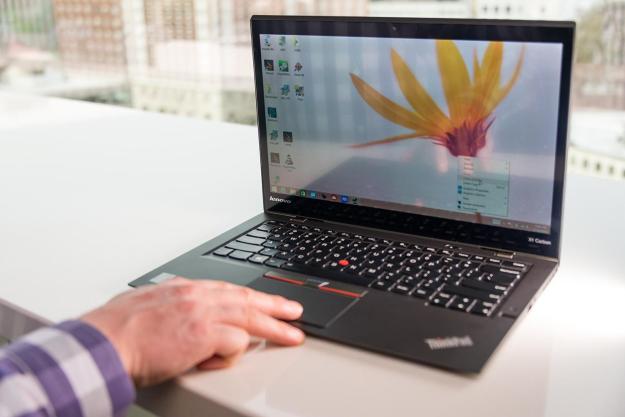 “Lenovo’s X1 Carbon is no longer the slimmest notebook around, but its excellent battery life and rugged quality keep it a contender.”

The ThinkPad brand has always danced awkwardly with innovation. Business users and enthusiasts have greater need for cutting-edge technology than most, but they’re also critical — and often resistant to change. They demand the best, but aren’t forgiving to failed experiments.

Lenovo found that out the hard way with last year’s version of the X1 Carbon, which introduced a unique row of touch-sensitive function keys and ditched tactile touchpad buttons. Users protested these alleged advances, forcing the company into retreat. The new X1 has a more traditional interface.

Regression isn’t a stellar selling point, as it means the new model is basically the same as the old one; same chassis size, same weight, same display resolution. Intel’s 5th-generation processors have joined the party, however, and promise to improve battery life by up to two hours, in Lenovo’s estimation. Is stepping backwards a step forward, or does this new model struggle to keep pace with bolder competitors?

Still thin, but not the thinnest

The X1 Carbon is only seven-tenths of an inch thick and, due to its tapered design, feels even thinner in-hand. This is a respectable figure, but it’s no longer enough to make the Carbon special. Competing models like the new Samsung ATIV Book 9 take the slimness crown.

It’d be a lie to say this ThinkPad feels clunky, though. At times its slim design and sleek exterior almost feel too slick, as if the system could easily slip out of hand. A minor drop would likely be no problem, though, as the Carbon is absolutely solid. There’s no flex in the chassis — and very little in the display lid too.

At a glance, the design of the notebook can be described as “the MacBook Air’s darker side,” and closer inspection reveals little to dissuade that assessment. Like the Air, the Carbon is tapered, elegant, and a bit basic. Lenovo’s system does boast smaller display bezels, however, and looks more modern as a result. Dell’s XPS 13 is undoubtedly more striking, but this system looks attractive without catching too much attention, which is the ThinkPad brand’s MO.

Two USB will have to do

Like most slim laptops, the Carbon offers limited connectivity. It has two USB 3.0 ports, one HDMI-out, and one mini-DisplayPort along with the typical combination headphone/microphone jack and SDcard reader.

More ports are readily available with the Lenovo OneLink Dock, which adds four more USB 3.0 ports, two USB 2.0 ports, Ethernet, and more, but it also adds $150 to the Carbon’s price.

Wireless connectivity is solid, with 802.11ac and Bluetooth 4.0 standard.

Keyboard quality is hugely important to every ThinkPad. These are systems built for work, and work often means typing. Lenovo’s 2014 version of the Carbon was knocked for its strange function keys and mediocre keyboard; the new model only rectifies the first issue.

Actually, the keyboard isn’t bad for an ultrabook, as key travel is respectable and the layout is quite spacious. There are just a few lingering oddities, such as the spacebar, which feels too tall for its location. Compared to traditional ThinkPad standards it’s not up to par, but it’s not a terrible place to write a term paper or business plan.

There is one area where it stands out: the backlight. We found it difficult to tell backlighting was even active in daylight, and while that doesn’t look cool, it’s actually a boon because it means very little light is escaping from anywhere except the keycaps. At night the result is a smooth, elegant look just bright enough to be useful, but not so bright as to be distracting.

Any qualms over the keyboard are rectified by touchpad and trackpointer, both of which are responsive. The Carbon’s little red nubbin may seem old-fashioned in a touchscreen world, but it’s more precise than any input short of an external mouse. That’s actually even more useful in today’s world of pixel-dense displays, which often rely on tiny buttons or text. Some loyalists will prefer the Carbon to an Air or XPS 13 because of the trackpointer alone.

Not the best display — or the worst

While the base Carbon has a 1080p display, our review unit arrived with the upgraded 2,560 × 1,440 touchscreen. It’s a glossy panel, which may cause problems for productivity, especially because the backlight’s maximum brightness of 195 lux is hardly the most vibrant we’ve seen. It’s adequate, though, so long as the system is kept away from windows.

The display’s 1440p resolution, packed into the 14-inch screen, offers 209 pixels per inch, which is almost as dense as a MacBook Pro’s Retina display. Sharpness isn’t an issue, but depth can be, as the contrast ratio only reached as high as 560:1 in our tests. That’s not bad, but Dell’s XPS 13 can offer 690:1, and the admittedly more expensive Asus Zenbook NX500 soars to 760:1. We also noted a gamut that spans 84 percent of sRGB and 62 percent of AdobeRGB, lower figures than many competitors.

In practical terms these numbers mean an image that’s adequate but never outstanding. The downfalls of the display were most noticeable in high-resolution video, where the contrast ratio translated to dull video quality. For productivity the panel will be more than adequate, unless you routinely edit color-sensitive digital images.

Audio quality proved a surprising strong point, as the bundled speakers delivered clear, loud audio with minimal distortion. Bass was nowhere to be heard, so the sound was clearly geared more towards conference calls than Spotify, but it’s better than the average ultrabook.

Like most ultrabooks the ThinkPad X1 Carbon comes in a variety of configurations, with a Core i5-5200U processor as the standard CPU and a Core i7 as the premium model. Our review unit fell between those extremes with its Core i5-5300U, which bumps the base clock from 2.2GHz to 2.3GHz and the Turbo Boost maximum from 2.7GHz to 2.9GHz over the standard model. That increase, though small, had a significant impact on performance.

The Carbon is the quickest fifth-generation Core system we’ve tested so far. That’s not saying a lot, since we haven’t sampled a Core i7 model yet, but a win is a win. Slim as it is, this system packs serious grunt.

Our review unit came with an upgrade to a 256GB solid state drive, as well, up from the base 128GB unit. It delivered modest performance for its category, with sequential read speeds of 477 megabytes per second and sequential write speeds of 241Mbps. Neither figure can keep up with the Dell XPS 13, which hit 469Mbps in reads and 405Mbps in writes.

While the processor in the Carbon is a bit quicker than most we’ve tested this year, the graphics component is the same Intel HD5500 solution we’ve tested several times before. It proved middle-of-the-road when compared against other systems.

The Carbon’s score is typical of an ultrabook, and indicates the system will have trouble with many modern titles, particularly at its native resolution of 2,560 × 1,440. As we found in our recent test of three HD graphics generations, Intel’s integrated solution still isn’t adequate for general gaming, even if it has come a long way.

We confirmed the system’s lack of gaming grunt by playing Diablo 3 at 1080p resolution. With all settings at low the game averaged 27 frames per second (which was barely playable), but turning settings up to high decreased the average to 14 FPS (which wasn’t). Diablo 3 is far from the most demanding game around, of course, so the X1 isn’t going to handle most titles well.

The Lenovo ThinkPad X1 Carbon is an easy system to travel with. As with the XPS 13, the Carbon’s slim bezels and minimal excess bulk results in a system much smaller than the screen size, in this case 14 inches, might suggest. Overall width and depth are just a few millimeters greater than a 13-inch MacBook Air.

Another notebook, another endurance record shattered: the Carbon can last 10 hours on a charge.

Past Carbons have had respectable battery life, primarily because they came equipped with a large internal battery. No exception has been made with this model, and when mixed with the new fifth-generation Core processor, it creates a potent combination.

We measured 10 hours and 13 minutes of battery life in Peacekeeper’s web browsing benchmark. That beats even the Dell XPS 13’s nine hours and 25 minutes, and makes the Carbon the new endurance champion among notebooks without an optional extended-life battery.

Not just the battery is responsible for the system’s excellent endurance, though, as we also measured extremely low power draw. At idle the figure was a mere 7 watts, while at load it reached no higher than 26 watts. This is the payoff from the relatively dim 1440p display, which requires a far less powerful backlight than a 3,200 × 1,800 or 4K panel.

At idle the Carbon is the embodiment of peace, generating almost no audible fan noise and producing barely enough heat to warm the system beyond room temperature.

This is not a passively cooled system, however, and the fan did kick in aggressively during heavy load, producing up to 46 decibels of noise. While that’s quite noticeable, it’s not significantly ahead of competitors. The Dell XPS 13 put out almost 49 decibels, and the MacBook Air (2013) hovered around 45dB.

The fan’s whir was effective, as the maximum external temperature never exceeded 94 degrees. That’s one of the better results we’ve seen from a notebook lately. Only the HP Slatebook and Acer Switch 10, both which are far less powerful, were cooler at load.

The ThinkPad X1 Carbon comes with a standard one-year warranty. That is absolutely standard for the industry. While we’d love to see longer warranties become typical, they’re not, even for notebooks that sell for well over $1,000.

Lenovo’s flagship ThinkPad has aged well. While it doesn’t seem as svelte as it once did, it remains a ruggedly built, quick machine with outstanding portability. There are elements that could be better, such as the display, but the Carbon proved at least adequate by every metric.

Price is the real enemy. The base model starts at $1,079 and our modestly upgraded unit will set you back $1,620. $200 of that is tied up in the touchscreen, which seems ridiculous, but the price isn’t low even with that subtracted. Dell’s XPS 13, an obvious competitor, is $1,400 when similarly equipped and comes with a far superior display. The Apple MacBook Pro 13 with Retina Display is $1,500 in similar guise, and again offers much better image quality.

If you can snipe a Carbon for a couple hundred off MSRP, you’ll have found yourself an excellent deal, and you shouldn’t pass it up. At its retail price, though, the system struggles to justify itself. ThinkPad fans will enjoy it, and so will travelers who need maximum battery life in a thin frame. For most users, the system is a price cut away from consideration.