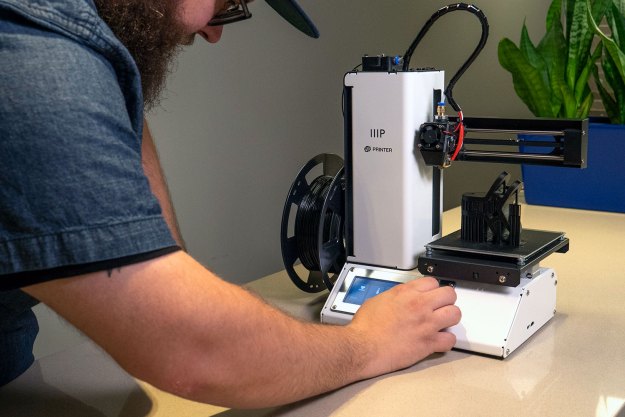 “It's more evolutionary than revolutionary, but Monoprice’s Maker Select V2 still offers a ton of bang for your buck.”

A couple years ago, Monoprice took the 3D printing world by storm with a the original Maker Select Mini: a 3D printer that only cost 200 bucks, and had all the bells and whistles we could ever ask for. Now, it’s back with version two of that revolutionary printer — so naturally we took it for a spin to see how it stacks up to the original.

Monoprice’s V2 builds upon the first generation’s solid set of specs and features by adding a few minor (but important!) upgrades.

Among these improvements is an all metal hot end, which improves heating and helps prevent clogging, as well as a heated/insulated printing bed, which boosts print adhesion and prevents warping.

Along with this improved heated bed, the V2’s build surface also features a special pad material (similar to BuildTak) that promotes adhesion during printing, and also makes parts easy to remove after they’ve finished. Finally, MP also equipped the V2 with an internal cooling fan that helps prevent everything from overheating.

There are also a few things that haven’t changed. Just like the first generation, the V2’s max resolution sits at 100 microns (0.1 millimeters), which is fairly average, but acceptable for the price. Its build envelope is also a perfect 4.7-inch cube, just like it was on the first generation. Again, this spec is somewhat average, but still not bad.

This V2’s setup is quite possibly the easiest we’ve ever encountered.

The all-metal hot end retains the same maximum temperature of 230, which allows you to print with a fairly wide range of filament types, but does limit you from some of the more exotic higher temperature materials. As for inputs and outputs, you can load your models onto the Mini V2 using a Micro SD card, a direct USB connection, or even do it via WiFi through Monoprice’s new mobile app.

All in all, the V2 is certainly more of an evolution than a revolution, but Monoprice’s improvements are smart ones that do big things for the printer’s reliability and overall performance — and it only costs you an extra $20.

The V2’s setup is quite possibly the easiest we’ve ever encountered. It comes completely assembled and factory calibrated, so all you have to do is unbox it and supply some electricity. There’s not even an on switch — just plug it in, and you’re off to the races.

From there, Monoprice’s super straightforward interface makes the remaining setup steps nearly foolproof. Things like loading filament and fine-tuning the print bed are all extremely simple to execute.

To offer a comparison, we’d say setting up the V2 is about as complicated as setting up a brand new toaster. It’s simple as hell, but it might take a bit of fiddling around before you find the ideal settings that result in that perfect, golden-brown slice of toast.

Lifting this printer out of the box surprised us — it’s astonishingly heavy for its size. This is largely due to the Mini V2’s all-metal construction, which makes it an incredibly sturdy machine that doesn’t wiggle around too much during printing.

Monoprice gave everything a makeover in terms of aesthetics.

It’s also pretty easy on the eyes. Most of the V2’s mechanisms are tucked behind its metal exterior and hidden from view, so the machine doesn’t look as rudimentary and utilitarian as some of its competitors. Better yet, despite the printer’s sleek design and tucked-away components, its inner workings are still easily accessible.

To be fair, we never needed to tinker with the V2 at all during our testing process, but accessible design and easily-replaceable parts are something we love to see on a printer. Ten points to Gryffindor Monoprice.

Monoprice scores high marks in this category. Both the onboard software and desktop-based slicer programs are wonderfully simple to use — though the latter isn’t necessarily thanks to Monoprice.

As with all its printers, Monoprice’s Select Mini V2 is designed to work with whatever slicer program (the software that translates your 3D design into instructions a printer can follow) you desire. We used Cura: one of the most powerful and customizable slicers on the planet, which now includes pre-configured profiles for many of MP’s most popular printers. This makes the whole process extremely convenient, as you no longer have to manually configure your machine.

The onboard user interface similarly straightforward, and hasn’t changed too much since the first generation. The V2 boasts the same knob-based navigation scheme and the same intuitive menu trees — but Monoprice gave everything a makeover in terms of aesthetics.

Suffice it to say you won’t have any trouble using this machine.

Don’t let the price tag fool you — the Select Mini V2 prints like a dream.

Our first print using the Mini was the infamous ‘lucky cat’ model, which Monoprice pre-loaded onto the printer’s SD card. Unsurprisingly, it turned out great, since most models like this are fine-tuned by the manufacturer. So in order to get a better idea of how the V2 performs, we ran it through our standard suite of benchmarks.

The first of these, as always, was the 3DBenchy: a tugboat-shaped torture test designed to highlight a printer’s strengths, weaknesses, and quirks. Much to our delight, the Mini V2 did a fantastic job. No matter what parameters we set, the tugboat always came out clean, accurate, and very consistent from layer to layer. Some of the superfine details of the boat didn’t come through as clearly as we’d like, but it’s worth noting that nearly all FDM printers struggle in this area, and the Select Mini V2 performed just as well (if not better than) as most printers that cost 10 times as much. Other tricky elements, like steep overhangs and unsupported spans, were also reproduced without any significant errors.

After a couple weeks of printing random (usually Star Wars-related) objects we found on Thingiverse, we found that the Mini V2 is also quite reliable. Whereas some 3D printers leave you feeling worried and unsure if they’ll complete the job, we felt highly confident with this machine.

The only real drawback here is the V2’s relatively small build envelope.

Thanks to the printer’s heated bed and solid construction, it doesn’t often fail mid-print — unless of course you make a slicing error and prepare the model improperly. This printer is still bound by the laws of physics, so we definitely recommend printing with supports unless you’re certain you don’t need them.

All in all, Monoprice’s new-and-improved Select Mini earns high marks for performance. We did experience a few flubs, failures, and funky-looking prints, but these were the exception, not the norm. The V2 prints just as well (and in some respects, even better) than printers with far larger price tags. The only real drawback here is the V2’s relatively small build envelope, which limits the range of objects you can create with it.

The Maker Select V2 is definitely more of an evolution than a revolution — but in this case that’s a good thing. Monoprice didn’t need to reinvent the wheel with this machine, and thankfully, it didn’t try to. Instead, it threw on some new tread and made a rock-solid product that’s better than the original — and the original was already pretty great. The V2 might not be the best 3D printer on the planet, but you’ll be hard pressed to find a better blend of price and performance.

If your main concern is getting the most bang for your buck, then look no further. You won’t find this many features packed into such an affordable package anywhere but Monoprice.

If $220 is too steep for you, we also highly recommend the MP Mini Delta, which is about $60 to $70 cheaper, but does have a slightly smaller build envelope.

If build area is your main concern, then we’d recommend checking out the Monoprice Maker Select Plus — arguably one of the best printers we’ve ever reviewed. In terms of print performance, it’s nearly identical to the Maker Select Mini V2, but it does have a far larger build area that allows you to print much bigger objects. It also has a touchscreen, which is nice.

If you treat this little guy well, it’ll likely give you a long life in return. Due to its all metal construction, durable components, ample replacement parts, and Monoprice’s continued software support, the Select Mini V2 seems well suited for a long life on your desktop.

Yes, yes, a thousand times yes! This printer offers a near perfect blend of price and performance, so if you’ve been waiting patiently for an affordable printer that doesn’t suck, then your time has come.